Please post the issues you find in this thread. If possible include:

So, The demo version means that will be Preorder button and only I4 engine?

I don’t know if you guys planned to fix the gearbox crashing bug, but it seems to still exist.

Jupp, in B1352 everyone has just the demo, even if you launch via the “Play Game” button.

I’ve got a bug here. Switch from monocoque to ladder frame after selecting the options for suspension. You’ll get this.

Soooo…it means that in this version we loose all the models and engines that we had?

Only the platforms and models. Engines can be recovered by loading and saving them again.

i´ve noticed that only 2 of 10 engine´s was left in my sand box…can i recover the other 8 has you said?

That’s probably because the other engines are Inline 6, V8 or have turbos. In B1352, only demo content is unlocked. That’s a bug and this will be fixed soon (see some posts above). Then the old engines will reappear and you can load and save them again.

Cam was set to 50, VVL was set to 80. I had previously been editing a prior engine, then switched to this one.

EDIT 2: It’s VVL, works fine without, works once with, crashes on second try.

EDIT 3: Happens with new engines only, old ones work fine.

That’s probably because the other engines are Inline 6, V8 or have turbos. In B1352, only demo content is unlocked. That’s a bug and this will be fixed soon (see some posts above). Then the old engines will reappear and you can load and save them again.

Not really a bug, but still worth reporting. When the game is set to imperial speed units, the “detail stats” screen still shows “hundred time” instead of “sixty time”.

Maybe we should just call it “acceleration”.

Nice pick-up there. Probably should just be called “Acceleration”.

Yeah, “Acceleration” is good. Or the name could change based on the selected units.

When you choose this body:

Regardless of the color, a section on the bottom-front will be pink.

I have tried this with other colors, and the bug is still there.

If you choose Ladder with rear double wishbone (Transverse/Longitudinal doesn’t matter) it will be grey like the monocoque, but should be black like the rest. More funny, less a bug: If you choose one of the options like front and rear double wishbone for ladder, it will not change the models when switching to monocoque. It only replaces the middle immediatly and the rest as you choose again (Bug 3).
You can also see that the body of the hatchback (or what the old timey one’s called) clips through the Kardantunnel. 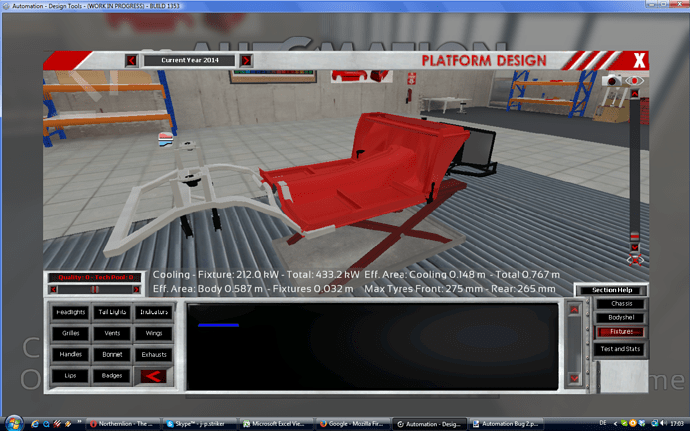 The new bodies also break if you try to place basicly anything (e.g. grills or lips) on seems. I guess they just aren’t optimized for it yet totally. 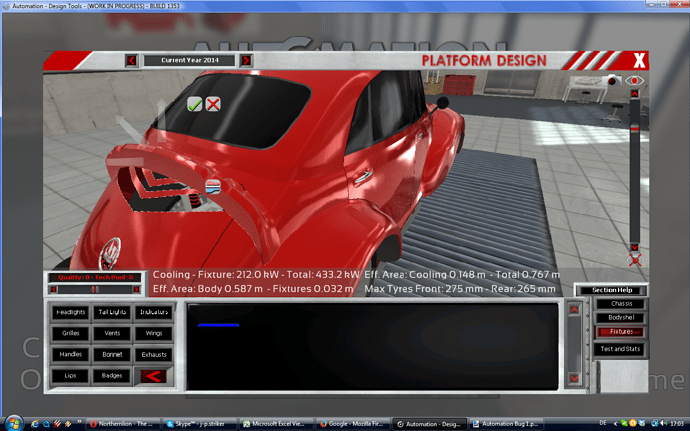 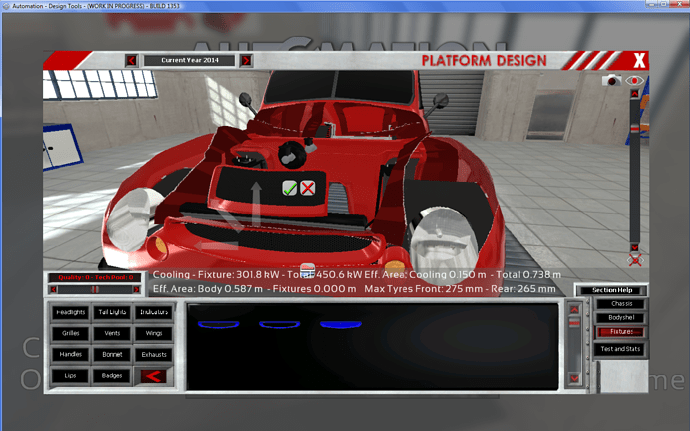 A thing that might just occur for me: If you are in manual Testmode and click Start it changes to Stop and won’t switch back until you go to the dyno run and click “Stop” (Start) and then Skip. It happens everytime without fail. The functionality is normal though, it starts although it says Stop all the time after the first one. (Has been there since 1323 for me)

If you test the Springs/Dampers with + and - the rear axles don’t keep up with the wheels and get out of sync. Haven’t tried any setup different from double wishbone yet, but I have to assume that the mistake might have carried on.

But most of these are very obvious, though I hope I did tell you some new ones. I’ll come back if I find more.

(Also just ignore the taskbar on the bottom, for some reason the window went out of focus while “printing”. You may or may not contact me on Skype if you are a woman between 18 and 23 XD.) Any Northernlion-Fans around?

Hey, I’m running B1353 and If i stay in the engine builder for more than a minute or two the game freezes. the only way to get out of it is to completely turn off the PC and turn it back on again. There are no error popups or anything. I’m running windows 8 and I updated via the Patch exe full download not the torrent.

[quote=“Jakgoe”]When you choose this body:

Also in that model there’re some glitches with the headlights in the upper zone (it seems that there’s a wall/panel behind).
If you place some fixtures close to the bonnet or the bumper then shows a hole around/below that fixture . 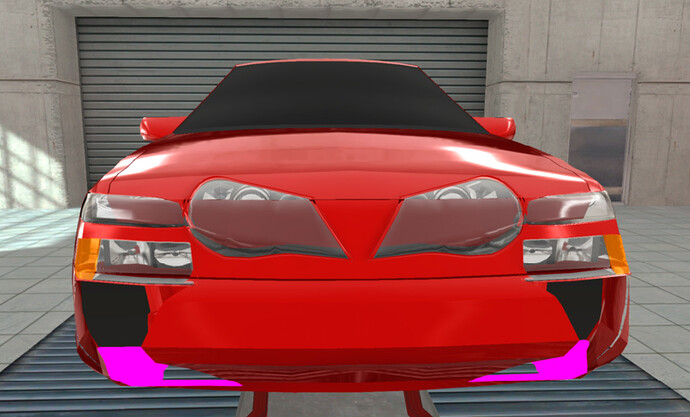