Hi guys, I’ve got something for you that I think may fill a certain gap in the track roster, and one that you’ll hopefully enjoy. 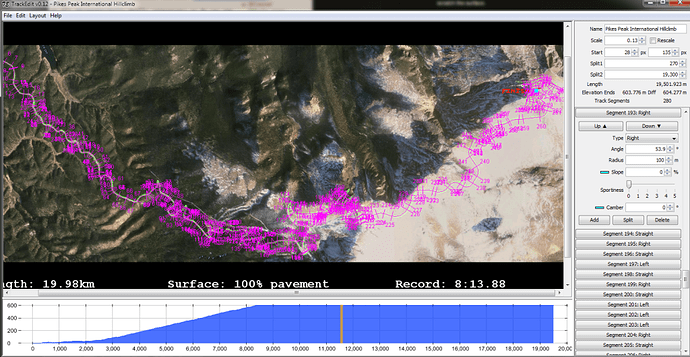 [size=85]Work in progress image. Tweaking everything upon rescaling was quite the task! Then again for elevations… and so on and so forth…[/size]

About 8 months ago, just when we were starting to develop tracks, I asked if somebody was making Pikes Peak. Somebody said to me please don’t do it just yet, they were going to try. Of course, we didn’t even ElSaico’s track editor then, so it would have been quite the impossible task. However, BitTwiddler’s very nicely uploaded a Javascript editor for us with a handy interface, so I thought I’d really give it an extreme road test. Therefore I present to you the Pikes Peak International Hillclimb course!

19.98km, 156 turns, ascending 1438.66m… and the track changes elevations so frequently had to split most of the segments up further into subsegments. I tried to get as best data as I could using altitude.nu, but given the rapidity of the changing elevation in spots it got confused and I had to cross-reference with the onboard footage from Seb Loeb’s record run. Incidentally, if you’re finding your car is a bit quicker than you expected, given the current record for a stock production car is a Porsche 996 Turbo that did 11:14, that’s because all your cars now have a Seb Loeb behind the wheel, seeing as I also largely emulated his racing line xD

In 2012 it was entirely paved so that will be the format used, though feasibly a pre-2012 version could be made by finding a map with the unpaved areas and maxxing out the road rating in those segments. I’ve made some adjustments such that despite being a very windy track, NA engines do not necessarily have an advantage, which in real life is due to the loss of power they experience at higher altitudes (though there’s no real way for me to simulat that here.) Given the current build (1418) has very limited aero, you can forget about beating Seb Loeb’s time, but you can still put in times comparable to other real world runs.

Also, note that this simulates turning in from a side road just after the Crystal Lake dam bridge, so you get a flying start. You can actually clearly see the designated start line on satellite view! The real time for the proper race is the Sector 2 time only.

Okay, that’s all, have fun! Oh, the release of this map also comes with a simultaneous tournament to commemorate its release! Go check it out!
Pikes Peak Hillclimb.zip (1.24 MB)

Wow! great job, I don’t even want to know how long that took.

So you did! That was back in November too, I didn’t see it because, as Kristina said, the BSLL was going on.

Wow! That took a lot of work, I’m sure. Thanks for taking the time to do this one. I really need to get to work on that list of mine, I guess.