Yes, I know, Automation has their own fictional countries, but upon playing the game, and interacting with it, I felt like something’s missing. I felt like Automation-verse, at the moment is a bit too focused on the North America, Europe and Western Asia at the moment, and I felt like the other half of the earth isn’t properly represented in the game.

And here it is, three new countries, I randomly made up just to fill that gap. Obviously, it’s just an idea came out from me, and with my limited skills on geography and what not, there’s probably some issues never heard of. Any improvements, suggestions and contributions from the community to the project are encouraged.

Ariya is an island country located to the easternmost part of the map. The country is well known for it’s hills, volcanos, and exports of technological and cultural products to the globe.

Despite being the smallest of the three countries, Ariya is the wealthiest nation of them all with well-maintained, curvy, twisty roads, and excellent infrastructure. The people in the country loves premium cars, preferably smaller ones, with a focus on comfort.

The nation is also well-known for its car culture, with it’s strong tuning culture in the country. Automobile racing are also very popular in the area which comprises of things like drifting, touge, and time attacks.

El Camira is a country located in the middle of the map. With the heat and the rain of hot tropics, the country is a main exporter of agricultural goods, although rapid industrialization on the recent years means that the country is starting to become more developed.

Despite this, infrastructure on the country is kinda “meh” at best, with urban areas having better maintained roads and rural areas only have access to poorly maintained ones. Small, cheap, roomy and reliable cars are the mainstay of the El Camiran market.

However, the country hosted several racing events like rallies and motorbike racing, and the popularity means that famous racers are made from such events.

The largest of the three countries, Monbassa is a country known for its savannah landscape and the abundance of wild animals and resources. Despite its richness in natural resources, people are often poor due to economic issues, and some of its population are even struggling to get basic stuff like food and water.

Thanks to it’s lack of progress the roads of the country are often poorly maintained. Car purchases are often rare due to low living standards, but those who can bought cars focused on offroad capability and reliability thanks to it’s bad roads.

Car culture in Monbassa are basically a smaller affair, since most car owners there are often richer people. Auto racing are limited to smaller events, due to this.

Great idea. By the way, Ariya brings to mind a wealthier version of Fruinia; Monbassa reminds me of a larger, more primitive version of Archana. El Camira, meanwhile, has elements of both.

From what I’ve seen so far, all of your suggestions would be great additions to the Automationverse. However, each of these countries should also have a different range of fuel types. Ariya would most likely have 95 RON as the minimum fuel type due to its immense wealth, with 100 RON as the absolute maximum (and possibly even commonly available for good measure). El Camira would have the same fuel types as Fruinia (85, 91 and 95 RON); Monbassa would just have 85 and 91 RON available, as Archana does.

Thanks. TBH I’m more inclined to make 91 RON as the base fuel for Ariya considering that Japan and South Korea starts at 90/91 RON for their “regular” fuel.

Alright, here’s some more information about the areas, I guess.

Notable racetracks on the area: (WIP)

Some non-car related info, because why not?

If this ever goes through I guess that I have to rewrite IP history - it could suit as an Ariyan company and I would feel more comfortable with a fictive country inside Automationverse than with something made completely by myself.

me reviewing an IP car about to have to re-write the whole article: panik

Hahahaha, no don’t worry, hehehe. The countries still does not exist in automationverse officially AFAIK. And if it still makes you nervous, country is maybe not so important for the review, I don’t know.

to be completely honest, i don’t really know just what to write, the pandora is just similtaniously so bland and yet so exciting that words can’t really describe it. It has a very certain feel that i’ve just never had or felt in any car before. i must say sir, it’s incredible!

Well, if it feels so special because of reasons like this, you have already mentioned lots of stuff to base the review around.

Not every car can be extravagant and if it still evokes feelings and that makes it stick out from the crowd in itself, well, write it.

And don’t panic and don’t worry if it will be good enough, you have already written an excellent review, which means that you, 1. Knows how to do this and 2. Don’t need to raise the bar every time, sometimes good enough is just, well, good enough, wheter it comes to cars or reviews of them.

It also would be a policy that sometimes should be applied to forum challenges since some of them seems to take forever nowadays because of the bar being raised too high, and becomes higher for every time, and I think many people would prefer them to be a little bit rough around the edges rather than to have to wait for months for the results to be out. I am not blaming any certain individual, but I made the mistake myself once to give up on a challenge that was just too much so I know how it is.

But this discussion is drifting kind of offtopic, and also, I don’t want to discuss the review much more since I still want it to be a surprise, just wanted to push you out of the writers block, for your sake more than mine.

Wow, its a while since I’ve actually did anything to the thread.

Anyway, here’s some concept flags for each of the countries I’ve made a while ago. Anyone is free to use the flags for mods and stuff, and improvements can be made as well (just remind me for anything, btw 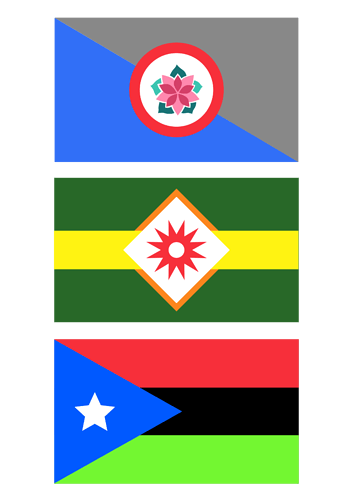