Reguarding the possibility to drive the cars your self

Do people in here remember the game “Street Rod” from 1989?
youtube.com/watch?v=EnPJU8ERC-I

I understand that it is hard to build a fully blown car simulation, so I just wondered if it would be possible to just add a drag racing feature in the game seeing as that wouldn’t require that much work as you would only have to drive in a straight line.

You guys could at least start there, and build the fully blown simulation ( if it goes that far, hopefully) after the implementation of this.

What do guys in here thing of this?

EDIT:
Another example of this, or what you could do is:

Forget about the steering wheel. And only add the drag race in the form of controlling the throttle for take off and then we would have to time the gear changes to hit the maximum torque and HP ranges.
You could make us look at it from the side, think Trails HD for instance. Or to be honest, the graphical representation wouldn’t even be that important.

It would be cool to build powerful engines that would only last us a couple of drag races for example.

[quote]1. Will you be able to drive your cars?

This is probably the most common question we get asked!

As a 2-man team this is already quite an ambitious and complex project as is, and we’re dedicated to making it high quality, realistic and fun.

To do a realistic driving simulator would take a lot of money and many years of work on our part.

We may consider providing tools to export cars to another Race Sim though, but that isn’t a key feature of the game and may not make the final cut.[/quote]

And driving in a straight line wouldn’t be much fun I don’t think.

What we MIGHT have is getting to watch your car do some tests, but that isn’t planned yet

Since its multiplayer to some degree. Have you guys planned for some competative automotive sporting?
Build racing cars for rally and such? And have stats tell the victor?

Driving in a straight line was perfectly fine in Street Rod, seeing as the gameplay wasn’t really focused on that, just like it wouldn’t be in here.

With all the possibilities in this game regards to the engine tweaks, I at least would appreciate a way to test the car. And I guess the easiest way for you guys to do this would be to make it as simple as possible, a drag race track, or a drag race feature. Maybe pink slips bets against friends, or times online. A nice profit for your company, and it would give us a small rush as well, if a car you’ve spent some expensive hours tweeking was on the line.

Yeah, the way we’d probably do it is taking your car to a test track, doing drag runs, skidpan G tests, slaloms, track times etc. (you’d just watch it, but it’d all be based on the cars stats as to how it performed and what it did), that probably wouldn’t be TOO hard, so its a feature we might try for (we aren’t promising it’ll be in the game at first, but it should be possible to add at some point)

In terms of driving, we really do want to do it properly if we’re doing it.

It would be a nice starting point then. Get the physics working in a straight line, and then build upon it further once that is nailed.

The hardest thing I guess would be to build tyre physics though, but that wouldn’t be necessary. At least not right away if you guys would go that direction.

Yeah, bascially we’d prefer to just do simulated tests where you don’t drive.

If we were to do driving, we’d spend a whole bunch of money on licencing someones race sim game engine, writing racing sims really requires hardcore physics guys and tyre experts and that kind of thing.

So basically, If we make a ton of money, we’ll add a great race sim component!

[quote=“gnugfur”]Since its multiplayer to some degree. Have you guys planned for some competative automotive sporting?
Build racing cars for rally and such? And have stats tell the victor?[/quote]

We want to to an expansion thats all about running a factory race or rally team using the cars your company makes, and building homoligation models to sell to the public, managing your race team etc.

If we do OK financially out of Automation, then that would be our next project!

but can not be a driving simulator, some type of test or tests as braking or acceleration slalon etc would be great to give the simulator realism

Have you guys ever used CarTest? It’s an old program but I think it would be a great model for this kind of feature. 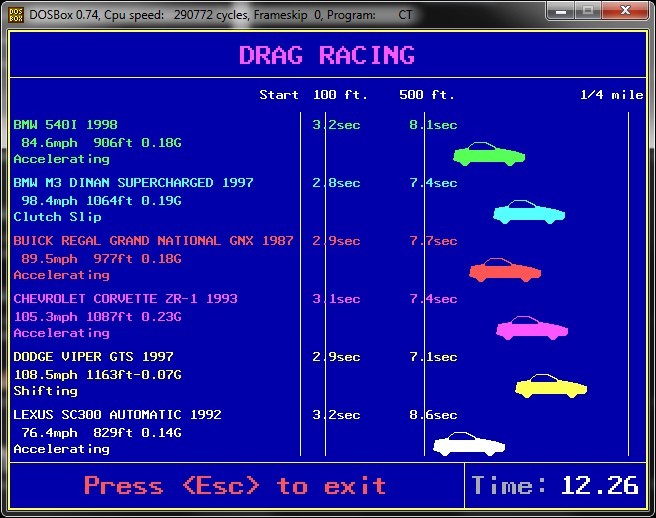 I have the newer, Java-based version of this… CarTest 2000. It’s awesome!

What if we could import our cars into TORCS? Great free open source game.

Another example of this, or what you could do is:

Forget about the steering wheel. And only add the drag race in the form of controlling the throttle for take off and then we would have to time the gear changes to hit the maximum torque and HP ranges.
You could make us look at it from the side, think Trails HD for instance. Or to be honest, the graphical representation wouldn’t even be that important.

It would be cool to build powerful engines that would only last us a couple of drag races for example.

That really seems like something that’d take our attention away from the core game we’re trying to develop here.

I cant see how this would take attention away from anything? You either build engines and cars for the company you are building, or you build the best, fastest engine just to show of, and this would just add to the “showing off” aspect of the game.

Another way to beat your friends, or another list on the forums to climb.

My point is that the game as we have it planned is already a massive beast that will be a challenge for a small team to polish up to the standard that we want to, and adding features like manually controlled drag racing will just take even more of our time away from the core task of making a good quality car company game.

Ahh, well I wouldn’t mind if this was something to be added as an DLC or something like that after the main aspects of the game was finished.
And I think this probably would be easier and faster to implement then building support to export everything to a 3’rd party driving simulator.
If you want, I could even model the drag strip for you for free.

I just feel that it would be fun to have a way to test your engine in a more direct competitive way. Both with your own build engines, and in leagues where you get a pre-defined engine where you compete with your timing only.

I’d say its pretty unlikely to happen to be honest, we already have enough stuff we could add as DLC to last us for years of work if we wanted, and even finishing the main game itself is a huge task, the last thing we need is more features at this point