Welp, my first forum official thread so, here I go.

Here I Will not only post a photo about the Cars I’ll made, I Will post some bit of a Lore too, explaining things about my builds, because, why not?

I Hope y’all enjoy my Cars/Lore/etc.

Also, feel free to post your builds, if you want/its necessary/etc etc.

Here’s one of my lastest creations, the 1994 Grayson Havoc Twin Turbo:

In 1991, the German car manufacturer Reiter, was developing an engine for the British car manufacturer Grayson. It was a basic idea, making one of the most fast, confortable and technologically advanced Grand Tourers of all time, and of course, they failed.

Not only the car was safe, fast, and advanced in terms of technology. It wasn’t as Cheap as It other competitors and It wasn’t very Reliable at all.

Only 4 Road Cars were made. One of those 4 exemplars was crashed and destroyed in an accident.

It was the last car that was made by the Grayson Car Company till the Dead of his founder in 1999, Tommy Grayson.

Only about one year later in 2000, the Grayson Havoc GT LM, won the LeMans GT2 Category just before Cerberus-Racing announced that they Will leave the FIA GT Championship that same year.

Grayson Car Company maintains all of the Havocs that raced in LeMans on the GT2 Category in a museum, but that’s a topic we will Talk about later. 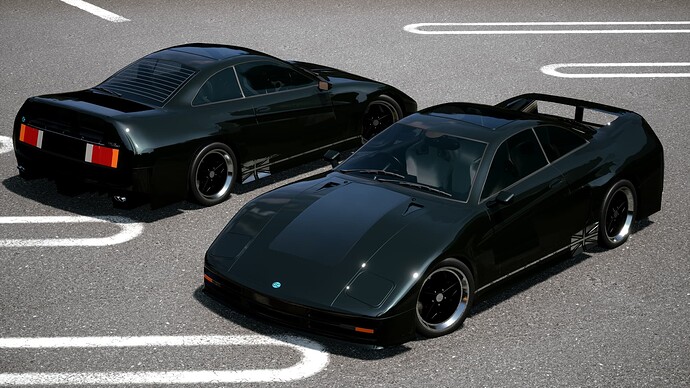 Nice integrated spoiler. Overall good presence, but some decails could use a little refining. Mainly the lights.

Yeah ig, I was planning to make the GT2 Variant, so the pop ups will be replaced by some normal headlights

Back in 1990, the German car manufacturer Krüger, wanted to have a Sporty Luxurious GT on their own, so they came to their sport Division to make that idea, a reality.

They came to their sport Division called Reiter, Reiter was famous of their job with some Krüger “sportscars” like the rear engined W1300 Coupe.

So, they managed to make a 5 seater, Luxurious and technologically advanced GT, powered by the same engine of their main sportscar on Its highest trim, the Vector 182 Turbo.

A 3 litre Twin Turbocharged Flat-6 making around 270 HP in 1986. They managed to pop the power Up to 280 horsepower, which It stills be an amazing amount of power for that era.

With Leather power Seats and an advanced AWD system, the Reiter X-V 3.0S (eXperimental Vehicle) was ready to roll. But, It highest Price was one of it problems.

Nowadays its very uncommon to see one of these on the streets, its more common to see them on car auctions websites and old early 90s photos. 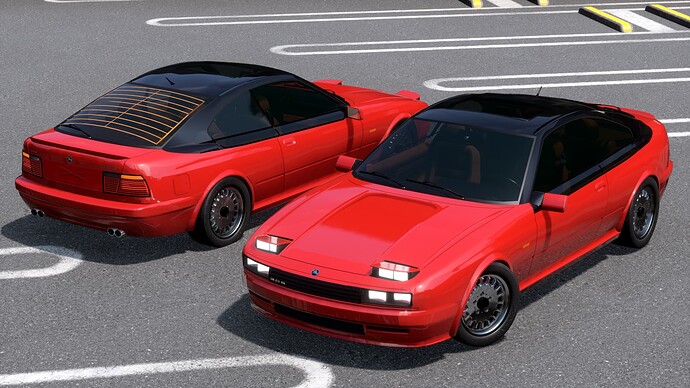 Grayson is back, and better than ever.

The all brand new Grayson Havoc Super, its fast, its light, powerful, but the most important thing, its that its back.

Powered by a Twin Turbocharged 5 litre V12, making 830 horsepower with a intelligent AWD System, this thing can go 0/60 in less that 3 seconds, 2.6 to be exact.

This all brand new Supercar made by Grayson, was made with the help of the Italian car manufacturer, Salvatore, that made some stunnishing looking Cars back in the 70s and 80s.

The 2019 version of the Havoc, its a mid mounted, AWD, V12 supercar, aside from its 90s version, that that was a V12 Supercar, with a FR configuration.

And yes, It isnt the fastest production car with four Seats and a large displacement V12 like the one on the 90s, but It stills a great tribute to the company itself, that they obviously needed a new car to sell.

And now, the Havoc Super its available to buy, and now its Price wouldnt be a Inconvenient, one of the Weaknesses of the Model of the 90s.

So, what are you waiting for? Get yours before they are history. 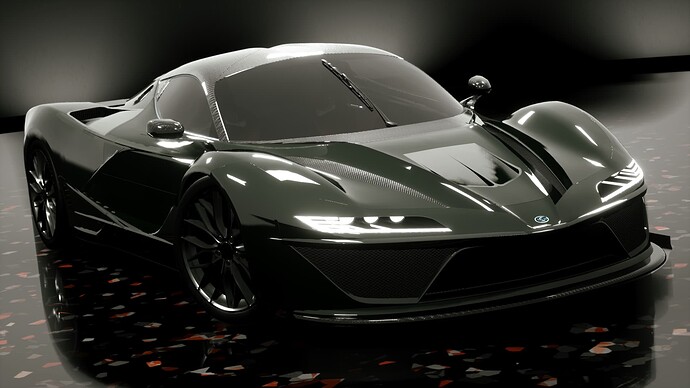 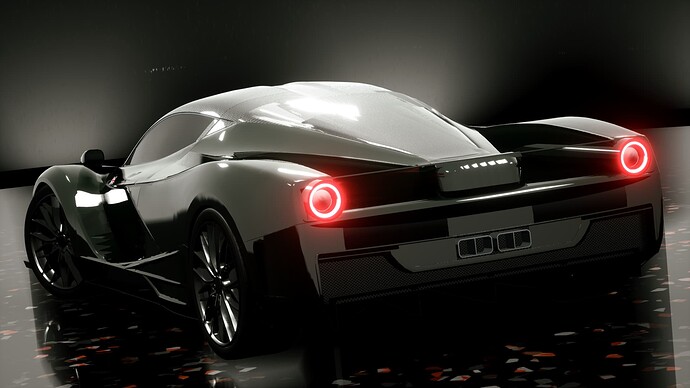 I know that the car looks very basic, but well, Im not used to make modern cars tbh, any tips and suggestions are allowed for future creations btw

The rear of the newer Havoc looks somewhat bare-bones and unfinished in comparison to some designs made using the same body (specifically, the LaFerrari-esque one) in that size. However, the front end looks better, although it too deserves a bit more polish. Even so, there is no doubt that the new Havoc has the firepower to, erm… wreak havoc on its rivals.

Grayson Car Company was founded on 1963, with an only and clear objetive, winning races.

Tommy Grayson was his founder, born in 1931 on Doncaster, Great Britain. And its considered one of the greatest Formula 1 drivers of all time. With the stunnishing amount of 2 world Championships on his Career.

But then, on the early 90s, he, with 62 years Old, decided to build, to create, to perform, one of the greatest race Cars of all time… And he did… But sadly… he didnt even knew about that.

The Grayson Havoc Twin Turbo was, a truly 4 seater supercar from the 90s, with a Twin Turbocharged 7 litre V12 developed by Reiter, making 570hp on the street Spec. Then the Grayson Team made his Magic on one of the Roadcars, and then, they made a monster.

Instead of using forced induction, they kept the car naturally aspirated, due to Reliability issues, but that didnt stop the car for being powerful at all, the GT LM Spec made around 730hp, which was an impressive amount of power for that era.

The car Raced in the FIA GT Championship, on the GT1 and the GT2 categories. And It won only at the year 2000, on the GT2 Category.

The Cerberus-Racing was their main enemy, with their brand new Thunder from the 95, they were unstoppable, winning 2 consecutive years on the GT2 Championship. But that’s a point that I Will Talk about later.

Sadly, the skilled F1 Driver and Founder of Grayson Car Company, passed away on 1999 due to a heart attack, at the age of 68 years Old.

He didnt knew that their Team won the Next year Championship. It was a very hard blow for the motor world. They made a commemorative plaque for him at the school where he studied, in Doncaster, Great Britain. Dedicated by one of the best drivers of that time. Tommy Grayson 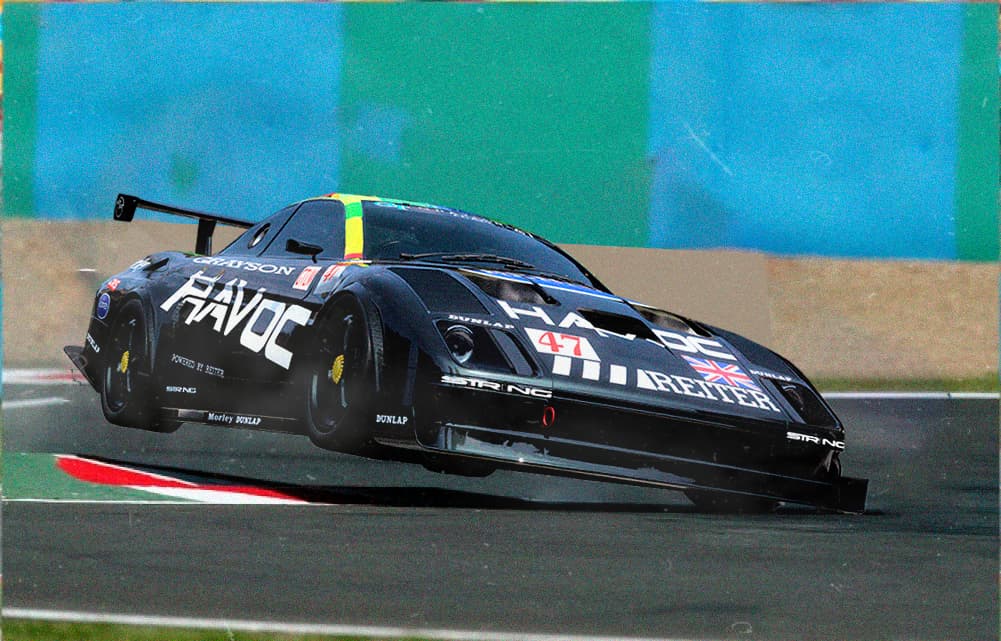 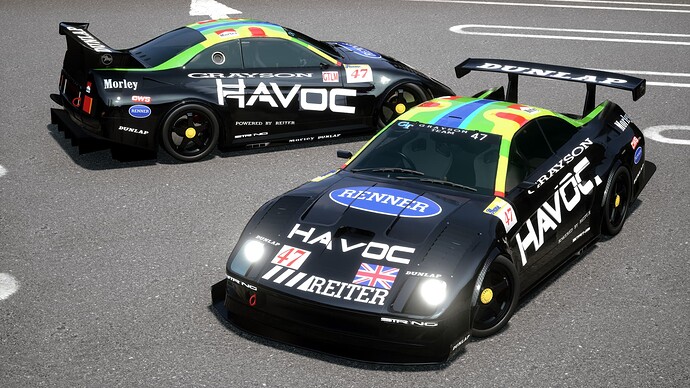 In 1996, the French car manufacturer Ottilie motors, wanted to revive their World famous compact vehicle, the Lutecia, with a brand New generation. And of course, a very sport version of it.

They called it the Lutecia 2.0 Sport, with a 2021cc, naturally aspirated, Dual overhead camshaft inline 4 engine, that made the High amount of 181hp. 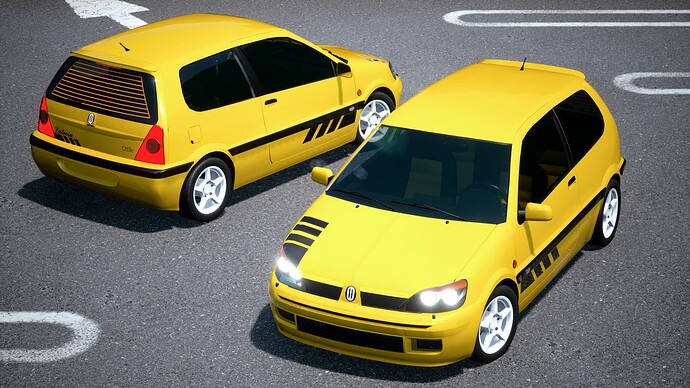 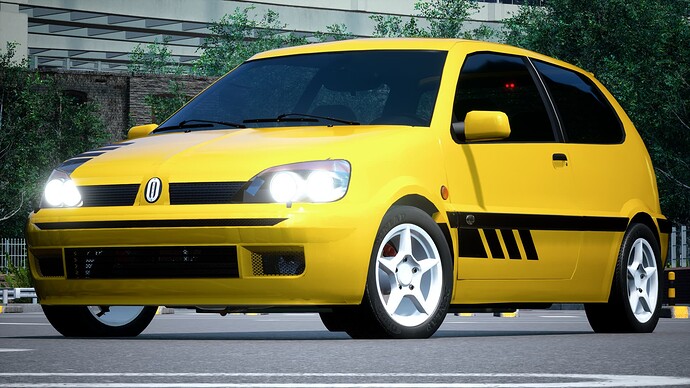 “It’s the 1990s, you have a lot of money, and you want a car that adheres to your social status, but you don’t want a grandpa car either. Well, the Hellenbach GT is your answer.”

The development of the new luxury sports sedan that Pegaso had introduced in the mid 70’s, since its alliance with Krüger Automotive, began in 1987, one year after Group B closed its doors, never to return.

Pegaso launched the new Hellenbach with a wide range of engines from the renowned German brand Krüger, from 1.9 liter inline 4 engines to 4 liter V8 engines, and with intelligent all-wheel drive systems.

But there were GT models fitted with AWD, 2.2-liter in-line 5-cylinder engines, with forced induction systems, delivering around 205 horsepower which, although they were very obsolete engines of Pegaso origin, were still robust and powerful.

The latter being a tribute to his victories in the World Rally Championship.

The huge sedan of the Spanish brand weighed around the figure of 1.560 kilograms, its weight was due to the luxury components inside, and the all-wheel drive system, which kept the car always on the road. 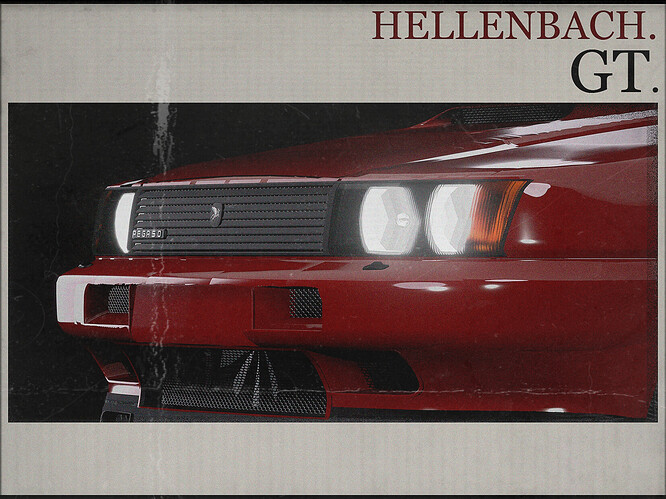 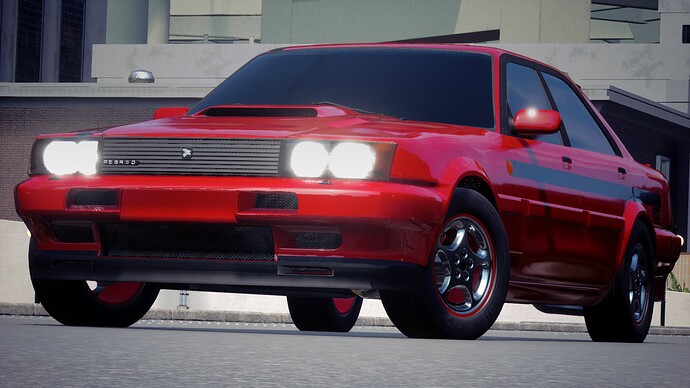 A highly tuned rocket engine, on a sober 4 door shell… with the locks of a shed

Made by @Secrane and me 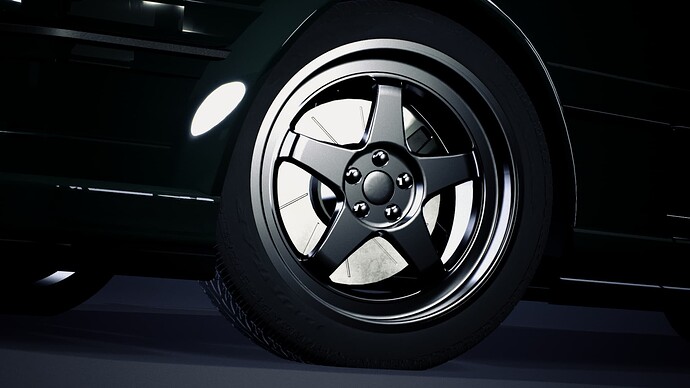 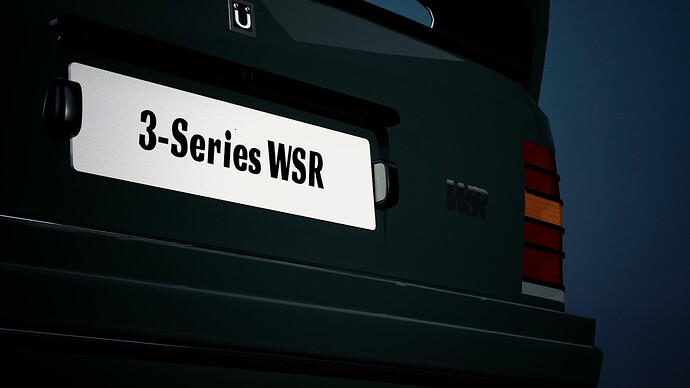 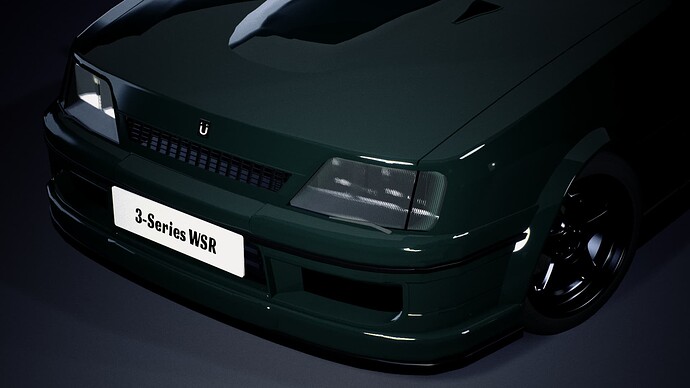 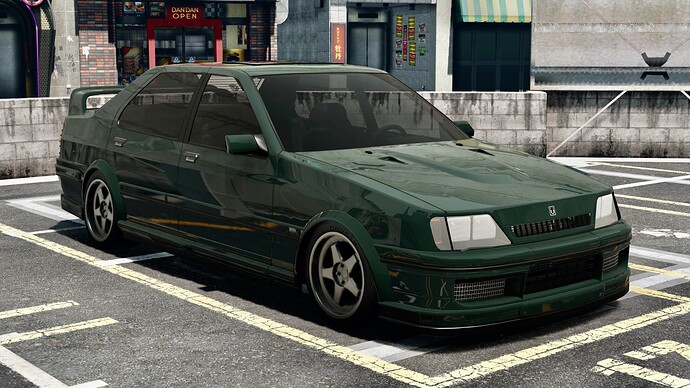 The WSR reminds me of a Lotus Carlton, but with a more angular shape reminiscent of an E36 M3 - and the spoiler’s big enough (and the exterior color green enough) to be dead ringers for those found on the GT special edition. As for the Hellenbach, it looks like it has enough presence alone to take you to hell and back… in one piece.

Ah yes, the glorious and bittersweet 80’s, the time when kids smoked cigarettes and sports cars were turbocharged boxes gliding over European dirt.

In America, however, things were a little different. Engines were twice or three times as big compared to European engines, much less powerful of course. And the suspensions were shaky as hell.

There were, however, some semblances of pure sports cars from this part of the globe, such as the Starfire Turbo from Rhapsody, or in this case, the Archer 320 Super Coupe from Sunstar Motors.

Used all over the US by criminals, small time gangsters and rich daddy’s boys. What are you waiting for to take a spin in this amazing machine? 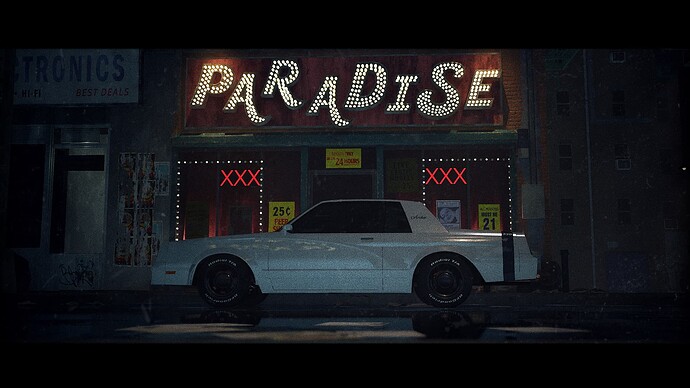 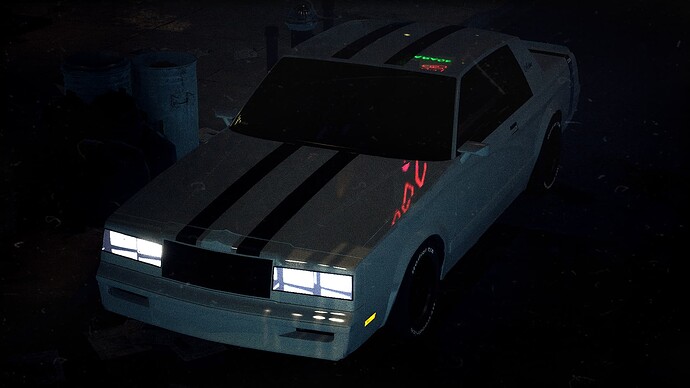 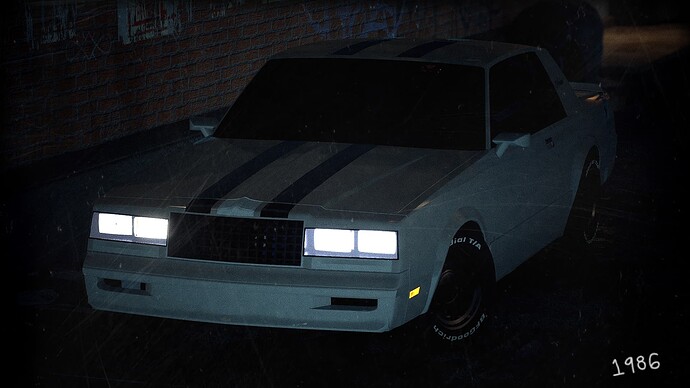 Salvatore engineers are famous for several things, for being the ones who design luxurious Italian sports cars to be bought by pretentious assholes with money, and for making engines so small, they would be the work of a watchmaker rather than a mechanic.

Inspired by the classic Masseria GT of the late 70’s, the Angelo GTS (in honor of the son of the founder of the brand Massimo Salvatore, Angelo Salvatore), is a refined Italian sports car, whose mission is not only to make you think you are Mario Andretti (and then crash violently into a ditch at 200km/h).

But also, to satisfy your deepest driving pleasures, a pity that this experience with 4 wheels and a tiny V12 engine costs about 200 thousand euros. 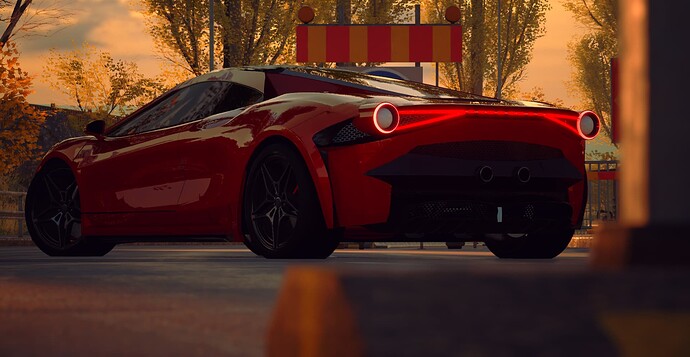 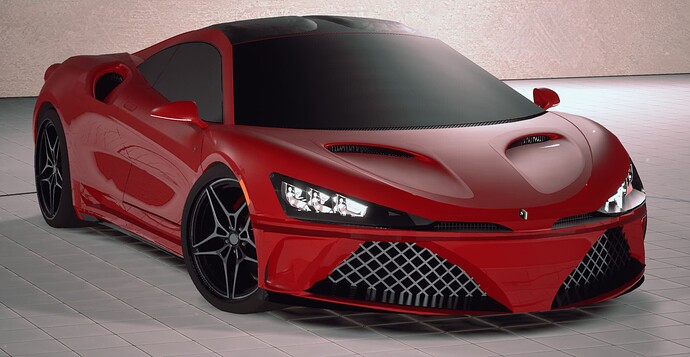 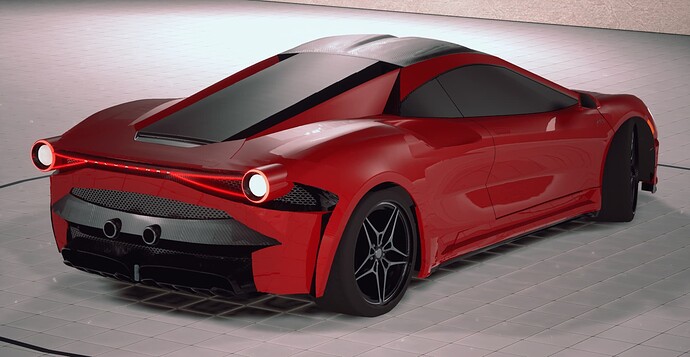 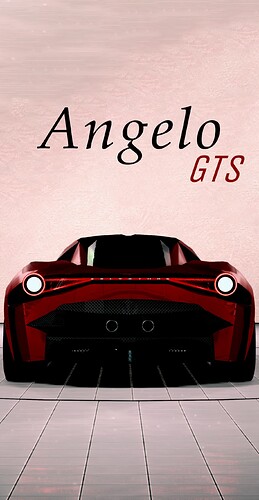 So it must have a low displacement but lots of revs - I’m thinking around 4.0L or so. If it’s turbocharged then it makes 700-800 horsepower at minimum; if it’s naturally aspirated (as the GMA T.50 and T.33 are) it could make up to 600 horsepower.

Its more quirky than that, 3.3L of displacement and in fact, it is naturally aspirated! It makes 460hp and it revs all to 12k rpm, sounds a bit unrealistic but well, I still gotta made a track focused version with a fixed wing, lightweight wheels and more! 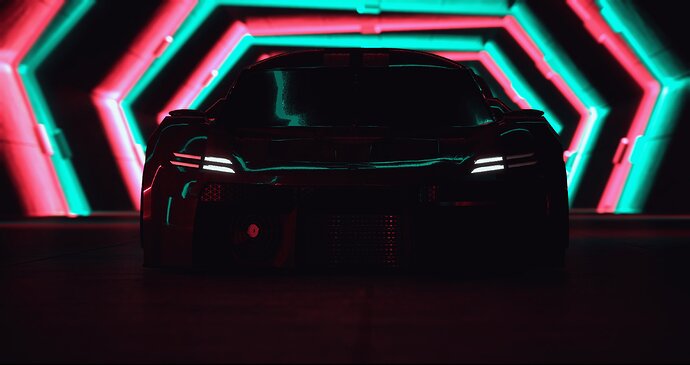