I must also admit that either Fore is great value for money and a fine drive, especially in Eagle trim, which is a real giant-killer! It was developed before the Birdie, though, and it shows.

Perfectly pitched. The Birdie is indeed the “afterthought” where the Eagle GTi is the mainstay. Its strengths and weaknesses that Gavin so accurately captured are somewhat modelled after the 9th Gen UK Civic Hatch: same strangely disappointing power to eco ratio, lazy auto with long gears, strangely deficient rear legroom and teeny rear doors, but also really nice and pleasant to sit in and drive. The main point of difference is that it has alu panels so it’s lighter. But also a bit more expensive than the entry-level it aimed to compete at, which is why it’s the afterthought: it can’t really make up its mind because it is in essence a heavily detuned, toothless Eagle. You’d get it if you were struggling to eke out a little enjoyment in your commute in a life dictated by practical concerns and people wanting you to get a car with all the amenities so they didn’t have to suffer, a situation I know very well. As a result I would expect the Birdie to sell about as well as the 9th Gen Civic Hatch, which is to say, not particularly, especially since the hatches of 2017 are so damn competitive I wouldn’t be surprised if rear leg room was actually a major determinant in market share.

As for the Eagle, well, it’s pretty much been said. You might ask “why not just make it FR, MR or AWD, anything but FF” but, again, like the FK2 and FK8 Type R, that’s precisely the point and Armada simply won’t do otherwise, because they have cars in other formats already, duh. This is out to prove that FF can do real sporty, and for that to happen it had to be light.

With markups accounted for, you can get the Fore Birdie for under 17k AMU, and the Eagle GTi for 27.7k AMU. The latter is expected to compete with sport cars in the 30-35k AMU bracket.

The question now is, where next for Armada?

This is a very good question. One of the reasons they aren’t well known is that they’re not very large (if GG is a micro company, then Matteo Miglia is a tiny company, and Armada would be small), but the Fore was supposed to be the one thing that they had that was mainstream appeal. The other reason is that I never got around to creating a thread for them. Which I’ll eventually have to rectify, but I have a lot to do before that.

Armada is supposed to be making, in 2017 (not all released at the same time):

So a fairly small and focused company then basically? With a definite performance edge to it? Gavin will remember that for next time

Review: 1988 Assoluto Crinale "Ignore those who say don’t meet your heroes, they’re missing the point" Thanks to @Deskyx for lending me the car!

Quite a fitting verdict for such an unhinged machine! Once again your writing has clearly hit the bullseye, without a single word out of place.

A new review of an old car - it’s the Dolphine Mk. 1 Sprint!

Gavin drives the final edition of the Hodan Okayama.

Review: 2017 Scarab Ceres SR “The question is: are you willing to settle for store-brand ketchup instead of Heinz?”

It’s not often Gavin gets to drive a concept car, but when the offer comes along…

Review: 2017 RJM Eden Concept “The Koreans have made a Mac Pro with wheels and seats and painted it blue”

The ultimate in Italian luxury; the Zavir Squalo Ultimate gets driven.

Review: 2017 Zavir Squalo VII Ultima “It’s an Italian luxury saloon. Of course it’s going to be incredible.” Cheers to @szafirowy01 for lending me the car!

Hey, It’s the Ganter Motors museum. We can give a 1953 Ganter Indiana V8 Auto Coupe for testing and showing up.

Heya @FX04, if you’d like something reviewed, PM me and I’ll add you to Gavin’s list of cars he needs to review

I’d like to begin by saying thank you to the team at Kraft Haus Technic for such a nice day. You managed to make the usual corporate event feel of car reveals far more bearable, plus the food was great. Anyway…

KHT know how to make fast cars. They are the yard stick, and that’s an end of it. The Eau Rouge is no different; a smooth, sculpted jet fighter of a mid-engine hypercar. An 825hp, ultra advanced performance machine.

The front looks like something out of the new Blade Runner film. The rear is wide, but cool. The whole body conveys motion. There’s no emotion, anywhere; it’s as against beautiful as you’d expect any German car to be. It’s pretty vulgar in parts, but it oozes performance. Functionality over style.

KHT took us out to the Nurburgring for a pre-production drive, a location that couldn’t be any more suitable.

Sadly it won’t have enough room to get up to this cars top speed of 247 mph, but it’s certainly enough to feel the impact of the 2.4 second 0-60 time. It’s surprisingly unbrutal, but you can hardly miss it. Back to that jet-fighter analogy, it’s very much like putting the afterburner on every time you even merely stroke the throttle pedal.

I am not accustomed to the Nurburgring, and my passenger-cum-instructor from KHT is a welcome bit of help. Thankfully once I’d got the hang of things, I could get a brief glimpse at what the Eau Rouge is capable of.

It feels like a race car, even on this ‘road’ trim. And an American one at that. The 7L V8 isn’t ultra responsive, rather the power builds and swells, but there’s so much of it to deliver that any input makes a big difference. The brakes are sledgehammers, and good ones at that. You will stop. The suspension is phenomenal; absolutely no body roll and yet it still manages to be somewhat comfortable. Thank the active suspension for that, otherwise it would be unbearable anywhere else.

One word does come to mind though; frantic. The whole car feels like a rat with rabies, only contained and controlled. Give it an inch and it’ll send you right into the nearest tree, and even when I was hardly pushing it beyond 50% of its capability, it was more than ready to kill you. You’ll definitely need to keep the driver aids on at all times until you’re life insurance is sorted and you’re sure you have nothing left to loose.

This is how you do a hypercar. It’s a mathematical example, and a near perfect one at that. Just one problem; it has no heart. It is an out-and-out machine. There is no soul here, though I feel it might be somewhere behind all the carbon fibre and electronic gizmos.

It’s not beautiful, it’s very calculated, it is purely function over form. But you won’t love it; you’ll love what it represents, the result of hundreds of thousands of hours of R&D, the result of years of testing in the world of motorsport and many, many millions of dollars of funding. That is worthy of the utter most expect.

But as a car, it’s not something you’re going to feel a connection with. It’s incredibly good as a machine, and nothing more. The passion is in the performance, and it’s been thoroughly camoflauged.

The Eau Rouge, then, is the A-10 Warthog of the Hypercar roster. It’s not beautiful and it’s hardly soulful, but that thing is still in regular service 40 years after its introduction, and there’s a reason for that. Something tells me the Eau Rouge will have a similar status 40 years from now. 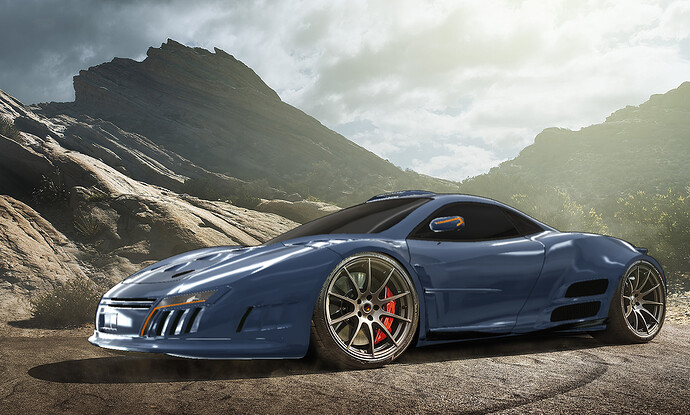 Photo by @squidhead because none of the pictures I took could do this justice and his photoshop work is fantastic. Read the full article here, the story behind this car is fantastic.

It’s not beautiful and it’s hardly soulful, but that thing is still in regular service 40 years after its introduction, and there’s a reason for that. Something tells me the […] will have a similar status 40 years from now.

That is… surprisingly correct. Pure maths and engineering approach. A veyron with a different set of goals, and i did not notice that till you pointed that out. Thanks for the review mate!

I agree with you fully. It’s a pragmatic, rather than emotional, hypercar, but still crazy enough to give most drivers a real fright if they’re not prepared.