Rules.
Front Engine
Rear Wheel Drive
Engine must have a reliability of 10 or more
No LUA MODDING
1 car per person
Year 2020

How It Works
Top 10 Fastest People/Cars
Use Tulsa Dragway

All times are tulsa expect 1

That’s odd, the previous thread generated so much interest!

I’m more of a track laptime tuner myself, but will pitch in if it’s still not taking off.

I just haven’t gotten around to finishing off my dragster designs. So here’s the original Boss I powered by a Boss 432 Big Block from 1969 with 2015 internals. 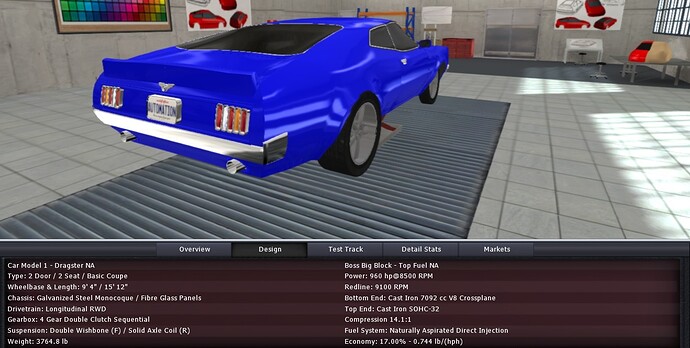 Edit: Added photos of the car.

Having seen the last 1320’ battle, this will be knocked off rather quickly. Of this, I am certain.

Here is one to fill the ranks until it happens, however.

This is the Midnight Madness, a custom, one-off, specialty car, purpose built for the strip. 600 horsepower and 440 pound-feet delivered from a 5.0L modern OHV naturally aspirated V8, revving to 8300 rpm, and delivered to the rear wheels for awesome smoky burnout. (and who doesn’t love awesome smoky burnouts???) Even with all of this wondrous power, it still has enough reliability to put it out on the street as a daily driver after passing inspection (which is just ludicrous, right?).

For the record, I don’t typically do rear wheel drive cars, but for this, I simply dropped the RWD driveline into my normally AWD roadster, squished the front tires, stuck slicks on it, and took all the front downforce off. Oh, and swapped the gearbox. 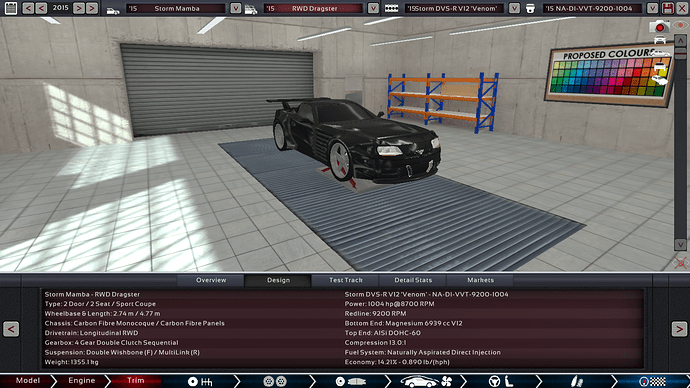 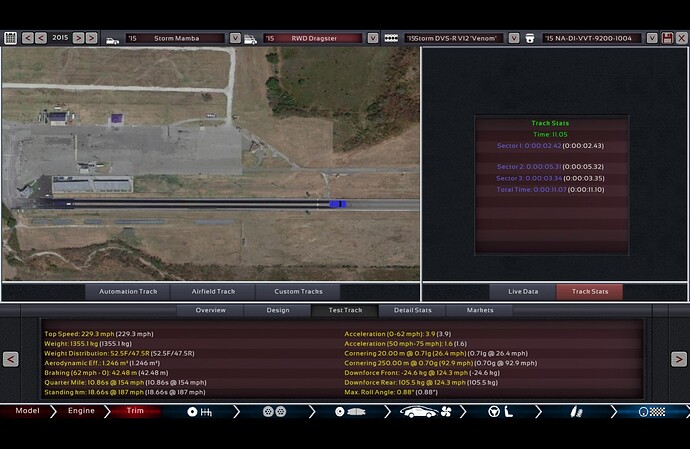 Also for the record, if I could use AWD, my time would be… much, much faster.

Of course AWD is faster. The AWD hooks up much quicker than FR can. You’re basically launching from the front tires where the weight is, then pushing with the back tires once they gain their traction. It’s considered bad form to even compare them, unless there is a substantial difference in power output, like an AWD Subaru 2.5L posting an equal times with a 9.3L RWD monster with 10000 hp on a blown nitrous engine (probably theoretically possible, but highly unlikely to ever happen).

It seems unlikely, also, that the car you posted would be much faster using those front tires. haha

EDIT: @OP, it seems reasonable that the year of the car should also be posted. Most will probably be 2015 (or current year as time progresses on), but the older cars should get a shout out as well! And, of course, there are those who will build the cars of the future, using all of the latest tech to gain that .01 seconds off of their times.

EDIT2: Also, which time on the Tulsa track is the actual 1/4 time? I see multiple times being displayed.

EDIT3: It says one car per person, but can that car be refined after submission? Or is it one shot until you fall off of the bottom of the list?

I did mention in my list of changes to the car that I squished the front tires. I found reducing tire width up front (getting rid of the nice, wide, sticky tires that make the car actually handle on tracks) to improve track time when steering isn’t important.

Only reason I mentioned the AWD would have been faster is because I’ll willingly admit I’m crap at tuning RWD cars. I build for track performance in cars like that, and drag times weren’t overly important to the original design. I’ll also admit that, yes, it is bad form to compare them, and that’s why I decided to make a RWD version, though mention that I typically build AWD and really don’t know what I’m doing with RWD. I also used a vehicle that could be sold through Automation’s markets tab (granted, under the Hyper category) to avoid making a 100% race-tuned monster that has no business seeing a street, though with 1000 horsepower, it still shouldn’t be on the streets.

Still, I feel it was a decent attempt at the quarter mile. Won’t make any further attempts at it, personally, even if we’re able to.

lol 10000hp blown nitrous engine, I think that one would probably lose to the Subie on pure account of too much time shredding the tyres to hook up!

So, I decided to do a thing.

it is a proof of concept atm, but this is a 3L V8 CP Turbocharged not a Crown Victoria Wagon.

Wow. That’s really good for a 3L Turbo. I built a turbo variant of my Boss 432, but it wouldn’t hook because it was well over 1000 HP and we don’t have drag radials. I have a few other designs that might work well though. I’ll be doing some tinkering as time goes on. I’m going to leave my 1969 muscle car up for a while.

(where can i buy lead weights that make the back heavier 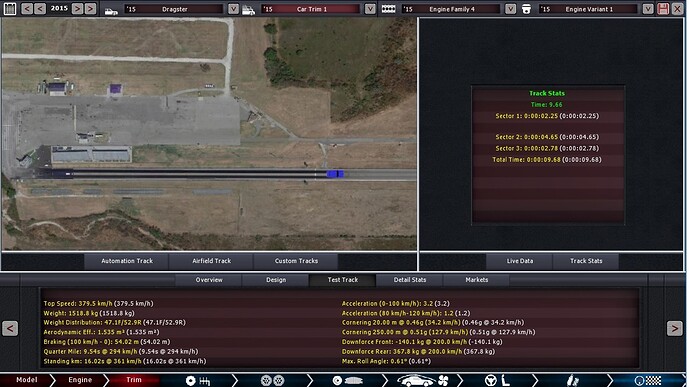 lol 10000hp blown nitrous engine, I think that one would probably lose to the Subie on pure account of too much time shredding the tyres to hook up!

That was the entire point! It sounds like it would be fast as hell, but probably wouldn’t make it to the 60’ before the underpowered (in this race) Subaru made it to the other end!!

That’s not a dragster, Luilakkie!! That’s a sled-bomb!!! Hurling that much weight down the strip at those speeds is begging for a disaster. hahaha Good job!

Okay, I decided I’d join in the fun on this one.

Who’d like to see a 10 second 9 seater luxury combi van?

I’m pretty sure I can get more out of something else, but there’s just something about this that just seems to fit the bill…

I have now discovered luilakkie’s setup, or at least, thereabouts. I’m still a good 0.1s slower though, that’s some impressive setup you have there!

I present my car for the list. Havent messed with this car sense before the update. This car did hold the record for the fastest front engine rear wheel drive car in the game.
Weighing in a 3559 pounds, it runs the 1/4 mile on tulsa at a cool 9.63. Will mess with it this more this weekend when I have time.
Edit. The very bottom pic is this update, top one is before. 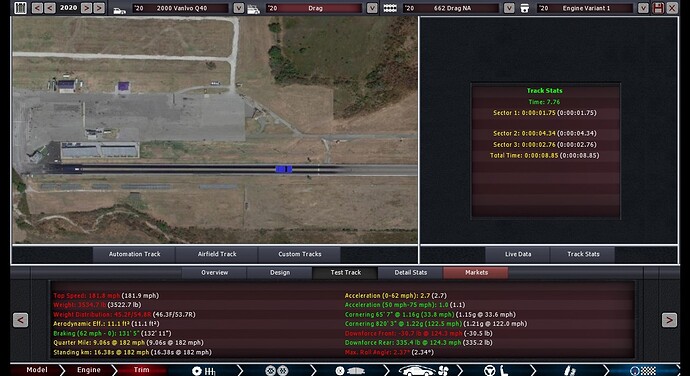 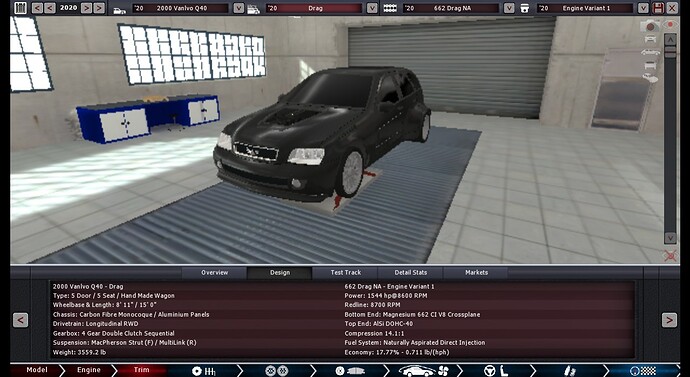 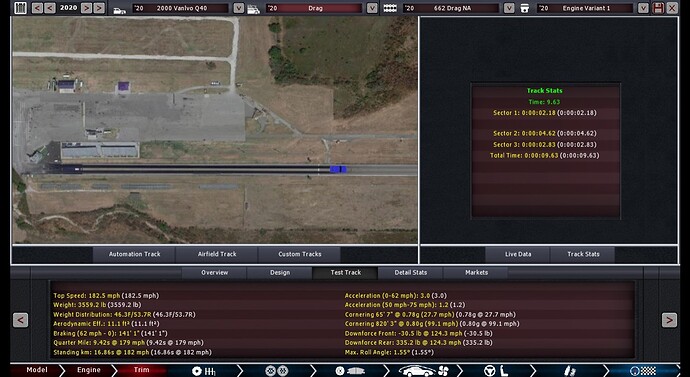 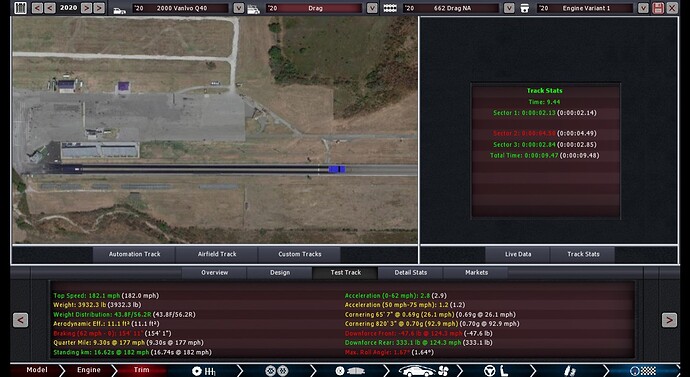 Ya haha, My 60 foot is a little slow for my liking, if only there was nitrous oxide