NOTE: I will be working my way up to 2020. So expect old cars in the beginning!

Short History: SVA was founded by Eli Grand in August 23, 1960. The company started as luxury cars, but later started to add performance cars to the lineup. Their first model, being the SVA Phoenix, was a car for the family who wanted a simple “luxury” car. The company suffered a stopped production from 1963, and started again in 1968. Luckily, their comeback has saved them.

Those 105mm Hard Tyres are screaming for help, they would make an RWD car do mile-long burnouts even with 100hp, widening them to at least 225’s will probably half your 0-100 time to around 8 seconds or less and your handling would leap from 0.3g to 0.7-0.9g, make those rims smaller and you would probably save some lives too, according to the game it is so undrivable that it has a tameness of four,when it could get to at least 30 i hope this helped, it’s bad to see some nice, unique designs be damaged by crazy wheelspin

I was wondering why the tamness and junk was so so small, tankfully someone is able to aid, TO THE RESCUE before someone dies!

After failing to realize how much of a hassle a Phoenix was to drive, they remade the car with more user friendly characteristics. They offered anyone who owns the previous Phoenix model a trade in. 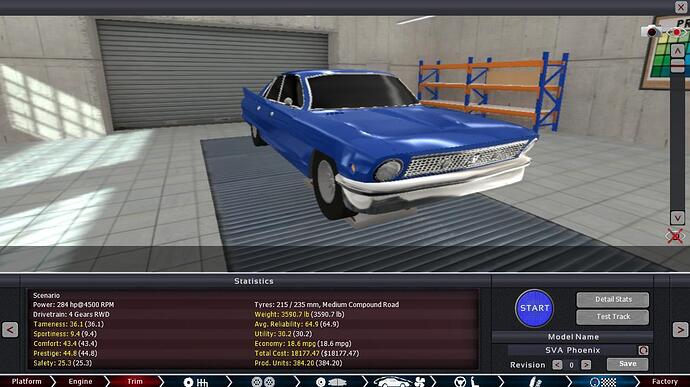 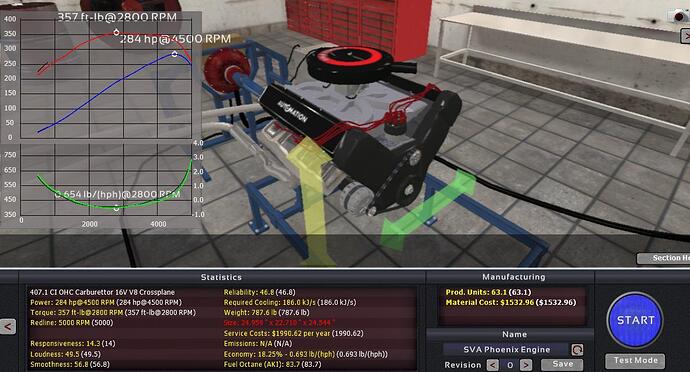 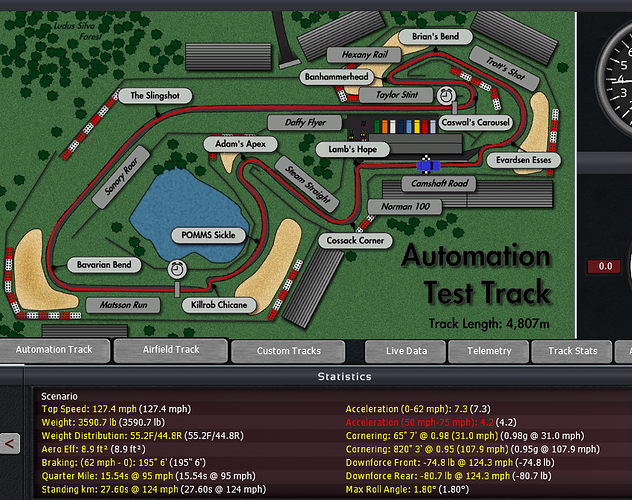 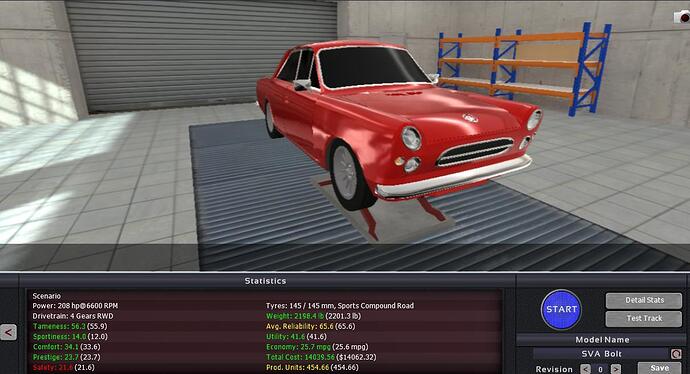 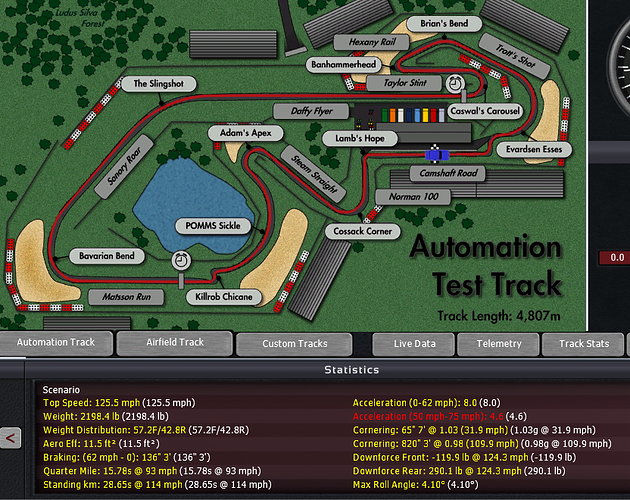 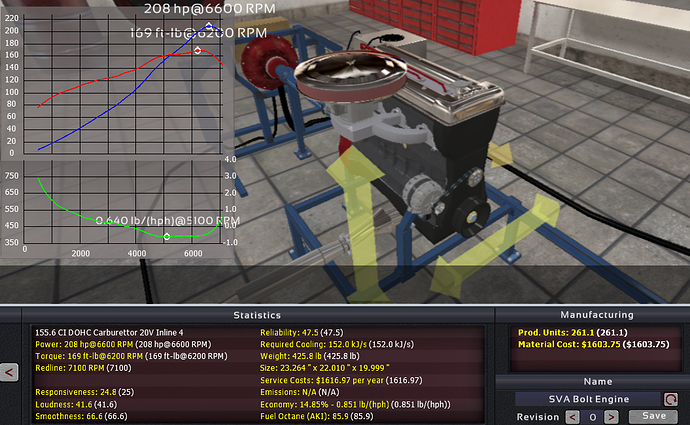 After the brief moment of pause, SVA continued their production with the latest fad of the late 1960’s. They also changed their logo. 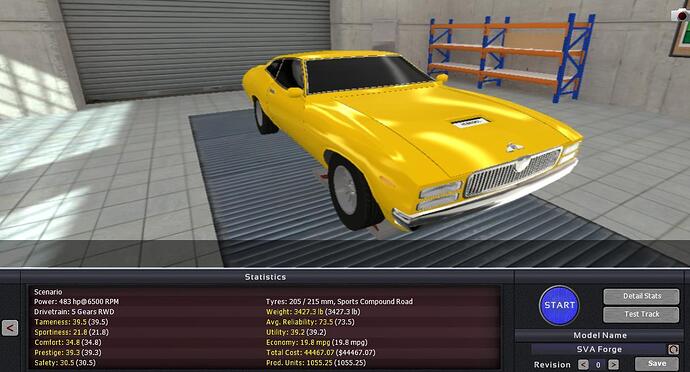 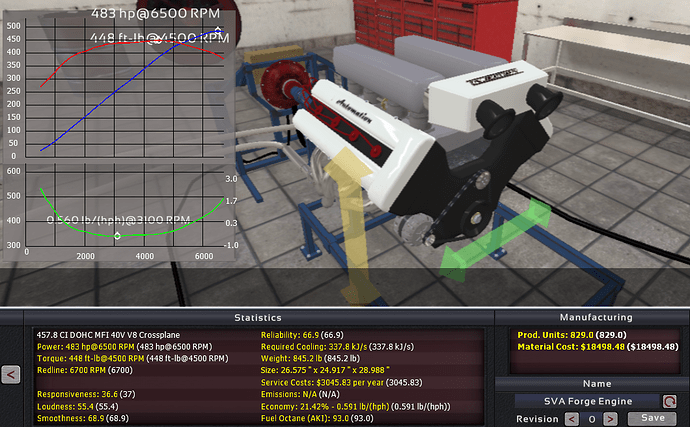 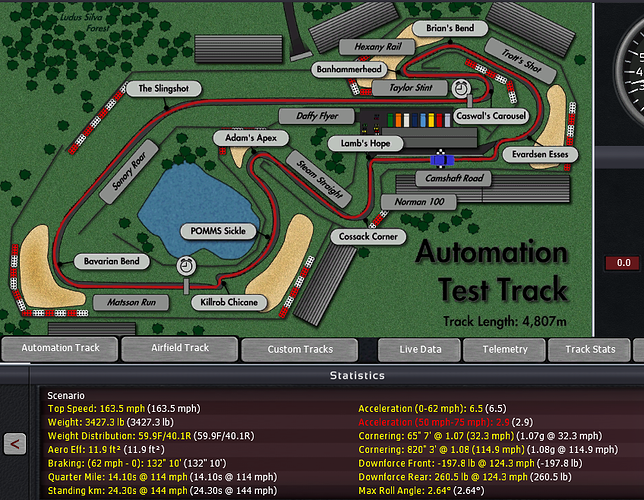 A note, even though it says 1968, i have no idea if inflation of prices are calulated. I have no knowledge for the prices back then.

Jesus mother of god. Nice cars and all but the price and prod units on the Forge is ridiculous, you could get a more powerful muscle car for a quarter of the price in the 60s

I don’t think the game calculates for inflation. It only calculates the ease of which technology becomes better produced. Somethings may actually be cheaper in newer years because the tech is better known.

Yes, I’m pretty sure calculating inflation would be ridiculously hard. 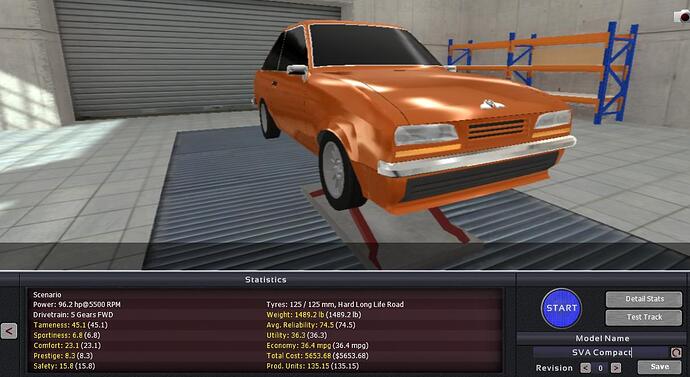 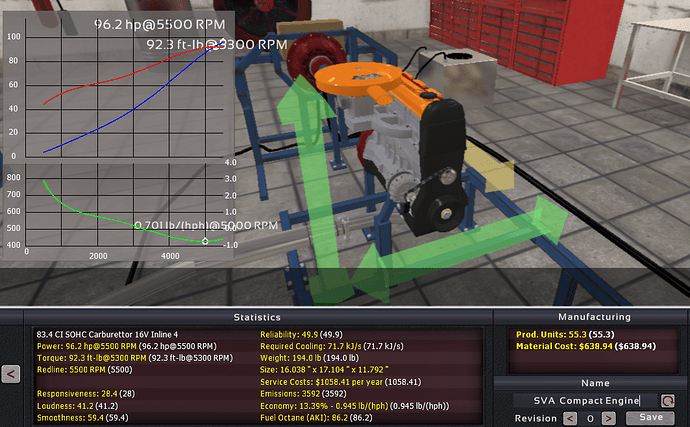 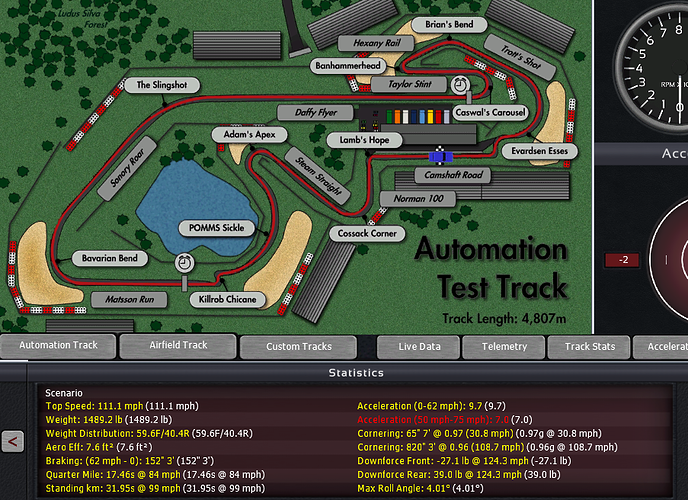 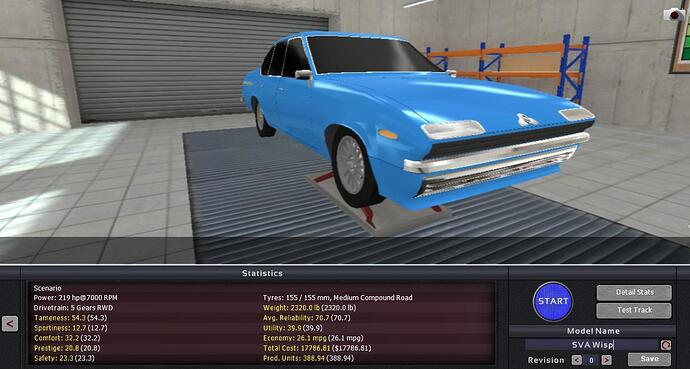 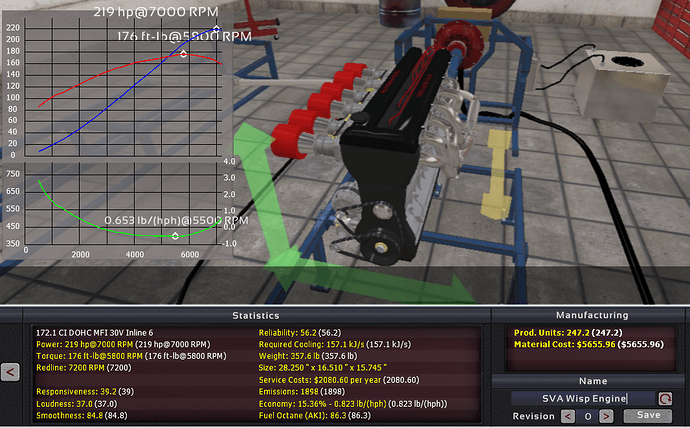 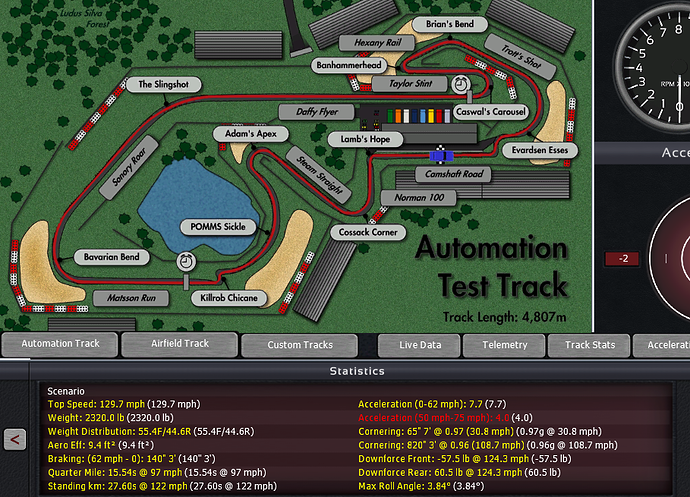 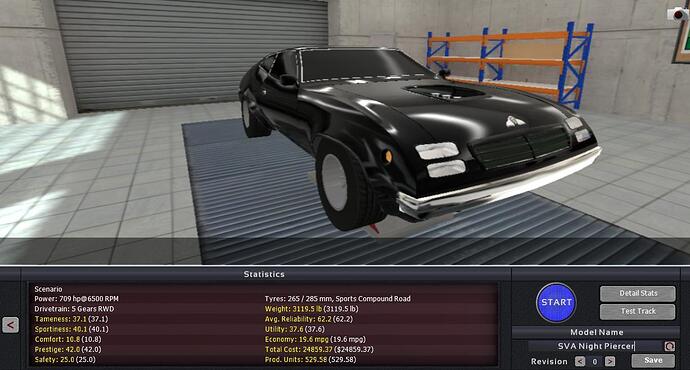 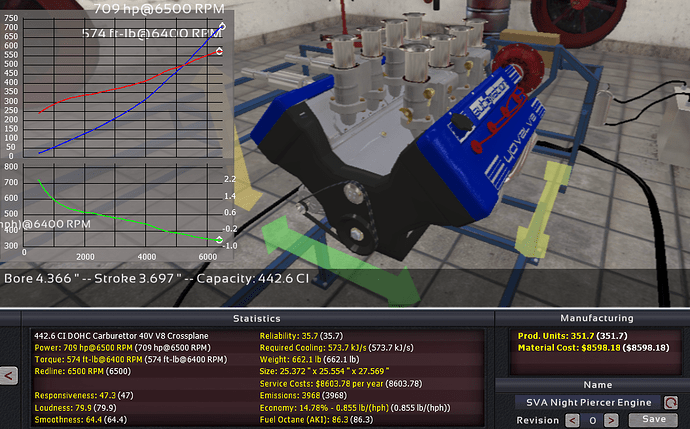 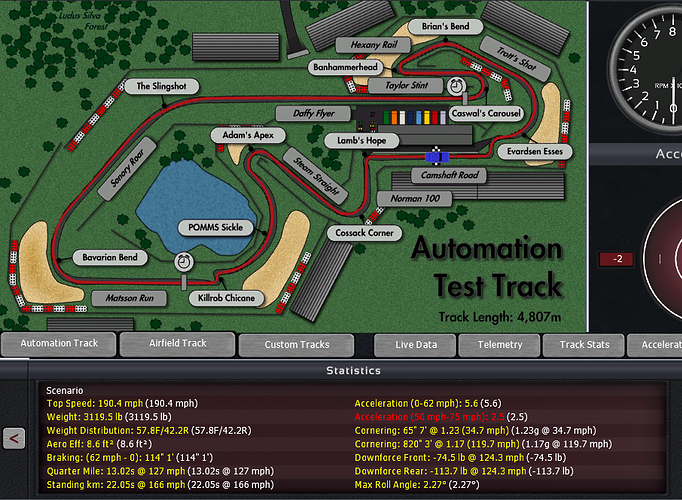 ^because of this, the Forge will most likely be forgotten in 1972.

Now I’m not too sure but given the body shape and such, would that car realistically be able to reach nearly 200MPH?

It looks like some of your engines are extremely redline limited. You should either make them rev higher reliably or pull back the power curve by using a smaller cam.

One problem with a method some people here use, multiplying -cost here- by prod. units doesn’t realistically work. Not because it’s untrue in the slightest, but because because it’s not as simple as that. Prod. Units is NOT man hours like it used to be, you also have to take into account how well equipped your manufacturer is… As I believe it has been mentioned by the devs, tech pool effects your production costs and prod. units required to manufacturer ----, meaning realistically, sandbox modes Costs + Prod. Units calculations are not really comparable to an equipped manufacturer. For example, if you have 5 tech pool in, say, bottom end parts, you can turn quality up to 5 in said bottom end parts and get all of the benefits you’d normally get without taking a major hit in cost or productivity units, something that is NOT calculated in sandbox.

TL;DR prod. unit costs math is not particularly accurate except if your company is bog-standard with average tech ability in every category, really, it’s up to you to think about how well-equipped your fictional manufacturer is, and then determine a viable cost based on the statistics the game gives you.

Theoretically and most likely seen true from it’s shape, no. It most likely would not make it to 200.

Depends on the quality of the engine’s internals too, I would imagine.

Agreed, your prices are astronomically high compared not only to cars in your market but cars far higher. Think about the market with this car. Will the muscle car segment, or even the luxury muscle car segment, need handcrafted seats at 15 quality? Your idea is interesting in theory, but don’t expect to make any money.