Ok, yes, I know turbocharging has been covered. This is intended to be a very game engine friendly suggestion for the turbo revamp. I have no idea how far along the revamp may be, but I have been doing a lot of reading on turbos recently, and though I would share. I did do a forum search, and didn’t find much in the way of technical descriptions.

As of now we have basic non variable, single geometry turbo chargers. Frankly, these work great, and well represent how those work. Can we split hairs on wheel trim? Sure, but why?

The biggest, and simplest change is based on how this system works now. The system is based on a one turbo per bank model. Splitting this (0, 1, or 2 per bank), coupled with being able to size the turbos independently would be useful. Say you have a V8, and you run 2 per bank (4 turbos) you have 1 pair at one size, and one pair at the other. For an L6 with 2 per bank, you have 2 total, one of each size. This makes an expensive, rudimentary system system so one spins up fast, and the other flows enough for high (engine) speeds. The graph would need 2 colors, one map line for each set.
Pro:
Larger turbo effect area
Quieter exhause
Cons:
Expensive
Slight dip in reliability
Difficult inter-cooler sizing

Edit:
@Watermelon3878 raised a good point about the twin scroll turbocharger. In short, twin scroll is the “tuned exhaust” of turbochargers. The firing pulses are divided evenly into 2 identical exhaust chambers, and so exhaust flow into the turbine is smoothed. I can’t find a good source for when they were introduced, so lets say 10 years later for game purposes. I did find some dyno charts, and a twin scroll is 5-20% better than a single across the power band, much like going from sleeve bearing to ball bearing today. We will just assume the turbo is a twin scroll unless you are running a V6, or V10 with a 1 per bank setup.

This should be simple to add as well, change the calculations for a 5-20-5 bell curve improvement if CYL/2=(whole number) 10 years after turbo tech is available.

Now for the more exotic (or more accurately modern) systems. I don’t know what came first chronologically, so I will explain in the order I studied them. Fortunately they are very similar in concept, and interface.

Variable Geometry Turbocharger (VGT)
A VGT has a set of vanes on the turbine (exhaust side) that make this size change between 2 diamaters during operation.

Back to it, the interface would work the same way as VVL works in engines right now. Selecting a VGT turbo would give you a second exhaust diameter slider, just like VVL has now.
Pro:
Broader peak boost area
Faster spool without sacrificing flow
Cheaper than doubling up turbos
Cons:
Reliability hit due to hot moving parts
Louder exhaust than a single geometry turbo

Similar to a VGT, there is something called “dual volute” where there are actually 2 separate turbine feeds. 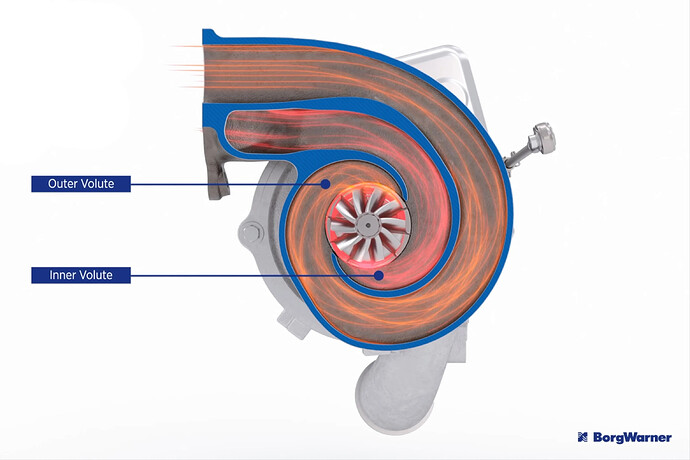 image3057×2038 600 KB
This would also work like the VGT, except the slider would be for the A/R ratio instead of the wheel diameter.
Pro:
More reliable than VGT
Same muffling effect as the single geometry
Con:
Less boost range than VGT
More prone to turbo surge (boost loss on rapid throttle change)

It would not be possible to combine them (yes, I know you can have a VGT in a double volute) so the multiple turbos are for older cars. Expensive, but effective, while the VGT vs. volute would require engine matching. The VGT would favor wide RPM bands, while the volute would be better for long stroke, low speed engines. Plus the similar volute design is more reliable that the VGTs moving parts.

What about turbo materials like aluminum, titanium, ceramic? Quality slider. Sure, I could get stupid overboard (probably have) but the KISS theory or engineering exists for a reason.

Superchargers are another animal.

Dual volute are important to modern turbos, yes, but I’d argue twin-scroll turbos are far more common and a more worthwhile addition. I know for sure that BMW uses them it all its engines, as well as Mercedes and Subaru (not in the EJ). However, the only engine I can think of with a dual-volute turbo is the GM 2.7

I never did venture into the “how does it work” math. This section assumes that Automation makes power calculations based on a rudimentary conversion to either CFM, or Lbs of air, and multiplies by the heat energy in fuels. I haven’t seen the code, but that’s how engines work, and the game seems pretty faithful.

For the multiple turbo per bank system I am assuming the manifold is open on both ends so that when one turbo hits the choke line (where flow is restricted) the remaining exhaust diverts to the other due to back pressure. For math purposes, the flow of each turbo would simply be summed (compressor, and turbine side). The air flow value for both turbos would be calculated, and the greater of the 2 values would be applied to the engine. This way the boost would not simply double, and the simulation would use the high pressure at low speed of the small turbo until it became restricted, then use the large turbo figures.

As for VGT, and volute, theoretically just copy-paste the VVT calculator? Again, haven’t seen the code, nor would I have an appropriate Rosetta stone to know what it means. I do have a concept of programming, and assume some percentage based modifiers are used (to simulate friction, inertia, and other factors) that would work for tweaking the turbo outputs.