OK, the scenario is as following:
It is 1996 and 4WD vehicles are no longer just anything for the military or rally drivers. The SUV segment is booming and while there is still mostly traditional offroaders on the market, there is cars showing up that is more and more passenger car like. And since Mr. Average is getting interested in the segment for the first time in history, Trafikjournalen is going to do a comparision between a great deal of all the cars on the market that has some kind of offroad ambitions.

That means that almost everything will be of interest. Lifted wagons like the Outback, softroaders like the RAV4, more traditional SUVs like the Cherokee, fun small offroaders like the Samurai, luxo barges like the Range Rover or heavy duty workhorses like the Patrol, I guess you get it. What’s not of interest though are just “regular” cars with AWD. To draw a line, A6 Quattro, Legacy or V70 AWD type of cars = no. Allroad, Outback or XC70 = yes. On the other end, pure military beasts like a Volvo C303 is too much for this test, so keep it quite civilized, if you are confused about your particular car, just ask.

The cars will be getting an in depth review by Trafikjournalen, and even though there will be a rating of the cars, there really will not be a competition where it is all about winning, since it is a bunch of different cars stacked against each other. Also, everything will be judged, offroad performance will just be a part of it, so no, you will not get a high rating by building a monstertruck that mashes your kidneys in the slightest bumps, gulps 35 litres per 100 km and turns into a deathtrap if you need to turn at anything faster than walking speed.

The rules will be quite simple since, as I said, I want some diversity.

Fuel type premium unleaded (lead was banned in Sweden in the 90s and finding anything above 95 octane on the taps could still be a hassle).

3-way catalytic converter and at least one muffler (again, the law).

No limited production/racing parts (we are not testing exotics now!)

No strict PU/ET or price limits, but a high purchase price will of course not benefit how the car is rated as value for money is important. Also, unrealistic engineering gives me the right to instabin cars. I will not be too strict, but don’t come with a transverse 60 valve V12, luxury interior in a Suzuki Samurai competitor or drum brakes up front and vented discs in the rear. Obvious extreme minmaxing or quality slider abuse will also result in an instabin. Once again, if you are unsure about things, just ask.

At least two rows of seats (jump seats in the second row can be allowed IF it seems realistic in the actual vehicle, don’t put them in anything like a Suburban!). Also, we are testing passenger cars here, so NO pickup truck bodies are allowed, regardless of seat count. Yes, crew cab pickups may have been used extensively as family cars in other countries in 1996, but in Sweden they were not. Van bodies are allowed as long as they have at least two rows of seats and side windows for all the seat rows.

Trim year has to be 1996. Model year and engine family/variant can be 1996 or any year earlier.

“None” safety not allowed, has to be at least basic 70s. Since it will be judged it might be a great idea to go higher than that.

How detailed of an interior are you looking for? I’m wondering if a basic inclusion of seats and a dash is enough or if you’d prefer a fully detailed interior.

Not very important. Just keep in mind that the more I see of the interior, the more accurate I can describe it in the reviews. If it is too simplified or non-existant I have to use my imagination from interior type and quality etc. so…

But neither interior or exterior design will be taken very much into consideration, other than that if it looks like a meme, I will rate it as a meme and in the bin it goes. If it’s funky looking but still well thought out and some energy behind it, it’s OK (a 1996 SUV could as well be a Isuzu Vehicross so…

). But when it comes to interiors, I will accept “five fixture wonders” on the inside. They aren’t the easiest to pull off at the moment.

If it is too simplified or non-existant I have to use my imagination from interior type and quality etc. so…

As an alternative, what if I state the exact type of interior and in-car entertainment system fitted to my entry in my PM? Especially considering:

But when it comes to interiors, I will accept “five fixture wonders” on the inside. They aren’t the easiest to pull off at the moment.

Yeah, the more accurate and in depth descriptions I get of the cars, the easier it will be to write about them.

But don’t send in a car with “basic” interior and describe the equipment as “leather upholstery, automatic climate control, mahogany dashboard” because that will not fool me. In the end, the choice of interior, infotainment and quality in the game is what will matter the most. Especially for the judging.

But all the info I get about the cars will make it easier for me to write a review even if it won’t affect the judging in the end, not only about interiors then, but about everything. 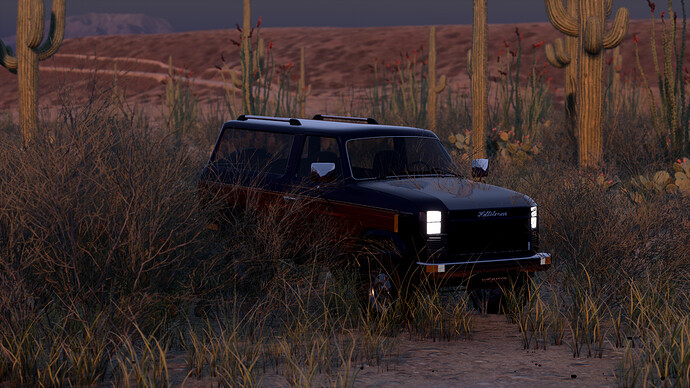 Since it seems like there has been no objection to the rules this far, I think that they are nailed now. 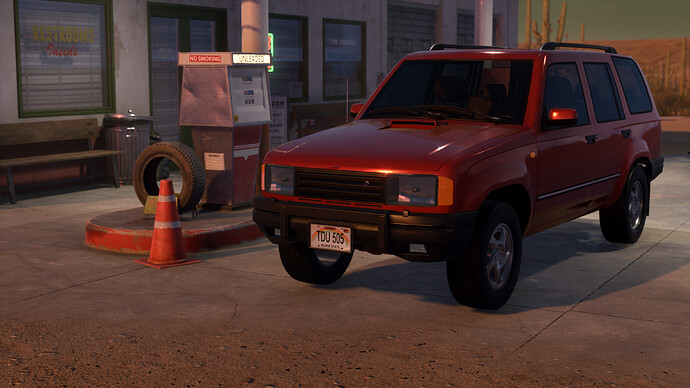 The Adventure was originally released in 1989 as Knightwick motors’ first “lifestyle” suv. Using a sturdy ladder frame and coil sprung live axles it was intended as both a capable off road vehicle and also an upmarket family car. 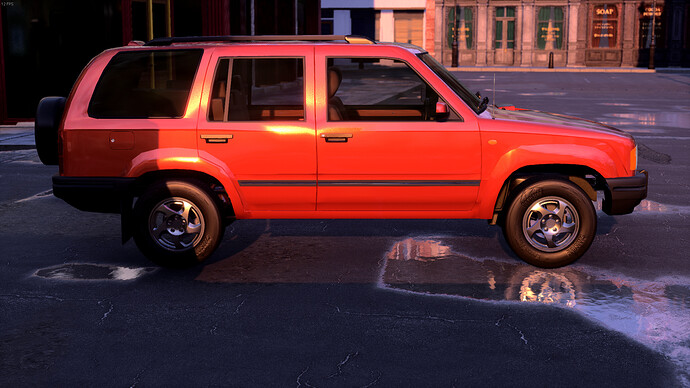 for 1994 the Adventure was updated with a new modern front end and updated tail lights.
A larger 4.0 V8 engine was introduced producing 192bhp@5500rpm and 321NM@2500rpm. Traction control was also made standard in this revision meaning for less difficult off-roading conditions locking differentials shouldn’t need to be engaged. 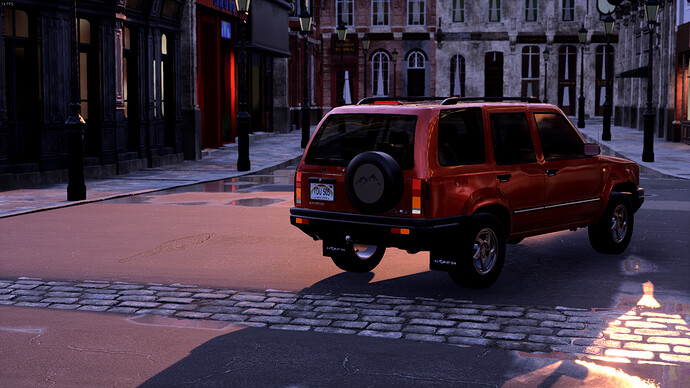 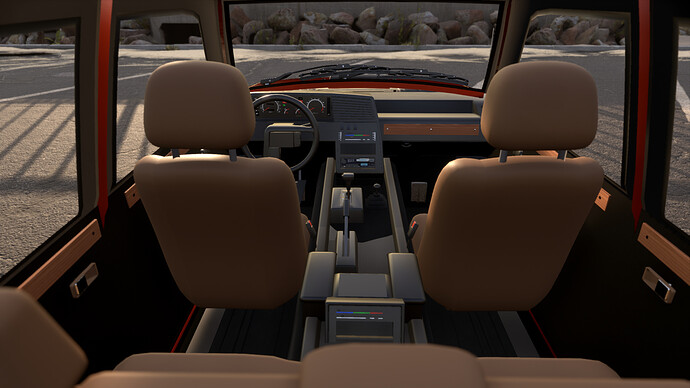 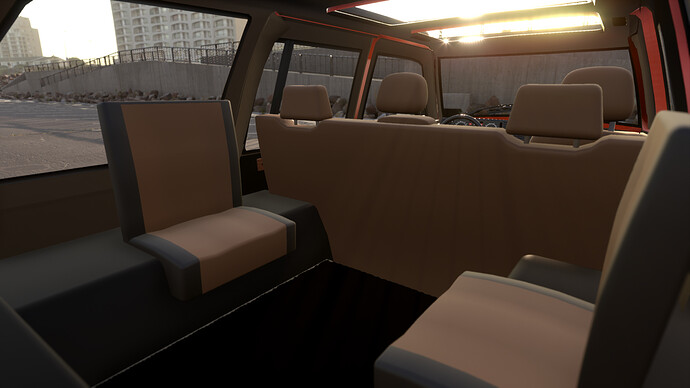 fold out side facing third row seating is standard on all passenger models of Adventure. 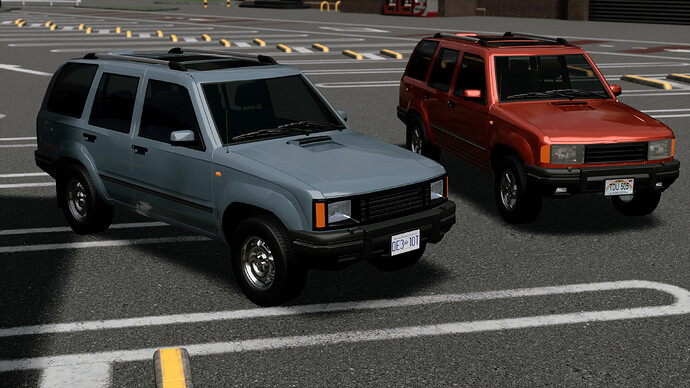 I halfassed an interior, w/e 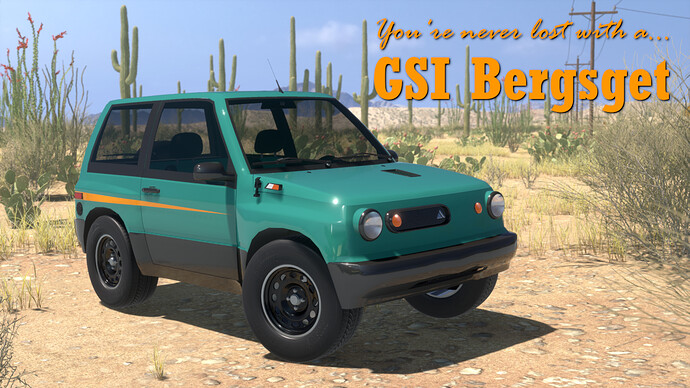 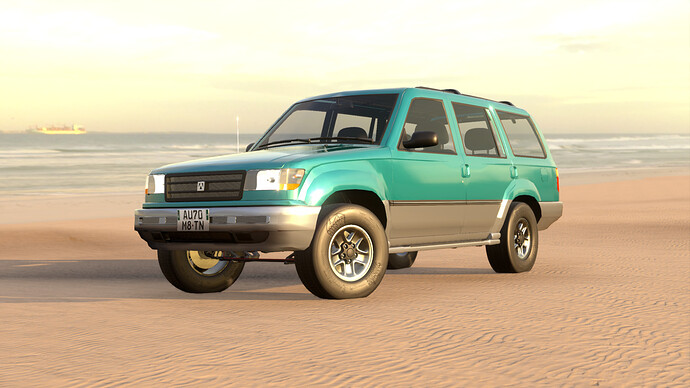 The American based Markley Motor Company has announced today that they will be offering vehicles from their truck lineup in Europe starting in '96. The first to be sold with be the Bozeman SUV. Available only in XLT trim at launch, it’s powered by one of Markley’s legendary inline sixes, includes four wheel drive, an automatic transmission, and a whole catalog of options and accessories. Prices are expected to be around $22,000. 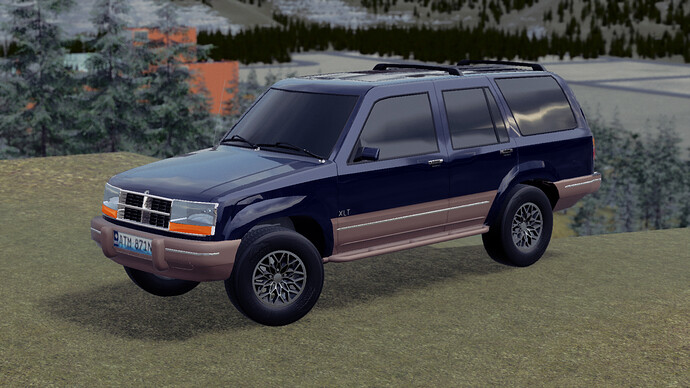 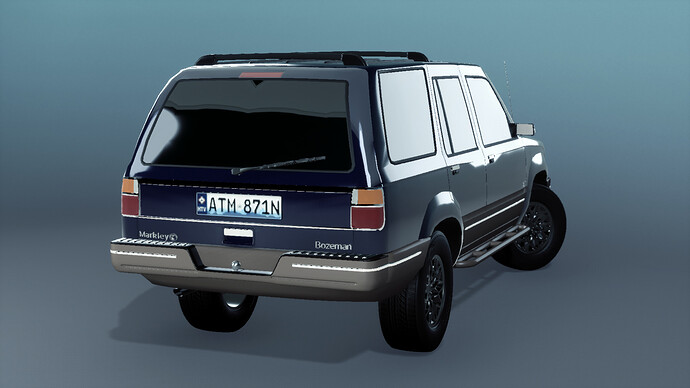 Tough enough for the wilds…

Fun enough for the beach…

Small enough for the city… 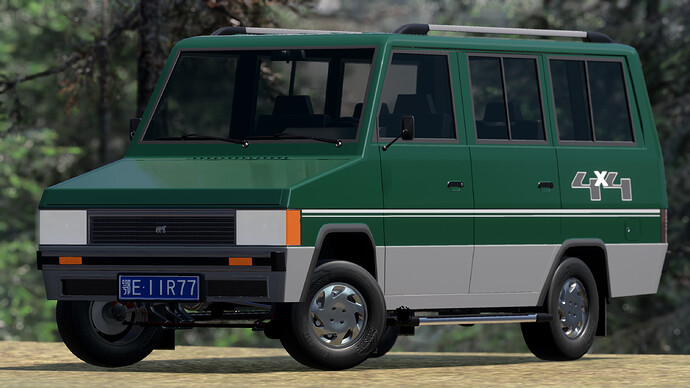 Meixian-Hinode Motor Works bring all new Tenglu KJ032200EU to country of Sweden. The car is a of very stronk, have steel ladder frame and steel body. Tenglu is use 2200cc engine that make 110 power of horse. Also have cat lithic convert, fuel 95 ron, and safeness for Europ regulation. 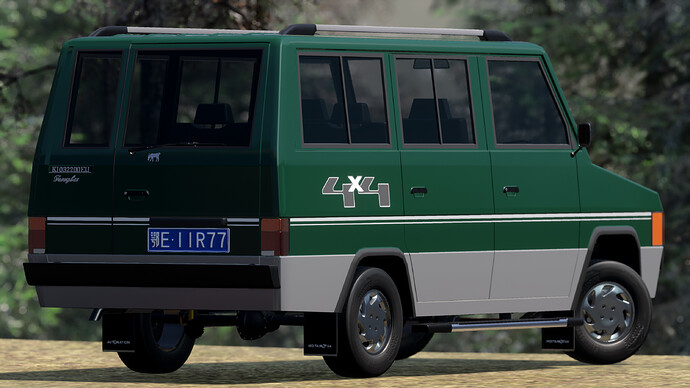 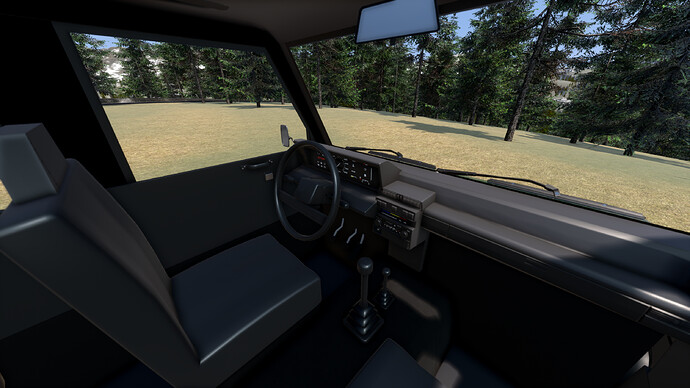 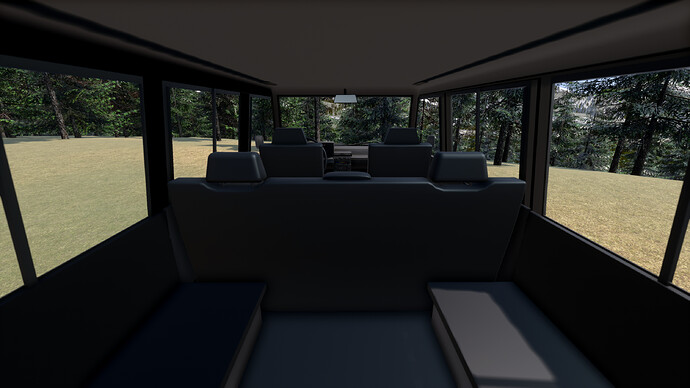 If it is available in granny stocking beige, I take two of them, thanks!

Husar Gora is an all-round car designed for people living in a middle of nowhere. Driving through mud in forests with full trunk of groceries bought on promotion in a market is nothing for him. 3.0l, 6 cylinder boxer engine driving all wheels through an automatic 5 speed gearbox. Gora has all wheel disc breaks and hydropneumatic suspension. The engine would develop 142HP and 237 Nm of torque and could get to a top speed of 183 kph.
The price is predicted to be around 21,500$ 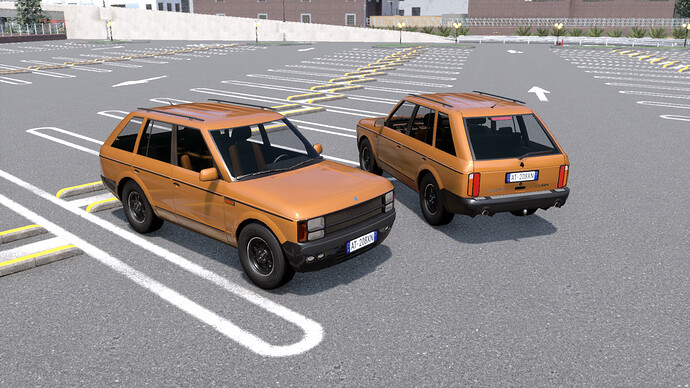 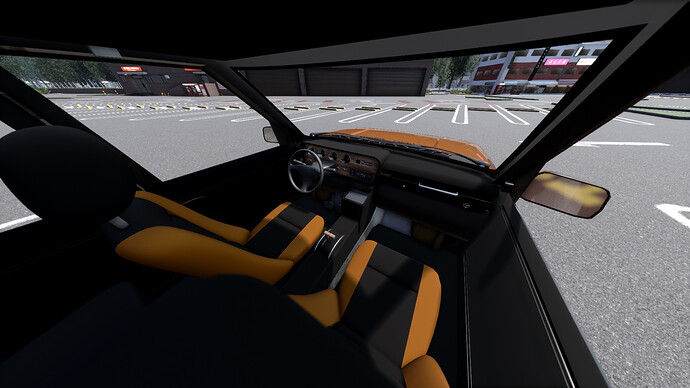 For those with more money than sense, set in its natural habitat (never too far from a gas station), I present you the Mons Granite. 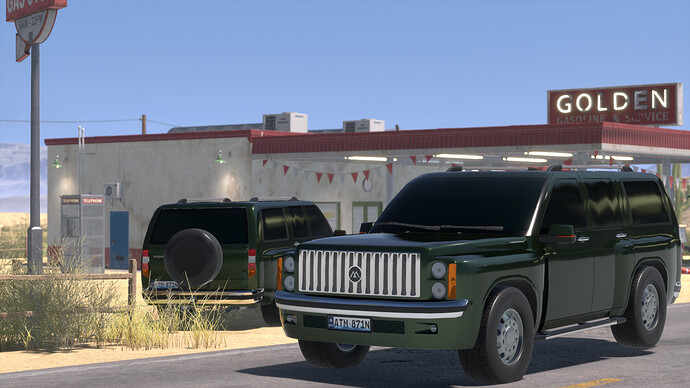 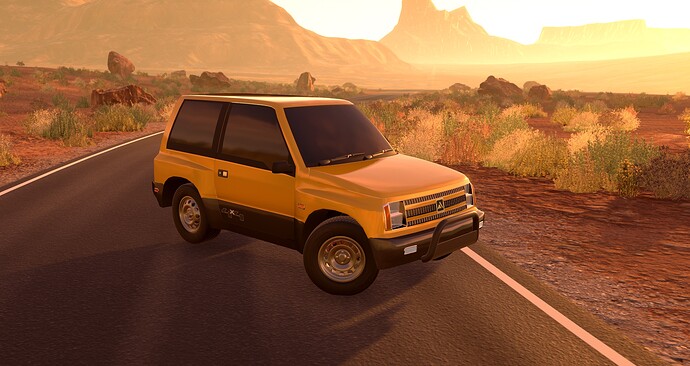 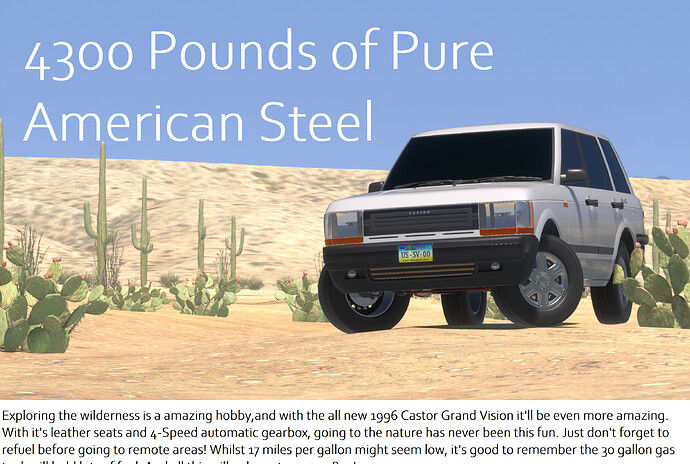 oopsies, made a typo 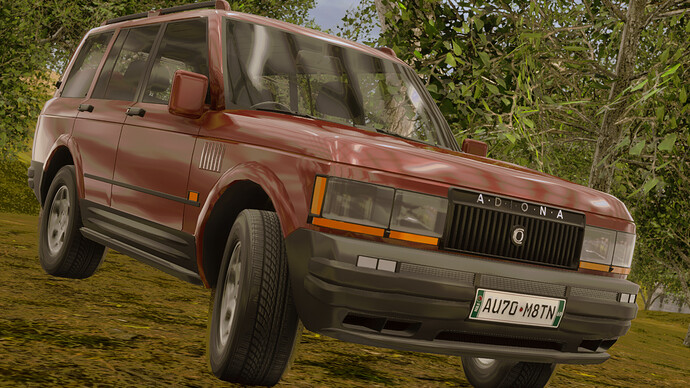 New for 1996, the new model of the Cutler Adiona is as rugged and capable as ever, retaining the last generation’s ladder frame and solid axle suspension.

Available with either a 120hp inline-6, 175hp V6, or 230hp V8 (top trim only), paired to a 5-speed manual or 4-speed automatic, with low gear range and manually locking differentials. Third-row seating is available on all models as an option. Please speak to your local Cutler dealer.

The press car given to Trafikjournalen is a mid-range OB model, powered by the V6 and paired with a 5-speed manual transmission. Designed more for comfort than the base model, it features leather seats and a CD player and wears optional 18’’ alloy wheels. The base model would be cloth, with a cheaper cassette unit, and would be equipped with steel wheels. Third-row seating is an option on all trims.

[details=“More Information”] I created this car back in June, including all the trims and engine options. It’s been updated with an interior slapped in and submitted as is. Cutler also sells a smaller, more road-going SUV, which I almost submitted instead, however, I prefer the Adiona.