The Car Shopping Round 134 - Conquering the Klondike

The Car Shopping Round 134 - Conquering the Klondike 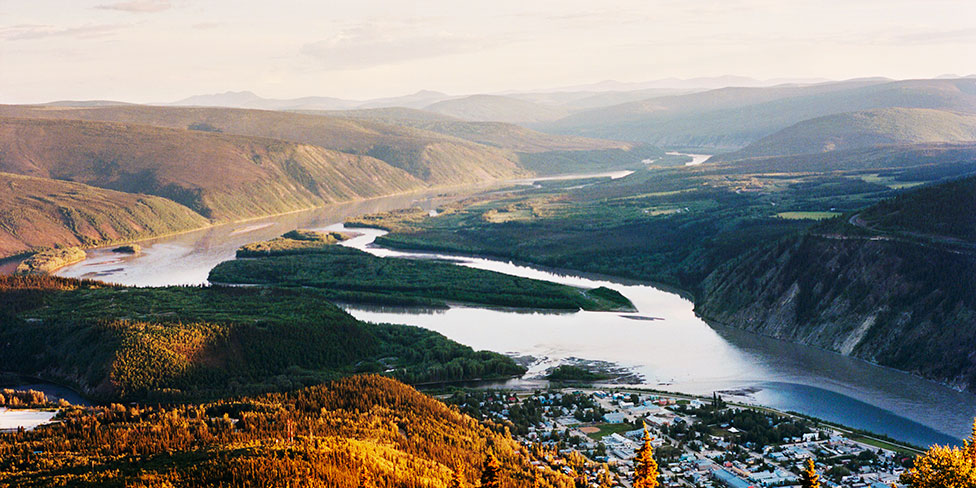 Bill is quite the recluse, living in a house he built a little ways outside of town on a large forested property. Having retired from the logging industry at a young age once he saved up enough to buy some land, he makes a modest living from hunting and trapping. While he may not have much he has what matters most to him: peace and quiet.

Bill currently drives a 1962 Dominion Labrador 4x4 with almost half a million miles that he bought used a decade earlier and it’s served him well though has been requiring more maintenance over the last several years. Once a week he loads up his old truck and drives into town to sell the week’s meat and furs and buy the supplies he needs, and that’s pretty well the extent of his interactions. Other than that, he’ll take a longer trip when needing something that isn’t readily available in Dawson City or to go hunting. That said, the truck also does plenty of work on the property, be it to drive down closer to the further traps or doing anything from pulling stumps to hauling firewood.

On a sunny and warm August day, Bill loads up his truck for his weekly trip into town finds that the beat up old Dominion Labrador is not starting again. The recent repairs to the distributor just aren’t keeping as well as he’d like and it’s one of the many problems his old truck has had as of late. To think he’s already had it for ten years. With another quick repair to the distributor, Bill is off again to see Annie down at the general store. She’s one of the few people he gets along with and where he takes care of any phone calls he needs to make, having no phone of his own.

Once down at the store and with the sale of the meat along with the purchase of a few groceries, Annie tells him he missed a call from his brother Ray two days earlier. With a sigh, Bill finishes loading up his truck and returns into the store to call his brother. They never really did along well and they haven’t talked since their mother’s funeral in Whitehorse a decade earlier, so he knows it has to be something important.

What he learns in the short phone call is that his old uncle Tom in Anchorage has passed, that the funeral is in two days, and that Bill and Ray were his last relatives and are getting an inheritance.

This will turn into an interesting week for Bill.

Bill’s plan is to visit the barber, pack his one suit, then make the day-long drive to Anchorage for some rare socialising with the funeral. Following this will be meetings with attorneys and bankers to get everything organised with the inheritance and finally head back home. He figures this should be done within the week, including the drive to and from Anchorage.

Bill is finally just about done with his business in Anchorage, including having spent part of his $18,000 inheritance on a new freezer and a few supplies to help with his trapping and hunting. Once again the distributor went and that’s when Bill decided he should really replace the old Dominion while he was in ‘the big city’ with all its dealerships. This is after all the same circumstances that got him to buy a used truck in Whitehorse a decade ago. This time, he’s got enough for a new. With that, he heads back to the motel and looks through the magazine rack in the rental office until he finds what he needs: a January 1982 issue of ‘Truck’ magazine outlining all the models available on the market for the year. Hopefully Anchorage is a big enough city to have at least most of them available.

Bill heads back into his room with the magazine and considers what he needs from a new vehicle. He’s not entirely set on another pickup truck, a utility wagon could work well for him too, or even a dedicated 4x4 that isn’t too small. Maybe even a spacious 4x4 van. Either way, he expects it to look as capable as it is, and that’s being at least as capable as the Dominion. Hopefully also sturdy enough to be the last vehicle he ever buys. He’s earmarking up to $16,000 of his inheritence for the new truck but is hoping he can get what he needs for a lower price. He’ll be sure to play hard to make sure these big city salesmen don’t try and swindle him.

1978-1982 trim year. Not everything gets updated every year and this factors for it.

Minimum 2000L of cargo space. For vehicles with a back seat, less cargo is okay if 2000L can be achieved by removing (or folding down) the back seat to carry large loads.

Minimum 500 kg towing capacity. Stat’s a little janky so a “realistic” amount is hard to achieve.

Realism is important. Do some research if you’re not familiar with the era.

Rules are subject to change until submissions open.

This is going to be fun! I already have a cool idea in mind. As far as I’ve poked around, the ET limit this time around can net you a decent carburated OHV and the price and trim ET limits are pretty lax.

But if I had to say one thing, it’s that a body the size of an AMC Eagle - one of the vehicle examples here - has very little to do with the ruleset. They were comparatively tiny with only a 110 in wheelbase wagon body, which as far as I’ve tried will fail completely at reaching 2000L/70.6cf with any seat count. They also had a center diff making them an ‘AWD’ design in Automation terms.

I realise an Eagle isn’t exactly what Bill is looking for but it’s more there as an example for a wagon body style that could work if engineered properly. I know some of the larger wagons can get 2000L with the rear seat removed so it remains an option for those wanting to go down that route.

I realise an Eagle isn’t exactly what Bill is looking for but it’s more there as an example for a wagon body style that could work if engineered properly.

I guess the Jeep Wagoneer could be a better example than the Eagle if you do not want to go the pickup way and want to use a wagon body? Even if it was more an actual modern-ish SUV type.

Yeah, fair enough. I’m actually experimenting with a wagon-type as well, I just think it’d be a shame if people got the wrong idea somehow.

Just as I expected, we’re staying in the 20th century for this round, but unlike the previous one, aesthetics won’t be as much of a priority as before, seeing that Bill is looking for a rugged work truck. It’s unlikely that he’ll pick something that’s bland or ugly, though.

And after building a test engine, I’ve realized that the only way to fit an all-iron OHV V8 with a cat attached, plus proper carburetion (such as a 4-barrel carb - fuel injection of any kind would be far too expensive), would be to use negative quality, something that can be avoided if the maximum engine ET was set to 85 instead of 80.

As for safety, I don’t think Bill would want to ride in a deathtrap, although advanced safety (especially for trims made in 1980-82) may well turn out to be overkill. And regarding transmission choices, an automatic would be more drivable, while a manual would be more reliable - I’m expecting Bill to consider both options.

would coil rear and leaf front be unrealistic? i cant find much info about it online

I am not aware of anything in that configuration except for a few old cycle cars (3 wheeler) with 2 front wheels for steering, and a swing axle rear.

There isn’t really any mechanical reason to do leaf front, and coil back. Coil front with leaf rear is/was really common. The coils leave way more room for steering and are generally a smoother ride, and leafs are better for load carrying.

You know, I’m tempted to try my hand at this one. Granted, my ad will be 100% absolute hot garbage, but at least the model year is within my design era.

I added styling as one of the requirements seeing as Bill wants something that properly looks the part. Also added an additional example vehicle.

@abg7 Engine ET is already pretty lax and I tested several V8s within the limits so I’m not going to raise it. Should be well doable to make a utilitarian engine within the parameters.

I’m considering joining this one. 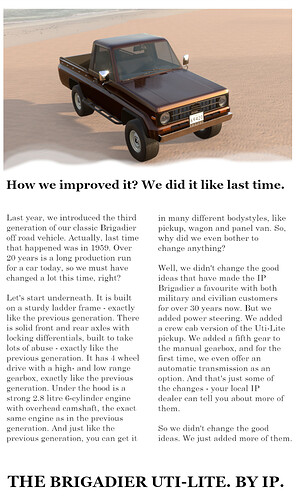 I tried making an OHV I6 (with 4.2L of displacement) as an alternative, and it worked fine in the first test mule I made. After all, back in 1982, not every vehicle in the utility sector was V8-powered. Now I just need to see if it works well enough with any other bodies that can accommodate it.

Alright, it’s now 8 PM EST so the rules are locked in and submissions are open!

The truck for the discerning customer. Capable, affordable, reliable. 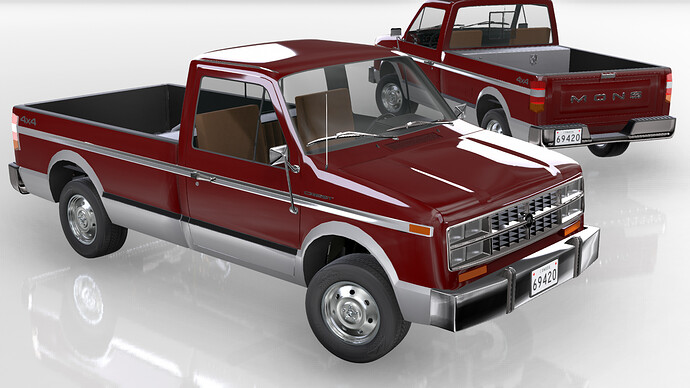 Looks good at your property. 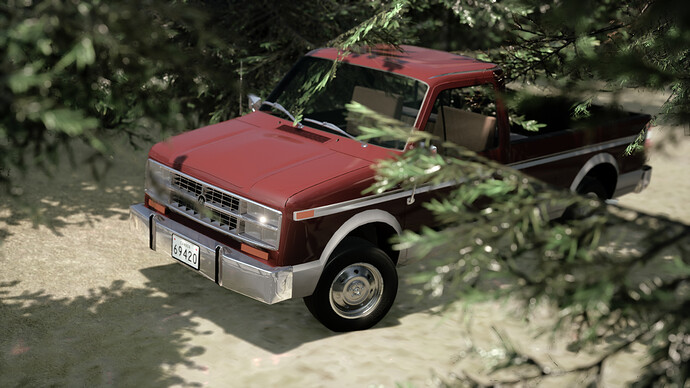 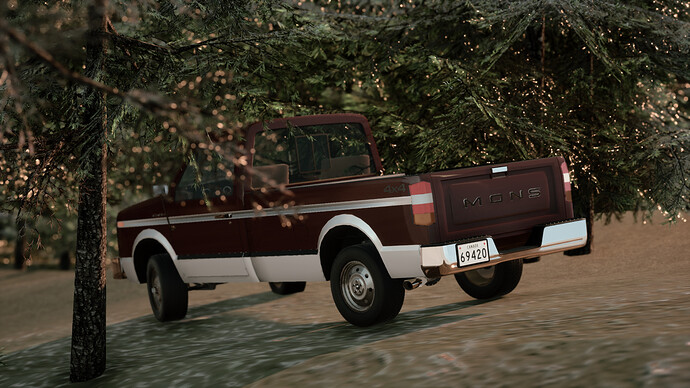 Looks good for those weekly trips into town. 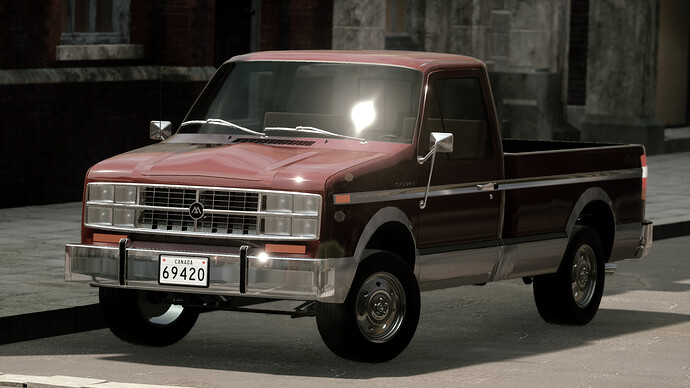 What more can you need?

For details, inquire within.

Whether you need to conquer cold, snow-covered trails or suburban parking lots, the Bricksley Wanderer is a great choice for those who spend as much time off of the road as they spend on it. 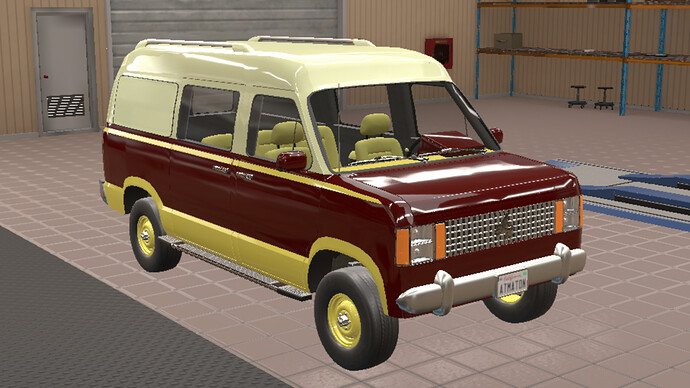 This is the High-Top trim, packing our trusty 3.6 liter V6 engine under the hood, coupled to a towing-optimized 4-speed automatic gearbox and 4x4 transfer case.

While it is our first V6 design, it has been in service since the Wanderer showed up in dealerships, starting in 1975. This trusty 1979 model uses a four-barrel carburettor for optimal fuel efficiency, and equips the latest in emissions technology, allowing us to save the horsepower while the government tries to save the planet. 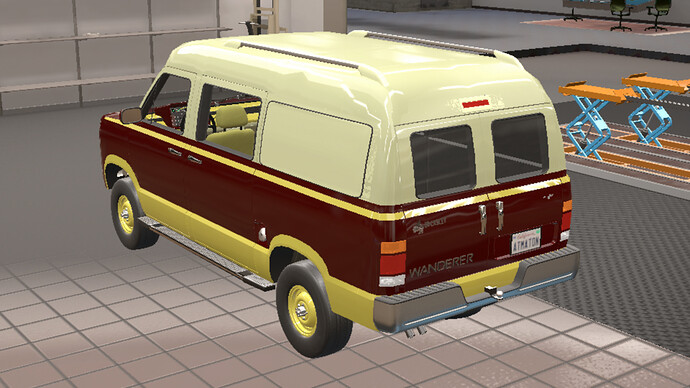 But, what do you do when the road gets rough, or you need to leave the road behind? Engage the 4WD system, and that trusty V6 will pull you through, and your trailer, too. If the trail gets even worse? Engage the locking differentials and low range, and drive to safety.

Sure, a truck might carry more cargo, but with five seats and an 8-track player, you and your work crew can all travel together. Plus, with over 3,000 liters of cargo capacity, without folding or removing the rear seats, you can still carry your supplies, toolboxes, or equipment to the jobsite.

And, when you’re not at work? Well, you and four of your friends can load up the back for a trip out into nature.

And now that the (admittedly crappy) ad is out of the way, I have to admit, I’m proud of the interior on this thing. One of my most-detailed ones in a while, and I’m proud of this plucky little i5’s integrated graphics for letting me do this.

I even managed to squeeze in the OHC IP 6L series engine for lore reasons, though I had to cheat with -1 quality on the cylinder head. Let’s just pretend that the low compression variant for the North american market had some problematic head that warped and cracked some years later… 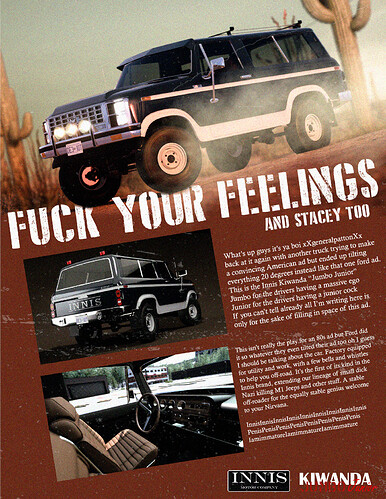 An Innis Kiwanda with a bed cap and some massive fucking tires. Factory-equipped for work, play, the gay.