Inspired by this great guide on how to build convincing classic American cars, this thread will go over how to design a good looking American classic car. (1950s to 1980s)

And with all that out of the way, lets get going

So, you want to build a good looking American classic?

Lets say you’ve engineered a sumptuous luxury coupe, or a bitchin’ muscle car. They drive great, the luxury car is like a cloud, the muscle car shreds tires left and right, and overall they’re hoots to drive in their own ways. But… something is missing. Something that can only be captured in the aesthetic design of the car. Well, hopefully this guide will help you catch that special something.

First off, you must know what size you’re car will be. Everyone knows about giant old American cars, but, as expected, American cars, just like cars from anywhere else, existed in diverse shapes and sizes. The size of your cars depends a lot on your intentions on it, for example, you wouldn’t try to build a luxury car out of a Kei truck (a rather hyperbolic example but you get the point).

Figuring out the needed size of your car

This chart should give you some ideas of what size class your car should be for the segment you’re pursuing. Remember, the actual dimensions of these size classes changed over the years, with the mid/late 1970’s being an important time in American cars being downsized. This, obviously, should have been done at the very beginning of your engineering stage.

Note: It’s very important to mention that wheelbase size is merely an approximation of the possible size class of your car. Your morphs can greatly affect your car’s size class, as size class is dependent more on length, width and internal volume of your car ¹. This is why there is some overlap in what wheelbases are considered compact/midsize/fullsize etc., as it is possible for your car’s actual body to extend far beyond the wheels, putting your car into a larger size class.

Believe it or not, despite being called the land of the free, car designers have to meet certain criteria of design that may or may not hinder aesthetic choices. Design choices that were regulated include:

Yes, the 5 mph bumper law is still in effect, nowadays mostly only low volume performance cars are affected, such as the McLaren F1, Bugatti Chiron, Mercedes CLK. However, in nearly all modern designs you don’t have to worry about messing with giant plastic protrusions for your USDM cars

Lets start with the easy stuff. The default size of the US license plate is nearly precisely the size of actual US plates (12" x 6") (its only off by a few millimeters), so…

DO NOT RESIZE YOUR U.S. PLATES

Headlights
Compare this European-spec 1978 Mercedes W123 (left) to its American-spec counterpart. What’s the most obvious difference you see? 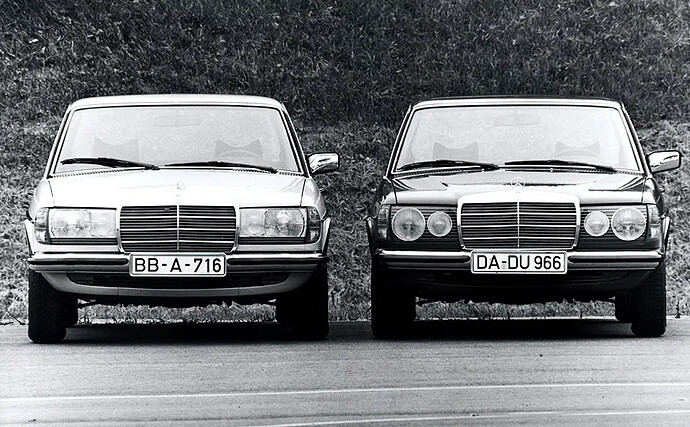 If you said the headlights, congratulations, you are correct. While the European-spec car used composite headlights with removable bulbs (like basically any modern car), the US-spec car used sealed beam lamps. Due to being sealed, if one lamp went bad, you threw away the entire unit and bought a replacement. To help keep costs down for someone trying to fix their car, the US government decided it had to regulate the size of the sealed beam lamps to allow for headlights to be cheap and universal. As long as it was the right diameter and shape, any sealed beam lamp could fit any car. In the Mercedes W123, the US-spec headlights were a pair of dual-filament 7" circular lamps (meaning the lamp acted as both low and high beam), while the inner lamp was a fog light (just an extra light outside of regulations). Here’s the regulations over the years ²:

Fun Fact: The Mazda MX-5 (NA) was the last car to use dual 7" headlamps, when it went out of production in 1997. They were concealed in pop up housings, and contributed to the overall cute look of the car.

Of course, you might be wondering, “How is this information useful to me if I don’t know how to reproduce this in Automation?”, well of course, I’ll answer how. A couple of the sealed beam headlights do a good job of following regulation size, and are pretty useful for getting proper scales easily, of course, as long as you don’t resize them. 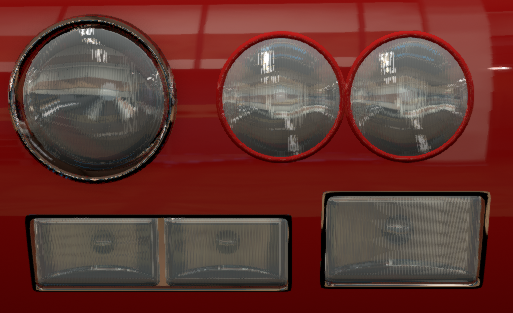 Note: For this fixture, default size is only at regulation size for the twin lamps, the single lamp must be scaled up to get it to regulated size. This is done using the tape measure fixture:

A Footnote on pop-up/hideaway headlights

Pop up headlights and hideaway headlights were an important staple of sportier and more prestigious American cars of the 1950s to 1980s. Aside from conventional pop-ups, as seen on the first generation Oldsmobile Toronado or Chevrolet Corvette C2 to C5, another style of headlights was prevalent on American cars known as “hideaways”. These headlights had a front cover that would retract open and fall closed, like a garage door, in front of the car’s lamps. The actual piece that covered the lamps could be made to look like the body work, as seen in the Lincoln Continental Mk.VI, or the cover could be camouflaged to look like a continuation of the car’s grill, as seen on the Pontiac Grand Prix.

Bumper styling had plenty of changes during the years of car design. In the 1940s and 1950s, bumpers were very separated from the car’s actual bodywork, sticking far out. More opulent and luxurious cars had larger, chromier bumps, with bullet shapes sticking out of the bumper known as “Dagmars”. Of course, those bumpers were very good at shredding jaywalkers, so over the years, they gave way to sleeker bumpers that flowed better with the car’s styling in the 1960’s. Finally, in 1973, due to new regulations, bumpers essentially became picnic tables to protect the car’s body from any damage in case of a 5 mph impact with a wall (hence the name - 5 mph bumper). Eventually, in the mid to late 1980s, bumpers were again more integrated into the car to help improve aerodynamics and meet EPA mileage standards.

Often, 5 MPH bumpers were considered quite unsightly on a foreign import car, as those cars were rather quickly modified to meet US standards, and not designed for the giant protrusions that were old fashioned 5 MPH bumpers. One clear example is the Toyota AE86 (JDM) vs the Toyota AE88 (USDM)

Fun Fact: Dagmar bumpers are named after American actress Virginia Egnor, whose stage name was Dagmar. The name of the bumpers comes from the supposed similarity between the shape of those “bumper bullets” and the actress’s breasts.

Aside from the headlights, there are also the tail lights and various side lighting that needs to be addressed. With tail lights, you have far more liberty in styling, as long as you keep in mind that ³ ⁴ ⁵:

Now with general styling advice out of the way, we’ll take a look at more specific examples by the decades

American Styling by the Decade

I didn’t realize how much I wanted/needed this thread to exist. Thank you!

These tips are vital for anyone wanting to design the exterior of an old Yank tank from the 40s through to the 80s. Great job!

We need one for british cars

I am inclined to agree, and while we’re at it, there should also be one each for Italian, German, French, Japanese and even Australian cars, for good measure.

That’s a ton of work. Would be cool, but imo no one is a master at all of those. Linking threads like this to titleguy’s more general design tips thread is probably the best way to go about it.