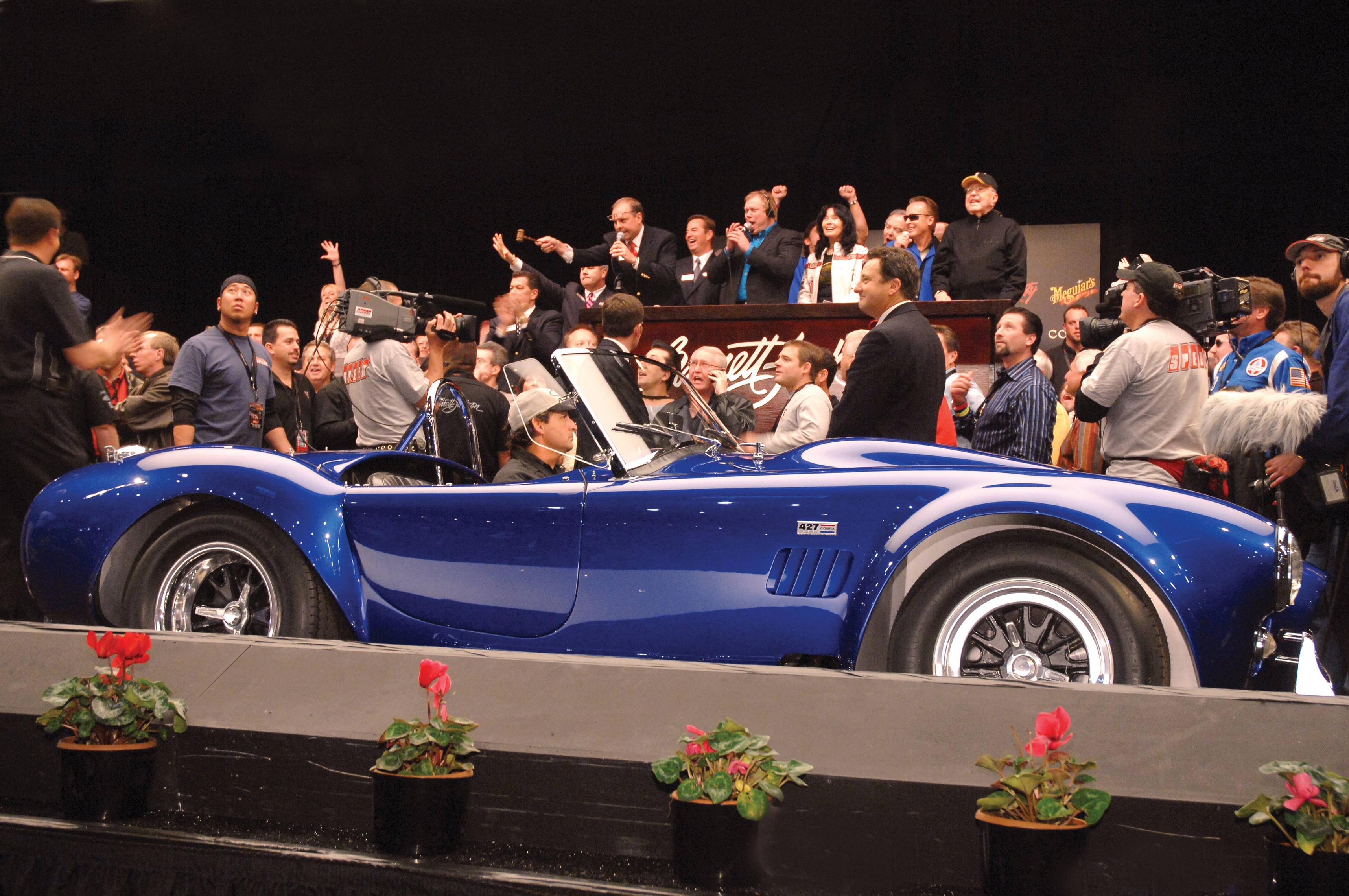 One of the most fascinating events in any part of the real-world car hobby is the collector car auction, where a wide range of the finest and most significant cars in the world cross the block, bought and sold in a matter of minutes, sometimes for outrageous sums of money. That excitement has been missing so far in the Automation community…where there are plenty of fantastic cars, but nowhere for them to “sell”. Ever looked at a Bonham or an Erin and thought, “man, I would love to put one of those in my garage”? well, now is your chance!

So, Who Can Enter?

Anyone can enter this challenge.

What Kind Of Cars Can Enter?

Any car can enter, from any model year. Classic cars older than 25 years old are preferred, but if you have a significant car from any era, even if it’s brand new, it will be fine to enter. There are advantages to entering more valuable, prestigious or significant cars though…more on that in the rules.

I can only make silly meme cars. Can I participate too?

I’d rather not actually. I put dozens of hours of my free time into putting this challenge together and running it each time, so please be respectful of that before you decide to send in a cheap joke. This is your chance to put your very best efforts on showcase for the entire community to see!

Can I use mods?

You sure can! Any mods on the Steam Workshop are allowed.

How Will The Auction Work?

Each car submitted to me will be fed into my spreadsheet to be given an estimated value. When that car’s lot number comes up, it will go on auction in this thread for 36 hours, or until no new bids have been posted for at least six hours, whichever comes first. The highest bid will “win” the car, and the auction will begin anew. If the auction ends early, the new car will be posted at the same time as though the auction went the full 36 hours (just to keep my personal schedule under control mostly).

Before the auction, a fancy catalogue will be published, with an overview of each car in the auction, including lot number, its special selling points, a quick description of the car’s condition and history, along with an estimated price.

First, you need to send me a private message that you would like to register as a bidder; I will then reply to you with your paddle number and the amount of money you can spend in the auction. The amount of money you will be assigned is random; some people will be lucky enough to have more money than others - you can counter this by selling auction lots to make more money!

If a bidder is also a seller, any proceeds from their car sales will be credited to their account, less a buyer’s fee subtracted from the hammer price. The buyer’s fee is 15% on the first $200,000 of the hammer price, then 10% for each dollar higher than $200,000.

To bid on a car, simply post your assigned paddle number, along with your bid in this thread, like this:

Once the auction closes, the bidding ends and the car sells for the highest bid at the end of the auction (the hammer price). All cars crossing the block will be sold with no reserve, meaning that they sell for whatever the hammer price is, regardless if it meets the estimate in the catalogue or not! Bidding increments will be situational, depending on the estimated value of the car, and will be posted with each new auction.

Also, note that the Credit Gasmea (the official bank of CM Auctions) will not allow bidders to spend in excess of their current funds under any circumstances.

How Do I Sell A Car At Auction?

Send me a private message with your exported .car file along with a completed version of this form:

Username: your forum username
Car Make: your company’s name
Model Name: your car’s model designation
Country of Origin: where was the car built; this can differ from where your company is headquartered if it fits your lore!
List Price New (including markups): the Suggested Price from the “Markets” tab in-game, plus any markup you desire
Car Status (Original, Restored, Modified): see below for description
Production Run (Limited, Low, Medium, High): see below for description
Race Car (Yes/No): Was this a race car, or a street car?
Rare Within Production Run (Yes/No): see below for description
Transfer .car file to the winning bidder (Yes/No): Indicate whether or not you wish the winning bidder to receive a copy of your lot’s .car file.

Seller Description Of Car:
Write a few sentences describing why this car is special - you’re trying to maximise the sale price, after all!

Please send at least a couple of nicely composed, neutrally lit pictures of your cars in front of constasting backgrounds as well, so I can include them in the auction catalogue.

Cars going for auction will have one of three statuses assigned to it - Original, Restored or Modified.

Original cars must be “numbers matching”; in other words, the trim year and engine variant year must match, or be matches within reason. Original cars will have a boost in value in some circumstances compared to the other two categories, but they can also cross the block in very poor condition, which will diminish their value. New cars (from 2018 and 2019 model years) will be classed as Original, unless otherwise specified.

Restored cars must also be “numbers matching” as well, but they will have the benefit of a minimum condition value of 75 percent, which will help hold their value above a certain level.

Modified cars do not need to be “numbers matching”, which will give them a diminished value. However, it does mean that you can take an old trim and update it with a different or more modern engine and interior fittings, which can dramatically increase the prestige value of the car - and since bidders will be scored partially on the prestige of their purchases, a Modified car can give you a good score for very little money!

Production Run affects the rarity of your car, and is representative of how many cars your company produced (or plans on producing) of that particular trim over its lifetime. This table is how it breaks down:

If your car is Medium or High Production Only (with one exception), you can specify if the car is rare within its production run. Perhaps it has an unusual engine option, or it’s a particularly desirable colour…all of these would be reasons to say “Yes” for this question.

Low and Limited Production cars are eligible for this under one circumstance - that they are either the first or the last example of that particular model going on sale, and are not eligible to have multiple copies of the same car be auctioned off with this tag.

How Many Cars Can I Enter?

As many as you like! If I see fit to cut cars from the challenge, I will cut them in the reverse order they were sent - fourth submissions will get cut before third submissions, and so on, so that I will not cut a car from someone who has only sent one. If you are submitting more than one car to the auction, please keep them in one PM thread to help me keep this organised. Thanks!

How Much Will My Cars Be Worth?

When Do I Need To Submit My Cars Or Enter As A Bidder?

Can I Just Watch From The Sidelines?

Yes, absolutely, and non-participants are welcome to post in the thread too, if they like, but I would rather see you on the auction floor than off to the sides watching!

I Like To Win. How Do I Win This Challenge?

Well, there will be a number of ways to win!

As a bidder, if you end the auction with the highest total prestige purchased, that’s a win. If you buy cars that sell for a lower percentage of their estimated value than any other bidder, that’s also a win.

As a seller, if your cars sell for the highest percentage over their estimated value, that’s a win. If your car sells for the most of any car in the auction, that’s a win. Note that sellers are allowed, and even encouraged, to post while their car is up for auction, to help pump up interest!

Ooooh this sounds good. I’ll see if I have something good enough lying around, or if I get time to build something new. Looking forward to it! Couple of questions:

Country of Origin: where was the car built; this can differ from where your company is headquartered if it fits your lore!

Real country, automation country, or either?

The in-game prestige score, or a score calculated by you depending on other factors too?

I’m definitely going to enter, Mersault and their century of history shouldn’t go to waste

Real country, automation country, or either?

Either is permitted, but nearly everyone will be using real countries, so YMMV.

The in-game prestige score, or a score calculated by you depending on other factors too?

Some of my rather remarkable cars (unusual engineering, short production run, etc.) are not really prestigous or expensive. Would this bother you or can I submit them as long as they are no meme and actually a serious vehicle?

I am new to this; what a great idea. Thank you for hosting!

You sure you got the right guy to tag?

Should i include my car trim in the Model name: part or should i make an extra Trim: Part to the form?

Anyway, I’ve been waiting for several months to see the next forum auction, and am happy that it has finally returned.

Yes it’s exactly what I mean…what did you think I meant by that?

A date less confronting in relation to my own age and realizations of mortality?

What if… you have a car you got from someone else, legitimately, can you put that up? (you would, of course, then have to surrender the *.car file)

Yes it’s exactly what I mean…what did you think I meant by that?

Its June, 2020 is still 7 months away and I dont think the auction will last that long

OK, a bit of an update on how the auction is shaping up:

Oh damn totally forgot about this, I have to spam some cars