I was gonna save this post for when I actually pick the car up and register it, etc. but I’m way too impatient for that. Here’s the photo of the car in the craigslist advert - I’ll delve into more details once I finally acquire said vehicle.

Ayyyyy congrats man on your first car, and I will say that was a pretty nice choice!

As an example of the last-ever Mazdaspeed/MPS 3 (the new 3 Turbo is more of a cruiser than a back-road warrior) and one of the last few sport compacts sold in the US market before they gained too much weight and power to allow their drivers to fully exploit their performance envelopes outside a racetrack, I expect you to enjoy every mile with it. I still prefer the cleaner look of the pre-facelift original design, though, but at least it kept its punchy engine.

The MS3/MPS3 is not the only sport compact from the Noughties to be available for around $10k used right now, give or take a few grand, as the following article so eloquently shows:

It’s sad that the perfect storm of circumstances that allowed carmakers to develop stuff like the MS3 and its ilk will never happen again due to current regulations being much stricter than they were even ten years ago, let alone fifteen or even twenty, but it was fun while it lasted.

A solid choice in almost all respects

A fellow Speed3 owner I see. Solid choice. They are beasts. And practical ones at that. A bit of advice. Don’t accelerate more than very slightly in 6th gear. The stock HPFP isn’t very strong, and it can cause it to lean out. The one in mine was replaced and I still avoid it for good measure.

I will never get bored of the fact that unless you read it and just hear it, this car claims to have a dizzy turbo.

Howdy! I’ve officially taken delivery of the car - getting it registered next week so I can drive it up to school. Here’s some more pictures, I have to give it a proper clean but otherwise this is what you’re gonna get.

I must admit that it’s an example that looks a lot better from further away than upon close inspection - there’s some damage that I didn’t really take into much consideration previously that’s only now beginning to cross my radar.

The rear bumper is pretty tattered…

…And the front bumper has a crack in the plastic part.

I drove it from Brooklyn back home to Suffolk County, which - including traffic, and discounting a stop at my grandparent’s in Queens - was about an hour and 15 minutes, in which the car performed admirably (albeit with my more-conservative-than-normal-because-mom-was-in-the-passenger-seat driving). There’s a weird thumping sound that emanates from the rear left every time we go over a sharp bump, but for whatever reason it doesn’t really make a sound over speedbumps or changes in the asphalt’s quality. The car also vibrates a bit at highway speeds although I suspect that’s just Long Island roads on a stiff suspension set up - the tires also look like they may need a replacement soon.

When I have the chance I’ll show more progress photos on cleanup or any issues that arise.

A little bummed it had some cracks and scratches, but I believe so some alcohol & elbow grease can get the little scuffs on the back bumper off. Idk about the cracks, but they seem barely noticeable. About the thumping sound then I don’t have an answer for that. I mean my mom’s van’s breaks are very whistley, but those are two different things, and considering that since I have been to NYC the Long Island roads on stiff suspension could most likely be why is vibrates a bit. My mom’s van does it too on the Floridian highways sometimes so it doesn’t seem to uncommon. All-n-all it seems to be a very nice first car. A fun car with economical tendencies.

Could be worse. Mine has deep scratches in the hood from where a tow truck backed into it.

And yeah, the stiff suspension does make it so rattles are much more noticeable. Although I’d suggest inspecting your sway bar links. Mine had a rattle going over bumps or making sharp left turns that ended up being my front left link. I went ahead and did both to be safe.

We’ve got some good news and bad news. Good news first! I finally gave the car a well-needed deep clean from the ground up primarily using Chrisfix’ tutorial. Additionally, I believe to have located the source of the sound - it’s the foam padding under the rear trunk that houses the tire, etc.

Now for the bad news! The DMV is backed up by 6 weeks and I can’t get my car registered so I won’t be able to take it up to university. For now it’ll be chilling in the garage and I’m taking a 2005 Honda Pilot to school, but I’ll miss this car a lot until then.

@titleguy1 Get into the AAA, become a member, get your DMV work done. I have not set foot into the DMV in the last 15 years.

We tried this, but because of whatever regulations New York has put into place we can’t get new plates for the 3. AAA only does registration renewals, and for this car I’m getting an all new registration. I also only have 1 day for this transaction to happen so even if they did provide plates I don’t think they would come in time for the 250 drive to my school.

I figured that it’s time for a small update. I got my plates back in late September and my parents dropped it off, so I’ve been driving it for a few months. No major changes have been made to the car, but it’s made it’s way up and down from my university.

The fun part starts now - I took the car to get serviced about a week back along with a mild complaint about the front brakes being touchy and the rear suspension having a slight crash-y sound to it. Turns out the front brake rotors and pads were shot along with the rear sway bar links - that’s a cool $700 in combination with the oil change and inspection right there, but at least it’s clear until 2021. 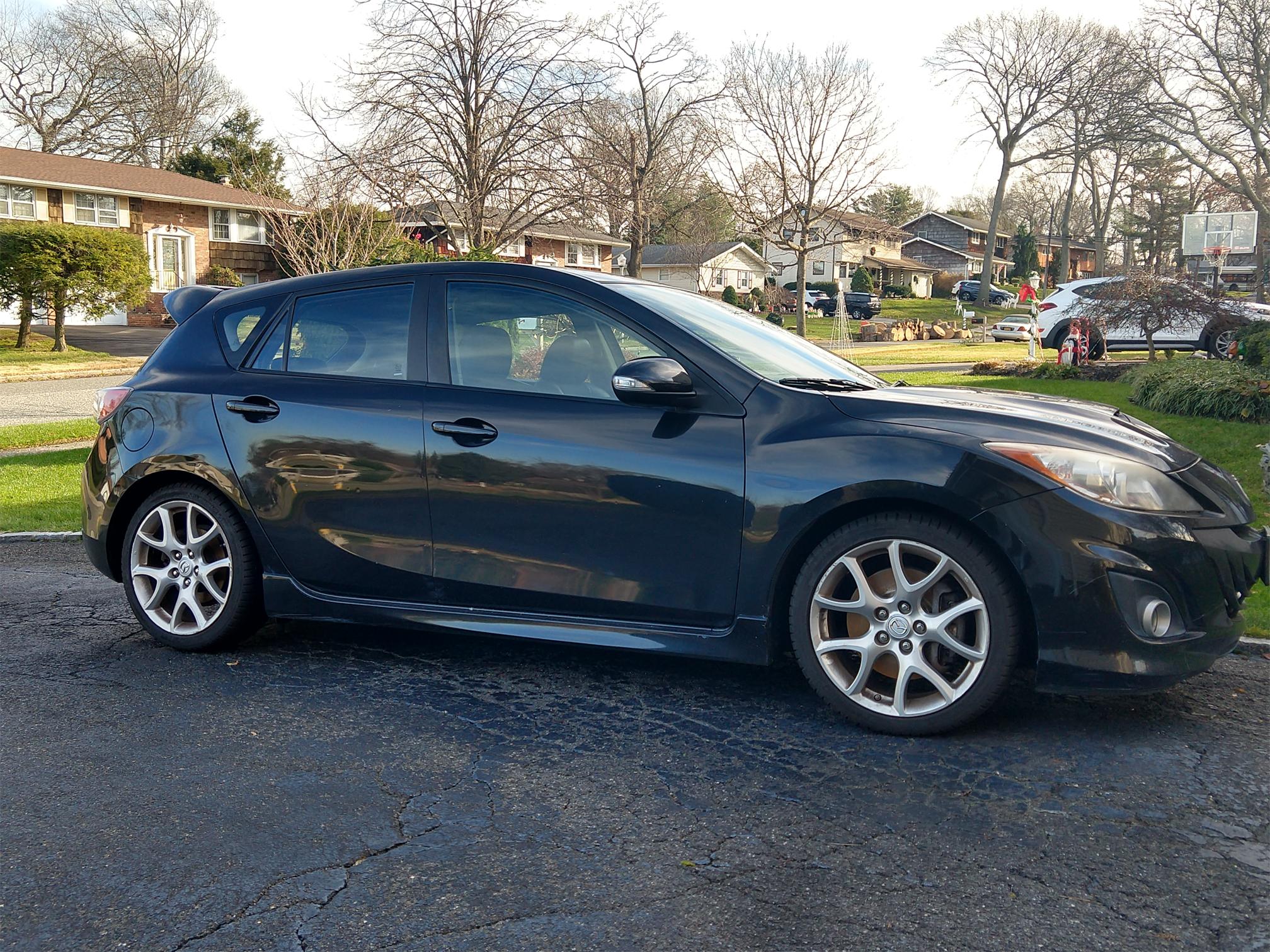 I’ll have to check some other things such as the spark plugs to see if those have ever been replaced, but honestly as a first car owner I’m not sure how/what things to check for, esp since the car is sitting at 93k miles. We’ll figure it out though!

Now that we have cooler, denser air - how’s the power?

I remember when I had my Taurus SHO I was messing around with a pre-facelift MS3. Holy gaptism those things are quick.

Anytime I buy a used car, the first thing I always do is change all the fluids. Beyond that, I join forums that are specific to the car to learn all about their (cue Daddy Doug voice) quirks and features. You’ll pick up on a lot of what to check for and it’ll be more valuable for you because it’s vehicle-specific.

Congrats and good luck with your MazdaSpeed 3!

Funny you mention rear b]rakes and sway bar links. I did mine a couple months ago (except it was my front links that were bad). Granted I was a DIYer for a few years before I even became a mechanic, so I do all work myself.
The ride on these is a bit on the harsher side, and they will have some weird noises. I just ignore the minor ones on mine and it hasn’t had an issue. Also I don’t know if you did this or not, but I’d suggest running 5W-30 over the 5W-20. Bit of a safer bet for the bottom end, turbo, and chain.

Since you’re nearing 100k, I’d change out as many of the fluids as possible. Coolant is usually due around that time, you want to replace brake/clutch fluid every 2-3 years irrespective of mileage, and I personally change my trans fluid every 30k on all my cars (I do transfer cases and differentials at the same time as that). Also change the serpentine belt every 100k, same as the plugs and coils. Definitely don’t cheap out on either one. You still have some time, so no need to buy it all at once. I’d consider doing some of the basic stuff yourself to save some money as well. Like your oil and trans fluid, both are super easy (just annoying with the cartridge filter for the oil. You also need to remove the airbox to fill the trans fluid. Mine has a pod filter instead of the stock one, so it’s quicker)