Since nobody did object against me hosting the TMCC21, despite giving the chance, I want to welcome you to…

Rules can be discussed until 3 PM (GMT) the 1st of september, then submissions will start.
Deadline (in case nothing happens) - 3 PM (GMT) the 15th of september. Before that I want the .car file sent via DM and a description of the car posted in the thread.

In case the engine designer update will drop before that, deadline will be extended to 3 PM (GMT) the 22nd of september, and ONE resubmission will be allowed. 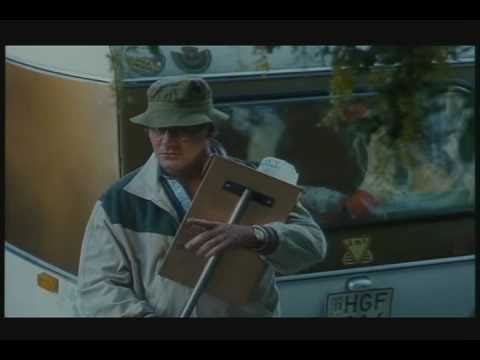 Maybe a little more inspo (even if it’s not supposed to be a copy of this). Sorry, not sorry for the language of bork.

A reoccuring gag will be the car being filled up with junk for one reason or another, so space is needed. It might even be towing a caravan at some point (but since tow ratings are a bit borked I won’t care about them, only the utility stat in itself).

What about load capacity and cargo space? Surely those have to be factored into the practicality calculations.

Well, as I have understood it, cargo space affects utility while passenger space affects practicality, so you can’t really sacrifice one for another without hurting one of the stats. Load capacity is utility AFAIK, but too much load capacity most often means stiff springs hurting comfort. I will look mostly at the stats, but if the raw numbers are too silly (like 100 kg load capacity or 100 litre luggage space) it will clearly hurt the possibilities to win even if stat numbers are good.

one tip for readability

pls put an empty line of space in between each rule 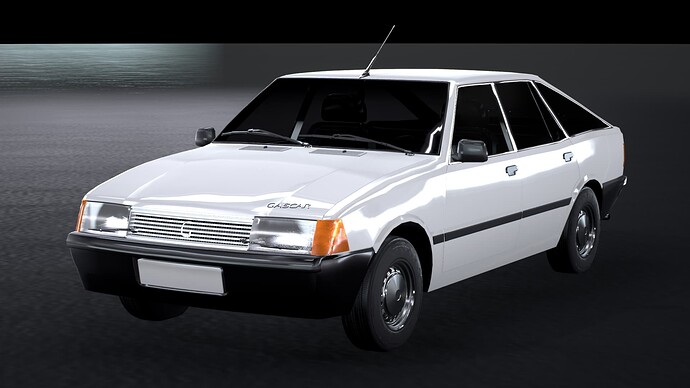 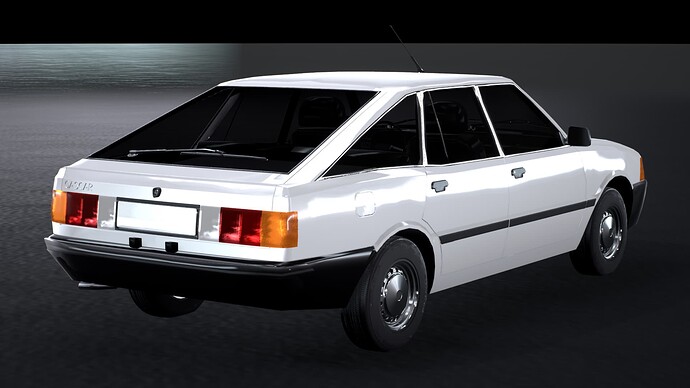 2 QUESTIONS THAT HAS BEEN ASKED LATELY AND THEIR ANSWERS.

Why no mentioning of 4 door sedans?

Because it won’t look as hilarious on TV when the car is loaded up with junk if it is all hidden in the trunk. So, no regular sedans this time.

Nah. Manual or auto is up to you to decide, both have their drawbacks when it comes to important stats here, and both were common during the era. However, I am leaning towards a ban on advanced autos. They give too much of an advantage, and sure, they were around at the end of the era, but we aren’t looking into the luxury class now

Any rules regarding negative quality?

I would say that’s kind of a “soft rule”. Used in moderation, fine. -1 interior quality on something supposed to be a budget car is nothing that will send you to the bin. -15 on everything to be able to fit a twin turbo V10 is a one way ticket to the bin. In between that, use common sense. 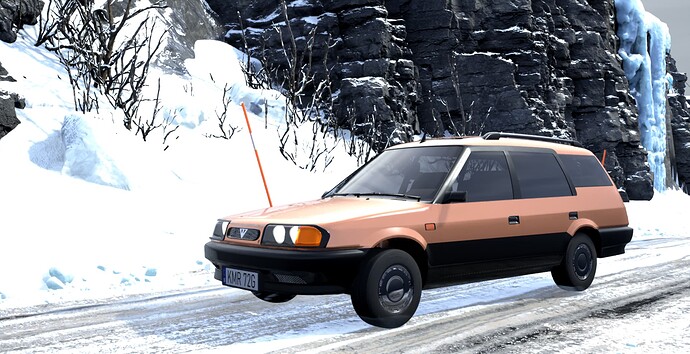 Photo222_1,920-9861920×986 236 KB
The car from the Future…as seen in 1982.
As we all know Japanese cars totally never break down or anything, at least if “well maintained”. Luckily Biltema has both a Haynes manual and lots of parts available.
Manual and no ABS because obviously Stig don’t need a car that thinks it can Car better than himself. It does have Electronic fuel injection, because that’s NASA grade high tech and superior to carburetors.
Other quirks & features that might brighten boring family life:
6 Likes
Knugcab 1 September 2022 07:08 #9

Another question I forgot

Will AWD be allowed?

Since Subarus and Tercels were around and fits the brief very well, yes. I feel that I can’t put a ban on it then.

Wow that’s a funky wagon you have there.

Almost too funky for a boring and mundane Swedish family.

Luckily I have a solution. It’s a car. 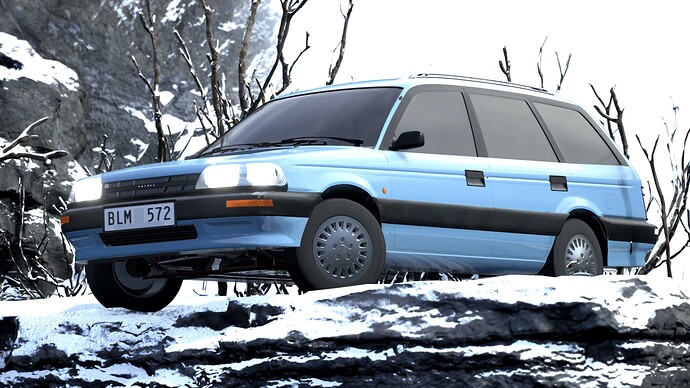 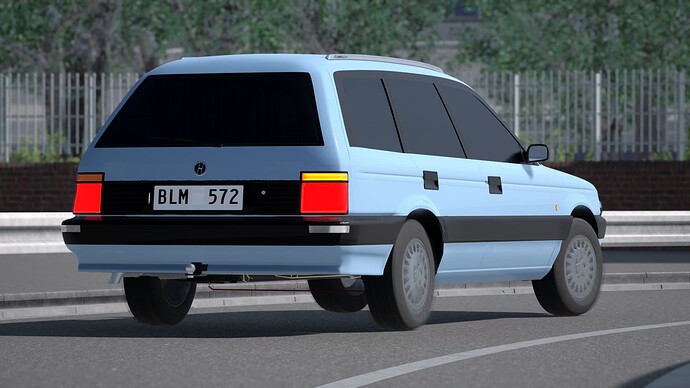 Look it can turn.

BODYSTYLE: Preferred bodystyles are 5 door wagon or 5 door liftback. Other allowed body styles are MPVs, SUVs and passenger vans, but they will be put at a disadvantage due to not being as “typical” family cars back then. No other body styles allowed.

So what does this mean for 3-door wagons; are they allowed or not?

Not. Only bodies with rear doors allowed, should maybe clarify that a bit, thanks.

We would like to introduce the 1984’ Valentine Valkyrie-FT, This is the perfect everyday family utility vehicle with just a touch of sportiness utilizing a rear biased AWD - Uton 4.3 inline 6 tied to a 5 speed stick. Premium 8-track & interior will make you feel like you’re traveling in style while achieving almost 20mpg on average. This vehicle falls at a very comfortable 21K making it an easy to reach, comfortable economy family vehicle. 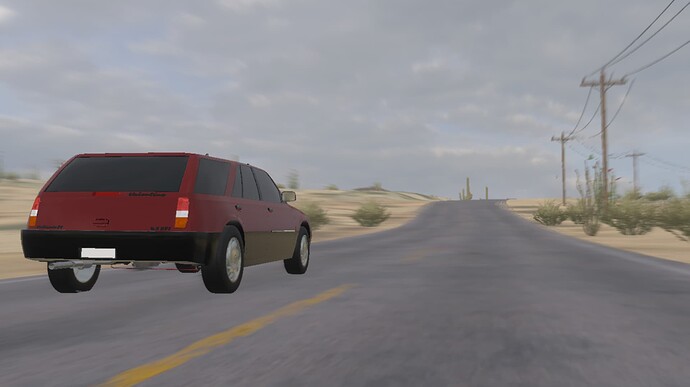 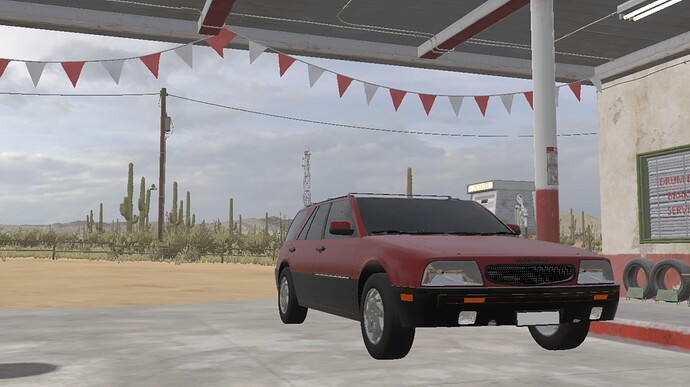 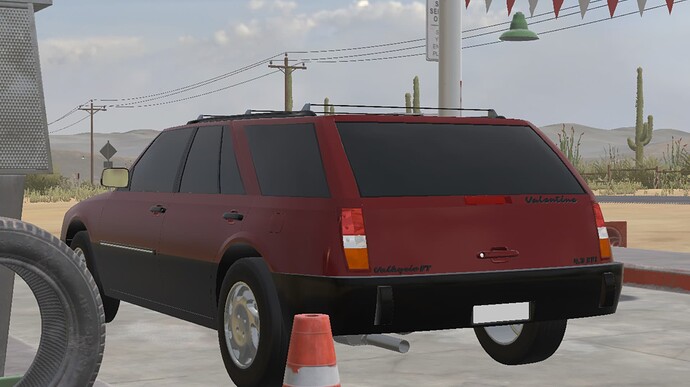 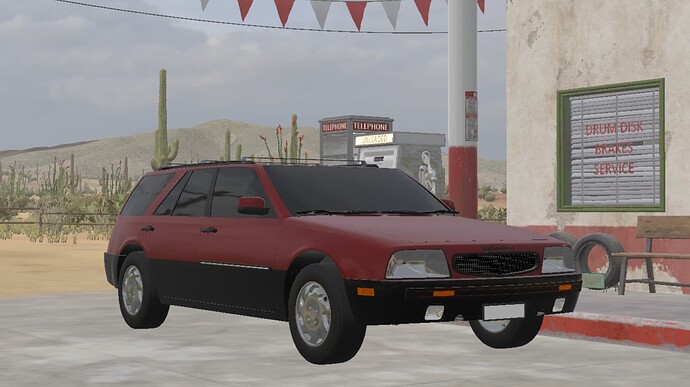 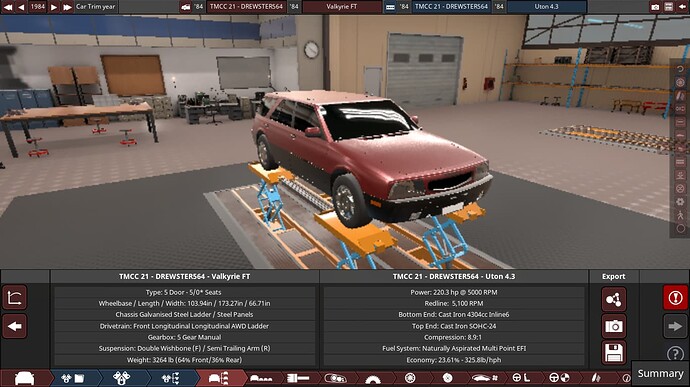 When the main goal is to get there 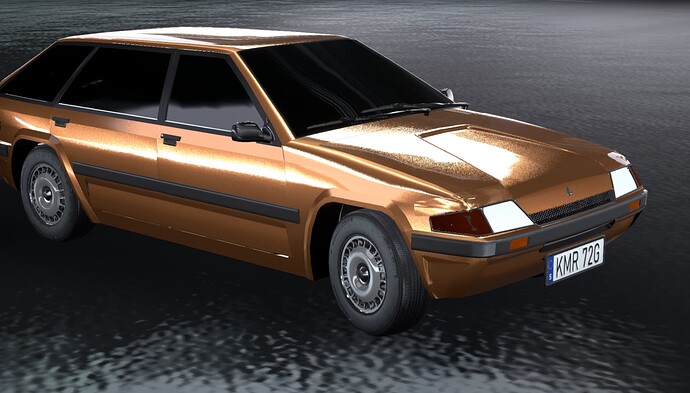 When all you want to do is just arrive 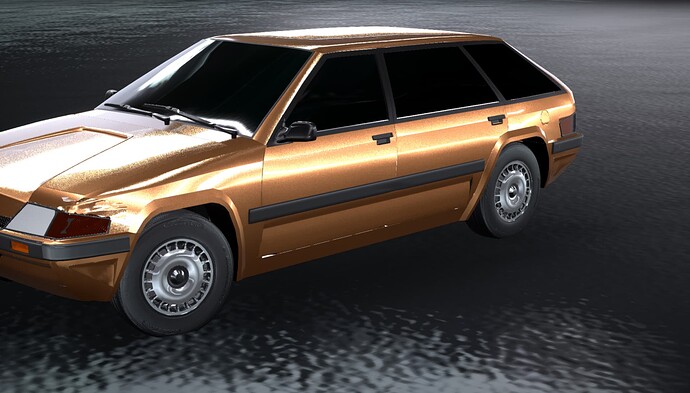 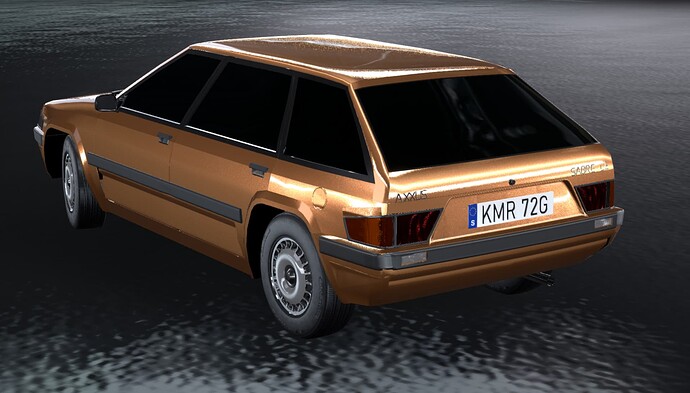 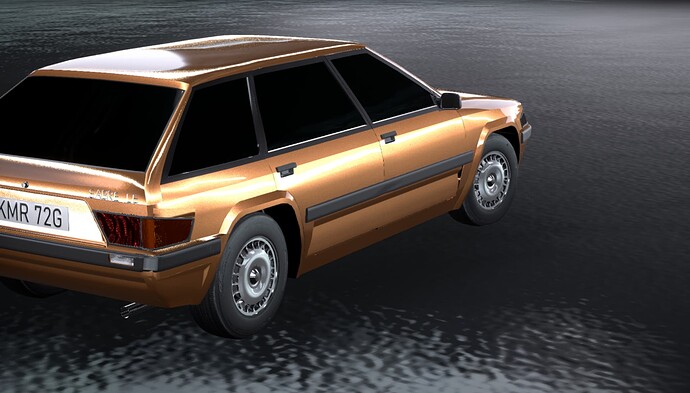 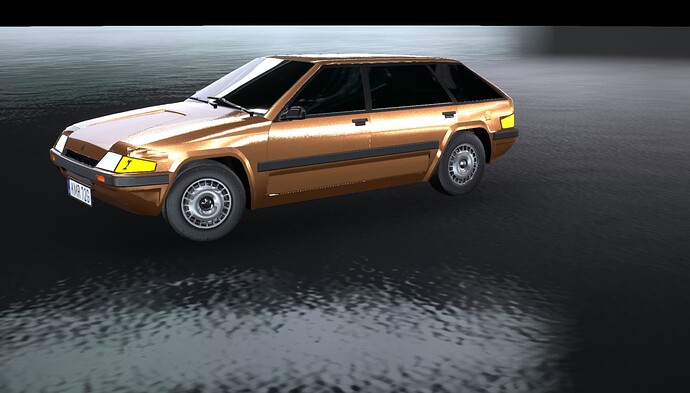 1986 FMC Gannet for sale
A few dings, paint and wheels could use a cleaning, fresh off lease so it’s basically still like new 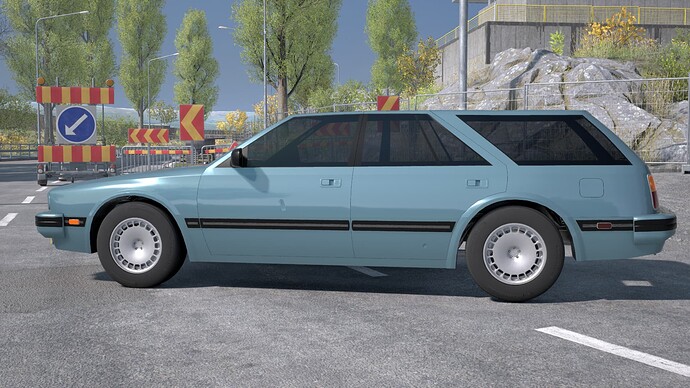 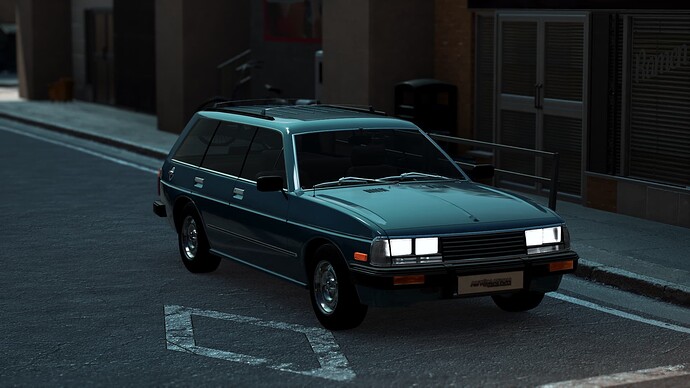 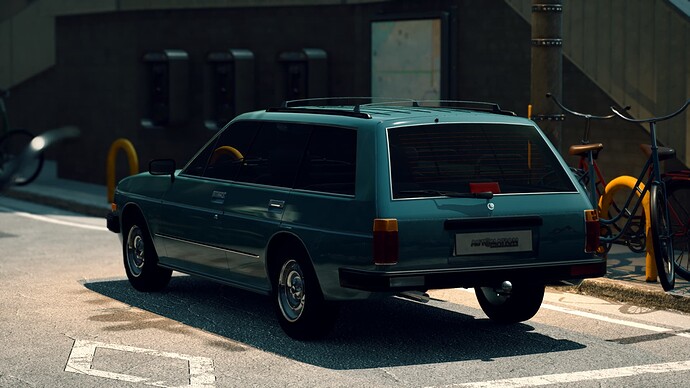 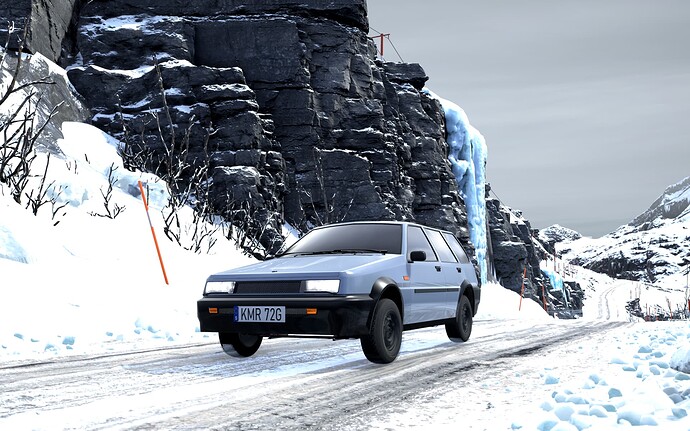 Ishikari is a Japanese manufacturer which loves mating their small, economical engines to their simple AWD system for those thrifty drivers who love venturing off the beaten trail. 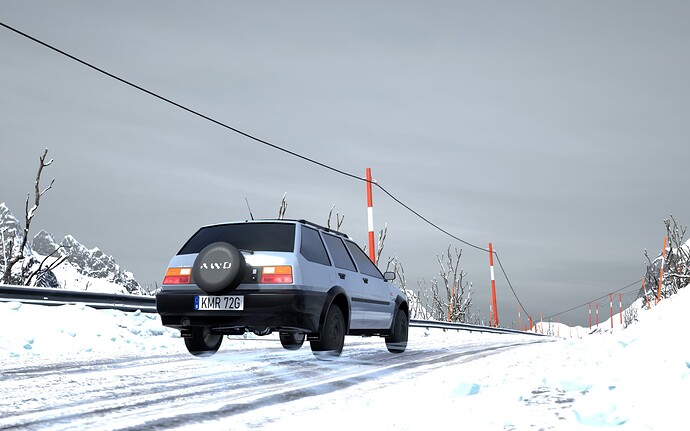 The SE package is complimented with further protective plastic cladding, a full size spare wheel and an integrated roof rack. 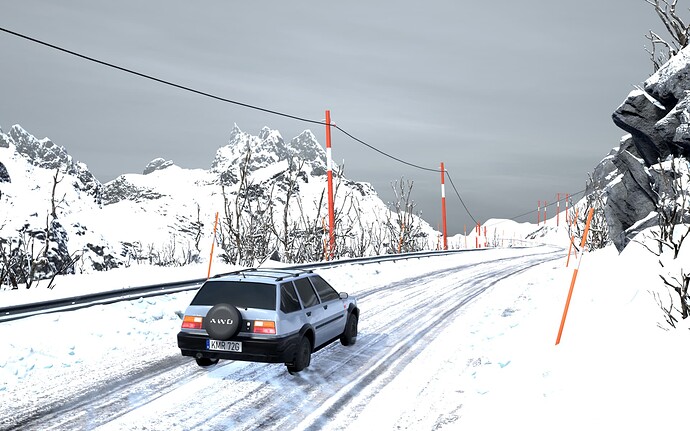 There’s a little wear and tear here and there, but it’s all cosmetic. 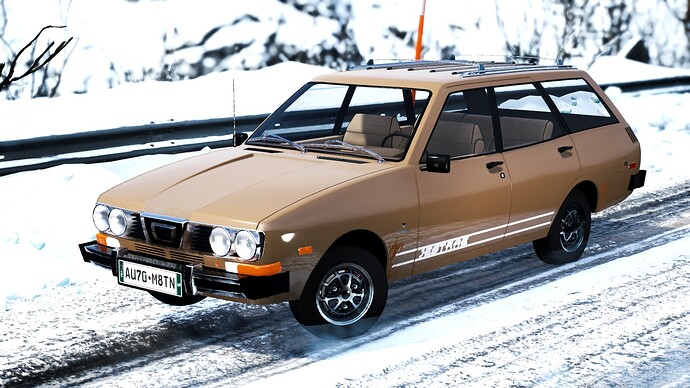 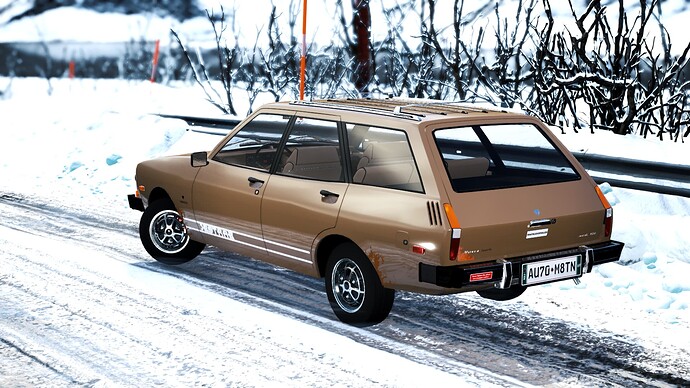