Torrento Automotive was founded in the United States in 1921 by Stephen Torrento. Not much is known about the early days of the company, but we do know that it ended up creating a car company and becoming a highly profitable megacorporation (Torrento Industries Ltd.) later on, producing everything from refrigerators to tanks, all the while competing fiercely with rival company Akamatsu. Torrento Automotive has three divisions, those divisions being Torrento of America, Torrento of Europe, and Torrento of Australia. These three divisions operate almost completely independently, which can sometimes make for quite the show when it comes to lineup variety, with brand new models being created that fill in the same demographic as already existing models occasionally. Everything from affordable economy compact vehicles to expensive muscle saloons goes.

The 2006 Torrento Redback V8, the premier sedan offering from Torrento. With a frankly insane 400 horsepower to the rear wheels, this is one quick (and very hard to drive) sports sedan. It was also designed by Torrento of Australia, because why not. 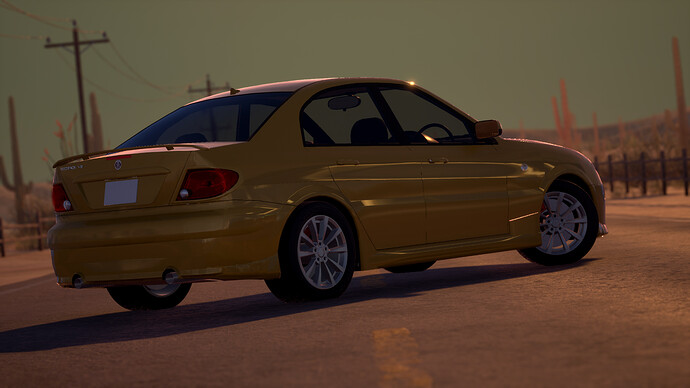 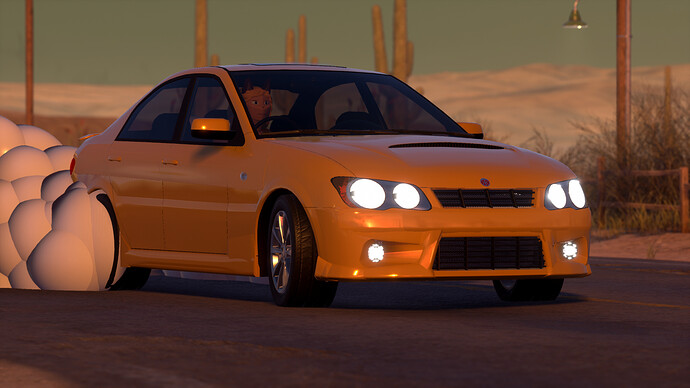 also, do the CSS thing work?

I’m not sure what you mean by CSS thing, these posts have had no CSS black magic b̶e̶c̶a̶u̶s̶e̶ ̶I̶’̶m̶ ̶a̶ ̶m̶o̶r̶o̶n̶

That’s one deadly arachnid! Not only does the car look good generally, but I think you’ve captured the AUDM design taste really good also. I look forward to seing your cars around the forums in the future, as that future will be very badass; badass indeed!

this is one quick (and very hard to drive) sports sedan

Why, then, is it so hard to drive? Is it because of the tire type and/or sizes? After all, in 2006, it is possible to make a 400-bhp car easy to drive with the right trim choices.

Exactly what I thought too. This is a very promising start indeed. I want a Redback now, lol!

Wasn’t there a Torrento thread before?

The 2006 Torrento Redback V8, the premier sedan offering from Torrento. With a frankly insane 400 horsepower to the rear wheels, this is one quick (and very hard to drive) sports sedan.

I just took this car for a blast around ATT in Beam.NG. I drive with my keyboard so I was expecting a car that has no traction, snap oversteers and killed itself within half a lap. I was wrong. This car grips well, goes hard and is really fun to do lap after lap. It seriously felt like I was driving a car from Forza Horizon 4!

Faults? The Torrento Redback V8 has a lot of understeer if you’re pushing too hard into a corner. So drive it with precision and you’ll be golden. PM Leone and ask for a copy; it’s totally worth it.

Oh, you’re here too. Well, in that case, welcome to the forums, you can develop your lore here as well as share your designs. Be sure to visit my IVERA Motors thread, there you may find Torrento and Akamatsu might have some swedish competition. (Warning: the thread is currently only going over the founding history)

The 1992 Torrento Kamaishi is a cheap, economic, practical, and tough hatchback. It’s small, will get you where you need to go, won’t blow up on the way there, and is mildly sporty if you get a trim that isn’t the base model.

man I am not very good at editing photos 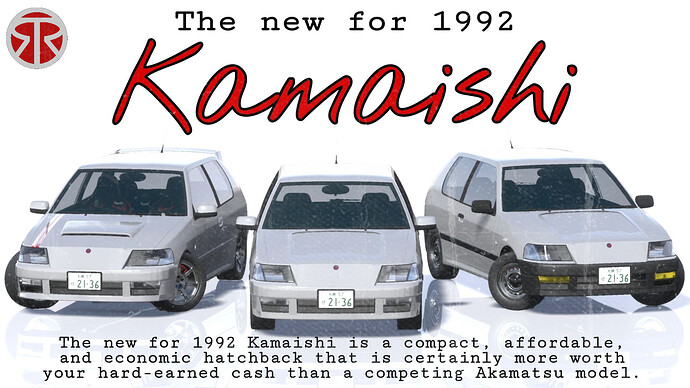 The Torrento Azreia: The official car of being referred to with gender pronouns in advertising campaigns. 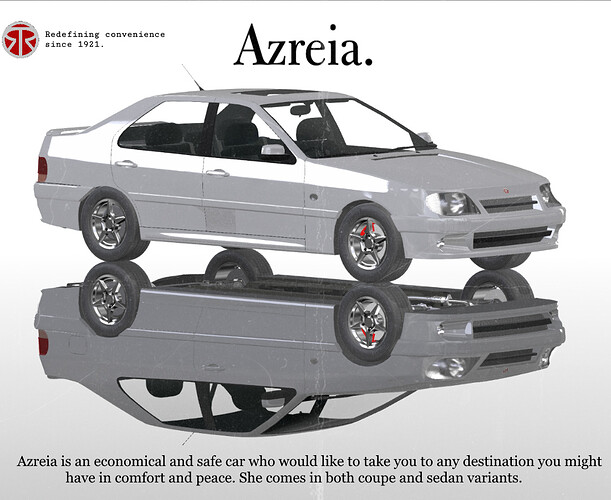 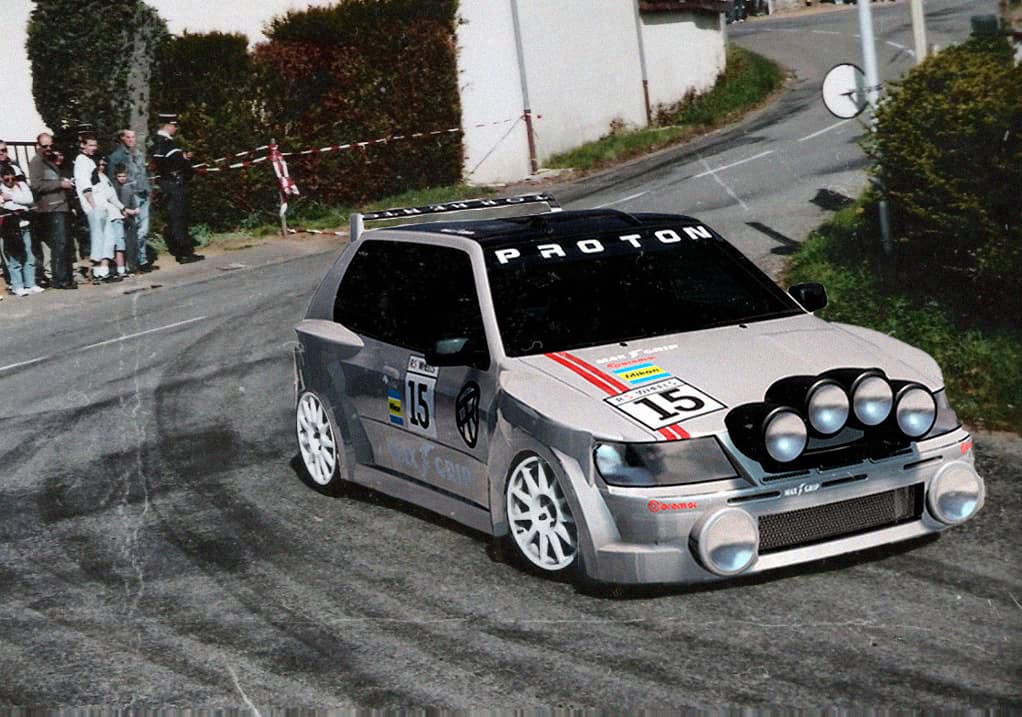 The 1996 Torrento Azreia: The 2002 Torrento Azreia, except older, and different in about every aspect aside from door count, alloy rims, and the engine, which is completely identical. 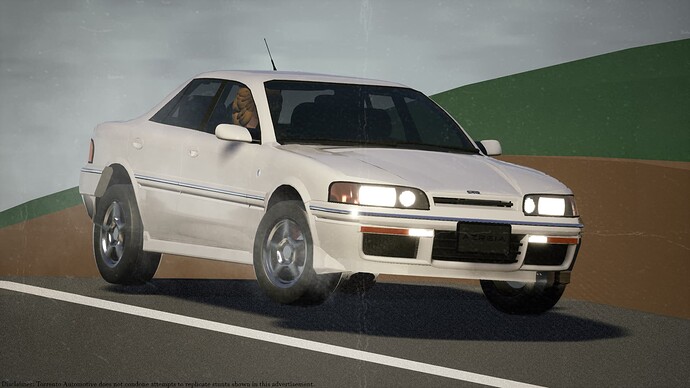 you cant tell me what to do

i will attempt to do the stunts shown in this advertisement

But then you can’t buy or enjoy Torrento products, and that’d be a real shame!

The 1996 Torrento Azreia TSR. Much like a regular 1996 Azreia, except it has “276” horsepower, AWD, an aggressive bodykit, and (quite literally) a loveable personality.

You may be wondering about the aforementioned personality.
The Azreia TSR is equipped with a cutting-edge display system in the dashboard that displays status messages and reminders in such a way as to make the car feel like a person, albeit a person who can’t do much more than politely request that you refuel, put on your seatbelt, check the engine, etc. This sounds all well and good, but sadly it was extremely expensive and caused the lot price of these Azreia variants to skyrocket to over $36,000 when it was new. They were also more expensive to manufacture, which lead to only approximately 13,000 being produced. 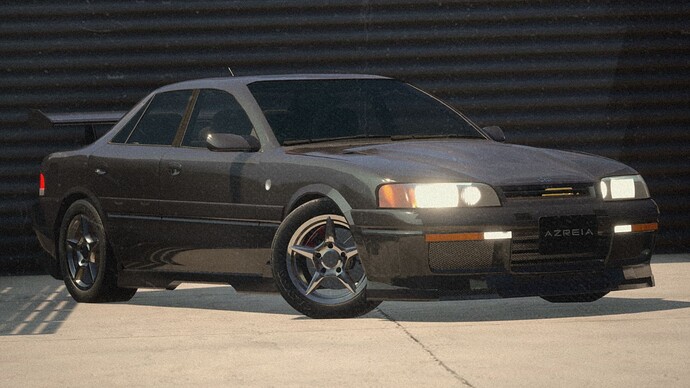 I like the 1996 Azreia. I get some vibes of the Ford Scorpio (the pre-frogeyed one) but much better looking. 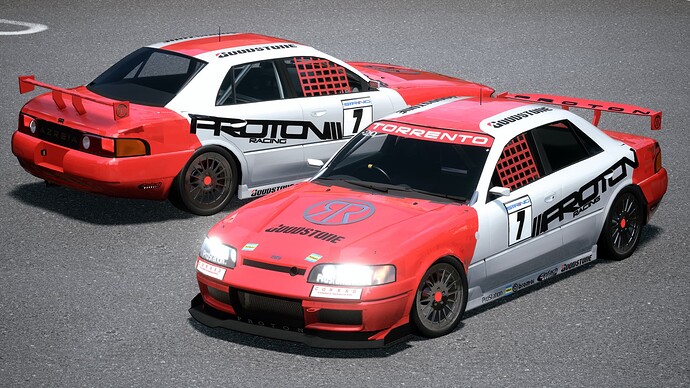