Ultimate FWD Competition THE RESULTS ARE IN!

Alright you sexy bastards. The entries are in and the results have been calculated. A transformer blew at the shop so we got to leave early…

ATT prizes
1st: My Niece’s spelling bee trophy
2nd: 3x3" piece of stamped aluminum that had the number “2” etched into it at some point in its manufacturing process.
3rd: A one month subscription to US weekly.
Everyone Else: Everyone else gets a dull steak knife hot glued to a bottle of house-brand mustard to indicate that you couldn’t quite “cut the mustard”

BTT Prizes
1st: One foot piece of a brass curtain rod soldered to a brass base plate, which was then glued to a wooden square with the words “You’re winner!” on the front. (not a typo)
2: A photo of the cast of The Matrix signed by the guy who took it.
3: A broken tachometer from a 1993 Ford Mondeo.
Everyone else: A photocopy of a badly drawn picture of an empty hand in a room full of candles to show that you weren’t able to “Hold a candle”

As an added bonus, since you guys likes this one so damn much, I will be starting a new race around the same time. If you like, I will create a strange, weird, odd ball race every time the desire takes me.

Some races I’ve already lined up include:
The 3rd World Rally Challenge,
The Soccerball Run,
The Getaway,
Grandma’s Sunday Afternoon,
The Russian Invasion Contract,
And The Family Christmas Holiday.

Few questions, assuming year is 2014 Can we adjust aanything else between stages?

I have an entry into this comp…

Looking forward to seeing how I compare with my competition

This is the view that the Bogliq Revstar will have of the Ardent Smoke:

And for everyone else, here’s another angle…

lol wow I can feel the heat from the flame from all the way over here xD Why so specifically addressing the Boqliq? Though I note, that Alfa shell, doesn’t it only fit 245mm fronts?

There’s a story to this one. As I said, I’m not looking to win, as this car will DEFINITELY not do well on the Salt Flats (I can only get it to a piddling 358km/h). However, the lol value of the story more than makes up for it.

Strop (yours truly) drives, as my profile states, a Honda Civic VTI-s MY13, in this colour:

I love it, though not for its drivetrain, which is geared for efficiency and smoothness, and not actually driving. It also doesn’t really let the revvy 1.8L iVTEC i4 strut its stuff, though with a measly 108kw at 6500rpm, it’s nothing to write home about. The suspension, too, is firm yet not pliant on the rougher roads of Australia, but attacks mountain passes with stability and eagerness (though this could be to do with the fact the front suspension is misaligned and is actually giving me a slight negative camber, something I have declined to fix as of currently). It’s a car that does brilliantly on the Autobahn but less so elsewhere, but it looks like it came from outer space, it’s got the kind of comfort I like (firm but well positioned), it’s very versatile and can carry shitloads of gear, and for a cheap car it’s very refined. It’s just not fast (10.3s to 100km/h, 17s to the quarter mile, with a top speed of about 210 because its leisurely 5 speed auto is geared to 338km/h… not that I’ve ever reached 210 in it.)

Okay enough about my Civic. This is the car I’ve taken with me into this fictional universe in which the events of Automation play out (in my head and now increasingly, in documented fiction). So this is the car Stroppy McHorseguy drives, and will be driving, until it falls apart, i.e. never, because it’s a goddamn Honda (made in the UK, not Thailand). It is also the subject of many a joke at the Gryphon Gear factory, because it’s a goddamn stock Civic and completely anathema to most of the crazy shit that the GG team like doing. After nearly 2 years of seeing that car, they decide to stage an intervention.

What would seven mature adults, some of whom are married, some who even have kids, do about Strop’s overly sensible choice of car? Leave it be? Persuade him to buy a sportier car since he hasn’t got kids?

No, they steal his car and modify the hell out of it without his permission.

While Strop was reporting his car stolen to the police, the team managed to hide it away in one of the prototype garages where, over the next fortnight, the tirelessly slaved over it, cramming in parts from god knows where. It got chopped, lowered, tubbed, stripped, reframed, and stripped again. It got a wide bodykit BOLTED onto the sides. It got a double wing attached to the FRONT of the car a la Chris Rado Time Attack FWD. It got a reconditioned, restroked ex-Formula 1 v8 off the black market with the turbo removed and retuned to 500bhp. It also uses 305mm wide Pirelli Zero Trofeo R tyres (unfortunately the game doesn’t let me use the exact specification of tyre that actually exists, so we’ll just have to make do).

When Strop discovered this, he was horrified. This wasn’t his Civic anymore, it wasn’t even a car he could really drive on the roads, much less take a trip with his girlfriend (let alone visit his mother!!!). But it was damn good for one thing, and that was racing.

Therefore I present to you, Strop’s Honda Civic (Rado Edition). Not actually tuned or endorsed by Chris Rado Racing, but named simply in homage to one of the craziest nut jobs on the racing scene. 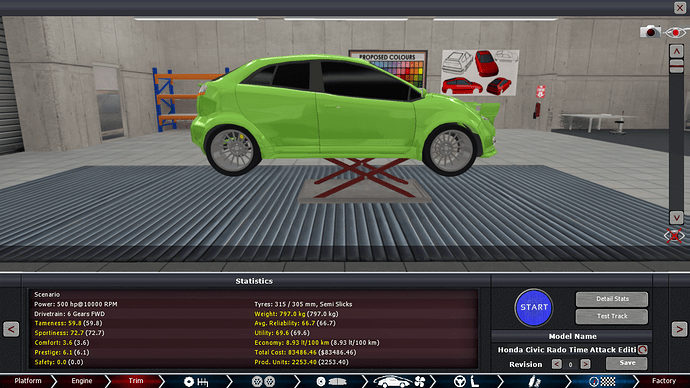 [quote=“strop”]lol wow I can feel the heat from the flame from all the way over here xD Why so specifically addressing the Boqliq? Though I note, that Alfa shell, doesn’t it only fit 245mm fronts?
[/quote]

It’s also tongue-in-cheek because I suck at making performance cars.

[quote=“VicVictory”][quote=“strop”]lol wow I can feel the heat from the flame from all the way over here xD Why so specifically addressing the Boqliq? Though I note, that Alfa shell, doesn’t it only fit 245mm fronts?
[/quote]

It’s also tongue-in-cheek because I suck at making performance cars.[/quote]

It IS a competition after all, so there has to be SOME trash talk, lol

Ultimately the truth’ll come out on race-day

Oh is that so huh?

Let me remove my obnoxious censor then…

…so is this what we have huh? Well, I thought the Civic didn’t have a chance, but if this is the kind of competition it has, this should be a walk in the park

Let me remove my obnoxious censor then…

…so is this what we have huh? Well, I thought the Civic didn’t have a chance, but if this is the kind of competition it has, this should be a walk in the park

Seriously though, best of luck to all who are competing, I’m not bothered about winning as entering these comps keeps me from getting bored!

So, since I expect to come last, I’m just happy if I place anywhere and the only way I lose is if I don’t enter in the first place!!!

This is the view that the Bogliq Revstar will have of the Ardent Smoke:

And for everyone else, here’s another angle…

[quote=“HighOctaneLove”]
So, since I expect to come last, I’m just happy if I place anywhere and the only way I lose is if I don’t enter in the first place!!!

You can own this design in real life!

Just buy yourself a Mitsubishi Starion from the early 80’s; the JDM only mid 80’s ones even had big flares

FYI: The Starion was the direct predecessor of the 3000GT (Sometimes known as the GTO) and had a SOHC 4G63T! (Of future Galant VR4 and Lancer EVO fame in DOHC form)

Alright, guys. It’s time to step up things a little bit and at least try to come up with some competition for Strop’s car

And AMW does so with this van sent from hell, the Van Silly [size=50](which also sounds like a dutch surname, like in Robin van Silly)[/size]

This beast is powered by a 3.7L NA V8 which puts out 575hp. Of course, that power only goes to the front wheels because that’s what this competition is about. And with a total weight of just 831.7kg, it reaches 200km/h in under 10 seconds despite constant wheelspin due to the lack of traction or stability control. Cornering will be tricky, though, as this is a high-powered FWD car and it’s gonna understeer like crazy, but so is everyone else’s car (at least that’s my hope).
Also, i should point out that if you want a practical, user-friendly car that’s usable every day and in any weather condition, forget your Ford Galaxy or VW Golf because the Van Silly offers higher utility than all of those (according to the game). 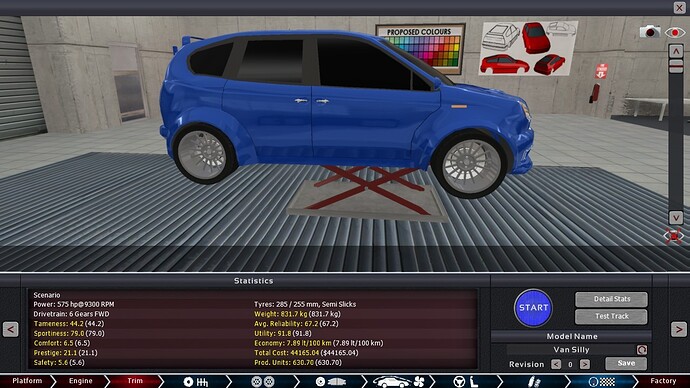 And Strop, could you explain to me how your car costs more than 83k to make when we’re not allowed to use carbon fibre?

I welcome this new addition, 575hp in a FF van is pure awesome. My Civic has a power:weight ratio of 623hp/tonne, but this work of Van Silliness takes it up to 691hp/tonne! Though for some reason my car is significantly faster around the track with a less stiff chassis so I put the chassis and body quality down to -15 and as a result it gained quite a bit of weight. On that note hang on Tom, just let me make sure I haven’t accidentally submitted with carbon fibre as is my habit…

…nope, it’s glued aluminium with polymer panels! Basically since the costs exponentially increase as the quality slides up, the gains from 12-15 are a killer. If I knock everything that is marked 15 to 0 (i.e. most of the non-cabin components, and the whole engine), the cost virtually halves (and the man hours drop by about 90% or something ridiculous). My engine’s a pretty crazy do as well because it only fits a 3L engine and I wanted to pump as much power out of it as possible while revving to 11k rpm.

Using some suspension and downforce witchcraft, this car has relatively neutral turning characteristics: 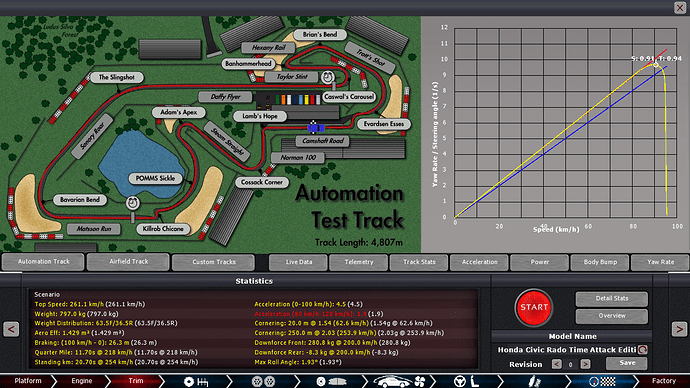 And for those who want a benchmark, this thing makes it around the test track in about [color=#000000]2:11.7[/color]. For the Bonneville Salt Flats, I changed the aero and the gearing, but I’m still rather sure Tom’s van will outpace it due to that superior horsepower.

And I was getting happy with my 2:15 damn it strop! back to the drawing board… maybe 265mm all around is just too narrow for 750hp.

I totally didn’t put points into chassis/body quality. Silly me! Well that would have improved my lap times but as you may be able to tell from my cars name, my goal in this challenge was to have fun, and so far i do

I know Toms van breaks the 2/4 seater rule but, because he’s Tom and because he’s fricken special, he gets a van.

That’s very nice of you, VosNox

You know, after the race i can easily invite 4 people, including VosNox cause he’s the host of this competition and the top 3 (in case neither VosNox nor myself finish in the top 3) to celebrate this awesome competition together and we would drive to the next club in no time! And when we’re done with the club, i can still fit enough crates of beer (or champaign) in the trunk for everyone because it’s a van