As of 2019/10/29, Daiki is no longer active, and this thread has been repurposed to show my cars without lore.

Contents below are kept here for archival purposes.

Daiki Automotive is an automotive company in Japan, always striving to create cars that are fun by one way or another.

It was established in 1950 in order to develop cars for people after the WWII ended, producing its first car, Runner, in 1952. Various cars were made from it, and eventually the company started exporting its cars.

The Crescendo brand was made in 2001 in order to sell more high-end luxury cars since Daiki was mostly dedicated to making less expensive cars, thus making the main brand seem more like a everyday car manufacturer rather than a luxury car manufacturer.

Bit bland. What engine does it have? Post some specs!

Bit bland. What engine does it have? Post some specs!

Thanks for the feedback!
Engine spec:

Engine isn’t fully optimized as it is only sitting at 91.4 RON so I can only assume you are using 95 RON fuel. Bring up the compression for an extra few ponies and better efficiency

I’d like to see what fuel system it’s running and such.

Thanks for the feedback.
This car runs Regular Leaded fuel (92 RON).

Silly me, why did I think they had 95 RON unleaded back in the '50s derp

Still, you should be able to eke a little bit more out of the engine therefore optimizing it a bit further. Otherwise, the engine sounds good

Oh, shit, I thought KW was higher than HP when you converted them, I suppose that’s not bad.

Thanks! I tried the compression method, and the power sightly increased.

60’s car will be posted here when I stop being lazy.

I haven’t really made any cars in 50s but tameness seems a bit low. I’d guess in large part it’s because engine is too powerful for very small car body making whole thing hard to control. Just a guess though. Why don’t you just post car file so we can look through it? Well unless it’s hiding some company super-secrets

I haven’t really made any cars in 50s but tameness seems a bit low. I’d guess in large part it’s because engine is too powerful for very small car body making whole thing hard to control. Just a guess though. Why don’t you just post car file so we can look through it? Well unless it’s hiding some company super-secrets

This is the link:
mega.co.nz/#!v8lX3YRA!43uECOUmkRaOfBhlRY73fRt87i8oUrQ_wfm8gcm9Msw
I’m still lazy, however.
EDIT: Actually, I’ll wait until I get a feedback on the car file.

You can attach these to forum posts, bit quicker and more convenient

. I looked through your car and actually you did pretty good job all things considered. Problem is in 52 you simply can’t get bigger wheels. You’re burning rubber on 2nd gear, 182 HP is just too much for one pair of wheels to cope with. I made 1.4L 60 HP engine to show you difference, I haven’t really changed anything other than gearbox, suspension (I mean car lost about 200 kg of weight) and I think pad type on front brakes. I gotta say though great use of vents as chrome strips, back-end on Runner looks fantastic.
Daiki Runner 1.4 - Rev0.lua (73.9 KB)

LEGACY VERSION CAR, SAME FOR JANEKK’S VERSION.
Thanks for the advice! I think that the car is probably at a good point, so I’ll post the next car.
1958 Daiki Runner L (Forgot the “L” in the file)
imgur.com/a/UKzvx
Daiki Runner - Rev1.lua (83.5 KB)

I’ve increased compression and ignition timing a little bit since there was room to do so pretty much for free, not much of a change though. I also changed gearing which improved acceleration pretty significantly. I made front brakes bit more aggressive since comfort hit wasn’t big and it helped a lot with stopping the car and tameness score, setting them so much towards comfort is something you can do in later years when brakes are a bit better. Tires are now sports compound since it’s nice upgrade that won’t cost much and off-road score wouldn’t be very good anyway. I completely changed suspension, I find picking preset corresponding with what you are going for and then tweaking from there in small steps yields best results, there is always something to gain here, presets aren’t perfect. BTW downforce slider doesn’t do anything unless you have downforce under-tray, in similar fashion aero inclination won’t do anything unless you have lip or wing on the car.

My advice I guess is to tweak stuff and see how it impacts your car in statistics, at some point you’ll know enough about how it all works to go straight for what you want to do. Well that’s how I’m going about it anyway, seems to work so far

. Also pay attention not just to main statistics but also stats under them in Detail Stats screen, there is useful stuff there like for instance wheel spin penalty, if it’s high your tires can’t cope with power you’re sending to them, you may try to get bigger wheels, change gearing or if all else fails maybe reduce power. Actually compare your version with the one (below) I tweaked. Yours get -10.2% penalty on this, mine gets -5,7% and that is with change of tires back to medium compound. What’s up with that? It’s pretty much exact same car with same engine. Difference is in much longer first gear that helps to reduce excessive wheel spin which also helps to improve 0-100 time. Devil as they say is in the details

2015 Daiki Usui… with a major design change from one shown at various motor shows. This is the base model, with a turbocharged model in development.

Equipped with an engine producing around 200 PS which helps the car accelerate to 100 km/h in 5.6 seconds, Daiki Usui is supposed to be an entry sports car for young people alike with decent safety to protect the occupants from death. In addition to standard-level interior and infotainment, this car can be unlocked with RFID key by default. 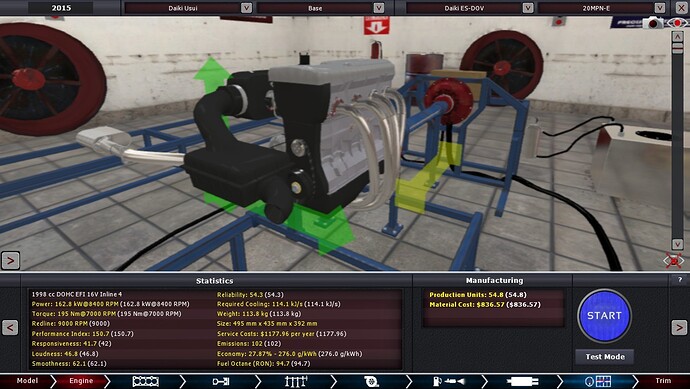 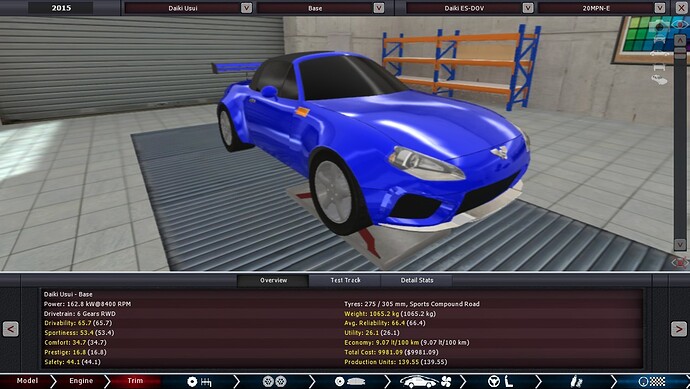 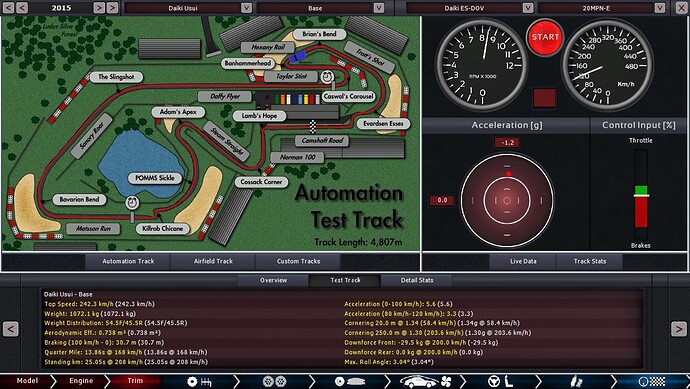 Daiki Acceleration GT is made as a homologation car for Group Automation, with only 200 units of them being produced. While the car did not win many races (and lacked proper differential for sealed roads), it was still rated as one of the most fun-to-drive cars produced in 1984. 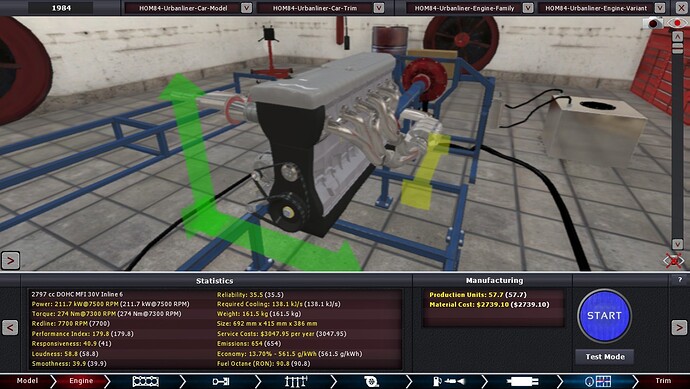 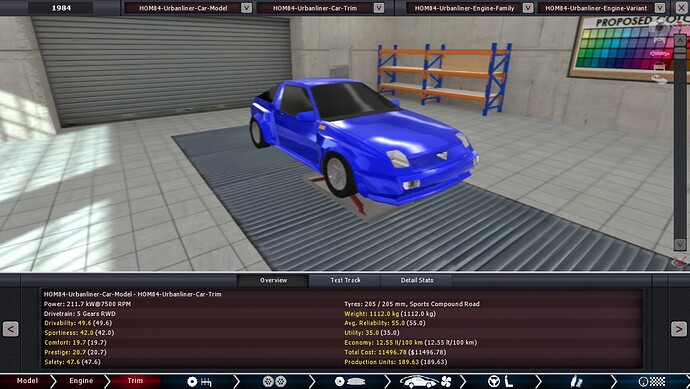 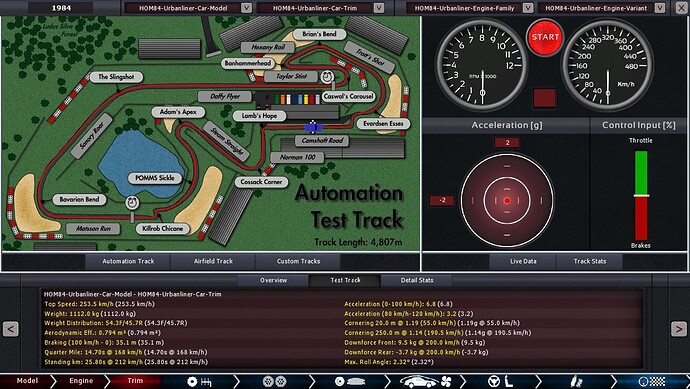 The Wakakusa GT-M was made for people wanting a supercar yet needs to transport their families in comfort. “GT-M” in the name indicates it is a very sporty car for families, supervised by Touma Misaka, the President of Tsuchiura Garage for optimized sportiness and comfort. Combining Tsuchiura’s experience in tuning sports cars with Daiki’s experience in building more sensible cars, a super-minivan equipped with 1000+ PS producing engine capable of accelerating from 0 to 100 km/h in just 3 seconds was made. The car is equipped with luxury interior and infotainment with all assists and advanced safety. Only 5’000 units of this car will be produced. 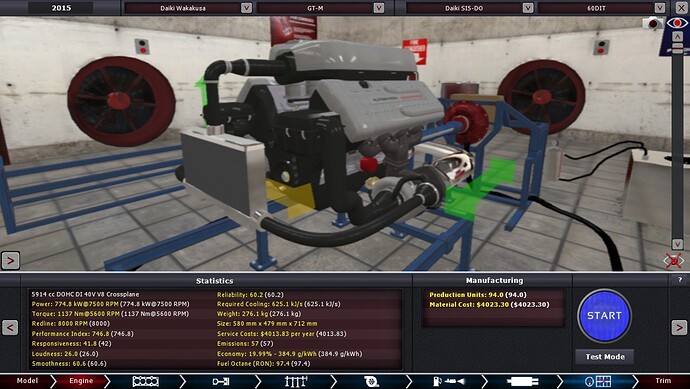 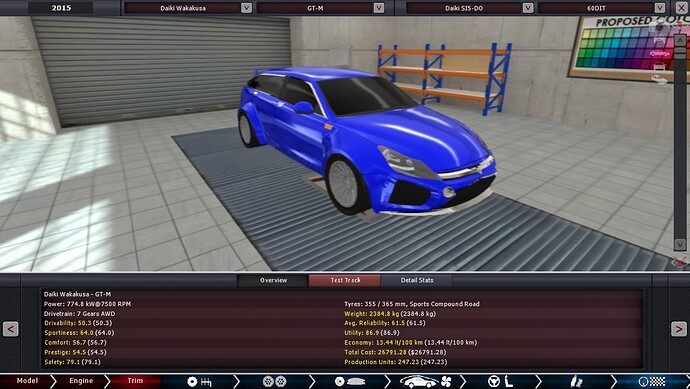 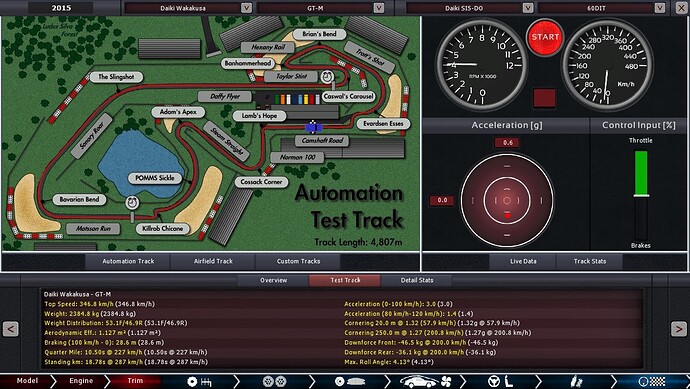