Variation (バリエーション in Katakana) is a Japanese automotive magazine with roots back to the early 1980s. Founded by Daisuke Arai in 1981, the magazine was initially founded to meet the needs of the Japanese tuning scene and the enthusiasts behind them.

Initially, Variation started out as a magazine that covered the early exploits of the Japanese underground illegal tuning and street racing scene, but later evolved to include legally hosted Speed Trials, Car Reviews, and other such extras. 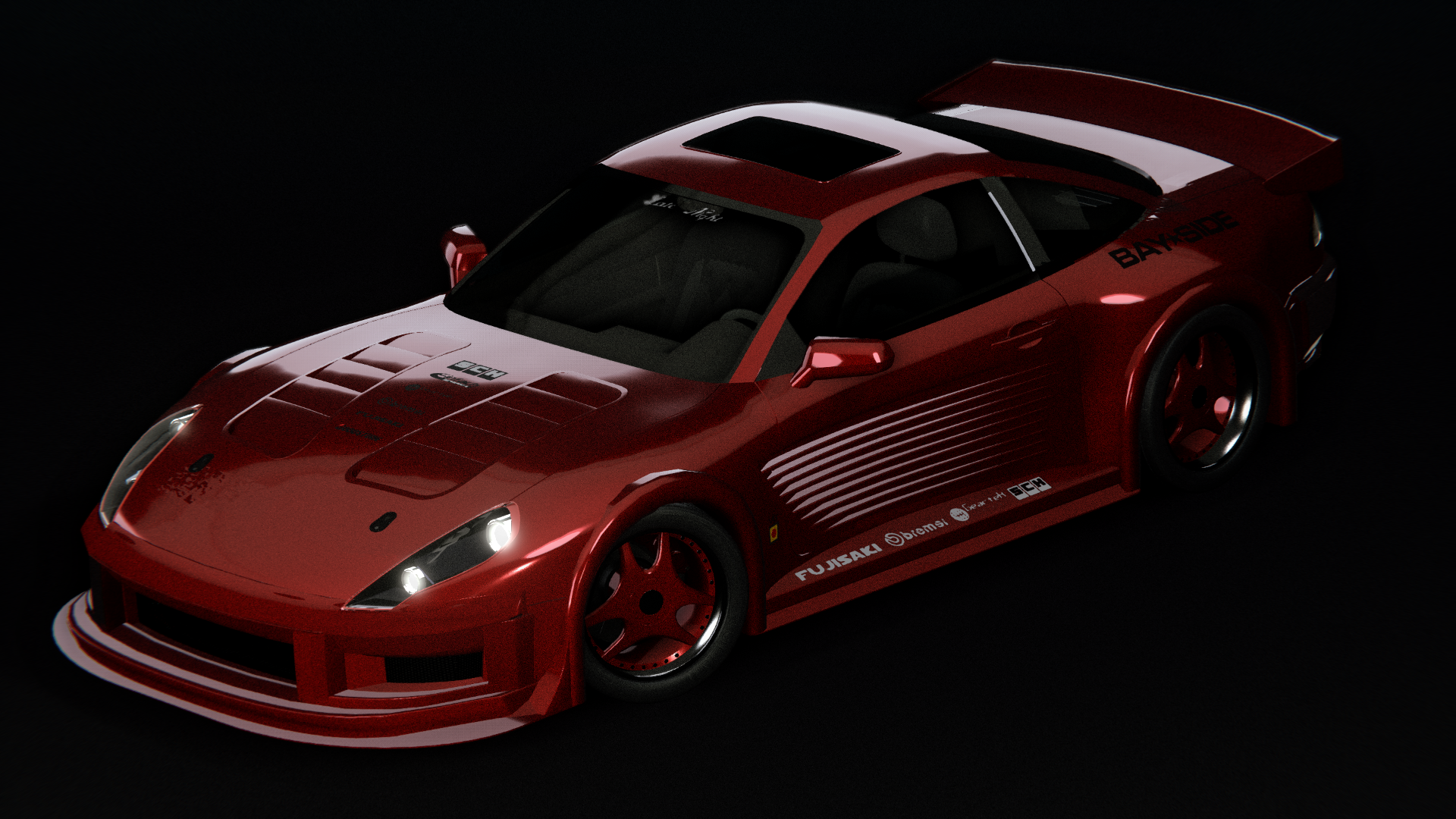 Of course, you’ve heard of the Sendo GT, among Japan’s top-spec GT cars of the current era, already a very powerful car on its own, but it’s already getting old. The GT was first released back in 1994 with sleek styling for the era and great power and handling. GT is almost 10 years old by now, and even with its newer facelifts, the car is in need of an update, and with how Sendo is trying to seemingly be all secretive and whatnot, we may never know if they actually will make a successor to it. But alas, one of Japan’s local tuning shops has come to the rescue, with something we never really expected. At this year’s Auto Salon, of course it had to be Bayside who would do the work. As such, here we have it.

“The car industry right now is not doing so well…” Stated Ms. Yuuki Cloudy Nagato of Bayside. “Everyone seems all fed up with their focuses on trying to appeal to mass markets, they’ve basically gone and forgotten the enthusiasts sector. So guess what? We had to do our own work here.”
An impressive piece of engineering this Sendo, apparently powered by the 4.5 liter V8 from the international V8 version of the GT. Ms. Cloudy does not want to tell us how much power it makes just yet, but she does say that it’s “higher than we think it is”. Something tells us it isn’t one million though.

But that engine is not the first thing to be polarized about with this car. Grazing this car’s lines is Bayside’s new Skunks Work Aerokit, with a lengthened nose and wide sideskirts and fenders. Also fitted on are 18-inch tri-spoke Arunahart wheels on Fujisaki Fotenza rubber, they’re staggered in width so something tells us that this will be used yet again for another top speed attack. Holding those wheels are a set of Bremsi 370mm brakes with six calipers up front, and four calipers in the rear, Einfach shocks with a special custom Bayside-made damper system hold those combination to the chassis, which looks to have extra bracing attached to it below.

“What we plan to do with this car next, is a secret for now. Though I think it should be obvious by now what we have in mind. We’ll still focus on trying to extract as much potential as we can from the V8 without it going apart. I’ve heard from foreign owners in America that these V8 engines aren’t exactly the best when it comes to this stuff, but we’re not sure either if they’re the ones who aren’t doing the best.”

Luckily for them though, the tuning potential for the V8 seems to be fairly broad, with lots of parts available for them to repurpose or take note of if ever they do plan on sticking with the engine type. Ms. Cloudy seems confident that the goals she and the rest of the Bayside team are planning are achievable.

Not bad for a start! Keep up the good work. 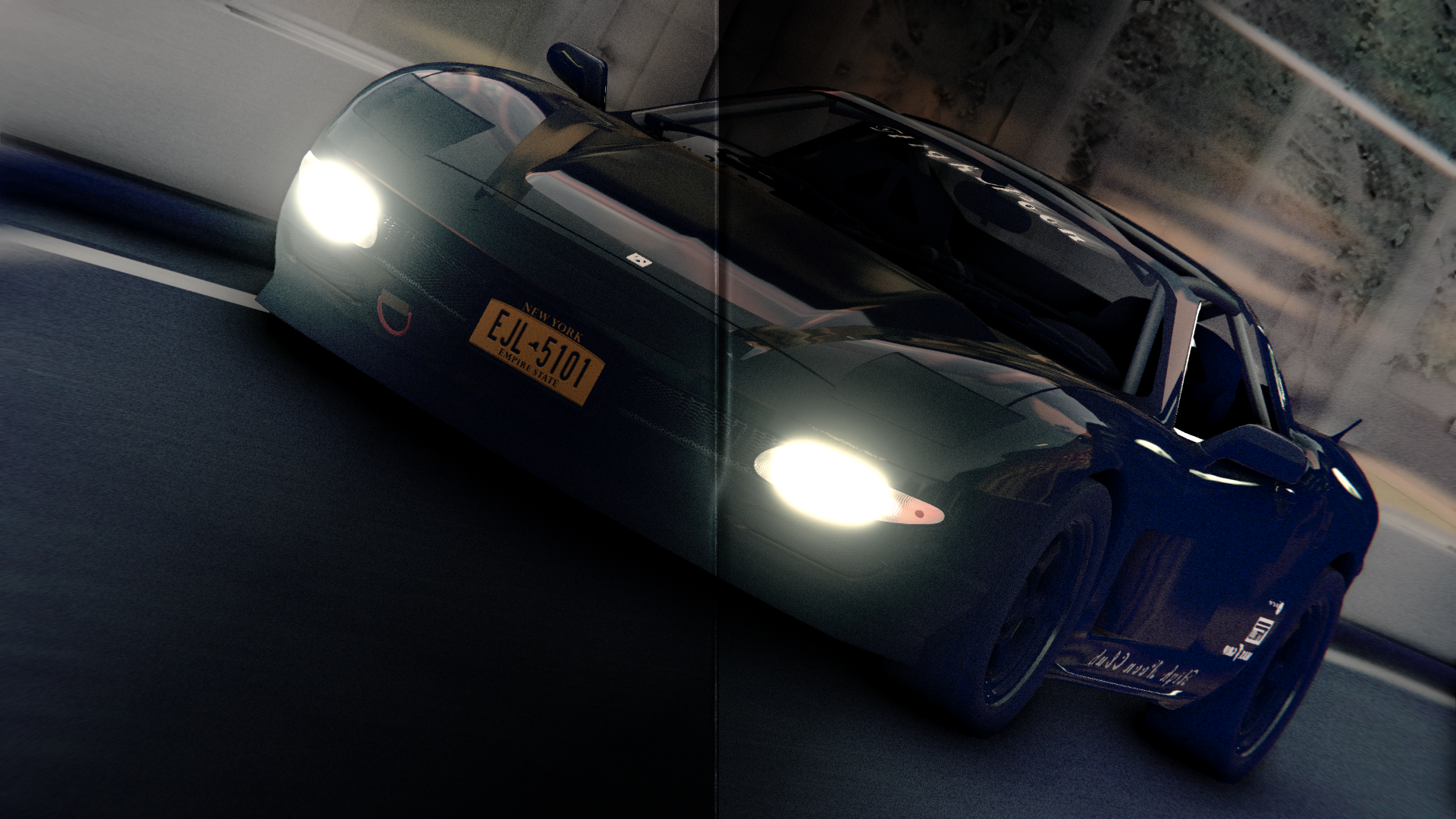 Today, seemingly out of pure coincidence, I had managed to run into one of the few more notorious street running groups on the Bayshore route as of now. Of course, no one could mistake this ghostly presence of a car, it was none other than the High Noon Club’s so-called “Jorogumo”, the famed Arachne that tears up the loop with the wake of its fellow club members going aside it.

It was at least an hour before midnight, unfortunately a meeting had ran over time and I was left having to go home at this late of a time. Though the word “unfortunately” probably doesn’t make sense to the reader if you are still an aspiring boy. Either way, I had somehow caught in the corner of my eye a little group meeting along a stop near the expressway, upon closer inspection I had deducted it was indeed the High Noon Club.

As mysterious as they were, Variation have met them on multiple occasions at the Yatabe Testings Course. They were a competitive bunch but were still a very accommodating team, and their behaviour certainly carried onto the highways and into this short gathering before they performed their high-speed encounters. Of course, their cars were no short of legendary, but the one that mainly caught my eye was the co-founder’s new car.

Readers of Variation have sent us letters about this new car, occasionally giving it the nickname of the Jorogumo for the car’s nameplate at the back of it. The co-founder’s new car was the Denver Arachne, one of the American-made sports car with apparent European heritage stylings. Encounters with it have noted it’s apparent snarl from the large 6.2 liter engine, a V8. Most of what everyone had claimed were apparent in-person, with the exception of it’s high speed… Although that seems to be because I was only seeing the car parked, but that would change later though as I followed them when they went for their runs.

Before that, I had a chat with the co-founder, of course who else could it be other than Mr. Black Terror? (Mr. B is what we shall call him from here on.) Mr. B gave me a quick run down on what the car had, but he did not say much beyond the car’s original specification. Mr. B had told me that one of his latest runs he had run over 310 km/h, though was forced to abort the run after supposedly losing boost pressure. He still seems to be working on the car, and that is apparent as unlike his previous car, and other High Noon Clubs members cars, it is not exactly very complete looking, and I doubt Mr. B has lost all of his fundings towards the car.
With that quick chat over though, they eventually got onto their planned drive.

Of course, I was driving my regular car today, so I wouldn’t have exactly managed to keep up with them, but even from the distance as they pulled away, especially that “Jorogumo”, the feeling within that the club gave was still unbelievable.

Well, I feel that you have captured the feeling of an underground car magazine very well this far, and I like it. Keep on writing.

Your first story for Variation reminds me of the Top Secret Toyota Supra developed and built by “Smokey” Nagata - I suspect you used him as inspiration for Ms. Cloudy Nagato, and both cars received engine swaps during the tuning process. As for the High Noon Club, I think it was inspired by the real-life Midnight Club, for which the video game series was named.

And regarding that Sendo: It’s a successor to the '88 model that left me in awe back in CSR 129 v2, and I have to say that even in base form it looks every bit as stunning as its boxy predecessor, but Bayside have turned its visual appeal up to 11. Well done!

As for the tuned Arachne… It’s the first time I’ve seen that generation of Arachne anywhere, but the tuned variant shown is simply phenomenal, especially considering that it’s no slouch even in stock form.

so uhhhhh update on this:

i’ll re-continue this magazine when LCV4.2 finally comes out (aka turbo revamp among other things), so this magazine isn’t dead yet. to those who submitted a car, thank you! (unfortunately might not get a review since i’m really unmotivated to do anything Automation-wise until the latest update comes out, hope y’all can understand.)

TLDR: too unmotivated to continue for now, wait till next big game update for the magazine to continue