I haven’t been super active on the forums as of late… been lurking a bit. Still, I haven’t seen this topic pop up…

Being able to adjust the roof line of the pre rendered models could make for a vast improvement in the number of variations conceivable for each model. I know it’s probably too late to script this in, but it’s something that has bugged me about the vehicle creator from the beginning.

It would also improve the players ability to keep the proportions of the car less awkward when choosing to lengthen/shorten the hood/trunk area.

Which brings me to the suggestion of variable wheel bases within the same model of pre rendered body… essentially scaling the car to the wheelbase.

I think both of these are excellent ideas, within reason. I do not want a car 3 meters tall and 5 meters wide. Am I right. It is also probably illegal.

First off, use the search function. This has been discussed numerous of times. First look around before suggesting.

Secondly, giving you so much free forming for your car comes at a price. There are certain restrictions to it, or else it would break the game. Sure roof height could be editted, that wouldnt be a problem (has been discussed a couple of times) But other parts might become an issue, as it could cause hole to appear in your car, where you wouldnt want them. Also the models use various ‘average’, basic, generic wheelbase models made with looking at many different groups out of many different cars. So for all 2000-2005 sedans, they looked at Audi, BMW, Mercedes, Mitsubishi, Toyota etc. etc. and took an average wheelbase out of that.

But, the complete cardesigner is being relooked at. This story is only the way it currently is and been discussed. Im not sure on what the new thing is going to look like. All I think they are going to do is the way you build your cars and easily can make new models without losing too much time completely redesigning the car and such.

Stamping in custom windows has also been discussed

I like these ideas, especially the one for changing the wheelbase.

Also I’d like to see more variation in the body molding. Like for example most of the cars you can only extend or shrink the rear end, but no adjustment for angle of the rear end. Think 60’s/70’s Alfa Romeo GTV, I want to be able to turn a regular square-ish back to something more angled and interesting…

The other thing I’d like to see is the ability to pull the A pillars back, but leave the windshield so that it creates a more curved windshield. This might be a bit difficult, but it gives more options to making more unique looking vehicles.

Small improvements like this to the body designer would greatly increase the variety of possible designs out of a single body.

THe A B and C pillars modification should be possible with the current bodyeditor, if im right. Dividing into more areas, but with smaller modifications, would be a good idea.
Maybe Daffy can look into this when he has time?

Daffy: On GUI matter, you could show the areas that are editable with a white area as they are now and turn them on and off with a selectionbox somewhere. When hovering over an area, let it glow up a bit, and when selected and dragging, make it turn into a different color. This way you can show players where the editable areas are, plus when they are adjusting them. Also this way, you can add more smaller, editable areas that give extra modification possibilities. We are not talking about 20 extra spots, but maybe 4 or 5 new ones, or current ones cut into 2 smaller sections.

As for the wheelbase, read my first post (3rd from the top). Its near to impossible to get the wheelbases changed, and then let the body adjust to it/make it fit.

It would be extremely difficult to code this in as it would most likely cause the bodies to glitch out and break the game with the way the bodies are currently modelled and morphed. If the devs could somehow make it work however, it could be a valuable addition.

I looked in the body section of the assets of the game, and I did indeed manage to change the wheelbase. However, it obviously doesn’t change the wheelbase of the body. It would be easier for the devs to just stick to how they seem to plan to do it: adding bodies into subfamilies into families.

As I always say, the car deformation is pretty much as complex/powerful as it’s possible to make it with the current way we’re doing it, and any improved way would require a lot more time and effort that we can’t afford to spend when we have the rest of the game to finish.

I try and give as much control as possible over deforming each car, but giving too many deformation controls on one car usually causes things to go horribly wrong and create odd kinks and folds in the body work. It’s hard enough to even get it working as well as it does.

Well that you WILL get

Well that you WILL get

Well, here is a sneak preview of the next body 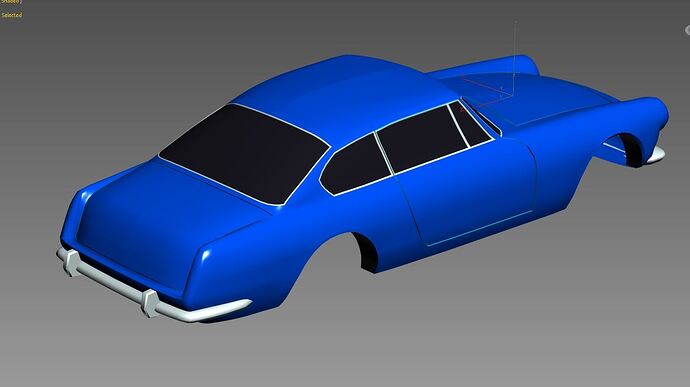