Also known as LVAP, an automobile plant in Las Vegas.

Located northeast of Las Vegas, 18 miles from its center, on the Las Vegas Fwy, near the ring racing and dirt track. 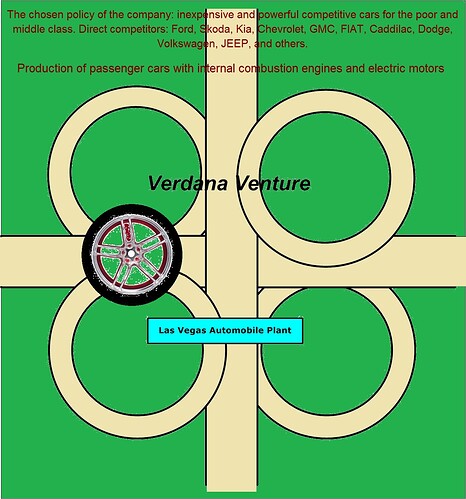 The main strategy is made on the preferred body types: Universal, Hatchback, Sedan, Coupe, SUV.

The first factory designed car is the Verdana T1052.
Features of Automation The Car Company Tycoon Game were taken into consideration.
Transport design will be done in a modern style, but could easily change from the preferences of the audience. Mostly it will be rounded shapes, without a hint of cubism.
Although of course the company could release a cubic car if necessary.
From the game, I expecting a greater variety of customization so that you can get even more options.
Statutory capital: $1,000,000.
Loans of $10,000,000 were taken out to promote the business.
Was also formed Research and Development office, to monitor the quality of the output of the target. 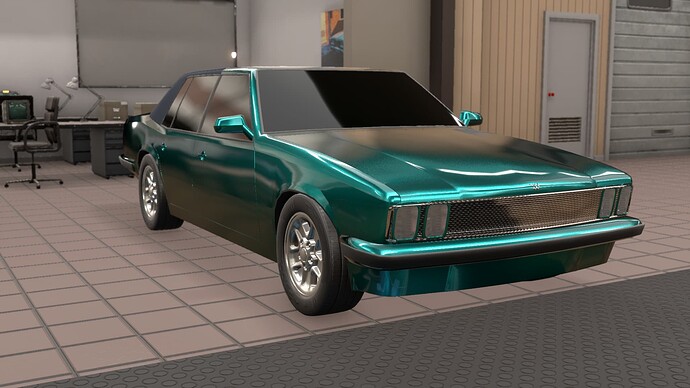 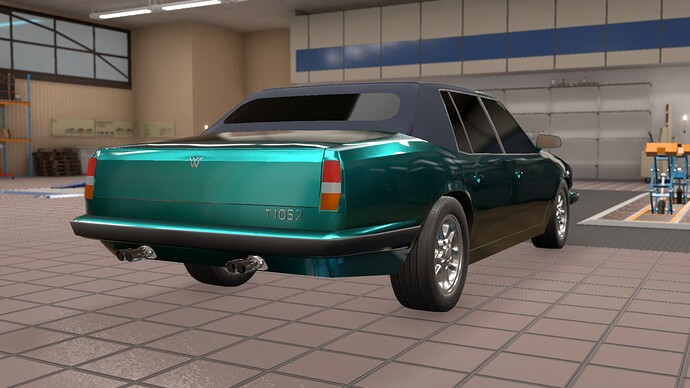 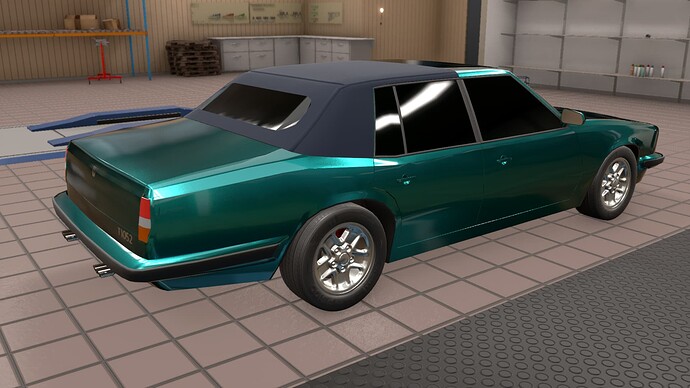 VV Thrust Shift Metal Block.
This car was developed as a concept, and it will not be distributed on markets. 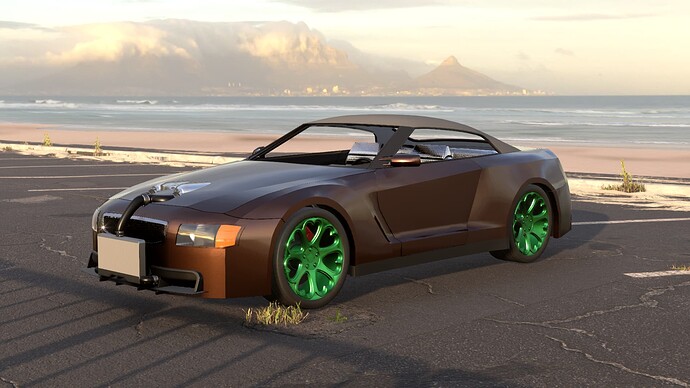 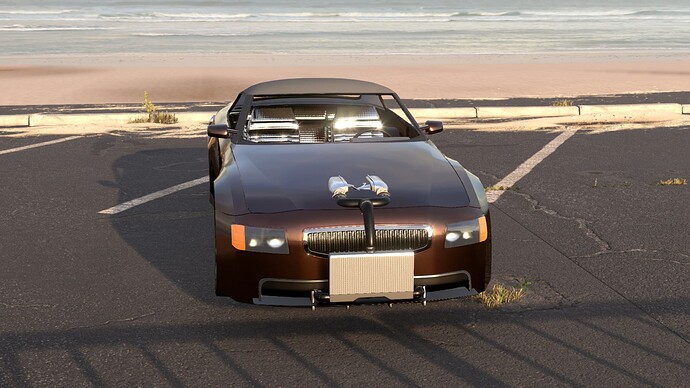 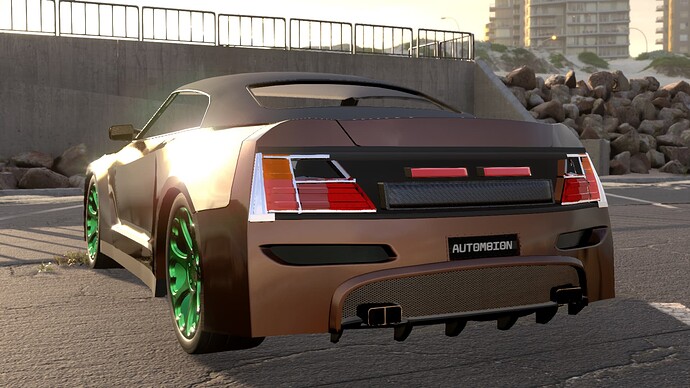 I wanted to create something like the Dodge Charger R/T.
Model shapes that many people would have liked. But if you look at it more closely, it becomes clear that the 1970s hardtop is a bit old and long, and it could well be improved for the modern look, and include the ESC and TC safety systems that it lacked. 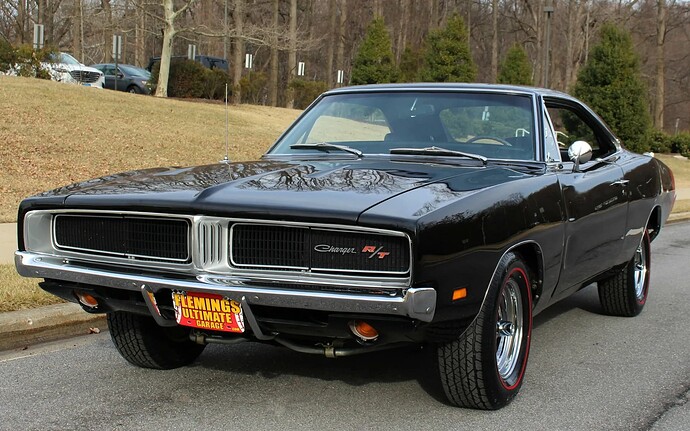 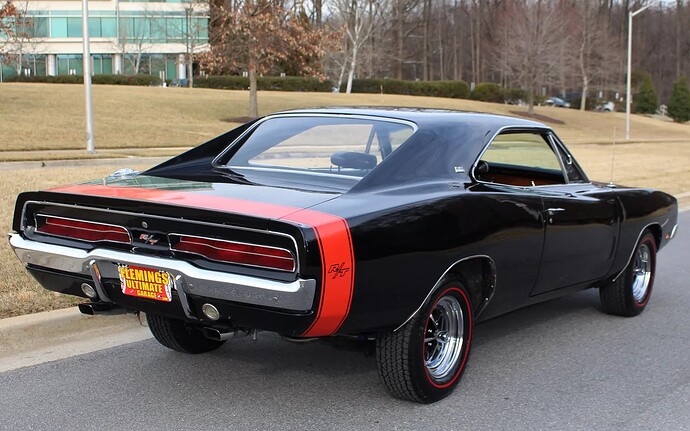 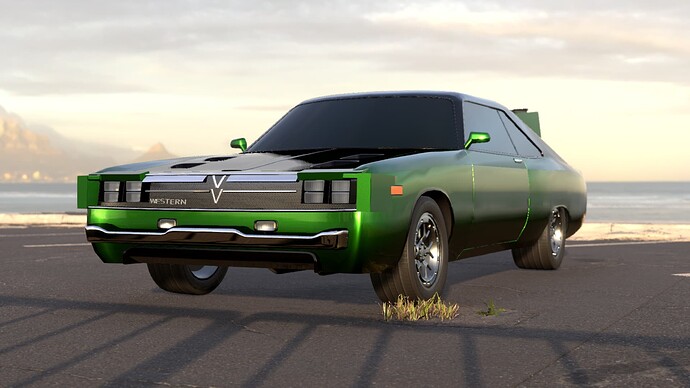 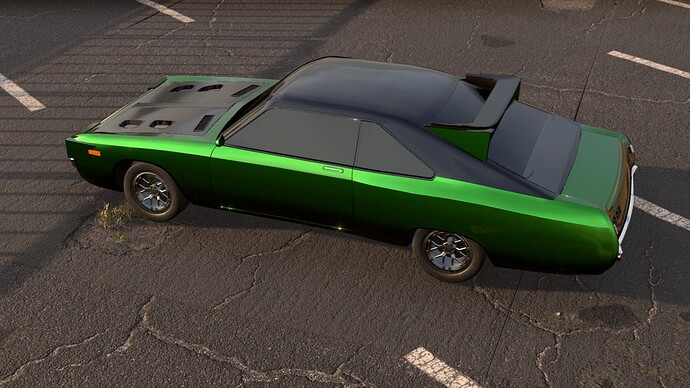 What about the .car file for it? I want to take a closer look.

OK, I am going to give this some constructive criticism now, some good and some bad.

I really like the clean side profile of it, combined with the black roof and tinted windows, that gives it a smooth and sleek, concept car like look.

The wing above the rear window looks really out of place. No muscle car as far as I know had such a placement of it, some of them had wings on the trunk and a wing there would look more suited to the car if it should have one. This looks like something from a group B car, itself an interesting era in automotive history but has nothing to do with muscle cars.

The mirrors are so small that they would be virtually useless.

I get the idea with metal bumpers since cars in the 60s had them, however, if this is supposed to be a modern, retro styled car I would ditch them. I don’t even know if you can cope with todays pedestrian safety regulations with them. Having them in the same black as the roof would be a more modern looking contrast. Also, there is too much of a gap between the front bumper and grille. I would have raised the bumper, and also, I would have widened the fog lights or what they are to fit inside the space in the bumper.

The headlights are completely off, they look like if they are straight from the 80s, and does not belong on a modern car inspired by the 60s IMO.

What kind of strange square flaps is it at the corners of the front fenders? Does not look like they belong there at all, what is the idea behind them.

The hood vents look a bit too much like potholes, strange shape and too deep, I would have experimented a bit more with finding something suitable.

Maybe a tad bigger wheels would have made it look more like what it’s intended to be and less like something someone would have slapped on a muscle car back in 2003 because of the fads of the time. But yet, even if the design does not scream “classic muscle” I actually like them and think that they fits well into the design.

Do you have any pictures from behind?

I may sound harsh now but it actually feels like you’re onto something with this design so I just gave you some things to think about for improving even more. In fact, I like the overall look of this car but I feel that some improvement in details would make it much better.

I really didn’t know that such a good car was so easily available! Nevertheless, the era of the maslkar is over, replaced by bricks with rounded corners. They no longer have anything from the 50’s and nothing from the 80’s, in general modern cars have lost all the beauty of the forms. I designed the car to make it enjoyable aesthetically, so the shape of the body is an important part.
The engine I made similar to Dodge, but it was so good that it will probably find use in other designs. 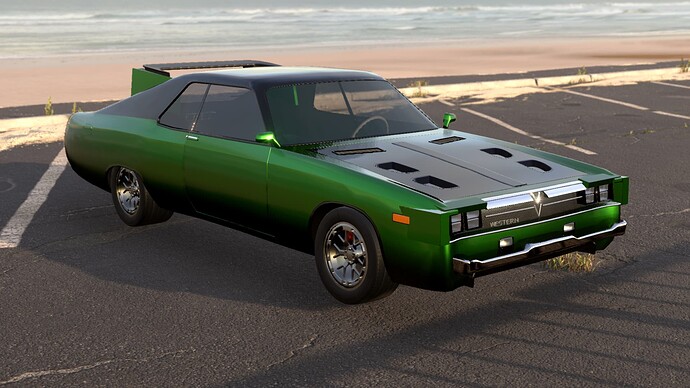 Photo611920×1080 181 KB
I agree, some kind of lost among the eras car turned out.
It really won’t pass the pedestrian safety test, and also the mirrors are somehow left too small. About the anti-wing, I thought so, it would be a controversial solution. To strange fender flaps I came up with myself, while drawing in PAINT, I thought it would be pretty cool, although of course, in the city, it makes parking a lot harder. Their purpose is decorative and also the wider grill helps to cool the brakes, that is, there are special air ducts. 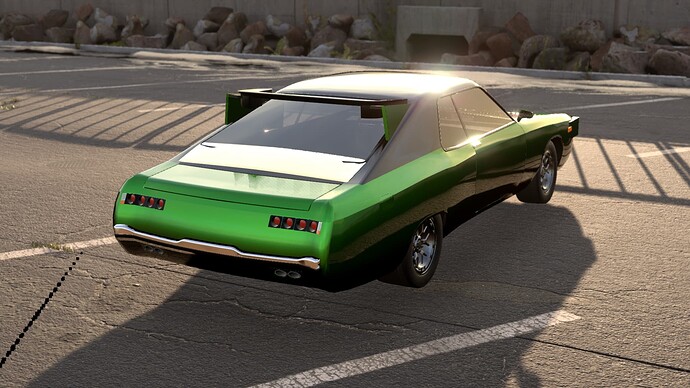 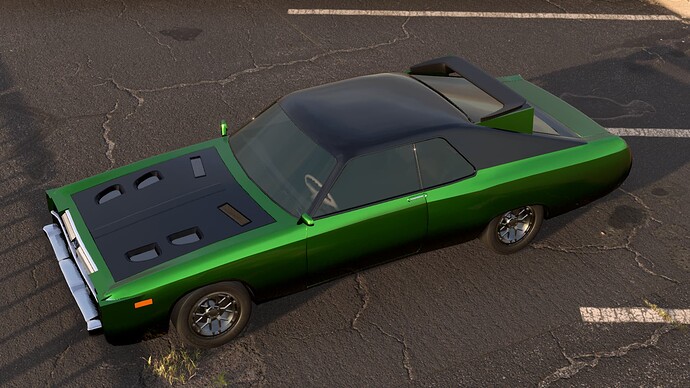 An elite car at an affordable price, the Silver Broncle cost only $54,000.

The body was taken from a Land Rover. According to the company’s idea, it was supposed to outdo the famous Mercedes Benc AMG Gelendwagen, which costs $300,000.

Apparently, it did not reach its beauty, but nevertheless, it was still a good car.

Very large interior space, where you can stack anything.

The entire body is covered with a layer of carbon fiber, which was put on top of the steel with rivets. 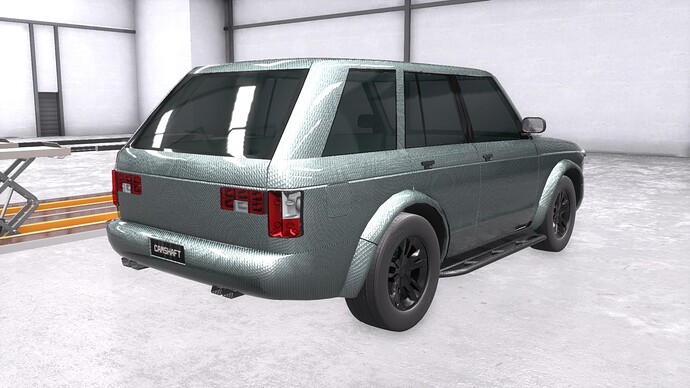 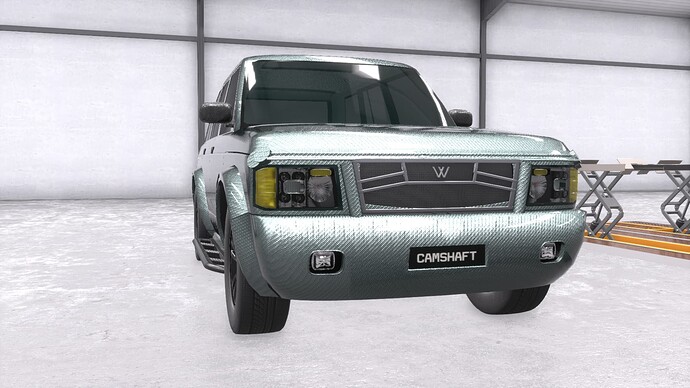 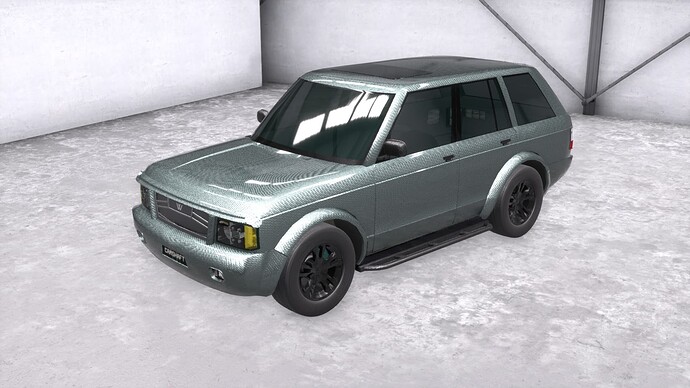 The 2004 Lumic, which participated in the Challenge EABL Elenir's Automation/Beamng challenge series/ 3# The non-official official automation Gacha! (Tracks announced/Entries still open!).
The car from the past, which all the same decided to embody in the present, despite some anachronisms and archaic technologies.
In general, this is how LVAP Verdana Venture Lumic would look like if the company was formed in the 1990s. 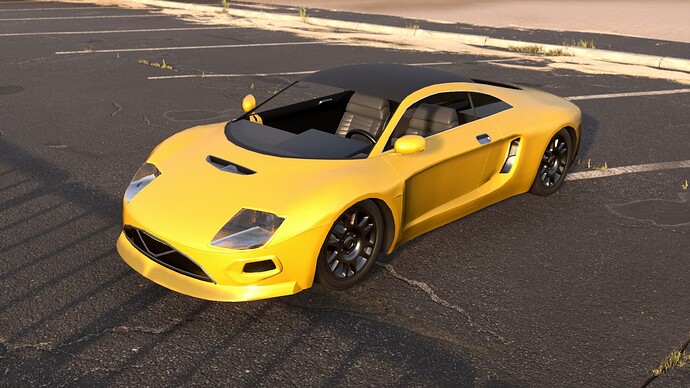 Certainly, it is not so good in comparison with the modern vision on sports cars, but nevertheless, it has turned out very satisfactory to the owner.
Not too bad for a city, not too magnificent on a track, it gives a pleasant sensation of tension to a driver, when he understands that wrong driving can lead to tragic consequences. 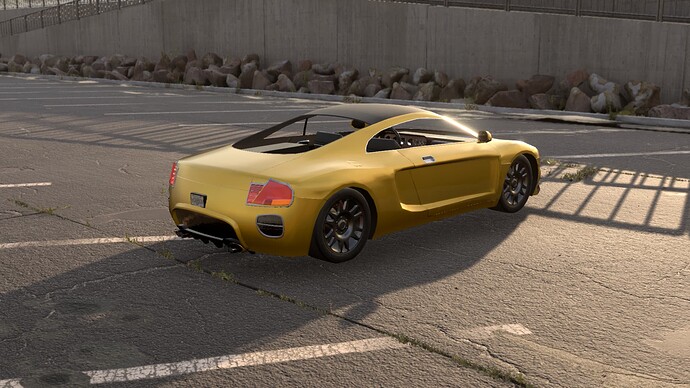 Therefore, along with the purchase of the car, the buyer receives a free season ticket to one of several tracks in the United States, where he can feel, get used to driving, become a hypercar pilot without significant risk to life.
Because the Lumic was built according to the vision of sports cars of the 2000s, and back then there was much less automation controlling human life processes, and there was still a great role for the driver, who had to control everything himself. It was still a total freedom from gadgets, so they did not have a negative impact on society. Nowadays the total accountability to everyone is well known, when you are afraid to do anything unnecessary, because with the help of Internet you quickly become the talk of the town, and the important details about your personality, which should be kept in secret, are revealed. No wonder that now, in this day and age, any explosive news spreads quickly across the planet, editing society itself and forcing it to change.
And then, in this great free era of the 2000’s and was built hypercar Lumic.
It was able to compete well with the famous at that time:
the Mercedes C297
Lamborghini Murcelago
Ferrari 360 Modena
Volkswagen W12, which remained a concept car, making way for Bentley, Lamborghini and Bugatti.
In general, this very radically different from the Volkswagen brand’s automotive images, the conservative Germans decided to keep it in their factory. Volkswagen W12 was a great success, a very good quality product for the people, which they decided to sacrifice for the sake of competitors of other firms, which in the late 90’s became part of the Volkswagen concern.
Jaguar XJ220.
What is remarkable in Lumic:
For engineers, the following facts might seem interesting:
Despite the great weight of [1762/3884] kg/lb, it accelerates fairly quickly, taking 3.7 seconds to [100/62].
In 2000, they already understood the need to seriously modify the car for the profiles and disciplines in which the car should be in, and therefore did not neglect to install reasonably thick rear wheels to reduce the harmful effects of oversteer, no wonder the Lumic is about [290 mm/12 inches].
The rear tires can wear out quickly when used extensively, and for too powerful a motor and rear-wheel drive.
The car is easy to drift, and requires very careful driving and adequate professional knowledge of rear-wheel drive cars from the pilot.
ABS fulfills its function on fire and lets you relax a bit.
Because of its big disposition the car can’t participate in such difficult courses, as Nuerburgring Nordshleife Full, at least the pilot can’t feel such great overload in a form of stress and monstrous concentration. 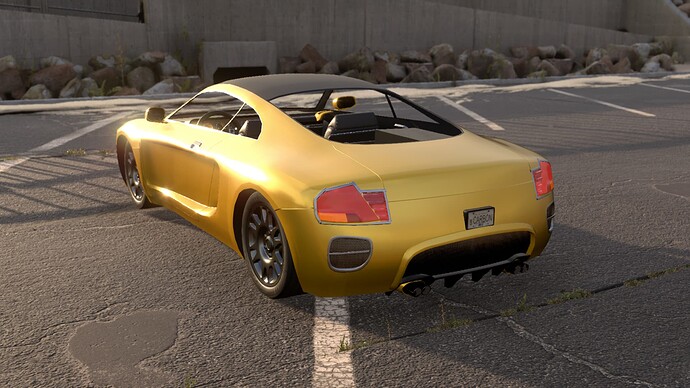 No, that’s not what the Lumic is built for. It can certainly overpower a GP Streke, but mostly it was created to bring joy to the owner, whether it’s a track or city streets.
It is, of course, quite expensive for the average person - about $110,000, but it is interesting to watch the movements and life of this car just for TV, which used to be quite common in the 2000s, when cars could be easily reached by an average person, so that some model became a dream. When it was very interesting to compare sportscars to each other, because they weren’t too far off from series production cars. It was the era of sharp differences and sluggish potential, and therefore such a car immediately gained superiority over the rest, with its engine under 500 horsepower, which in our time is not a gimmick, but also very expensive, from - the new market conditions and society, and put such a motor will be quite ordinary pickup, which does not pull under the rules of sportivness.
In general, they have tried to make cars more accessible and mass, and car culture has changed. Now the supercar must meet higher requirements, accordingly, the cost of materials rises greatly, and again these hypercars become unaffordable for the average population.
Car project - available for change.
Lymic_art_2004_-_Lymic_art_2004.car (44.7 KB)