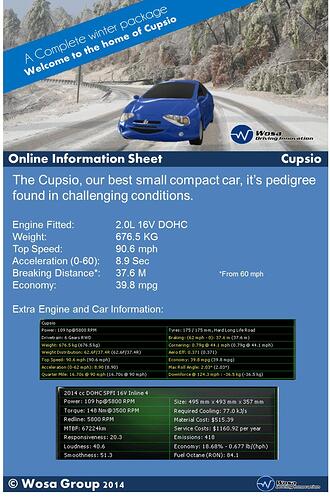 Sorry, but… Please revise this engine. I didn’t even know that it’s possible to get such low hp from a 2 litre. The MTBF is bad, so is fuel economy, responsiveness and especially emissions for 2014. You can do much better than that

Just put a little effort into it.

Yes it is rather bad, first starts though!

I’ll re-do it soon, following the guides that have been put together. Not really german engineering at the moment.

Well, I look at the MTBF, and I can believe the “breaking distance” is 37 meters.

Sorry, but… Please revise this engine. I didn’t even know that it’s possible to get such low hp from a 2 litre. The MTBF is bad, so is fuel economy, responsiveness and especially emissions for 2014. You can do much better than that

Just put a little effort into it.

I believe the issue is that it’s 94.5 RON but running on standard unleaded.
If you change it to premium unleaded or turn down the compression ratio until its current RON is less than 91 I think you’ll find vast improvements! =)

Thanks for the tip, I’ll give it a try!

Much better, apart from responsiveness

Keep on tuning the motor, that was a good first improvement but you should be able to get about 130-140hp on regular gas out of a 2.0 without sacrificing much life or costs.

What setting do you have for the cam? And comp ratio? I see that the engine only require 77 kJ/s, have never seen that low number from that size engine.

I’ve uploaded the engine file (since been deleted) if you want to have a go at tweaking it, otherwise I’ll start from scratch following the Engine Designer guide

I’m on mobile right now and can’t edit but try switching to mpfi should improve everything, if you want to keep the costs down still go to single over head cam 16 valve. 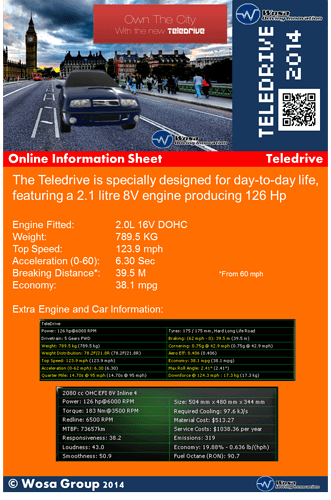 I’m getting ready for work so I don’t have a lot of time but I have made two tunes for you:

In both of them I made your fuel/air mix a lot richer which allowed me to significantly increase compression ratio and get a lot more power and an improved efficiency.
I also increased your rev limit as you were topping out before peak power was achieved.
Wosa exeRev0.lua (44.5 KB)
Wosa cheapRev0.lua (41.8 KB)

Engines aside, I like your ad idea with the slogans and back ground approach. Keep them coming.

Here are the Centauri Industries takes on your engine. First is a quick to make, very reliable, low power but torquey version, with over 25% economy, file name “cheap”. Next a all around version basically a optimized tune of your engine with comparable cost and hours with about 130 hp and over 21% economy, file name “average”. And finally a full out sport version with 200hp and still over 20% economy, file name “high end”. All models have 40k or more mile MTBF, under $550 material costs, and run on regular gas.
2.0L 8V cheapRev0.lua (39 KB)
2.0L 16V High endRev0.lua (49.6 KB)
2.0L 16V AverageRev0.lua (41.4 KB)

Okay, I did several tunes for you.

First thing I noticed was the drop in MTBF as I tried to bump up the rev limit. Small-displacement engines like to rev to make their power, and I noticed your engine design was slightly oversquare. This means that the stroke is longer than the bore is wide. Ideally, you’d like a square (both are equal) or undersquare (shorter stroke than bore). To a point, these reduce the strain on rods, allowing higher revs without harming reliability. The rest was tune optimizations. You want to have your redline slightly above peak power. If you have to shift right as the engine peaks, you basically have to “start over” building power in the next gear. Peak numbers don’t count nearly as much as power under the curve. You want a long, flat torque curve. I bumped compression and made a few other changes. Files attached are in ascending order of aggressiveness. Also keep in mind these tunes are progressive, with each building on the previous, except noted changes. Also note that despite the revised bore/stroke, the engine still displaces the original 2014 cc.

This third tune uses forged rods and pistons, spinning to 8200 RPM. A long tube header was added, ITB’s, compression increased, cams and ignition revised. This is a much sportier package and is costlier in both manhours and materials for production. With a pretty stout hit to economy (low 20’s) the same could be done for less, or by bumping the octane requirement, significantly less while retaining decent economy.
218 HP@7900 RPM / 155 lb-ft@6800
43k+ MTBF, 30.41% econ
52.5 man hours, $991 materials

Finally, to showcase what is possible by simply enriching the fuel mixture, I took the above and fattened the mix to the limit of running well. The rest of the mods are simply to support the power made by this. A racing header, revised cams, increased compression, and reworked exhaust come together in a heavy-hitting daily-drivable guise. It still runs on regular.
300 HP@8200 / 198 lb-ft@7500
29k MTBF, 19.84% econ
60.3 man hours, $1056 materials

I hope looking through these tunes and the revisions will help you gain a little insight into where you’re having difficulty. If you have any questions at all or want me to demo anything else for you, just let me know either here or through PM. I’ll do my best to respond as promptly as possible.