I had great fun with this challenge, making more or less literal shitboxes from previously unexplored era.
So many cute cars in this thread <3

It even has cool window sticker

I’m actually going through one of those times when I can’t sit on photoshop to design a legit poster. So here’s the car. The 1969 Gerade SP120 Oliver

Made in Finland, for finns. The 1966 Koskinen Kova is a simple yet effective way of getting you and your family home, no matter the conditions. With it's sturdy 2.7 liter powerplant, the Kova will do 0-60 in a nippy 13 seconds, and will accelerate all the way to 100 miles per hour, all for the low price of $13000.

The deadline is in 24 hours!

One of Boulder’s earlier steps out of its commercial truck niche and into the broader passenger car market.

1966 AAU JY73 sold internationally as the M2266 GS via the Anikatia International Vehicle Export Corporation better known as Chalyang Export. It is was a forward control passenger and cargo van and it was powered by the M2112N-K1B GS– a 2.1-liter 4-cylinder petrol engine that made 78hp.

crappy article by me (not that anybody asked)

Bit late, but entries are closed!

Jukka is sitting in the kitchen drinking coffee. He bought some car magazines yesterday, and decides to look at them in case there is any interesting car he might want to buy. He takes a magazine and flips it open.

Hmm, the design is not good at all in my opinion. The car is also quite large, and i really just want a small car. The 19.6 MPG rating isn’t that great either. It is still quite cheap but i think this car is not for me.

This car at least looks nice. The fuel usage is not the best but it isn’t that bad. The interior is a bit confusing, it has really expensive - looking seats and dashboard, but that radio looks like something i would find in my Moskvich. I think im gonna pass on this one.

Not a contender in finals, Premium/Basic minmax

This car looks nice, but the release of this car is going to be delayed because of some engine production problems. I need a new car as soon as possible so this car is out of question for me.

Not a contender in finals, too much engine ET 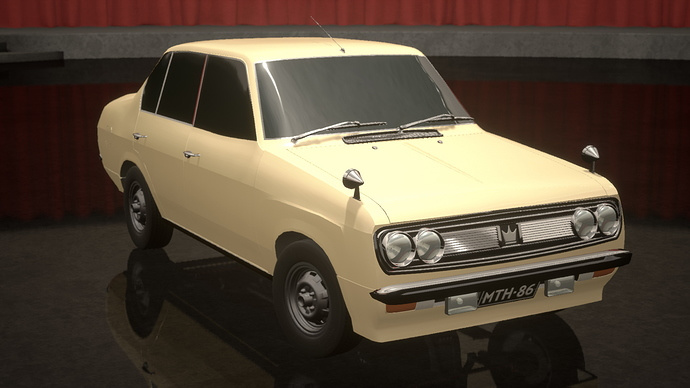 Hmm, the design is a bit bland but it has really good specs. The 23.5 MPG rating is great, and the safety and reliability ratings are good as well. It seems to have some kind of rustproofing in it too. I might try this out later.

Oh god, the design is terrifying, and the stats aren’t great either. Wait, does this car even have door handles? i can’t see any at least. This car is definetly not for me.

Wow, i really like the design of this car. The stats aren’t the best though, 22.7 MPG rating is good, but the safety and reliability ratings aren’t that great. Its not really that expensive though, so i might take a look.

A contender in the finals

This thing looks nice, but seems to suffer from some production issues, so i guess this might not be the car for me.

Not a contender in finals, too much trim PU

This thing also has this weird fancy interior - crappy radio thing going on. The fuel efficiency in this thing is great, but the relaibility isn’t great and service costs are a bit higher than in the other cars. I think this car is not what i am looking for.

Well, this car looks nice, but the fuel consumption isn’t that great compared to other cars. The reliability and safety also aren’t the best, but the car is cheap, and has low service costs. There is still many cars left to look at, so maybe i will try to find something better.

This car is really beautiful, and the price isn’t bad either. The fuel economy is great, but the RR config makes the car quite terrifying to drive, and the service costs are quite high as well. I might pass on this one, because i need a car thats easy to drive.

G160 K by Giusseppe by @undercoverhardwarema

Well this thing isn’t really attractive, and the fuel economy is quite bad as well. The handling isn’t great but it is cheap and service costs are acceptable, but im not really looking for a van anyway so i won’t consider this car.

Another van? Well, this thing actually looks like a nice car. The handling is not great in this van either, and the reliability is lower. The fuel consumption is a bit better but im still really not looking for a vam so i won’t consider this car.

'Not a contender in finals*

An offroader? Well this thing is interesting. The fuel consumption is terrible, and the car itself isnt cheap, but it is extremely safe. The reliability is also great and service costs are low. The 4x4 drivetrain might be nice to have in winter. I will definetly try this out.

More offroaders? Well the safety is good but not as good as in the Siberia, and the reliability isn’t as good either. the car is also a lot lighter but the fuel consumption is just as bad as in the Siberia. Wait, this thing is FWD? Ok, definetly not going to consider this.

This car looks good, and is cheap too! Safety and reliability aren’t great, and neither is fuel consumption… The service costs are really cheap, but the other factors make this car undesriable for me.

Um, this car is really weird-looking. The fuel consumption, safety and reliability are quite bad too. Not interested.

This thing looks nice. The fuel consumption is also decent, and reliability is acceptable. The car also is really safe, and isn’t that expensive, so i might take a look at it later.

Jukka is finishing his coffee as the phone starts ringing in the living room. Jukka goes to pick up the phone and it’s Sirkka.
“The car broke down again, it doesnt start up and now i’m stuck in the fuel station, can you come here to help me?”

Jukka says he is there in 15 minutes, hangs up and goes to help Sirkka.

END OF PART 1 OF THE PRELIMS, NEXT PART IS GOING TO BE POSTED TOMORROW

I’m not even mad that I din’t make it into the finals. Tbh I found it hilarious.

Oh well, guess I blew this competition, too. Cheers to the finalists.

Oh well, guess I blew this competition, too. Cheers to the finalists.

Errr… which of the cars above is yours then exactly?

Not in the finals… Again…!!

@Mad_Cat I don’t quite know about the case in European and Japanese cars, but I know for a fact in American cars you could easily order a radio totally separately from the trim of the car. Plenty of cars you might say had a “premium” interior like the Ford LTD didn’t come standard with any radio.

@MONARCH I think he was pointing out your car hasn’t been mentioned at all yet; it wasn’t in the first prelim. You aren’t ruled out, yet at least.