The Hunt For A Star Car! - Blurred Vision [UE4 - Completed]

Hey, kid. If you don’t know me by now, my name is Clover Locke. You might know me from my previous work in The Place I Once Knew, The Race Against Time, and Air GL-0. I’m proud of these three films; I’m not one to gloat, but each did win at least 1 award each, and The Race Against Time even won an Oscar. I ain’t kidding around, kid. This is serious business.

This year, I’ll be directing the film Blurred Vision. It’ll be similar in idea to The Place I Once Knew, with heavy inspiration from Japanese culture; I like to reference from countries which aren’t really popular, you know? I’ve seen some Japanese cartoons, however, and I reckon that they could be the next big thing. But hey, don’t take my word for it.

The movie takes place in contemporary society, in the busy streets of Los Angeles.

This being a movie focused on racing, the choice of cars is essential to the movie’s style. We want our cars to fit the characters we have, and fit them well. Authentic car chases are a prime focus for this film.

TL;DR
The year is 1985. The production of an action-racer movie, Blurred Vision, is going to begin production. Clover Locke and her crew expect you to take one car from your company’s lineup and find a way to apply it to a single character. Your job is to contribute one car to the production of the movie. Here are our rules…

91 RON only.
Production Units must be under 135 and engineering time must be under 85.
No racing parts are allowed (Semi-Slicks, Racing Intake, etc.)
As few seats as you can, with 0 quality basic interior, no infotainment, Hydraulic Steering without ABS, and 0 quality Advanced 80s Safety.
The maximum cost, with no markup, will be $15,000 for a stunt trim.

There are 8 different cartegories you may submit 1 car for.

Adam Caine - Villain - Cunning, unassuming, but utterly destructive. He’s a classy man, but what lies underneath is devastating; the same should go for his car. It should ooze sex appeal.

Sasha Rouge - Protagonist - She’s a girl with a big heart and a short fuse, but alas she is the leader of her crew. Don’t forget; she’s a sexy character. Her car should be sporty and fast with a sex appeal the other cars shouldn’t be able to match (except Caine).

Michael Mason - Supporting Character - The function of Mike is to be the “battering ram” of the squad. His car doesn’t have to be a truck, but it should be very butch and have the ability to look like it could rip off one’s head at any moment.

Angelina Griffith - She’s quiet yet open, and heeds by her rules well. As the group’s lead navigator, she definitely has to have a smaller car which can not simply just outrun the police, but run rings around them.

Jared Sekai - A mysteriously witty and funny character, Jared’s the guy who has to inspect and plan out his locations. His car is definitely one which is filled with tech.

Kintsugi Goonies - Of course his hitmen are going to need cars. Unlike Caine’s classiness, these vehicles should be loud and brash. Feel free to be creative with these.

Heist Scene vehicle - One the main scenes in the movie is a heist scene. The car stolen is extremely, extremely expensive and ludicrously fast. Were you to submit a concept car, now would be a good place; if not, a supercar will do just as well.
EXCEPTION - The Heist Scene vehicle may be a model year up to 1987.

Now pop on some sunglasses, and get cool.

I made a mood room for everyone. You know, just to get into the spirit.

I haven’t given any thought to entering all-UE4 challenges up until now, but this one is tempting enough to get me interested at the very least.

As few seats as you can, with 0 quality basic interior, no infotainment, Hydraulic Steering without ABS, and 0 quality Advanced 80s Safety

Does this also apply to the base car (which is being used for beauty shots)? And are there also any PU/ET limits for the engine?

Hmm, maybe it would be worth considering an exception for Michael Mason and permit people to submit a classic muscle car for him? I think it would fit his car agenda nicely and make him stand out when everything else is early to mid 80s.

All the characters are completely open to interpretation. Hell, you could submit a Ford Festiva in drag, as long as it fits I sits.

I like this sort of challenge. Except I have no clue where this fits in. It certainly isn’t black enough to be a villain’s car. 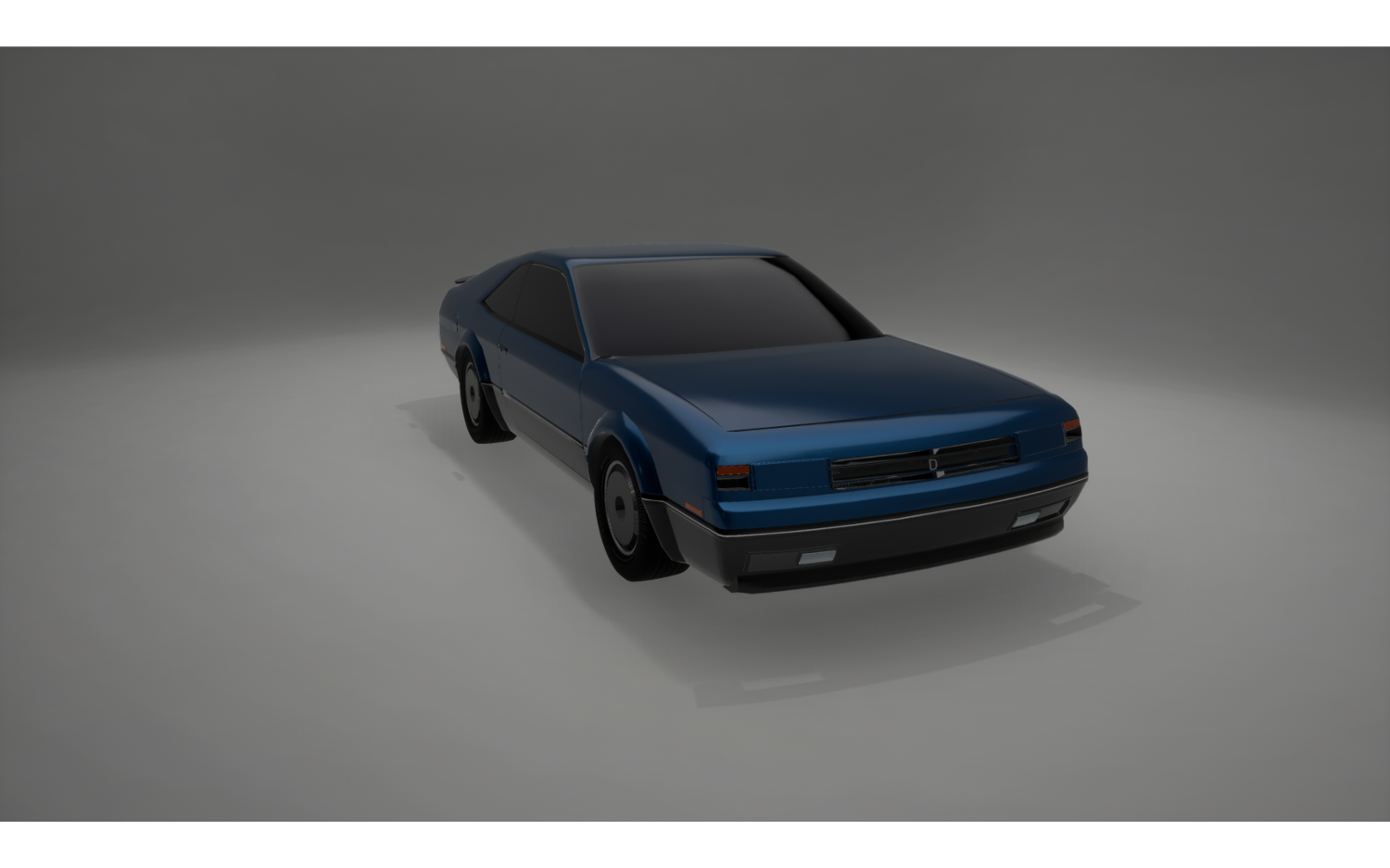 Oh. So I can’t submit the mighty Dolphine MK3… 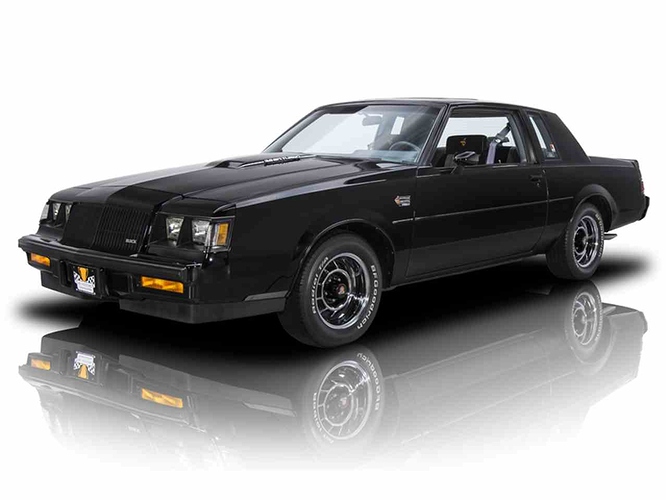 Is the competition still open?

It wasn’t quite open to begin with, so I’m not confident enough to open it yet.

I think that “yet” is the key word we wanted to hear.

That’s cool. I was looking for something that just isn’t available yet. I’m no modder, so I don’t really feel comfortable requesting things on the forum; I’m just hoping it will be available before this challenge officially opens. 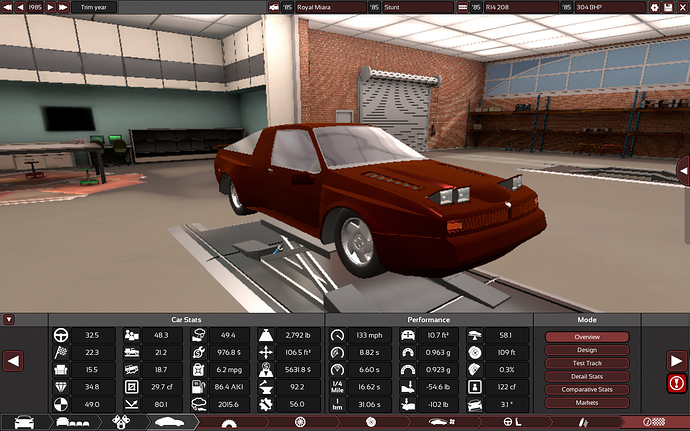 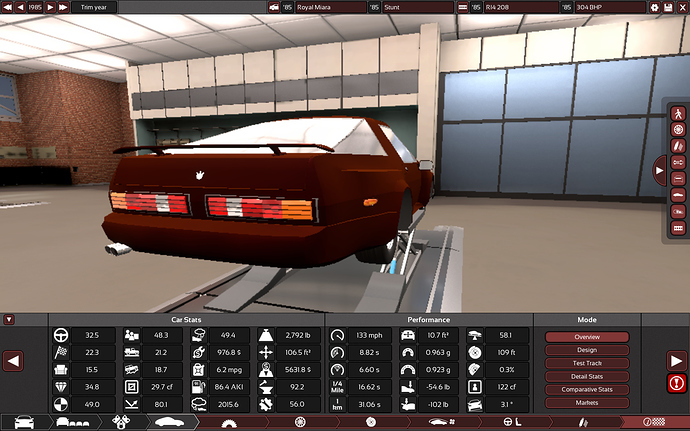 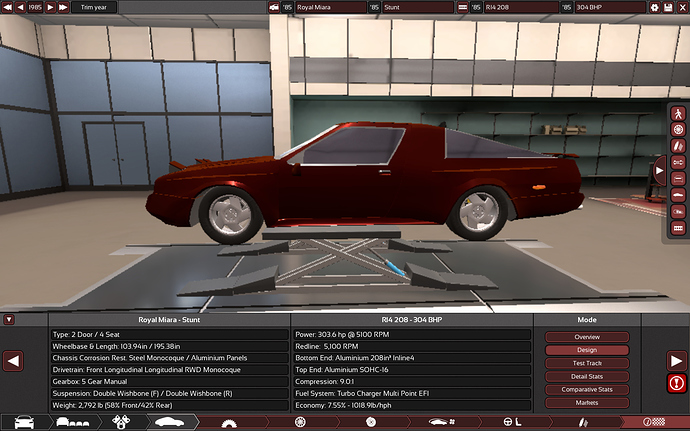 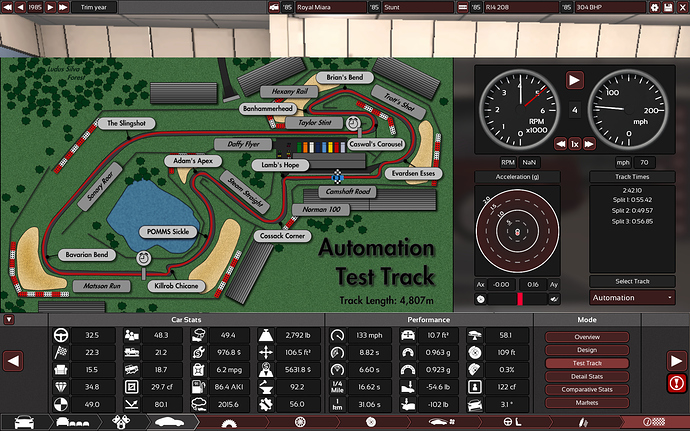 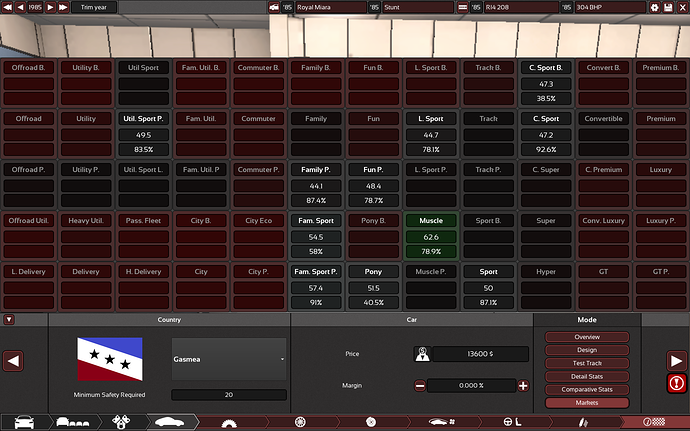 I know, I shouldn’t multi post, but… Where are the rear view mirrors? I don’t think that car is even street legal without mirrors.

There are so many things about this car that looks so off my mind is imploding.

If the tires are staying that way, why bother with wide fenders?

For a car with 300 horsepower it’s not all that fast either. And it’s too thirsty to boot.

Anyway, has the competition actually opened yet?

REALLY tempted to post my car (Zasteros Feirhein) in this thread because really it isn’t out of place in the 80s
and it has perfomance to keep up to speed.

The problem really is that i havent found the right character and that the challenge is not really open. 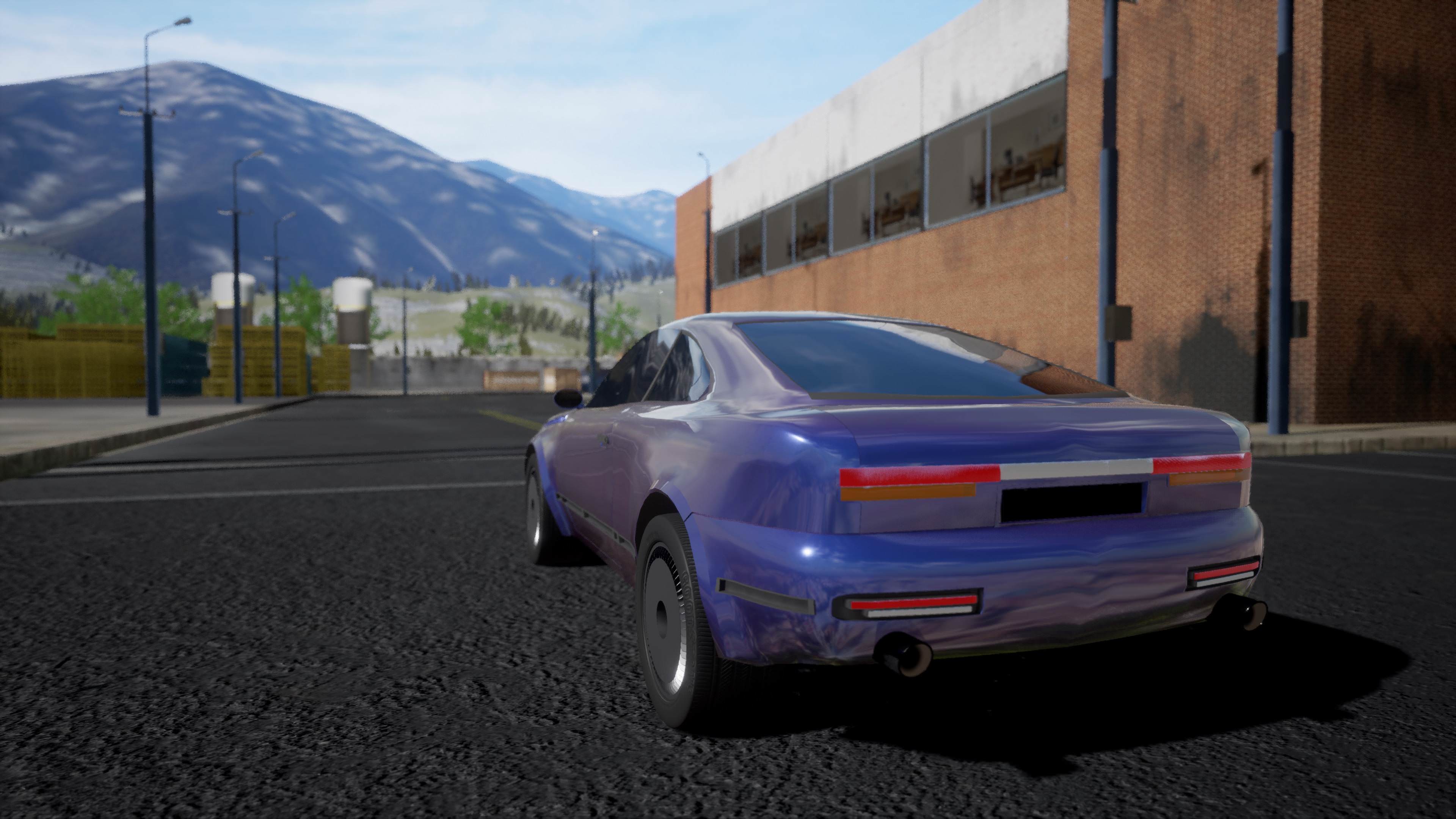 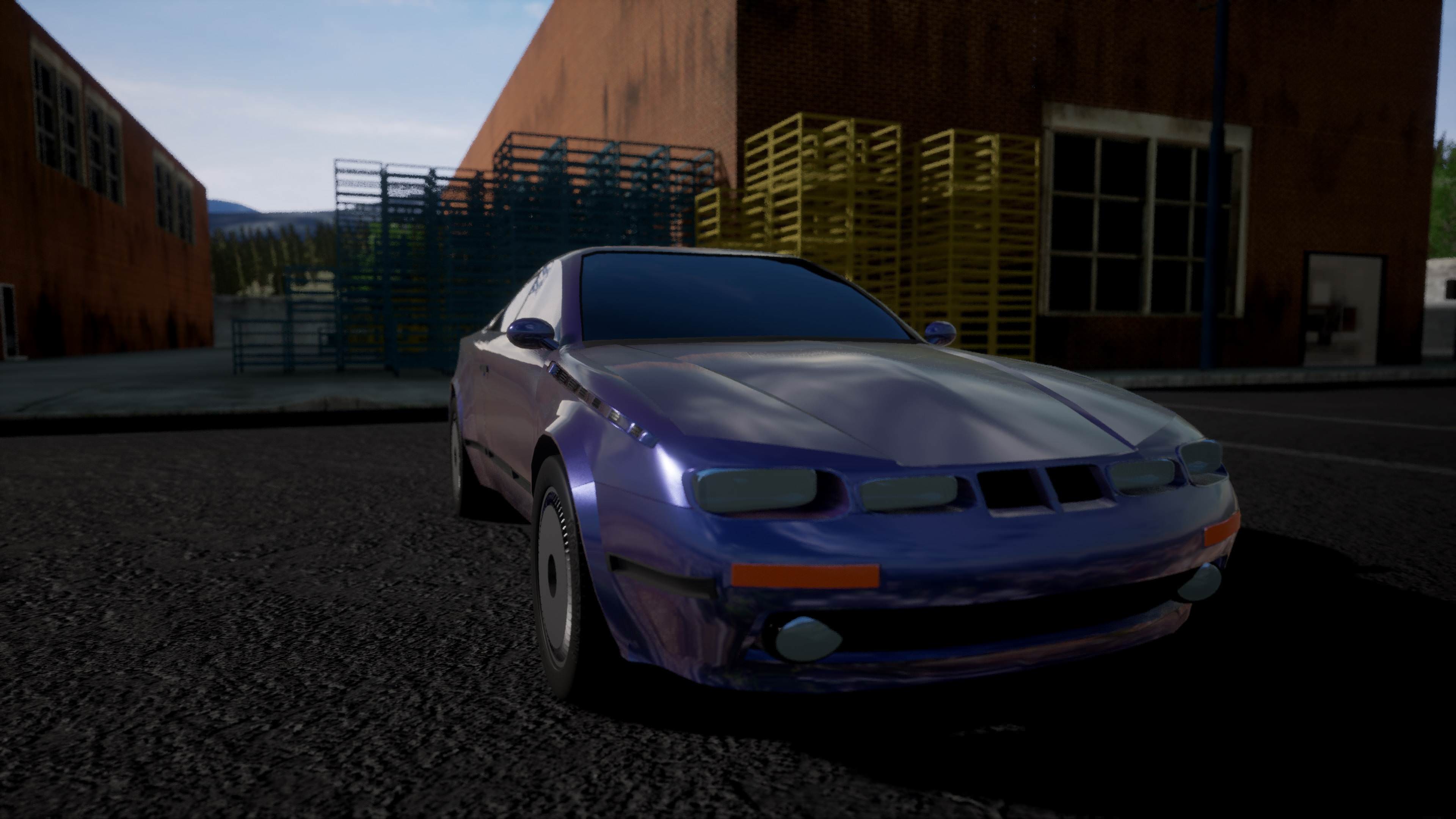 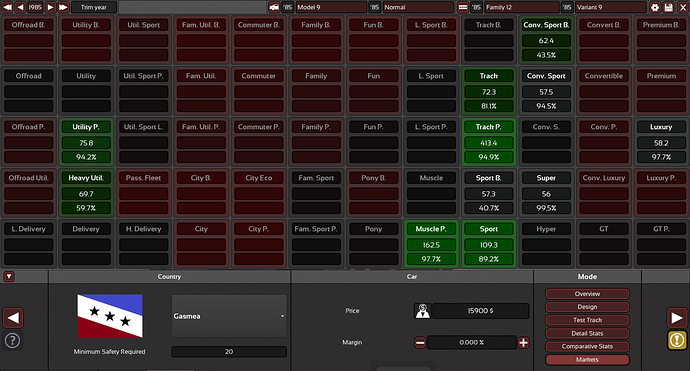 Here is a updated version. Only $100 more expensive. 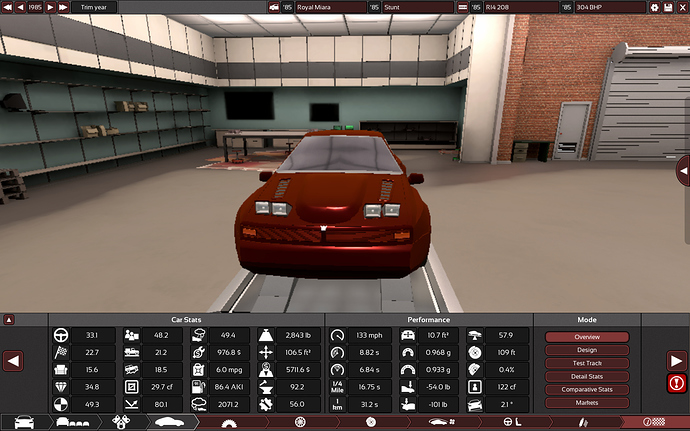 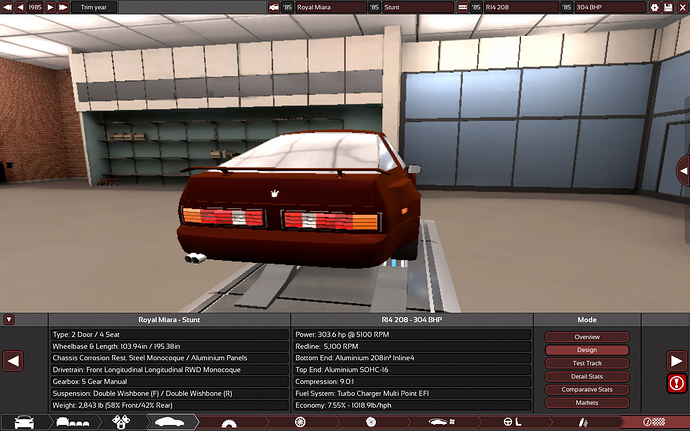 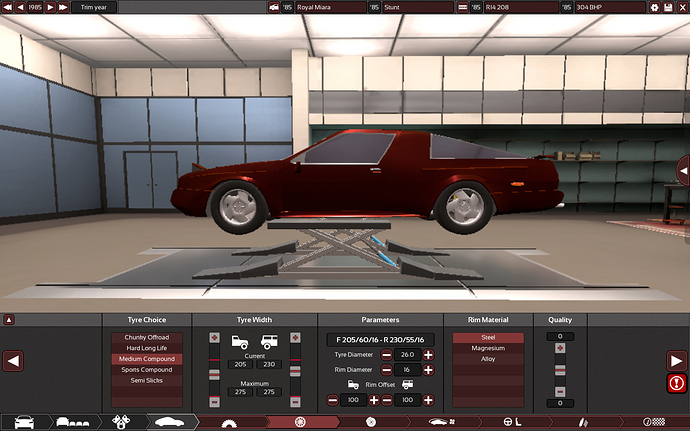 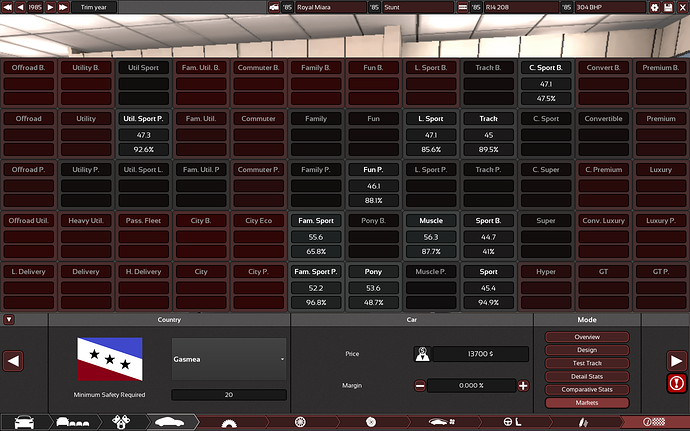 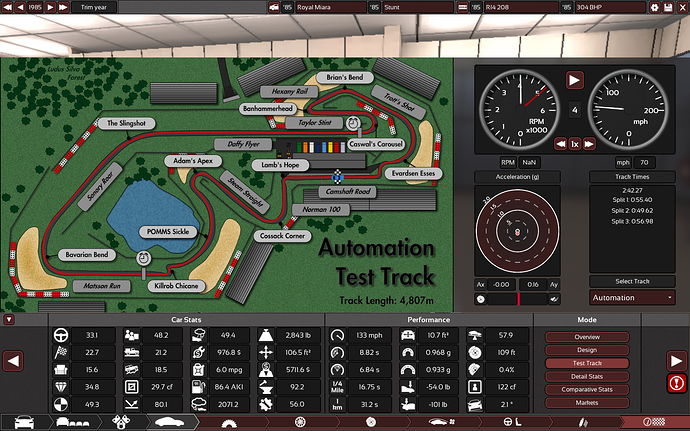