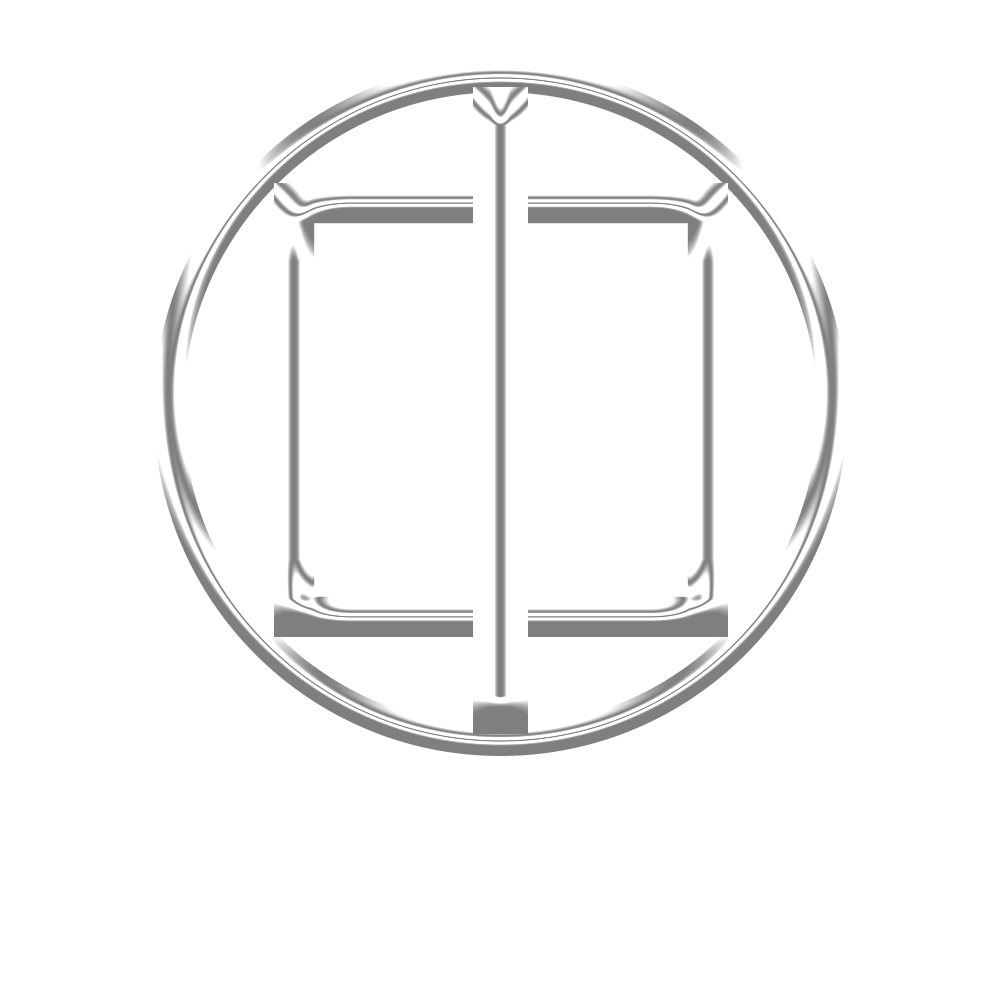 Mei Ling is a Chinese automotive company based in Wuzhou, Guangxi. Founded in 1980, the company initially specialized in heavy machinery before shifting half its focus towards the compact vehicle market around the mid-90s.

Their vehicles were shabby, hastily put together, and as a result, very unsafe. Consequently, they were ultra-cheap, easily servicable vehicles that found heavy use in utilitarian and fleet purposes. Notably, the QC and QY series, both which launched around the early 90s. During these times in the 90s, the company had yet to gain certification to designate their model names under private vehicles, resulting in compact vehicles acquiring the leading digit “6” in their names which typically would have corresponded to buses.

Today, the company places great emphasis on creating inexpensive and utilitarian transportation for the least affluent parts of the Guangxi region, locking horns directly with Liuzhou’s Wuling MPVs and microvans. This included the DB-series, and more recently, the MC-series MPV.

The brand’s greatest niche was their early-day sedan trucks, which did not involve much more work than hacking the rear off their vehicles and creating a bed out of it. These were later phased out in favour of actual trucks around the mid-2000s.

Although this brand is early in development, I plan to release a lot more vehicles in the future. Stay tuned, this thread will be updated whenever I’m able to do so!

You already have lore for your other Chinese brands - Honghu is the core range, Huangdou is a budget brand and Jinhe is the upmarket premium division. But what about this one? And is it also part of the Honghu group as well?

Anyway, all the cars you’ve made so far have proven that “Made in China” is no longer a set of dirty words, and is instead something that its customers can be proud of. I can’t wait to see how this one develops!

But what about this one?

Think what people stereotype how Chinese brands are supposed to be like, that’s what this brand is like.

And is it also part of the Honghu group as well?

Nope! This one is based in Wuzhou in my home province of Guangxi.

Anyway, all the cars you’ve made so far have proven that “Made in China” is no longer a set of dirty words, and is instead something that its customers can be proud of.

The Mei Ling QY-Series SUVs were brought into production in 1990, starting with the first-generation QY6486QW. The SUVs were heavily based on existing SUV platforms, just a lot more shit. As a result, these Mei Lings were readily-equipped for off-road use with choices between RWD or 4x4, and manual lockers as standard equipment. What was original on the QY-Series vehicles were the fascias, the interior as well as most of its running gear including the engine.

Interior of a XiangJiang via. ChinaCarHistory

Unlike the drastically-smaller QC-Series microcar, the interior of the Mei QY-Series looked rather… decent? At least in the higher 6487 trim. In the end, all you got was a bit of cloth cushioning on the seats to hold you in place, a dinky radio in the middle, some heating and nothing much more.

The QY-Series used a 1980 4.0 litre gasoline inline 6 built in-house and used in other larger vehicles, outputting roughly 133 horsepower and 193 lb ft of torque. The alternative option was a 2.5 litre inline-4 developed by the long-since-dead Guangzhou HAC company.

1996 saw the introduction of a facelifted vehicle, which threw a bit of glass over the front sealed beams, painted the bumpers, and replaced the taillights with a single composite unit.

…and the higher end 6487QW was updated too! Look at all that chrome!

But of course, Mei Ling being Mei Ling, these vehicles ran into many many quality issues. The panels and the ladder frame were all very prone to premature corrosion, whilst the OEM throttle cable would simply snap and brake lines, crack and leak. Electrical issues were prominent within the headlight connections too, resulting in many a broken housing. Thankfully, like Huangdou in the past, these parts were absurdly cheap to replace. Well… besides the rust.

The classic Mei Ling QY-Series is still in production today, solely for fleet use. The newest civilian version is yet to be made, but will be on here sooner or later

Succeeding the older QY-Series (which is in fact still produced today) was this redesigned model which ran until 2012. True to the original QY-Series, the newer version maintains its barebones offroading and fleet-specific roots, with not much changed besides the shell.

That’s right! You heard me! not much changed besides the shell! You get the same 4.0L inline-6 in service since the 80s, just a tad modernized with a newer fuel injection system. Now you might suspect it to be pretty underpowered for such a large vehicle, and you may or may not be correct. Roughly 190 horsepower propels this big hunk of metal forward to 100 km/h in around 13 seconds, but screw it. This car was only sold in China anyways.

This meant that you got a crappy rust-prone SUV made out of glorious Chinese steel! Nothing gets more patriotic than that! Despite its very apparent quality issues reminiscent of its predecessor, the newer QY-Series was incredibly capable off-road. Like… stupid capable. You could throw it at any cliff and it would climb it relatively unscathed. Perhaps this could be attributed to its live axle front suspension and leaf rears, which made carrying things in the back no problem at all. Passengers however, probably suffered quite a bit when the vehicle was absent of much load.

Due to its strong carrying capacity, capable off-road performance and cheap package, the newer Mei Ling QY-Series saw its use in police fleets in the Guangxi region, albeit being in small numbers.

Just like its predecessor, trim options were barren. A fleet trim was available, clad in mostly plastic while a slightly more premium comfort trim was offered. In reality, you just got seats that were less like sitting on cardboard.

Expect the interior to look like this. Mmmmmmm plastic. No wonder the police force opted in for the more comfortable version.

Lots of fun can be had with this vehicle. I decided to throw on one of those giant bodykits you usually see on Prados and such. It looks quite hilarious I have to say.

All in all, the 2005-2012 generation of the QY-Series was its predecessor’s issues in a new shell, just modernized and made equally capable, perhaps even more capable than its previous generation. Thankfully, the parts just like the last generation were easy to replace, maintaining the Mei Ling QY-Series’ place as one of Guangxi’s staple workhorses.

The earliest generation of the MP-Series vans were simple and barren. On the MP6461BW95 (or the base model), the company’s signature pignose grille was very pronounced - typical of Mei Lings within the early 2000s. The MP6462BW95 (guess what this one is? The “premium” version!) hid said design language a tad better with a full chrome grille. 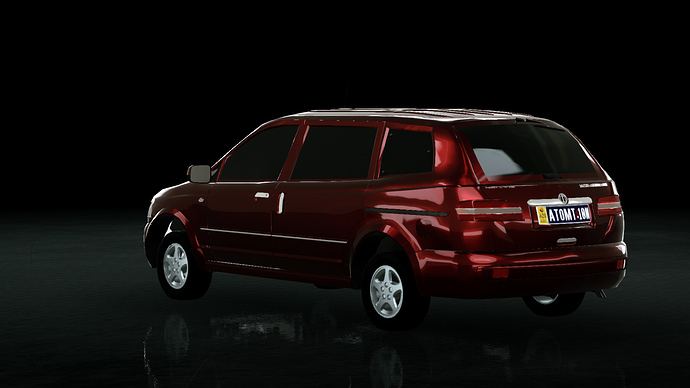 The rears however, were pretty much identical with small diferences in trim material. 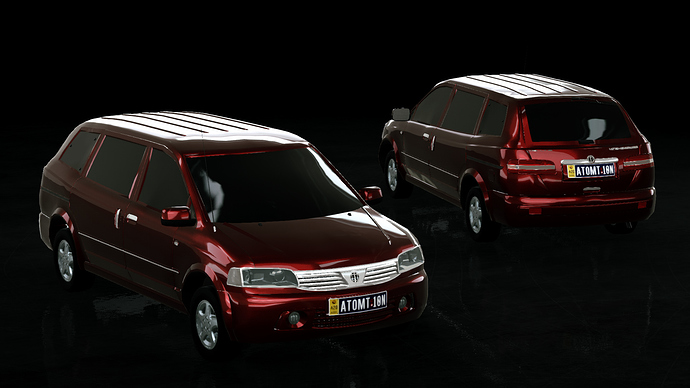 What did set the upgraded trim apart from the base model were alloy wheels, fog lights and better seats. Absolutely game-changing. 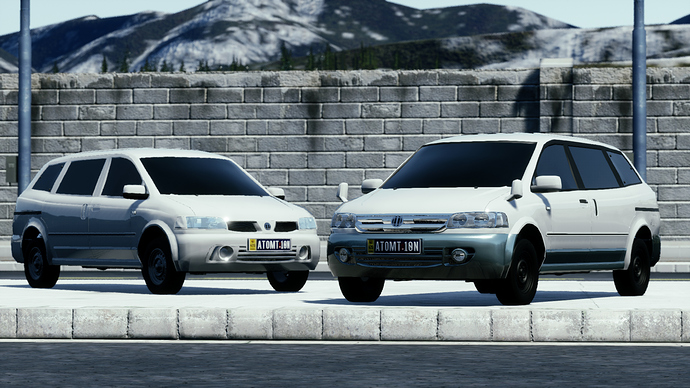 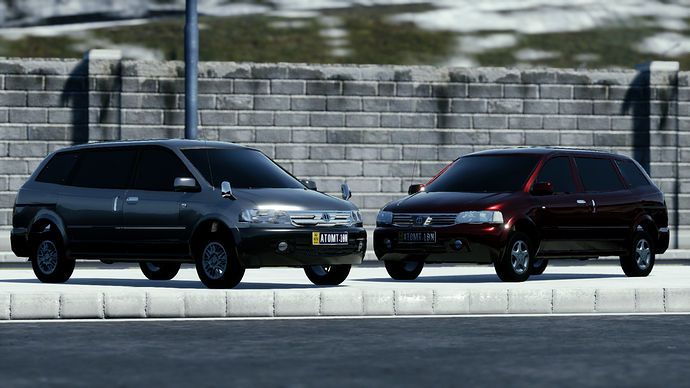 The earliest generation was kept on the market for roughly 6 years until it was eventually facelifted for another 6 years on the market. The facelift considered of utilizing the new Mei Ling grille, also seen on the facelifted QY-Series SUVs. 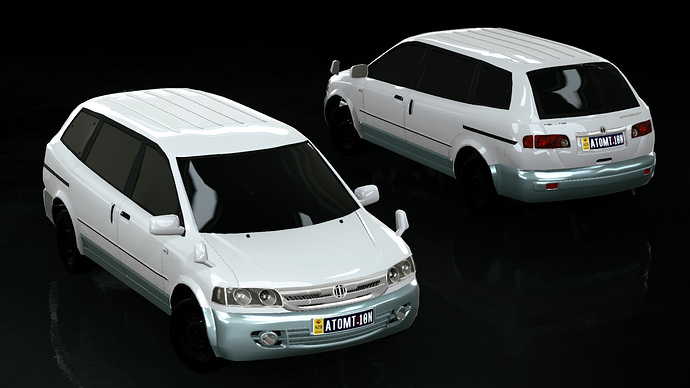 The lights were modernized, while fog lights were now standard on the base model. The engine got a minor upgrade with a modern multipoint injection system. You could get some popping fender mirrors on it too… for… some reason. 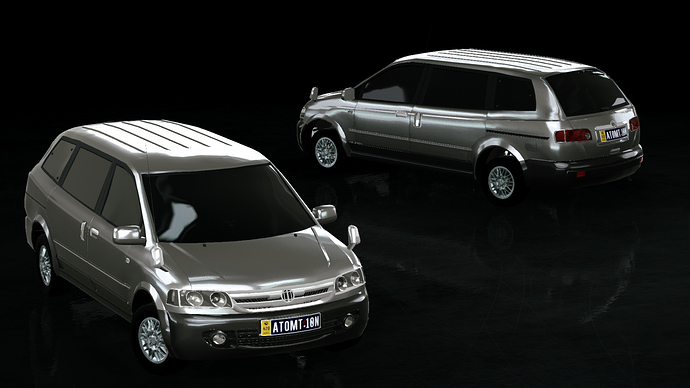 Two-tone paint was the norm on the facelift. Many different combinations were available, although most clients opted in for a solid white colour. 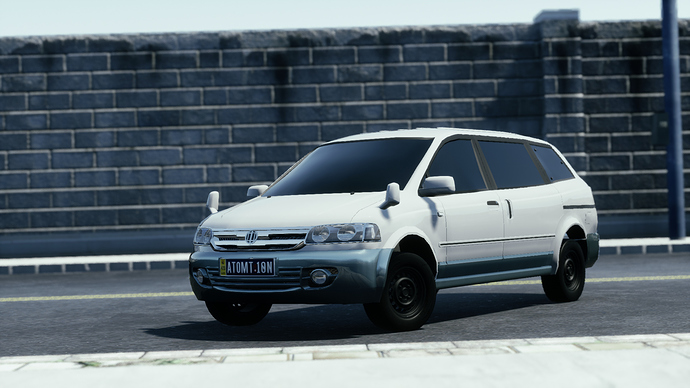 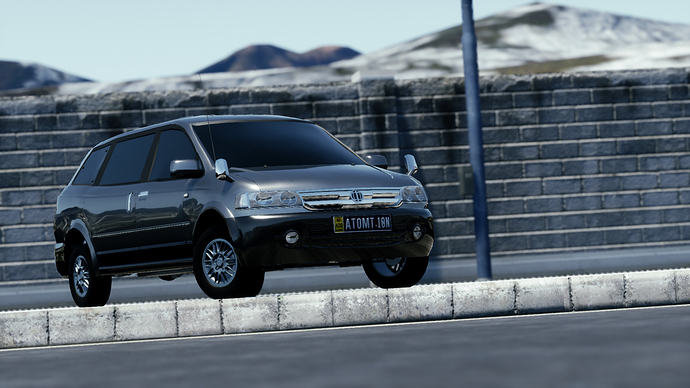 A couple photos of the facelifted MPs in some sunlight. 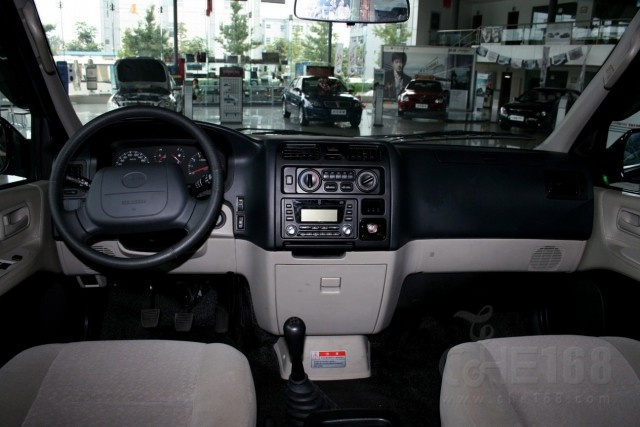 Expect the interior to look a lot like the Jinbei Granse’s. 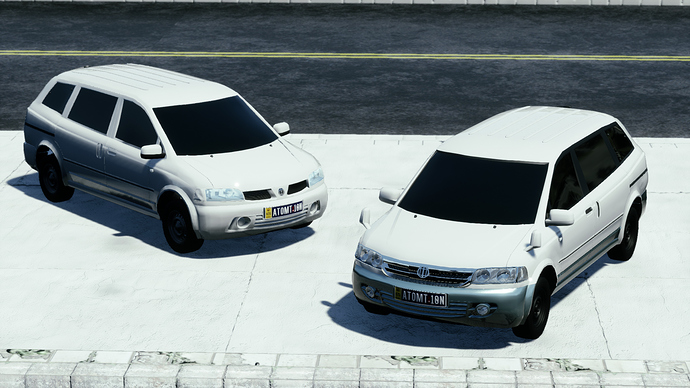 The MP-Series vans are still around in the Guangxi region today, with an ample amount of surviving facelifted examples. 1st-generation examples can still be found in smaller towns, albeit being in derelict condition. The MP-Series vans served their purpose well until they were eventually replaced with a newer generation in 2013.

Thanks for reading y’all. I’ve been experimenting with some new formatting, closely inspired by ChinaCarHistory. Hope you guys enjoy it!

Quick Articles: It’s a… Actually, What Is It?

What you see is a"Tuo La Ji", which translates into “tractor” in English. Because the generic tractor you see around the world is also lumped into the same term, some have resorted to calling these “tiller trucks” for lack of a better name.

Typically seen in rural China, these vehicles have become a staple for farmers across the nation. Although a dying breed, these trucks can still be bought today for little to nothing. This Mei Ling example manufactured since 1980 fetches around $3000 USD in todays money.

To even expect a decent interior in these vehicles would be a pipe dream. But hey, the Mei Ling had door handles! Actual door handles!!! Now THAT is luxury.

These trucks are powered by tiller motors. Unfortunately, due to the limitations of the game, I can’t really model one out myself, but oh well… it’s just how it is.

Of course, these types of vehicles are quite the eye-catcher for the foreigner…

…and hopefully the Mei Ling tractor does the same for you

Will Mei Ling have a 面包车?

The closest vehicles so far are these two.

The beige MPV will have to go through some TLC though since the morphs reset, but I’m planning to redo the entire fascia on it anyways.

Interesting, we have somewhat similar stuff in Bangladesh, we call these Power Tillers. But these things are usually more barebones, power range is usually 10-30 hp and its highly customizable so you could attach ploughs or beds on the rear. Price differs from the equivalent of $250-$300 to $2000 depending on whether it’s new or used and the power.