Calvinator started out as La Playa Automóvil in 1901 (Beach Auto) in South Calva. The company made vehicles for the beach. No vehicles were in great enough condition for an image. In 1910, a car company named Royal was started and purchased La Playa in 1911. The brand was discontinued, and Royal produced their first city vehicles. The Headquarters were moved from South Calva to Calva City in 1913, where the company designed an off road truck called the Desert Spider. It was the only vehicle till 1933, When the Calvainian government bought them so they could provide Jobs for unemployed Americans. WWII begins, and the Company produces a truck that can compete with the Willy’s Jeep called the Predator. The Calvainian gov, however, ends ups unable to fund FMC so they liquidate Federal Motors and sell Royal to the 2 highest investors, John and Marcus Calvinator. The war ends, and the extra money that the brothers had lead them to expand the Miara Brand and Ultimately form a new company called Calvinator. The organization is then renamed in 1946 to the Calvinator Auto Company.

In 1948, the Brothers release a car designed by Sara Roxy called the Orange. It was to compete at the Ryland International (a 15 mile endurance track) in a Car Endurance Championship Called the IRA (International Racing Association). The orange was capable of 120 mph, but was mincemeat to the other cars, Including the Rileeni Speeder. Rileeni then Announced a new car in 1952 called the Falcon, a car that used a technology from WWII called twin turbo charging and it was said to be one of the fastest cars on Earth. Calvinator realized they needed a new car, so they go to Royal for a car they have been working with for awhile. The Royal Miara was a luxery car, but it has speed (130 mph), but the Brothers wanted even more speed, so they Hire a WWII vet from Archana named Calvin Null, who took the Miara and made 2 new prototypes. The first prototype had an engine that was naturally aspirated and could go 135 mph, but was made of Aluminum, quite expensive for the time. The second prototype had a twin supercharged engine with over 500 horsepower and could go 160+ mph and made of steel. It was dubbed the Miara Model C (Model C became the official name). It was a sleeper car.

In 1955, the car was ready, and released to the public. It was small and fast. It went up against the Rileeni Falcon and won 9 of 13 races. The car was released again in 1956 with 702 HP and could go 168 mph, but the car was disqualified halfway through the championship cause it beat the other cars with relative ease. Production stopped in 1957 and the Miara was dominating the streets again.

In 1963, Calvinator cam out with the Fjord, a muscle car with 410 horse power generated from a CV8 388 410. It went about 140 mph. The Royal Cruiser then replaced the Fjord in 1965, and in 1968, the Calvinator version came out. The Bruiser (like the Model C) was another sleeper with over 600 HP and capable of 160 mph. It was a top heavy car, but this muscle car was the fastest for its day. In 1967, the Model C came back with a smaller twin supercharged engine, but much faster. The car went about 180 mph. The car went back to the race after the IRA lifted certain restrictions in 1965. In 1968, The IRA placed another restriction that put a limit on horsepower for car entry (450 BHP max) Calvinator solved this by putting a grind gear in the Model C engines, which put an extreme load on the engine when it tried to go past 430 BHP. This gear would be free spinning at first, but at a certain heat, the gear would use nitinol to make a gear inside the slot it was in, causing the gear to grind.

1968: the Miaraland Imperial Government (the car Miara was named to appeal to the country just north of the Calvainian Republic) decided to create their own Racing organization called IARO (International Auto Racing Organization) and planned a track that would be over 35 miles long. It was called the Miaraland International (1986, it was informally called the Danger Zone cause it’s high fatality rate skyrocketed above the other track’s history of fatalities internationally combined in just one year cause it had hills and cliffs that weren’t guard railed or lit very well and 90% of the fatalities were Calvinators, because they were fast and heavy cars that had handling issues). The first segment was finished in 1969, and the rest was finished in 1984. The track is still 65% dirt cause it is expensive to maintain. This track became the new place for 24 hour endurance.

1984: Calvinator releases a new Model C, and it is the first to breach 200 miles per hour. Calvinator also purchased Rileeni (defunt in 1998) after a win at the Danger Zone in 1987. But the Falcon was sold to another car company. Phoenix now makes the Falcon, and a concept was introduced called the Falcon R.

1995: Calvinator releases the Gen 5 Model C. The first car was built in a studio, and went 230 mph. But a problem occurred. In 1994, the factories were downgraded cause of the Enviromental Protection Agency. Calvinator had to work with inadequate machines to create the car now, so they took off one of the Superchargers and beefed up the other. This made the car slower. The car still used a Carburetor to start up. The engine of the first car (hand made) used a fuel injection system, but FI’s were expensive, especially after Calvinator had to remodel their factories. Calvinator lost all races to both the Twin Turbo-ed Falcon and the Twin Charged Falcon R. In 2001, a Gen 5B was released cause the company made a cheaper FI, and the cars started to win, but only gained 3 of 15 wins in their best year. 2002, Calvinator ordered a Mandatory Recall on ALL Model Cs and Miaras pre model year 2002. They sat in a place called the Rustyard. Many cars there still work, just need some gardening work to remove the plants. One car that was recalled actually performed like the handmade car. It had the best quality, and was found in the Rustyard in 2009. It was restored and modded and made the Fastest Street Legal car in the world in 2014 (313 mph).

2015: Calvinator releases the Gen 6 Model C and Miara. The Miara was now Twin Turbo Charged, cause now Calvinator believed all their cars should be fast. Another car that came out was the 2015 Predator Truck that was formally made in 1940-1943 by FMC. It is a 600 HP military truck that also comes out as a civilian car. 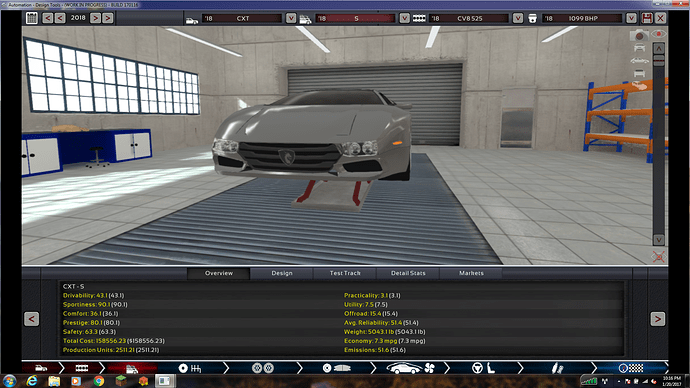 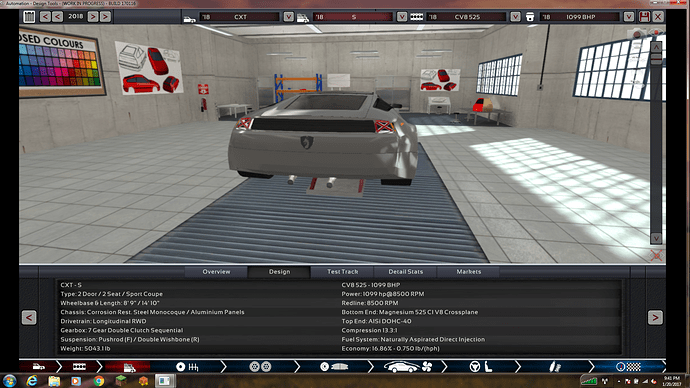 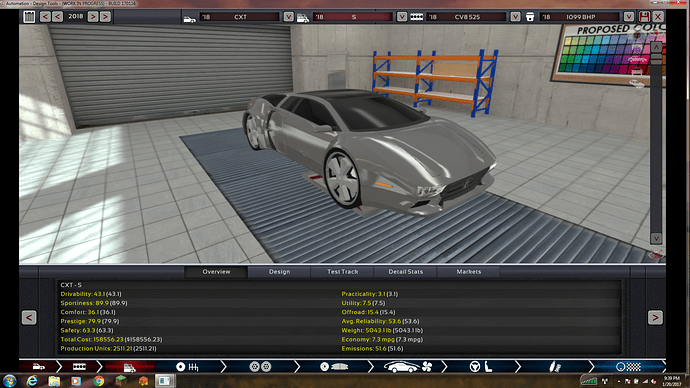 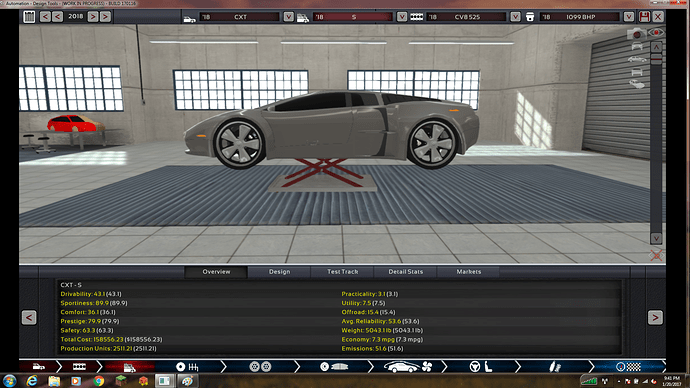 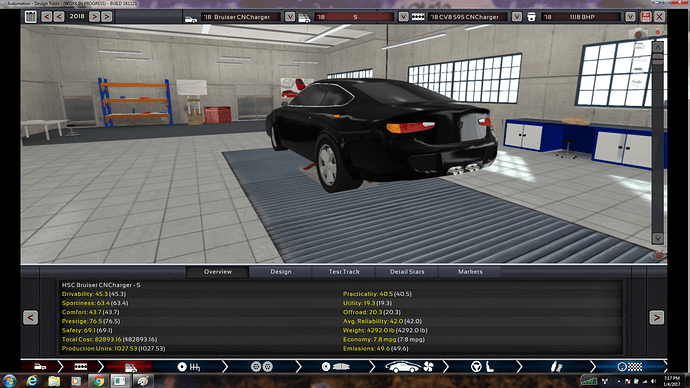 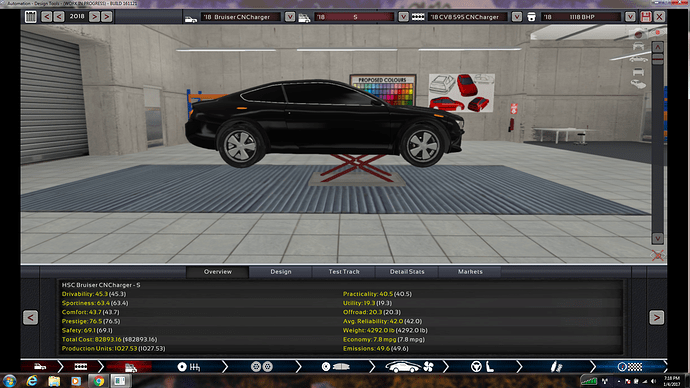 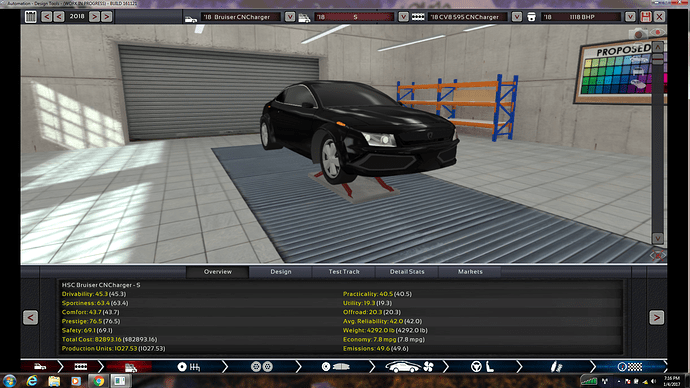 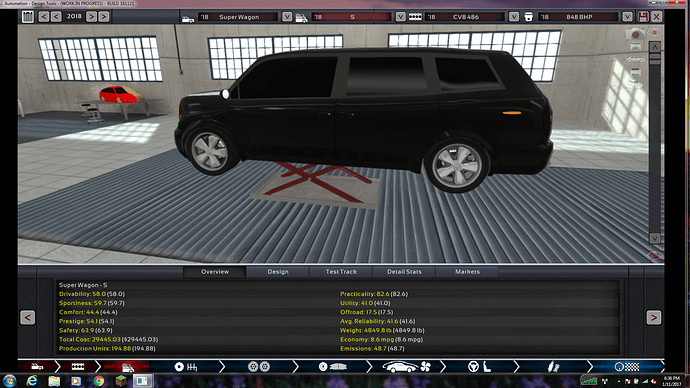 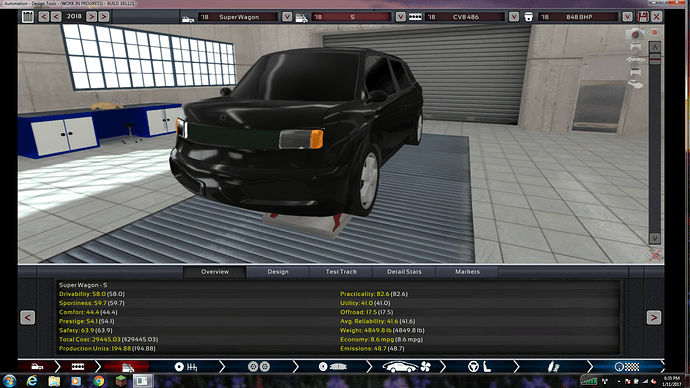 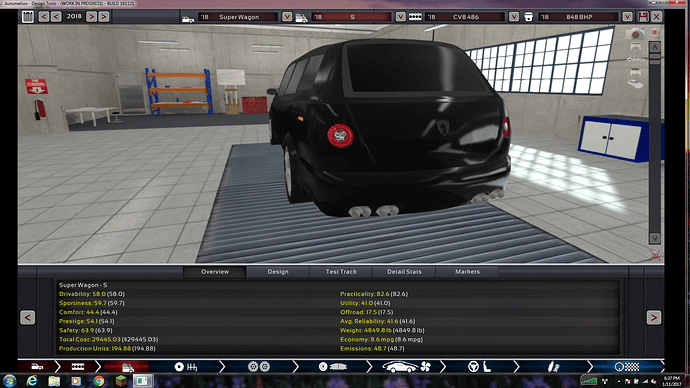 here is a new addition to Calvinator Auto Corp

Here is a new addition 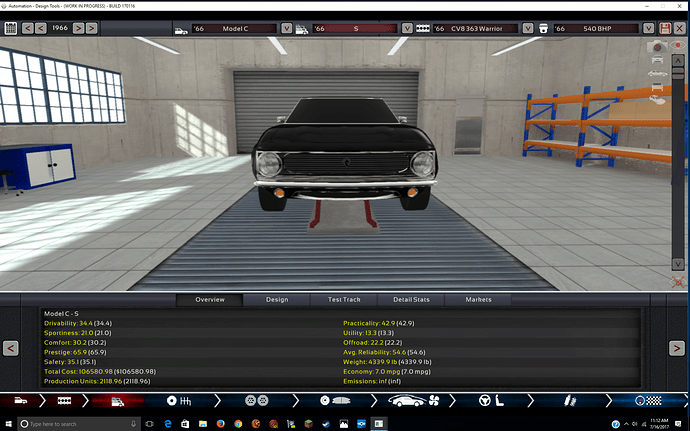 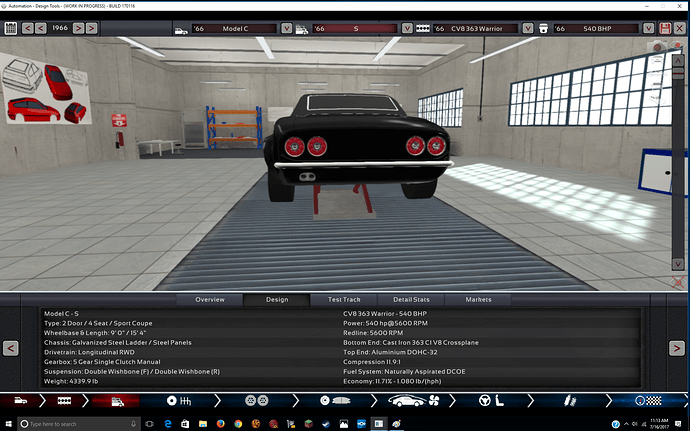 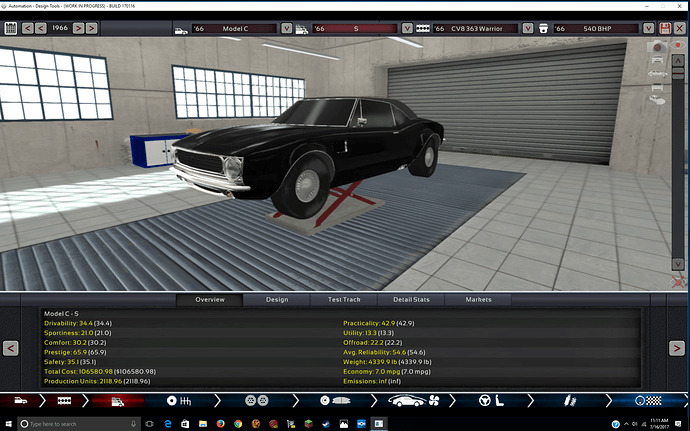 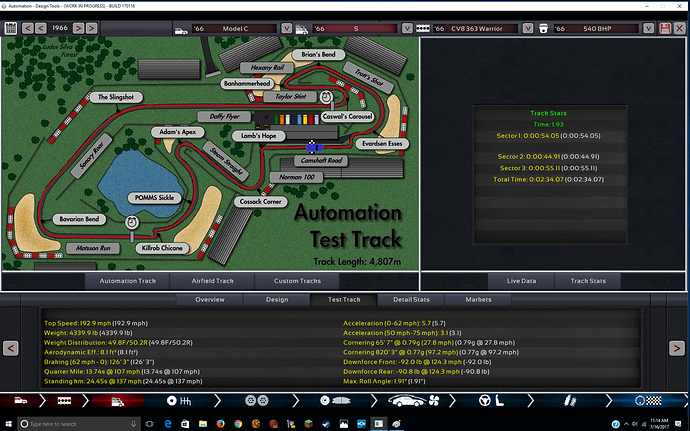 It is off pace of the 1966 brc cars iirc. And the heavy hitters of brc barely had half the power and tire width. You should stop producing cars in hour and try to concentrate on actually making them work properly

This just came in. Its the Micro C (micro car version of the Model C) 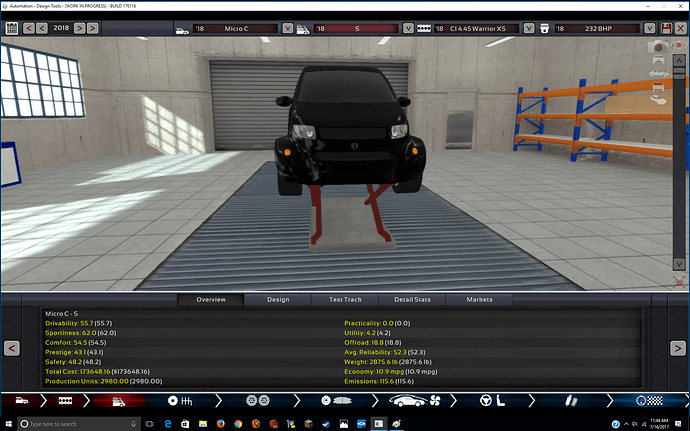 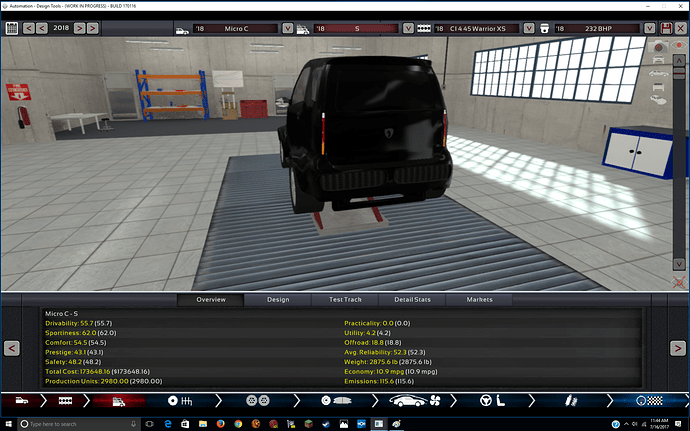 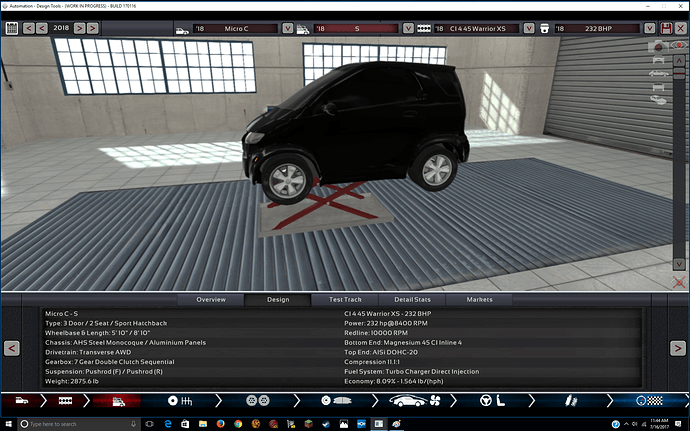 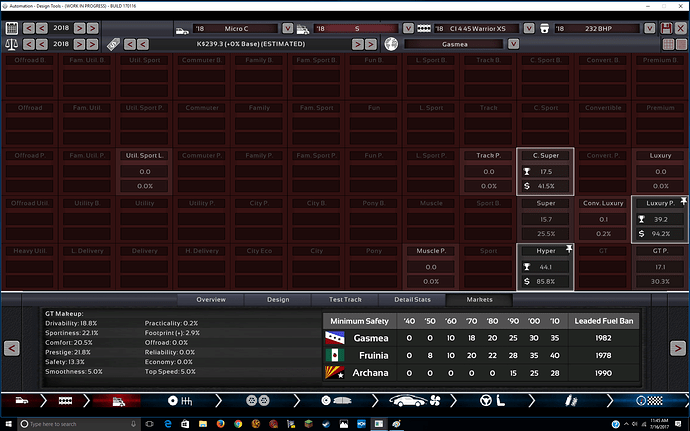 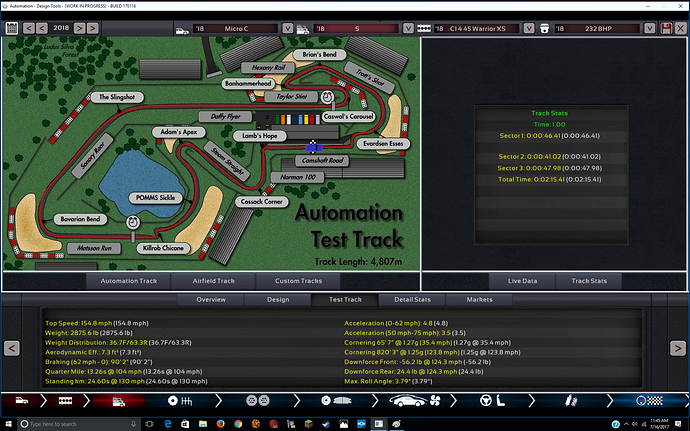 How about a bit of background story and some description of things like the styling, engineering challenges, design choices etc of your cars? Otherwise they’re all just generic things that have nothing interesting about them.

There’s 1 hour between releases. Think about what I’ve said bud

Back in 1966, the first Warrior was created. The 1967 Model C Warrior had a speed of 193 MPH, thanks to its 363 ci V8 Warrior engine. It won all the races at the IARO thanks to its speed and power, and secured it’s first lace position in 1971 with the release of the Model C Lauriville Warrior (the Aerocar version) till 1973, when IARO ban all cars with horsepower of 500 or greater.

Now the Legend is reborn. The 2018 Calvinator Model C Warrior 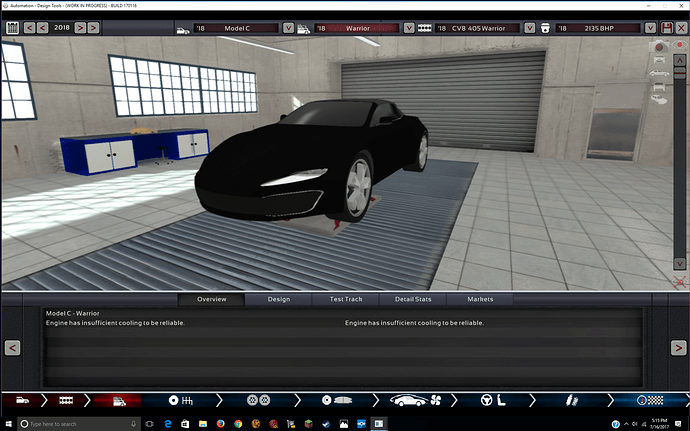 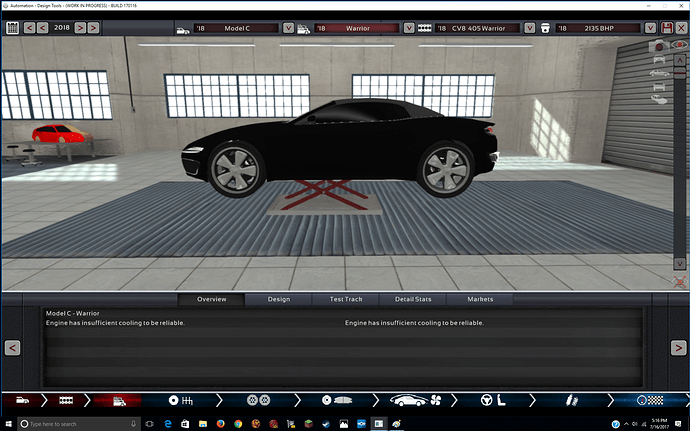 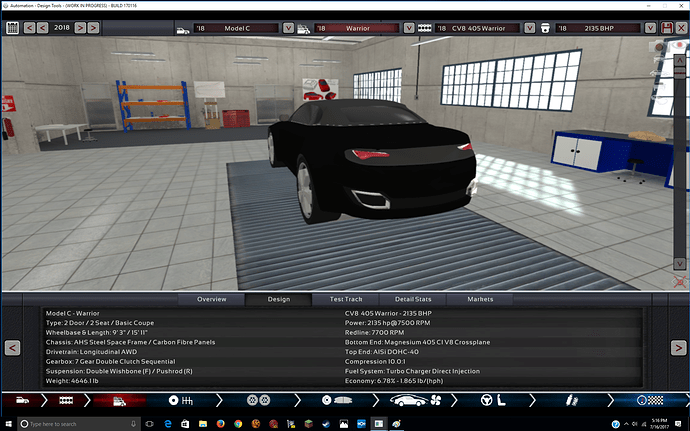 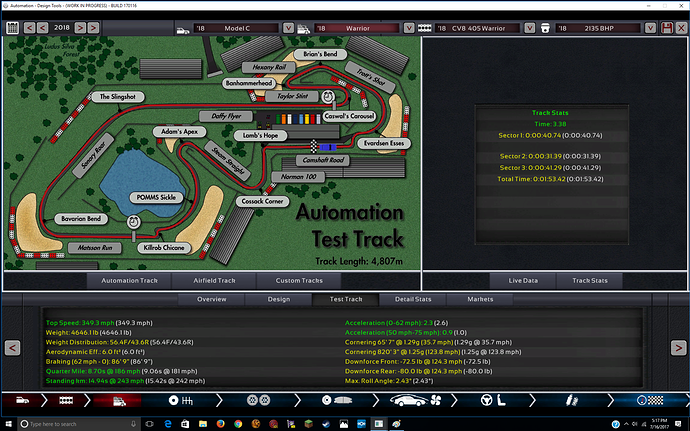 While it says the engine has insufficient cooling, their is a personal air unit to help cool the car when it nears dangerous temperatures. The Car also has no doors, because it is purely meant for racing. The car also has no paint, to help save weight on the already heavy car. Its Purely Carbon Fibre.

The Car is not available to the Public due to speed and power.

Here is the Model C Lauriville. This was the Fastest Race Car till 1972, when IARO Ban the car from racing. 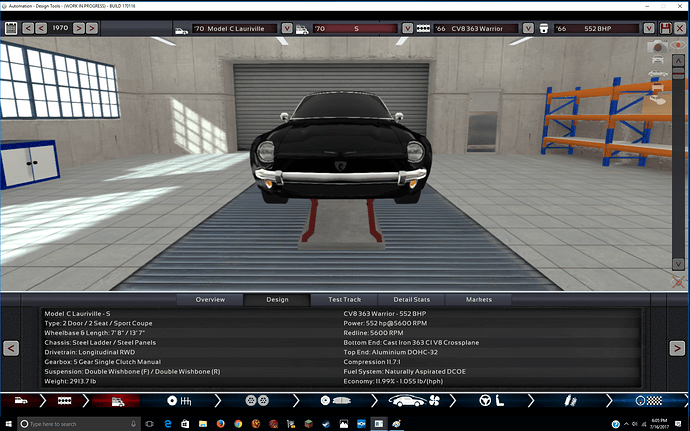 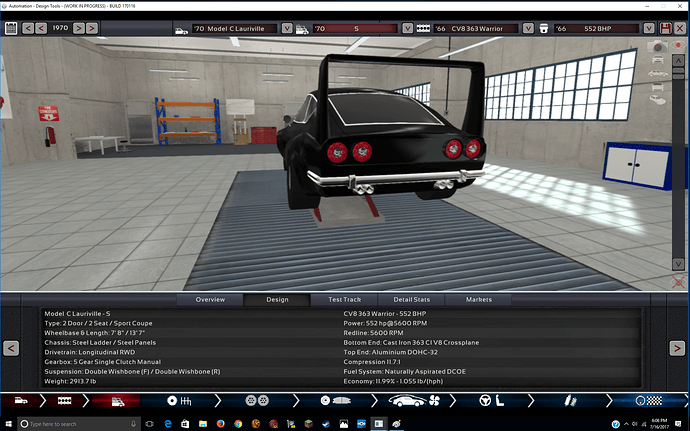 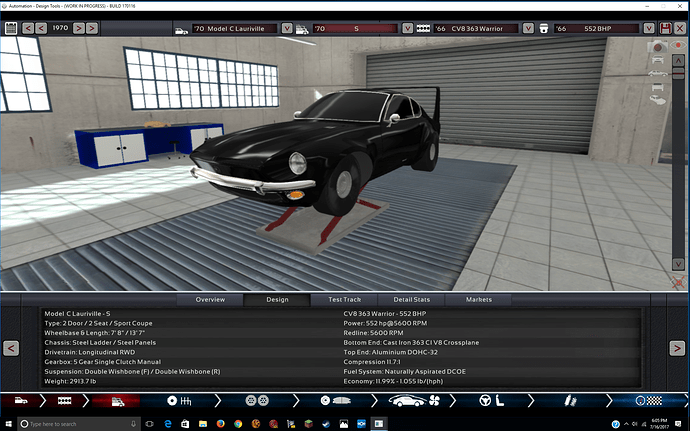 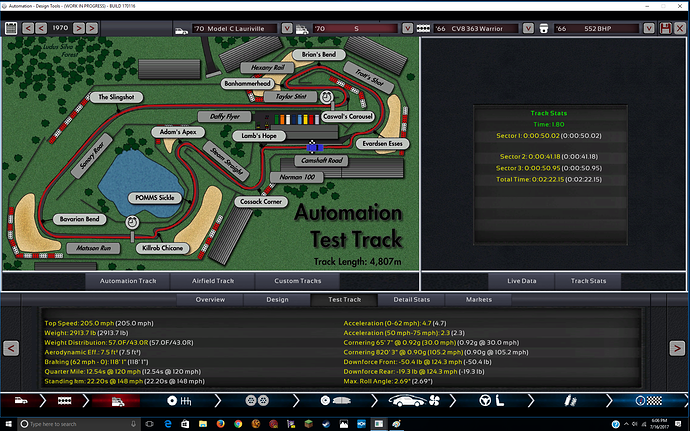 The car had the very first implementation of a personal air supply unit. This allowed the car to race beyond 200 mph while the engine would remain at a very cool temperature. With out the air unit, the car would of blown up.

I mean it’s lit af that your race cars have a fridge and shit, but you’re just going to spill all that delicious beer while driving.

Why would any driver have beer and drive. That’s illegal. The process of buying a Calvinator has a Background check. This is so that you can get a certificate to drive a Calvinator mailed in from CAC. It is ILLEGAL to drive a Calvinator if even CONVICTED of a DUI or even Possession of Drugs/Alcohol in the past. No Calvinators for you @Awildgermanappears. And when I say past, I don’t mean any time frame, I mean AT ALL! Can you imagine what would happen if a Drunk Person drove a Calvinator?

Edit: You have to get the certificate to even buy one, and you have to renew it every 10 years. This was as of 1975.

In what country is this a law?

Also what is the competition that you’re using to say that this is the fastest race car until 1972?

In what country is this a law?

Also what is the competition that you’re using to say that this is the fastest race car until 1972?

The only fucking area in the country where he’s the president of something, his one small ass factory.

No roads are safe

Veer away as soon as possible

Its all part of Calvinator’s History. Oh, and Gasmea first Implemented the Law in 1975, then Fruinia in 1980, then Archana in 1982, then Calva in 1990, the Miaraland Republic in 1995, then the UN in 1999. UN made it required in 2003 that minimum punishment for driving a Calvinator without a Calvinator Certificate is punishable by $1000 fine and/or 6 months Jail Time, and DUI in a Calvinator as 10-30 Years Jail and/or Community Service (Calva is 40 years to Life Sentence or Capitol Punishment because of some crazy anti Calvinator Lobbyists back in 1991, you can thank them for that).

Lmao what the fuck country is this

It’s the fastest car to die out on you, mind you

It will win on that

There would really be no difference if a sober person was driving. Because surprisingly, a 7000lbs, 2000+hp car is really hard to drive. Who knew? And besides its not as if anyone could afford it.