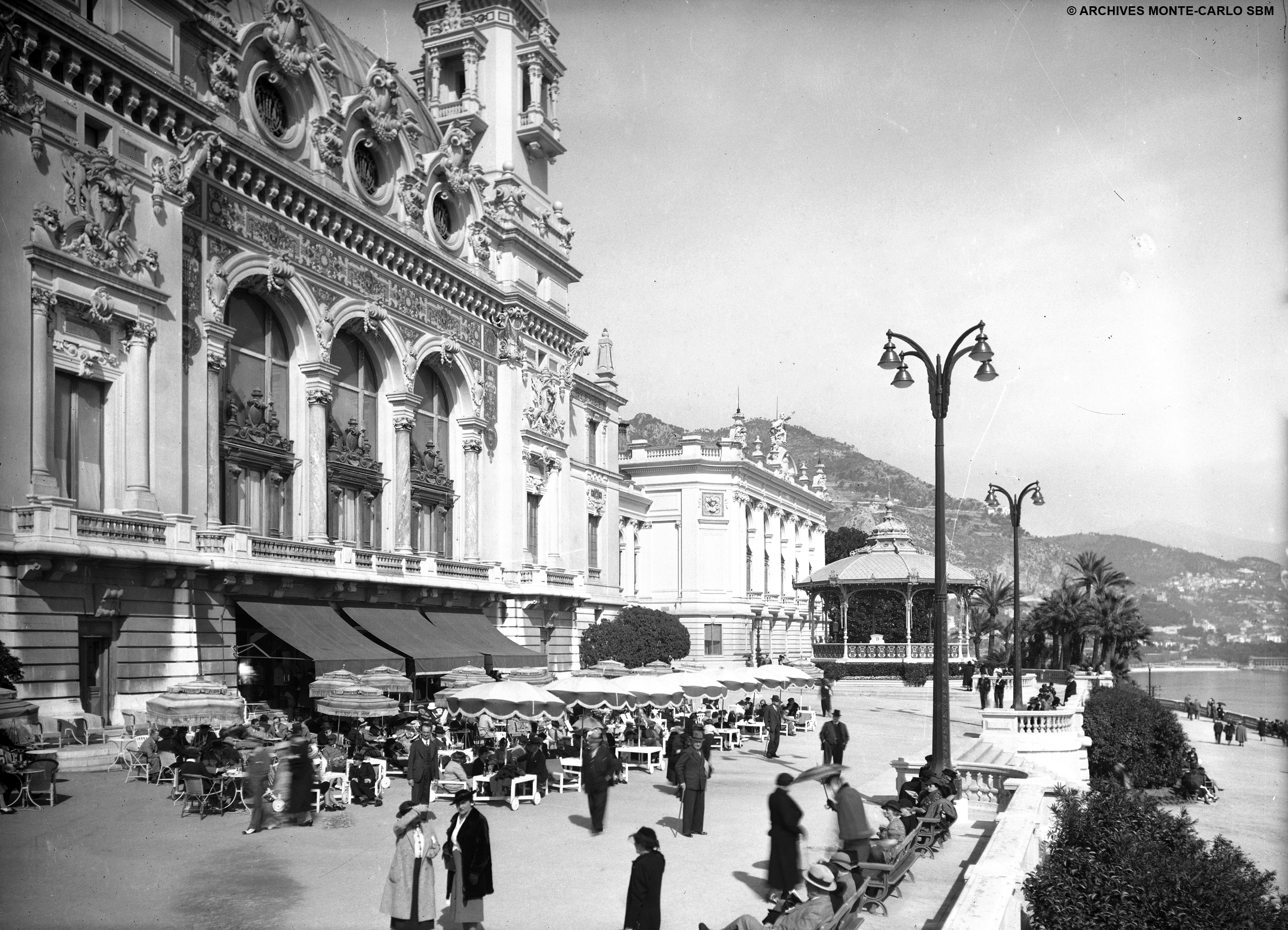 Lady Miette Lucidoux III is searching for sporty coupe for her “roommate” and best friend Gwen Harkness, inspired by her comments on the beautiful machines they saw while vacationing in the Cote d’Azure region of Europe. This coupe needs to breath excitement into their European tours and can possibly be used for alcohol running in the wake of prohibition.

Cars must be built in Automation LCV4.2 / UE4.27, any 4.24 entries will not work and will automatically not qualify.

Model/Trim and Family/Variant year: 1946(aka the start of the game.)

Coupe bodies only (no convertibles).

Must have at least 1 muffler

Must have a form of solid axel for rear suspension. (This is for period correctness and advanced trim settings let you make the ride height reasonable).

Body year must be from 1938 or earlier (Yes this is before the game starts so necessitates the use of mods for entry. Mods are free, so use them).

45 points to distribute in sandbox trim techpool. (These will allow your brand to specialize in different areas to make it stand out. No techpool values are allowed to be negative and must add up to the total number of points allowed. Any more than that is binworthy)

An interior is required for this challenge. There are plenty of vanilla and mod interior pieces for you to use and it’s a good skill to have for building cohesive cars.

– Aesthetics/Exterior Design: Lady Miette is after a coach built masterpiece for her partner and that means a detailed, well thought out, and somewhat trendy design. Elegant, flowing bodies of the streamlined era will do well here, though slightly more formal shapes with aggressive racing heritage can as well. The inspiration pictures and comments from the two girls along side them should help you pinpoint their preferred styles.

– Comfort: Fully aware of how a comfortable luxury train ride would be direct competition to their market, car makers of this era certainly understood how to cater to discerning bums and ears of the elite. And while Gwen might be able to handle the glorified lawn chairs and buggy seats of lesser offerings, Lady Miette cannot.

– Sportiness: Only statistics such as top speed & acceleration as well as lateral G-forces will be judged here since the game will not let such old cars realistically score a sportiness value. These values will also probably be a lot slower than you’re used to if you’re being period correct.

– Realism & Lore: Lady Miette won’t think twice about passing over a manufacturer without an appropriate pedigree, so lore is a must. It helps sell the realism of your car and can explain more interesting choices. Realism is key here, since you’re playing with a box of tools roughly 10 years ahead of what engineers in the late '30s would have to play with. If you’re not sure about what is era appropriate, do your research. Places like Carfolio.com, Wikipedia, and both the Audrain Museum network’s and Jay Leno’s YouTube channels are a treasure trove of info.

– Presentation: The most beautiful car with the most bland presentation is likely to be overlooked by the girls in comparison to one with a more eye-catching display. This is the era that coined “a picture is worth a thousand words”, so make sure the ones yours are saying aren’t dull.

– Interior: While neither Lady Miette or Gwen are expecting palace of Versailles levels of opulence, but they don’t want something that’s model t basic either. Wood, leather, polished metal are all in in this era, as well as aviation and art deco influences. Research will be your friend here.

– Smoothness and quietness: Odd values to weight so highly to be sure, but era appropriate ones. One of the big focuses of luxury cars of the era were whisper quiet, ultra smooth engines (think Rolls Royce Wraith and Cadillac 16)

– Drivability: While Lady Miette may be used to jetting about on her private estate with its manicured roads, Gwen isn’t always as lucky. Rough cobblestone roads as well as rutted dirt trails necessitate a car that is easy to pilot as well as pretty.

– Prestige: Having the backing of a prestigious brand known for it’s top quality driver experience and craftsmanship beats having one that doesn’t. Lady Miette knows her stuff when it comes to the finer things in life and can sniff out dodgy quality.

– Reliability: Gwen and Lady Miette do plan on taking extended trips in this car fairly often, so not having to get their hands dirty on the side of the road is a plus.

– Fuel Economy: While Lady Miette may be rich and not even have to think about things such as miles per gallon, Gwen is not as lucky. She also doesn’t like having to stop constantly while she has booze in the trunk.

– Safety: Cars of this era weren’t exactly known for being safe, but when you’re aiming for speeds over 100 mph, it should at least be a consideration.

– Practicality: As long as the trunk can fit two weekend suitcases, the girls will be happy. Space for a full sized spare tyre is a must as well.(The statistic itself will not be judged, it will be based upon cargo & passenger volume, as well as the visual possibility of said items being stowed either in the trunk or other compartments. possible bonus realism and lore points for designing custom luggage.)

– Service Costs: Elite sportscars will always come with exorbitant service requirements, not all of which Gwen can do herself. When she does have to have a professional look at it, She doesn’t want to have to rely on Lady Miette’s coffers to do so.

-Your forum post/car ad in this thread.


Please DM me your .car file through the forums in this format:

WARNING : This challenge is being hosted on LCV 4.2 (the open beta branch), which has been going through occasional patches that mess with stats of cars. Keep this in mind when entering. As for all the challenges I host, you are allowed to resubmit as many times as you need to until the deadline of the challenge. After the deadline passes, you can no longer resubmit, so make sure any new patches haven’t screwed you over.

Must be a form of solid axel on both axels.

I take that as “solid axle front and rear suspension”.

Model/Trim and Family/Variant year: 1946(aka the start of the game.)

This makes this CSR the first (simulated) pre-war (specifically, pre-WW2) round ever - uncharted territory for you and any entrants.

Yes that means solid axel for front and rear suspension. And as for it being uncharted territory, in terms of doing a challenge and working within the realm of automation, yes it is uncharted territory for me. Out side of that though, I do have a fairly decent knowledge base of the era. Otherwise I wouldn’t be tackling something like this in a CSR round. X3

In order to avoid using fixtures for an entire body, is it possible to make something reminiscent of a Skoda 935 dynamic using the bug 1944 body? the 935 is from 1935. 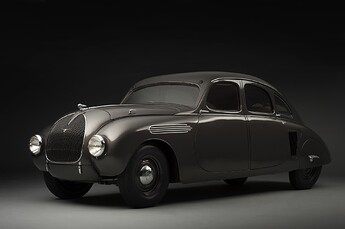 I’m conflicted on the ET limits work, while normally an ET limit of around 120 seems very sensible, after trying to follow the rules as closely as possible with the use of the sandbox techpool, I have an engine with an ET of 54, would there be anything against spamming quality to use more of the ET limit? Or is there something I’m doing wrong.

I really love the idea of making prewar cars, but due to Automations lack of support I struggle to really confirm what I’m doing is period correct or adhering to the comp rules.

also any preference on gearbox type

I’m assuming manual only (automatic transmissions are not available in 1946 in-game).

they are with techpools, but it wouldn’t be the biggest surprise if that broke period accuracy rules

1930s bodies are all mods.
You need to find them in Steam Workshop and subscribe to them

To be honest, I love the idea but…

We are more or less stuck with either the Model A or the Bugatti bodies for this. But for the 1935-38 era, the Model A is too old fashioned. That leaves us with more or less one body that is usable, and without some hefty 3D work, standing out from the crowd will be a hard thing to pull off. The Bugatti has a very distinct look to it that hardly represents a “normal” car of the era and making one not look like the inspiration source will not be easy.

In my opinion this is really a shame since I love the 30s maybe more than any other era of the automobile when it comes to styling, but since I (like most people on this board, I would guess) am by no means a master in building stuff completely from scratch out of 3D fixtures, I will have to skip this round I think. And unfortunately, I doubt that I will be the only one.

Must be a form of solid axel on both axels. (This is for period correctness and advanced trim settings let you make the ride height reasonable).

From wiki -
The double wishbone suspension was introduced in the 1930s. French car maker Citroën began using it in their 1934 Rosalie and Traction Avant models. Packard Motor Car Company of Detroit, Michigan, used it on the Packard One-Twenty from 1935,[1] and advertised it as a safety feature.

Also, is the price from the “Detail Stats” tab?

Also the '34-'38 Mercedes-Benz 540 K series had double wishbone in front and swing axle with Trailing Arm in the rear as far as I know. The Merc referenced in the brief is from 1930, so it’s older - that model was dual solid.

Solid axles at both end would likely be the most common setup, but by '38 you could find all kinds of experimentations and configs in every markets.

Updated suspension rule to account for the surprising amount of independent suspension usage in the late '30s. This should also make FWD cars easier to make if that’s your prerogative. Also moved the challenge deadline out one week for the modders that have expressed interest in making more bodies for the era.

Also pulled the fuel octane rating down to 92 RON leaded, since apparently 1930s gas wasn’t quite as potent as it is now.

damn might actually enter if all solid isnt a rule 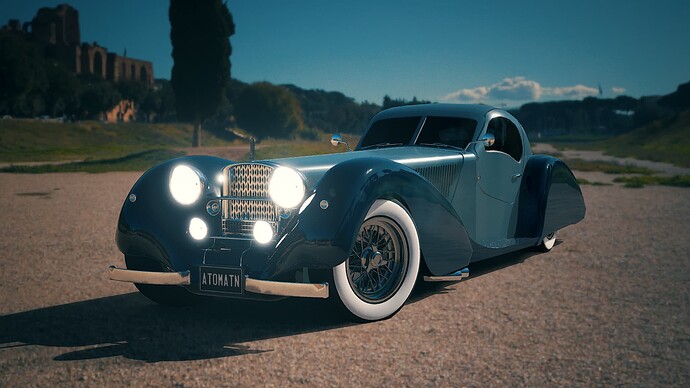 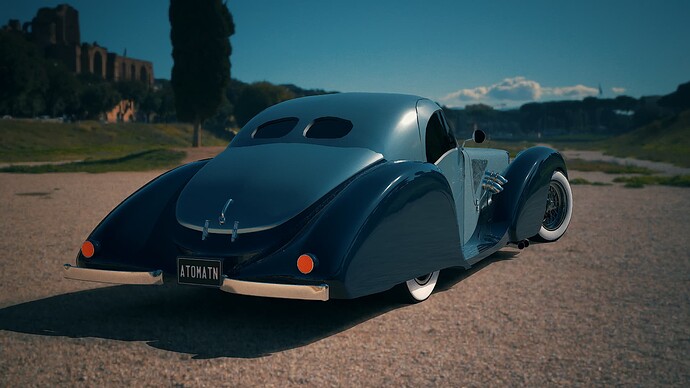 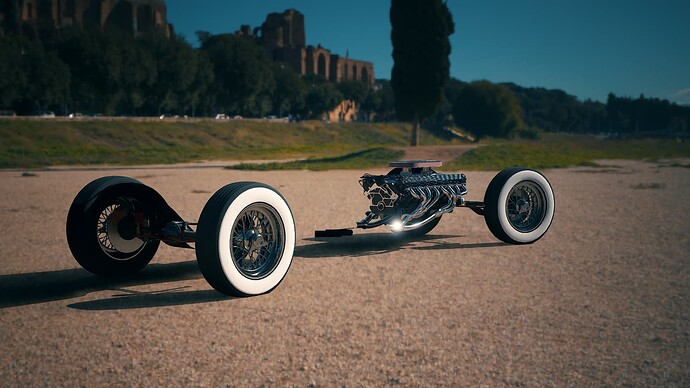 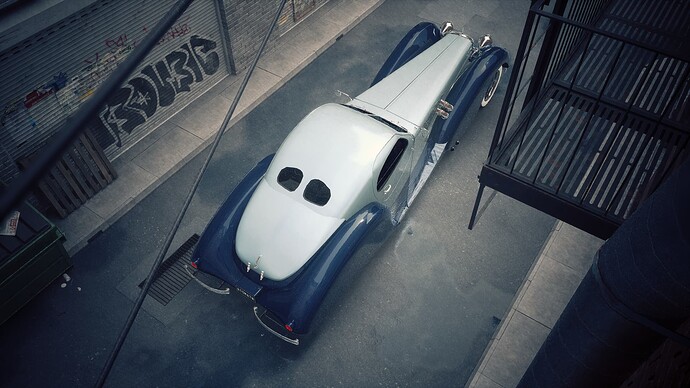 12litres of V16, a whole cabin of leather, hand crafted bodywork.
It doesn’t get classier than this.

12litres of V16, a whole cabin of leather, hand crafted bodywork.
It doesn’t get classier than this.

If that isn’t enough to elevate this beast to the top of the final rankings, I don’t know what is.