ok so quite a simple little exercise. I would like to see peoples salt flat racers
Track is here
http://discourse.automationgame.com//automationdiscourseuploads2.s3-eu-west-2.amazonaws.com/original/2X/d/d1dffc8c8e264d0c7a1a29317bacafb851e33178.zip
Thank you @Tyler who created her
Please just upload screenshots of vehicle information and track time
The one rule I will implement is that each user can only show one car at a time (you can change cars but your old car must be removed from your post) And please when entering a vehicle only post in one page do not create a new post for a new car, rather I would prefer if you edited your original post

Cars must be sell-able in two regions in any category with a 15% markup
Thats it!

Since when do Speedrun cars have to be sellable

yes there are categories in real life for factory presented vehicles that’s what I am replicating here otherwise there would be 10 cars that were all the same and were all one off’s, as Automation is based on factory performance I would like to see realish cars not just a streamlined body with an engine with 0 reliabilty.
Real World Rules
http://www.dlra.org.au/class-car.htm

Pictures of vehicle and stats 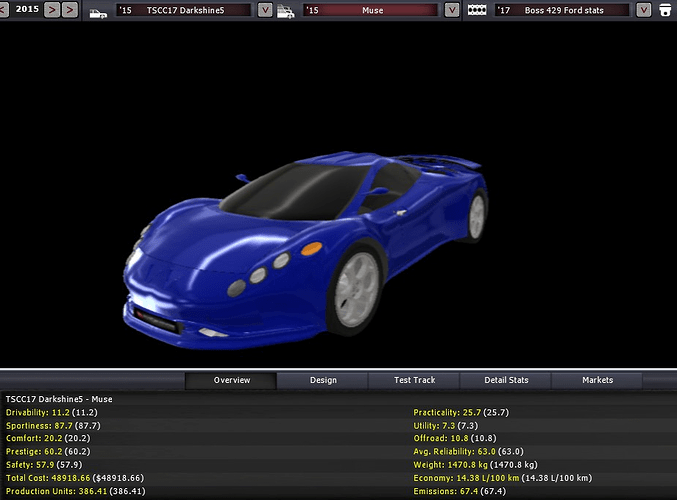 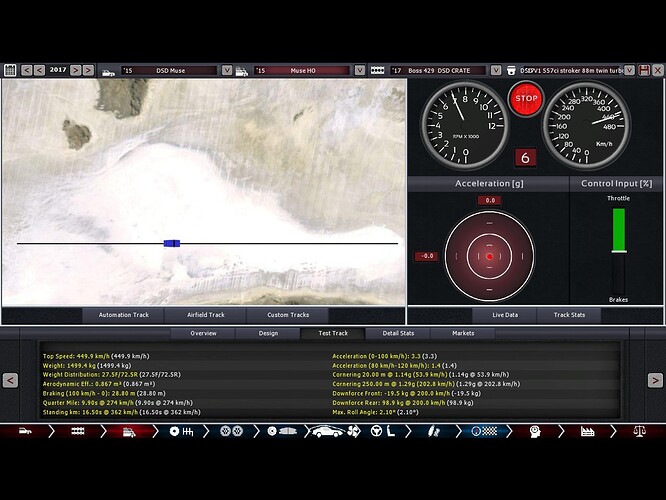 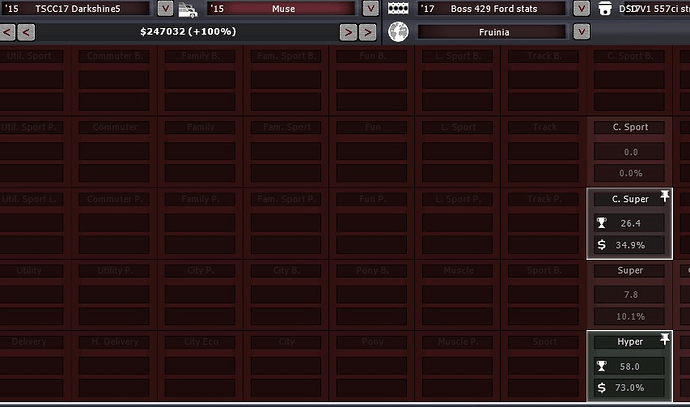 Doesn’t get any more REAL than a random old body-on frame full-size sedan (that has in fact been presented on this forum long before this thread) that has been modified to do speed runs.
Long story short I have slightly modified it to run on pump gas, lost 300hp in th process, had to swap the STOCK 4-speed automatic for a 6MT because the gearing really killed performance and mileage, and even added some weight back in because comfort and shit. Still costs only $30k, but now gets all of 8 mpg and still capable of ~270mph. Is now more than competitive in both Gasmea and Fruinia, and that bit of knowledge is still irrelevant since I don’t intend to mass produce these. 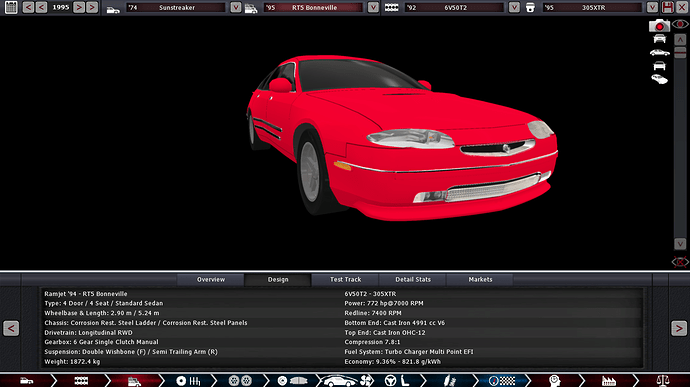 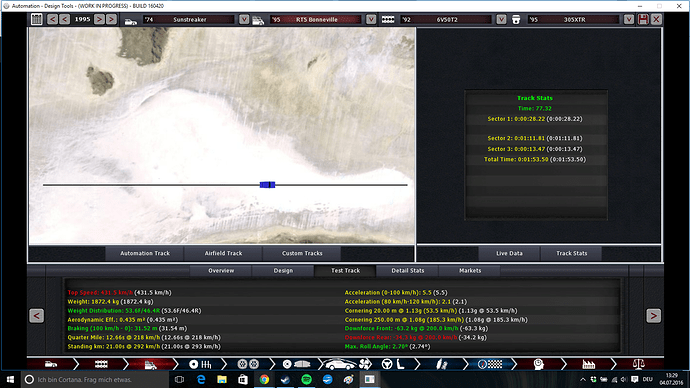 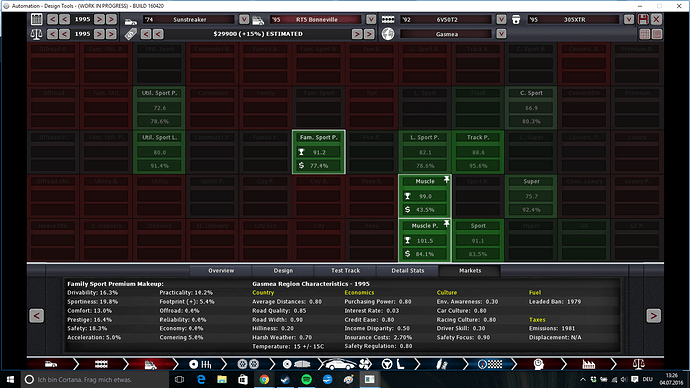 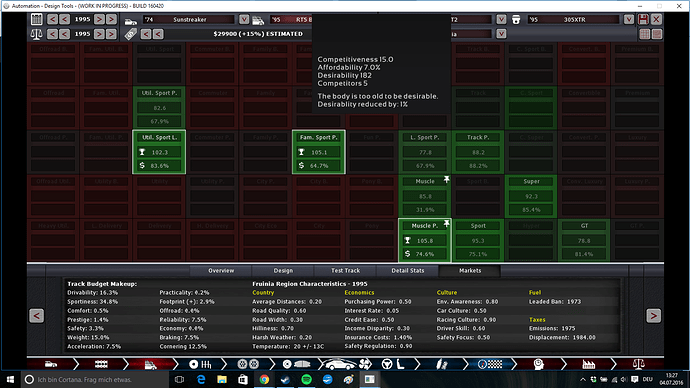 I need to point out that the car is actually called Ramjet as evidenced here.
The game was glitching out when I took the screenshots.

Well, suppose I better get a version of Mercury up in here, what with a top speed of 500km/h and all.

As a tribute to the FZR2000, the fastest car in the greatest NFS of them all, II SE, i give you this: 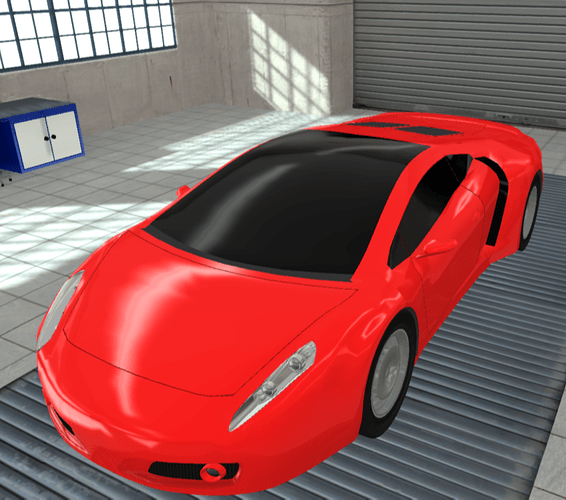 With a top speed of 446.8 achievable before the start of the last mile at Bonneville (I think).

And with no compromise in reliability. (cooling>required) 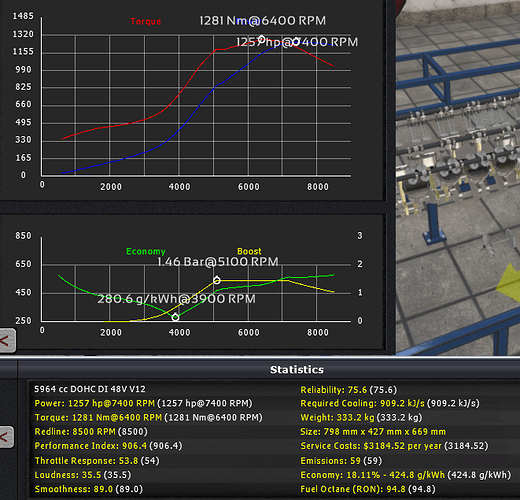 Quite appreciated by the fine people of Gasmea and Fruinia.

As for you, beloved people of Archana, worry not! A Hyper Amish Mobil is being developed by our R&D especially for your needs!

Since I had a suitable body and engine ready, I thought lets put some turbos on it and lets see.

The Revera Racing Department (RRD) was put on the task to build a car that will break straight line records. Based on the existing Revera R1, they boltet two big turbos on, stripped all the unnessary stuff from the car and modified the body of the car to make it a slippery as possible. The result: 1950hp, a top speed of over 540km/h and absolutely undrivable. Limited to five cars only. 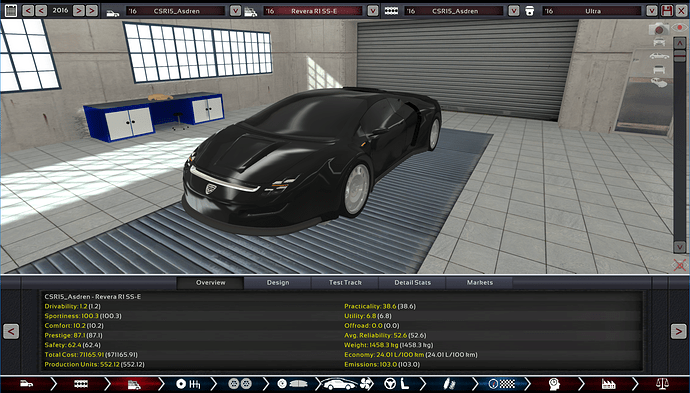 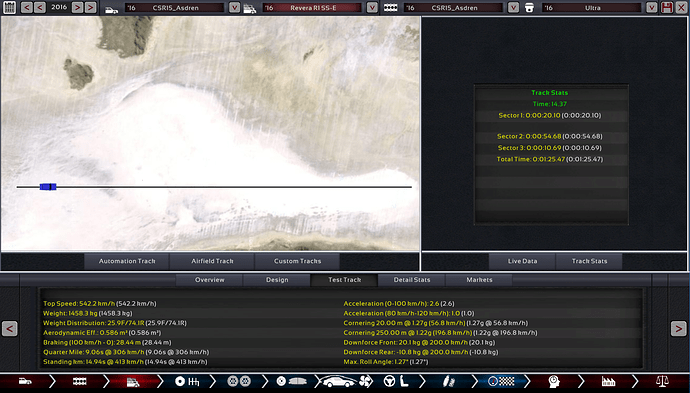 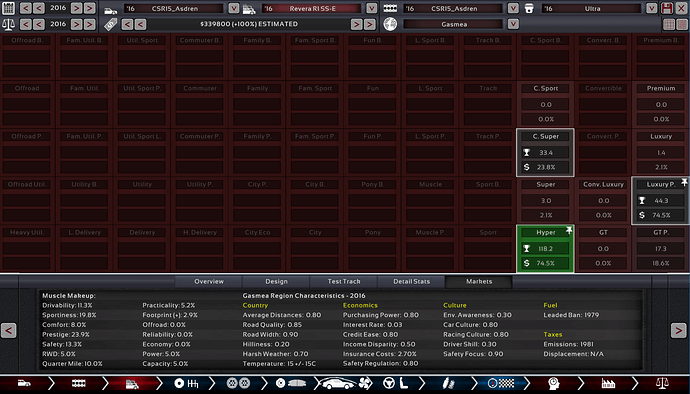 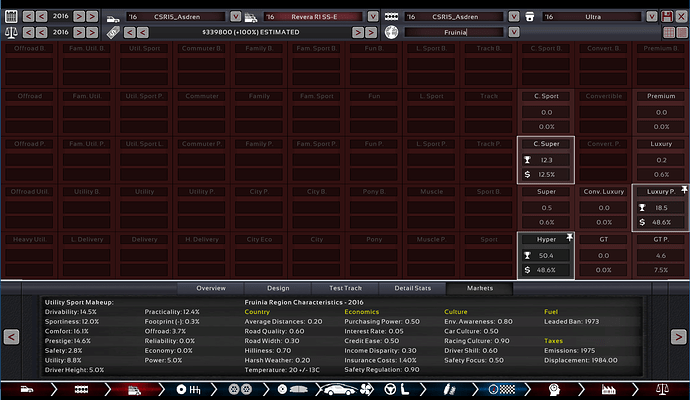 Edit: Damn, I forgot to remove that front splitter

. Nontheless should be fine for now. 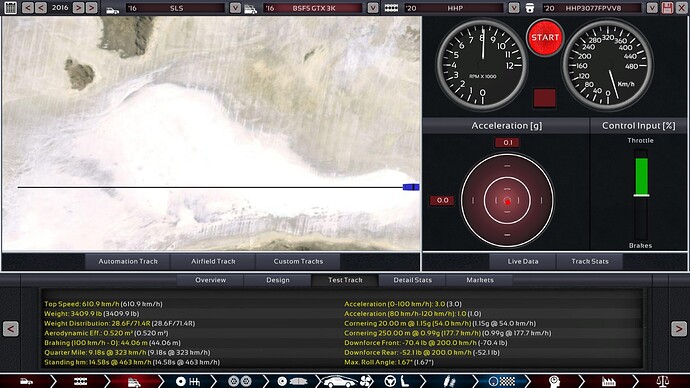 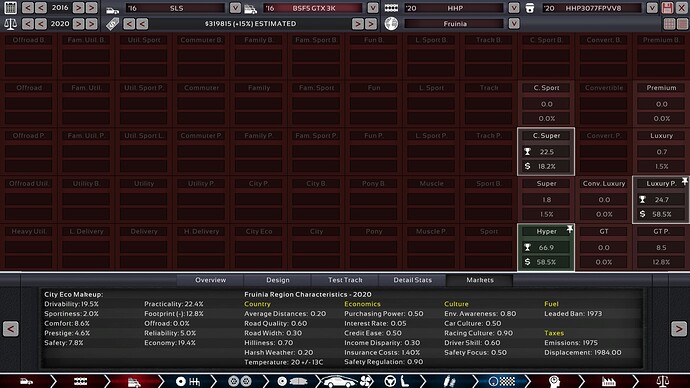 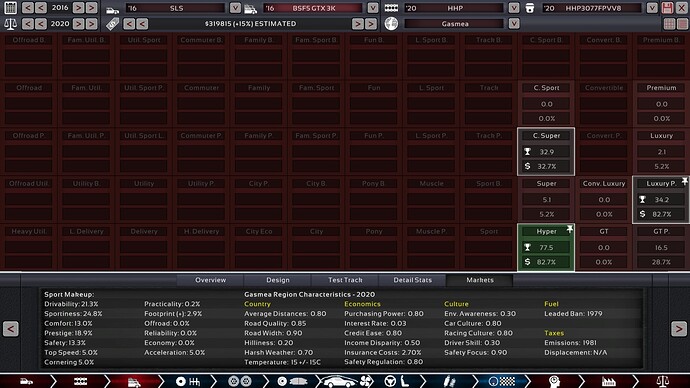 Hmm… I knew things would become very competitive really fast, but I was hoping in smaller increments in top speeds, just for the fun of building a somehow balanced very fast car. now, with speed already in the range of 550+ kph there is no choice but to build land missiles

well since there is interest when we get to the point where we cannot get any faster. I will then implement a class rule ie: top ten list for fastest 60’s cars etc 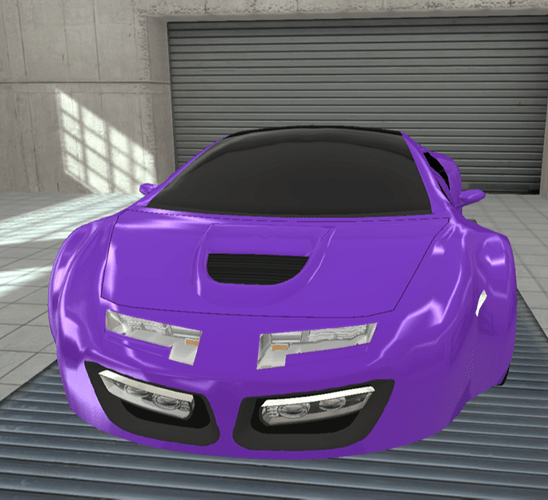 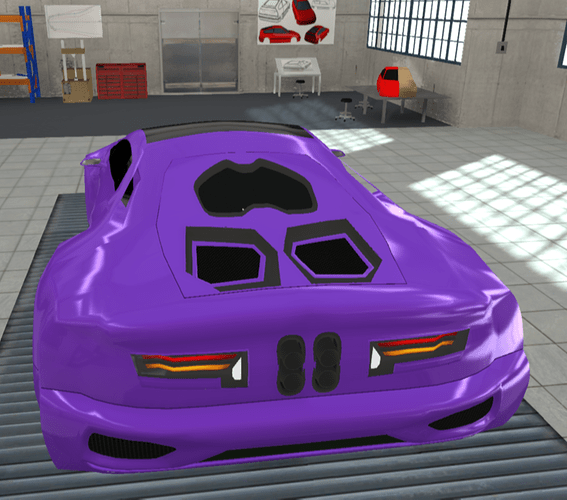 Thankfully there are still a few crazy people in Gasmea and Fruinia willing to buy it.

I updated my post. It’s a redesigned land missile capable of 572.9 km/h.

@Darkshine5 Friendly reminder that you should update the list.

updated thanks I had missed these

I’m curious as to how people are using those bodies to get those speeds. My impression was their drag values were much higher. Even running quite hot may not be enough to explain it.

Active cooling plays an important part + running around minimum required cooling. But from a simulation point of view I was thinking the same thing. That kind of speed shouldn’t realistically be possible with only 2200 hp and that big of a body. And the thing is, there’s actually quite a bit of room for improvements.

Let’s see… so with 2713hp and some moderately heavy slider abuse I can get up to 614km/h… woah… Why did I not play with this body sooner? Might be to do with the inability to customise the side vents…

And that’s precisely why I reworked the Vector W16 for a new top speed of 588.3 kph, before someone like yourself comes around here and ends the party :))