This challenge is a recurring continuous challenge. There are no competition points and each round allows a total of 16 entrants.
The overall CHAMPION is decided simply by who has currently won the most total amounts of rounds.

The specifications for each championship will be allocated by the winner of the previous round, the Racemaster will then take a max of 16 entries which will face off in a elimination series of races over the tracks selected distance.
A small write-up on all competitors and their strong or weak points and how close to the round brief each vehicle was as well as the vehicles fastest overall time (the time the car runs down the designated track with no penalties) time will be provided by the Racemaster. From these reviews the previous round champion picks their favorite car to become the CHAMPIONS PICK. The Champions Pick allows the winner to change/remove or add 1 of the regulations of the next round.
The Car with the fastest overall time is the Breakout Champion The Breakout Champion picks the track for the next round.

The winner of each round will be crowned CHAMPION for the round and will win the privilege of selection the next championships rules/specifications. If a single user wins a hat trick (3 in a row) on their third win they will not be able to select the rule set for the next round, that duty will go to the race master.

A track and distance must be selected for each round by the Breakout Champion and displayed in the rules for each round.
(tracks can be found at the bottom of this page)

How the racing system works.

The Racemaster will use the time the car runs on the nominated track.

A number will be allocated to each entrants car as it is received by the Racemaster in a PM from the Challenge host ( ie. the first car received would be number 1 the second car number 2 and so on)

WARNING TRACKS DO EFFECT TIME AND THE CHALLENGE REQUIRES A LOT OF LUCK AND IN MOST CASES THE FASTEST CAR ON PAPER MAY NOT ALWAYS FINISH FIRST.

Now a few ground rules that must be followed

CARS MUST BE NAMED IN THE FOLLOWING MANNER

Send your export files to the Racemaster

If anyone is uncertain of the rules please contact the Challenge Host or Race Master so they can clarify and avoid any misunderstandings.

PLAIN DRAGSTRIP
Dragstrip.zip (17.4 KB)
as provided by @glordak many thanks

SWANSON PROVING GROUNDS
1/4, 1/2 Mile
http://discourse.automationgame.com//automationdiscourseuploads2.s3-eu-west-2.amazonaws.com/original/2X/f/f424cbcada49f752d4a63f8a2c1eab3070aed8e5.zip thanks to @07CobaltGirl for creating her

The challenge Host reserves the right to change Basic Ground Rules and Racing system rules at time. However any changes will be implemented after the current round.

: @Darkshine5
The Challenge Host is me and this will not change. I am the person who writes the Overall rules, excepts the export files, scrutinizes entries, manages this page, settles disputes that may pop up from time to time, I am the Racemaster’s “Boss” recruiting/monitoring/advising/and firing if need be (this would only happen if the greater community has come to the conclusion that the job is not being carried in the spirit of fair competition. However I reserve the right to hand out discipline in the cases of racist/sexist/derogatory towards a individual in any way because of who they are not how they are behaving)
And most important of all I created the DRC.

Racemaster @JohnWaldock
The Racemaster position is voluntary!
The Racemaster is the person who runs the races, writes the blogs, discusses the next round Rules with the Champion and Champions Pick, and handles questions about the rules and results.
[ It requires a lot of time and patience as well as linguistic skills, some math ability, and a vivid imagination. So please do not expect race results instantly as real life does affect us]
The Position is not permanent but it is completely up to the current a Racemaster as to how long they can/wish to hold the position. A Racemaster can retire only after the current round has been fully completed. If this is the case a new Racemaster will be found before the rules are revealed for the next round. When selecting a new Racemaster I will ask for volunteers willing to do the job (this can be as low as holding just one round the job has no minimum or maximum expected rounds) When you volunteer I will talk with you privately to be certain you are up to the job, I will then ask the greater DRC community if anyone has an objection (this needs to be valid and not just because you do not like someone) If there are no objections or I deem them irrelevant You will have the job. If more than one person volunteers I will put it to a vote which will be conducted in a 48h time span. If there are no volunteers or acceptable volunteers after 96 hrs of the previous Racemaster retiring I will take over the position until it is filled.
The Racemaster can be fired if they are found to not be competent and or are derogotive towards competitors and/or spectators.

Anything stated must be followed, if a topic is not mentioned there are no restrictions on that part/car/cost etc.

EDIT:
I don’t care what body you use, as long as it looks like something around 2017

Nice, I’ll join. Do we have a deadline? 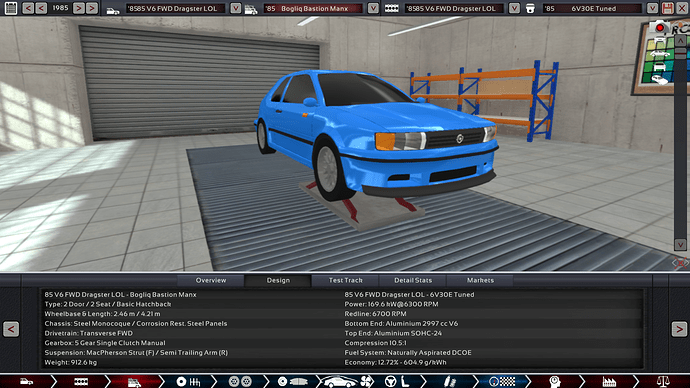 When the first ever FWD drag racing championship was announced for 1985, the CEO of Bogliq Automotive, Max Power, turned to trusted Bogliq tuner, Leeroy Racing, to run the team and prep the cars for competition.

Immanuel Leeroy, knowing that there was no factory FWD Bogliq capable of being competitive within the new rules, built a frankenstein of an entrant using a Bastion front end, kitten chassis and Fox 350R gearbox and diff.

The Bastion front end was required to fit the luxury Bastion 3 litre V6, complete with a brace of DCOE carburettors from an Ungoliant, and the Fox gearbox was used as it was a smooth shifting, LSD equipped, masterpiece designed for transverse applications. The Kitten frame was used as it saved weight in the extraneous areas behind the driver although this resulted in the stunted rear end appearance, thus generating the “Manx” name…

To ensure compliance with any homologation requirements, the Manx was offered as a part of the regular Bastion line-up and it is believed that the cars popularity will be commensurate with its on-track success!

If you gonna daily it, you are going to have baaad time. 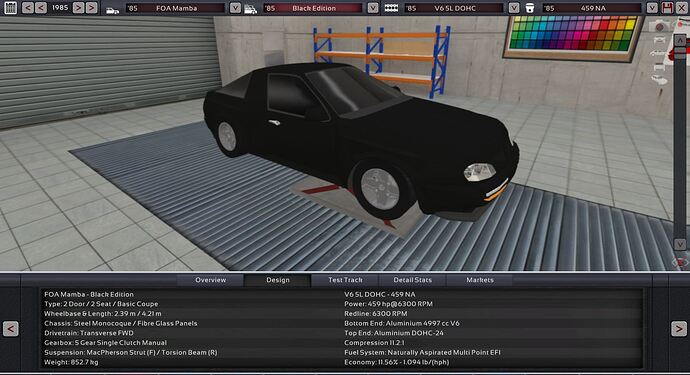 How do I like install the track? Sorry, but I am new. I just wanna get more involved with this game

Download the .zip (track), extract the file (it’s folder that contains .lua file and a picture) into Documents\My Games\Automation\Tracks and run the game.

wait. the 20 contestant quota are already out?

By the way… How do I install stuff from the workshop on steam?

I can not get the workshop to work with the game…

the steam mods are activated, and I have checked the steam folder on my pc and I can see the files finished downloading and everything… 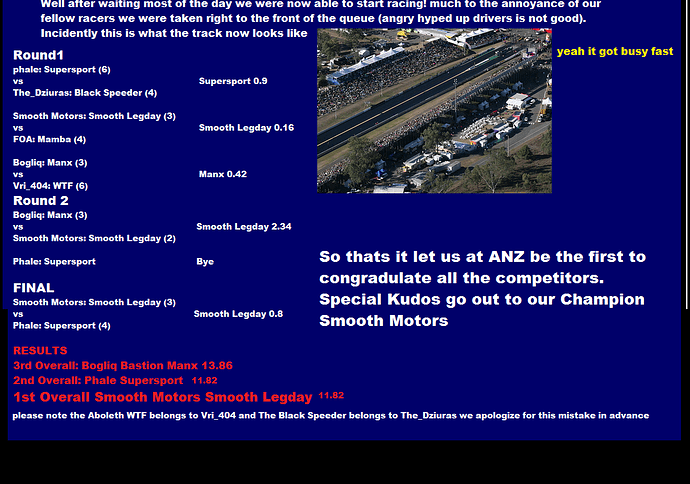 No, I don’t know what I did to my car… It is a monster, and I love the Aboleth

Sweet, third place and my car was used for food runs as well!

Ooh, close one. Very smart of AirJordan to pick that lightweight Miata body… I just wanted to throw in the biggest engine

Awesome! Thanks for putting this much effort in a challenge @Darkshine5.

So is this like shopping round that I get to host a next one (in that case I’m sadly looking for someone willing to tako over) or I have just the honour to propose new rules (I could totally do that)?