I’m in the process to learn 3D Max so be patient with the slow progress optimizing/polishing the stuff published on the workshop, and of course any feedback would be welcome.

I’ve already got some stuff that you could find in the workshop.

@thecarlover here we come, indicators
Although I’m not too keen on requests, this one was reasonable an useful (that’s a must)

PS: probably they will need a little tweak, in curved areas they work so so

Sweet, thanks! I’m not too into requests either, but I know that doing that could be done just by changing some files and .lua coding

Yup, well I’ve resized everything… they were too big for indicators

If I had one suggestion to make, it would be to have at least one in-game picture for all of your submissions.

Your renders look nice but it’s always better to see what it will end up looking like when in game.

Thanks, and thanks for the suggestion. I’ve uploaded some screenshots.

Just wait til you see how the lights have allowed me to refine the future car concept. It looks properly tidy now.

A couple of things:

Once again thanks for your most excellent work, it allows us to push the design envelope even further.

You know I’m looking forward to see that new creation

a.- There should not be any problem, I’ll try to equalize them.

BTW, @titleguy1, Are the fixtures going any better?, I’ve been improving Uvmeshes, even poly count on some the mods. In the next days I’ll look them more in depth.

PS: I’m going to take a brake in this coming days (from today till sunday), have a trip.

Yeah, the fixtures are much better. My only gripe now is that the exhaust vent thing that points up has some funky exhaust shapes.

As a bonus idea, it’d be nice if there were some carbon fiber fixtures too

Great!
About those exhaust… yep, that happens after optimizing them through the modifier. I guess now I could make it in a different way getting a low polygon count, but that one is in the low priority list hehe.
Noted the CF texture

I’ve found the pointing to be useful, but I generally have to morph the exhaust to be as long as it is wide and vice-versa to achieve the desired effect i.e. upwards/downwards pointing instead of to each side. You shall see it when I finally finish my Raz-fixture-inspired concept car! (Had to rebuild it due to breaking in closed beta

The journey so far. 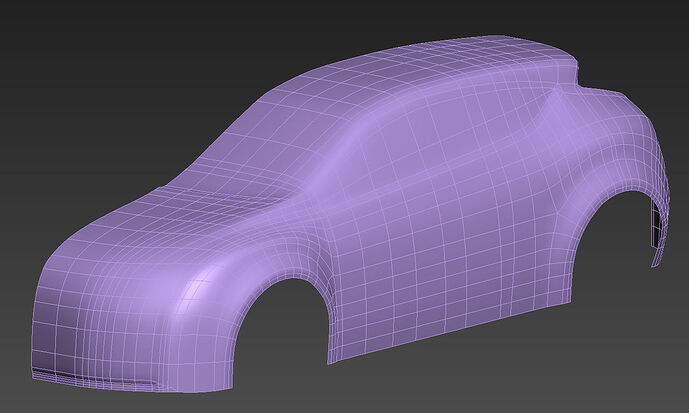 That has to be the smoothest mesh I’ve seen in the forum.

Of all the hatchbacks you could’ve chosen, you chose the one that looks most like a Hyundai i30.

@Sillyworld, I think I had the smoother modifier applied… It looked more like the finished rear end (but I made a mistake and applied it, and didn’t notice till an hour ago, or so

I hope that it not ‘break’ something at the end, fortunately I have around 1000 polygons atm. 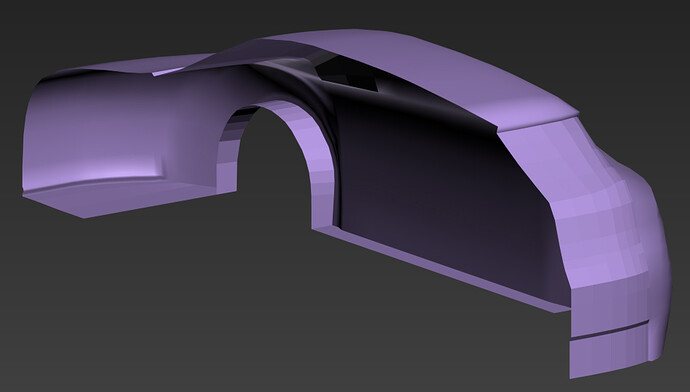 , @Awildgermanappears, and not a Hyundai

I think he was talking about the mesh flow.

And I have to say that it does look pretty awesome, which is fairly important if you want nice looking reflections.

With proper use of smoothing groups so it doesn’t like melted Jello (which sometimes happens if you don’t use smoothing groups to try to separate some surfaces more), I am pretty sure it will look quite nice.

Just make sure to remember that the door seams and windows need to decently blend in the mesh flow.

@TrackpadUser, yep, probably you 're right…, on the reflections, I think it will look ok (if got finished hehe), but I’ve seen a couple of areas where it could be better (but I cannot ask for more). BTW thanks for the tips.
I’ve added the trunk-box, just need the trunk indentation, bones, luas… enough for today!.
Current look.

Ok, I have made bumpers indentations and bonnet, trunk and doors detachment, then created the boxes (bottom box, top box and cargo). Are these boxes mere ‘boxes’?, not talking about their function but if they need some kind of configuration or somewhat.

Which would be the next steps, dummies…? I know that I have to watch this video, but I think that in general a summary would be appreciated (for me and any newbie out there).
Thanks.