Hello fellow automationers. I’m a bit embarrassed to admit that even though I’ve been playing this game since 2018, I have only very recently discovered this forum. I’ve been relatively active on the automation subreddit so some of you may have seen my posts there.

I typically make my cars under 2 brands depending on what my inspiration for the cars are. “SMC” for the more European-style cars, often inspired by brands such as Ferrari, Aston Martin, Mercedes-Benz, Volkswagen, Renault etc., and “Akira” for the Asian-style inspired by Asian brands such as Toyota, Lexus, Honda, Kia/Hyundai and very recently, Lynk & Co/Geely. But I don’t follow this strictly, as some cars contradict how I decide to brand them. There’s also an occasional random brand for cars that don’t quite fit in with those.

To start off this design studio, we’ll be taking a look at 5 designs that were at some considered my favourite, from oldest to most recent. You’ve probably seen most of these on the subreddit already, or at least older versions that have since been improved upon.

The SMC Eterea GTS
This is one of my older designs, before I decided on branding, but I’m still super proud of it. It was meant to be a front engine V10 supercar inspired mainly by the Lexus LFA. 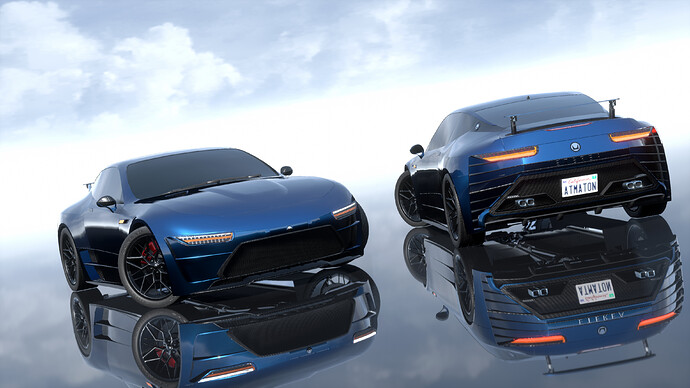 1998 SMC CT R
This one would’ve been an Akira, but I hadn’t come up with that brand when this was made. I tried to make a similar car that was supposed to be a competitor from Akira, but it just wasn’t as good. 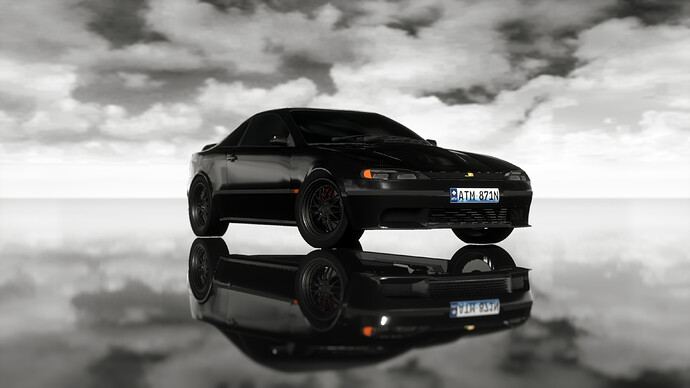 The SMC Atrani GT
GT cars are my favourite style of car. The idea behind this one was to make a modern GT car that’s relatively affordable. It’ started off as my attempt to create something similar to the Ferrari Roma and Aston Martin Vanquish, but ended up looking more like a Supra. 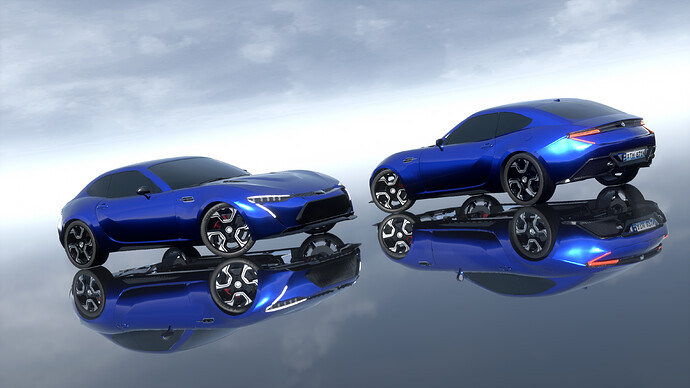 The SMC Ultima
Since I started playing Automation, I’ve repeatedly tried making mid-engine supercars, but I was never quite good at them. This car, however, I thought was good enough to finally show off. It started off using the same design language as the Eterea but it didn’t quite work as a mid-engined supercar, so I made it distinct from that design, while still having similar cues. I don’t really know what I can say is the definite inspiration. 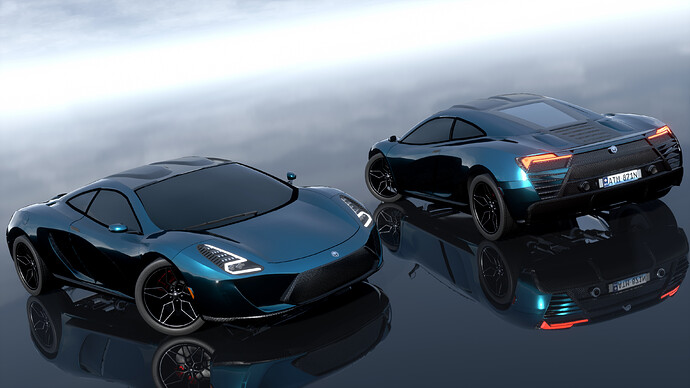 And something from Akira:
Akira Metro SR
The inspiration behind this one is quite obvious. I wanted to try something different with this car and it’s probably my favourite one since I started playing. 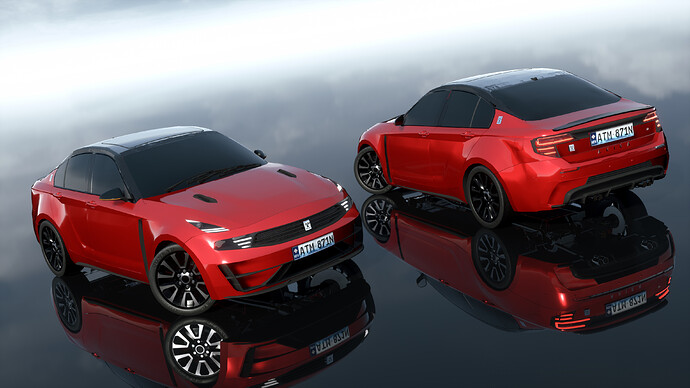 I’d love to know some of your thoughts on these designs. Compliments and critiques are all welcome. I won’t really be changing these designs, because most of them have been around for months (and one of them for over a year) and I’d rather start new stuff from scratch. But your thoughts on what I can improve on and what I already do well would be amazing!

To be blunt, all five of your car designs shown in the OP actually do not suck at all. However, the Metro definitely does not need what appears to be a second pair of headlights above the main lenses. That’s my only gripe, though, as far as I am aware.

Overall, this seems like a good start, so keep it up and you’re bound to improve sooner or later. 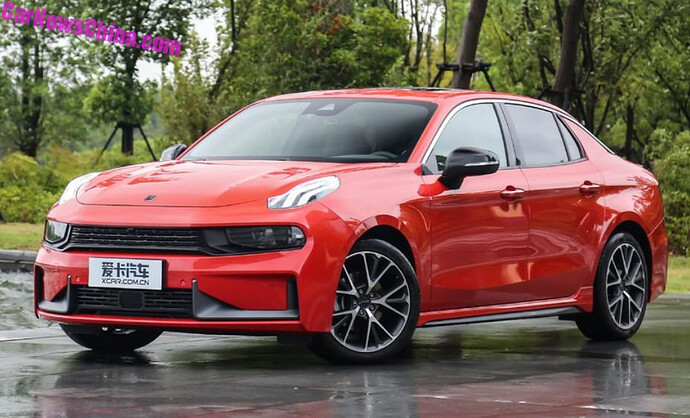 However, the Metro definitely does not need what appears to be a second pair of headlights above the main lenses

The Metro seems to be very strongly based off the Lynk & Co 03 which is a pretty controversial design on its own so it’s fair that opinions may be polarized on its light setup.

Your cars are pretty solid! Keep it up!

Welcome on the forum. One thing you should know is that we like to know more and see more of the cars - especially such nice ones as these

Some good looking cars for sure. I specially liked the Ultima. You’re welcome to build some under the SLRR brands, I’ll add them to this topic if you so desire.

Whatever it is you’re doing, keep doing it. The lights on the Ultima and Metro SR are my favorites. Well done.

Thanks! Honestly I have thought about removing the second pair, but I do really like how quirky the Lynk & Co 03 is and I wanted to channel some of that energy.

looks good! I like the SMC Ultima, those headlight must takes you ages to make, good job

From the SMC Heritage Museum

In 1960, SMC sold what is probably the most iconic car in their history. The company wanted to prove that it can create a car that is luxurious, stylish and engaging to drive, so that SMC can establish itself as a premium brand. 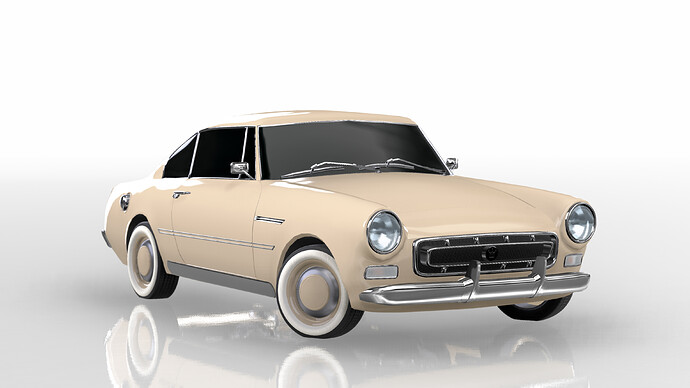 The Arezzo was small, with just a 2.2m wheelbase, and it weighed in at just over 1090kg. The engine was a new, although quite expensive to develop 24 valve, SOHC 3.0l Boxer 6 producing 152kw (206PS/204bhp). Power was sent through a 4 speed manual gearbox (Although there were some limited models with an experimental 3 speed automatic) to the rear wheels. 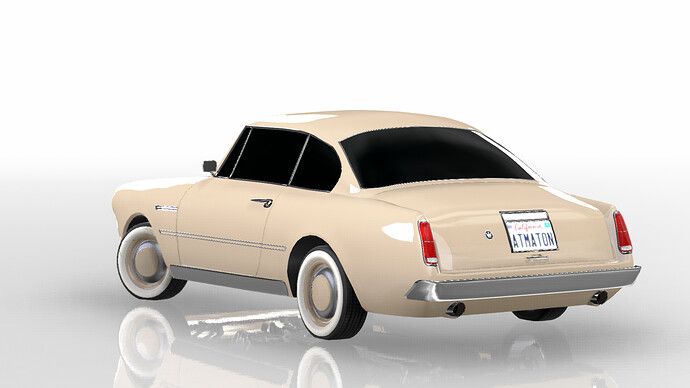 SMC also used this car to experiment with all-round disc brakes, all round double wishbone suspension, and Hydraulic Power Steering. in 1963, a convertible model was released, dubbed the “Arezzo Aperta”.

The Arezzo set a standard for sportiness, comfort and style that all SMC models since have had to meet, a standard so high, that it more often than not resulted in vehicle development going over-budget, and the cars significantly more expensive than the competition.

The story of Akira and Solana

Back in the Mid 80s, Akira was looking to enter the premium car market. Akira cars, while dependable and and well built, did not appeal to buyers looking for premium/upmarket vehicles. Around the same time, premium car maker Solana was performing poorly and was close to bankruptcy. Akira saw this as an opportunity to break in to the premium/luxury car market, and purchased the Solana brand, factories and patents.

Because the Solana cars were expensive to produce and not selling well, Akira scrapped production of all Solana models, and instead took existing Akira models, modified them to have premium interiors and technologies, and sold them under the “Solana” brand. The cars would remain mechanically, and, save for some slight exterior modifications, visually almost identical.

This strategy seemed to attract some premium buyers, particularly existing Akira buyers that were buying up. While the Solana models were selling in acceptable quantities, it was determined that premium buyers were put off by Solana branded cars just being rebadged Akiras with leather wrapped interiors. Akira had also started to make the shift to make their regular models more premium, thus negating the need for the Solana brand. Akira decided to retire the Solana brand after 2006, and instead, turn “Solana” in to the designation for the most luxurious trim of a given model, but this strategy did not seem to help sales in the premium segment either. The “Solana” name disappeared altogether in 2008.

In 2015, Akira announced that it had created a semi-independent subsidiary to design and build cars for the Premium and Luxury segment. “Akira-Solana” was born, and they would use existing Akira technology, engines etc., but have complete control over the design, manufacturing and sales of vehicles. These cars will be sold under the Akira brand, and will be sold at Akira Dealerships. Buyers would get unique experiences, with some dealerships even having separate sections set out just for the premium cars. 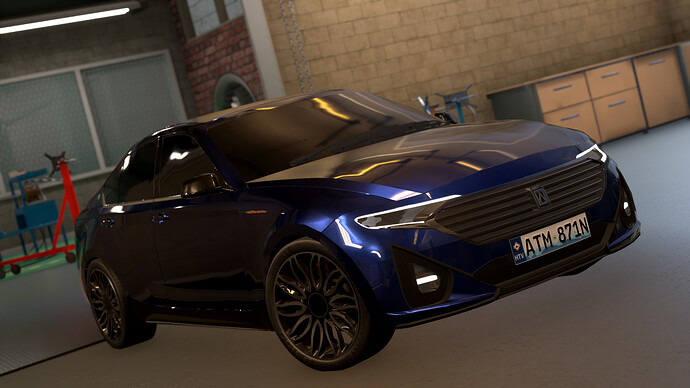 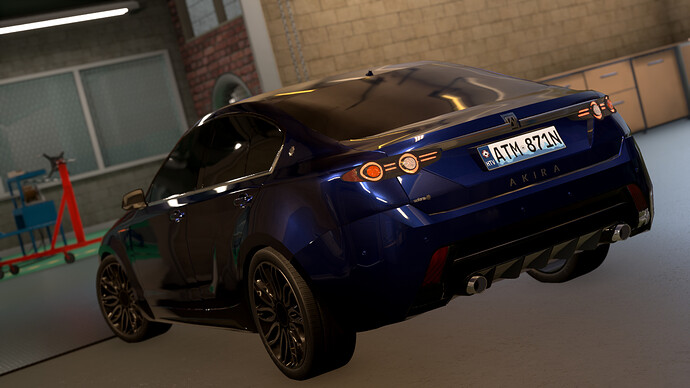 This would be a nice answer to the question: “What if the current Mazda 6/Atenza were a rear-drive premium sports sedan in the mould of the BMW 3/4-Series, complete with high-performance trims à la M3/4?” Come to think of it, a detuned version of the V6 in the Pro trim would be ideal for a high-end trim between it and the G3 S.

Yeah, throw in a little bit of Lexus in there and it pretty much summarises how this car came about.

The detuned V6 is a great idea. I’ll definitely try to make that trim level.

My first attempt at making an open convertible and interior. I can’t wait for the next automation update which will make this so much easier. 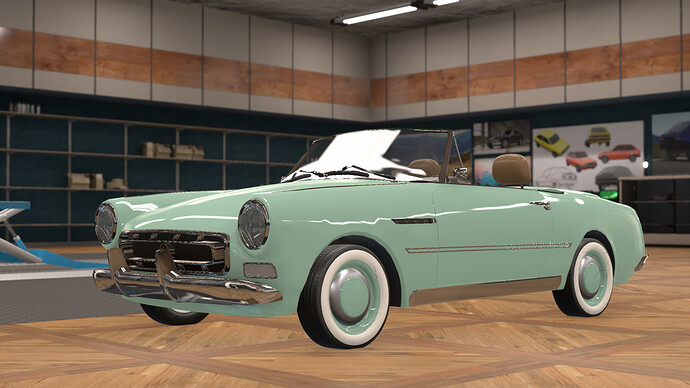 It’s not perfect, I couldn’t get the rear view mirror in, and some bits were clipping. out of the body. These angles helped hide the flaws. 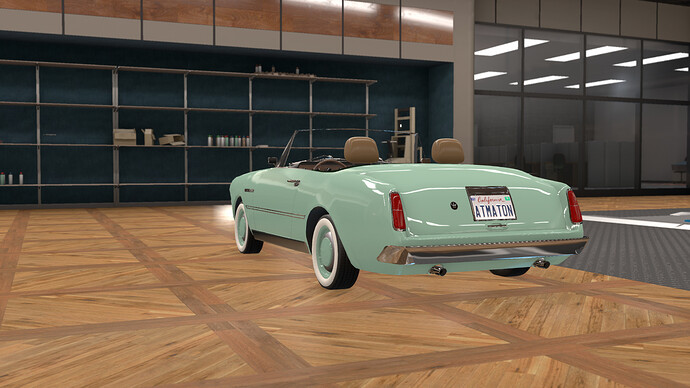 And because I thought this looked cool: 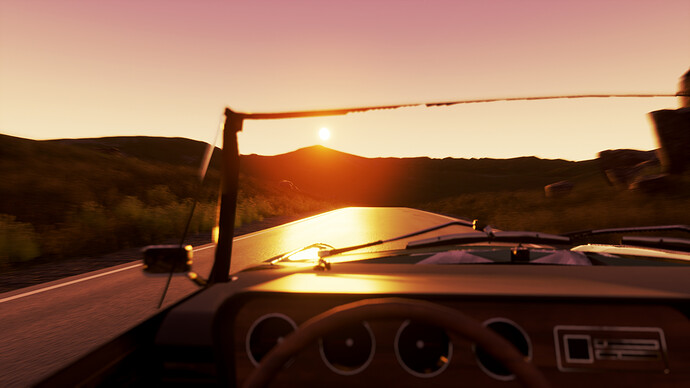 This luxury sedan was designed to be the flagship model of the Solana range. However, its expensive development and high retail price meant that it never sold well enough. By 1986, Solana was purchased by Akira, and the existing range of Solana models were scrapped in 1989. 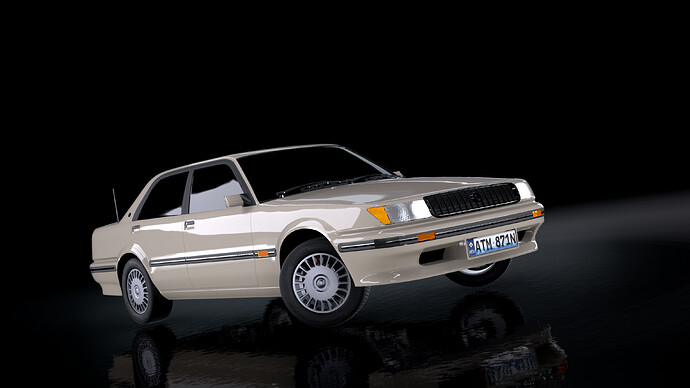 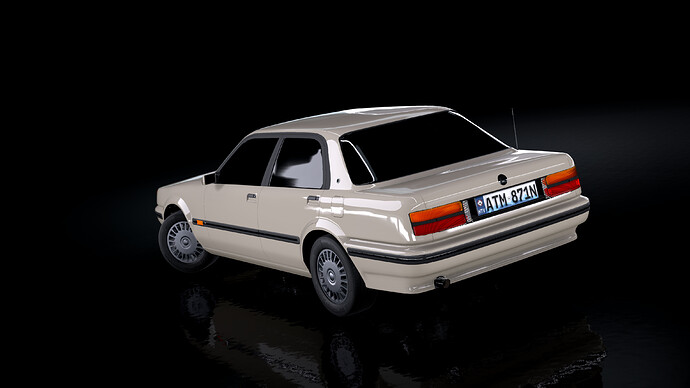 Yo!
Love the super modern design, and the mazda-esque rear lights.
Would you be interested in me making a track-attack variant?
Here’s a few of my designs (Race Cars (Sharing, Commissions..) Suggest your own cars!) if you want to make up your mind.

Be sure to let me know man!

Thanks! I’ve actually thought about a track version (and I’m not very good at those) so this actually sounds like a great idea!

I’ve actually made some significant changes to the car since the original post, but I’m happy to share both (pre-change and post-change) versions with you on your thread, and you can choose whichever one you’d like to work with.

That sounds great! Do share on my thread, we can discuss the details there

Special thanks to @matisse.msknt for making this awesome race version of the G3, though I corrected the tail light design and made some small tweaks. 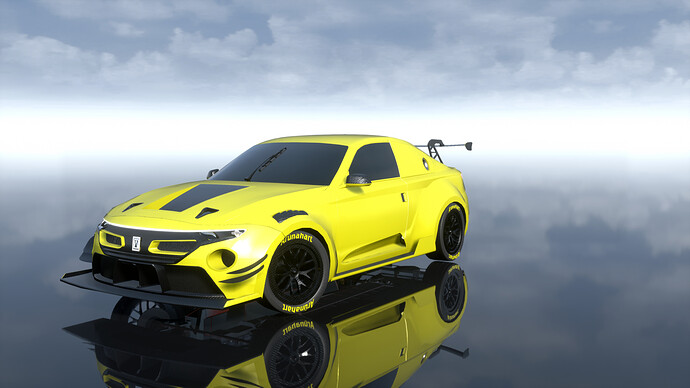 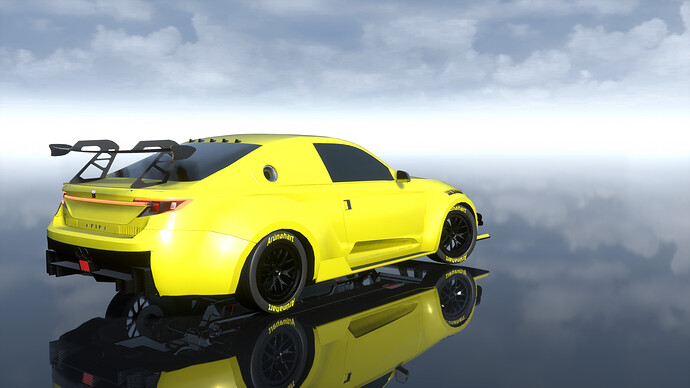 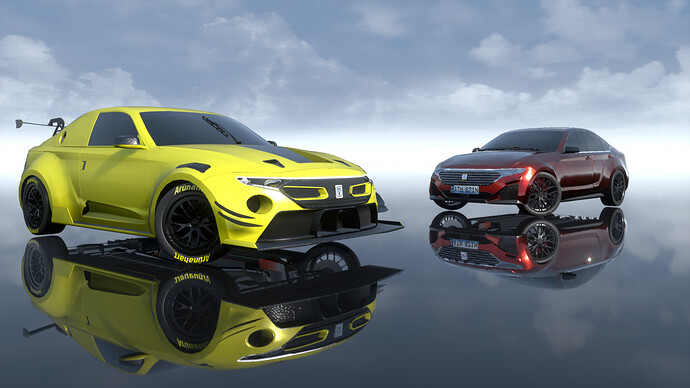 Solana wanted a 2+2 GT car to go alongside the GL300. The GT car would initially share a lot of the technology with the GL300 Sedan, but in a shorter, sportier 2+2 body style. However, halfway through the development of the two cars, Solana decided that the GT car would need to compete with more prestigious European cars, and as such would need to be more powerful a more powerful V8, and have as much cutting edge technology as possible. The car’s development was already heading towards being overbudget, so it was agreed that the car would instead have a turbocharged variant of the 2.8 liter straight 6 of the GL300. The car was released in 1987, a year after the company was purchased by Akira. 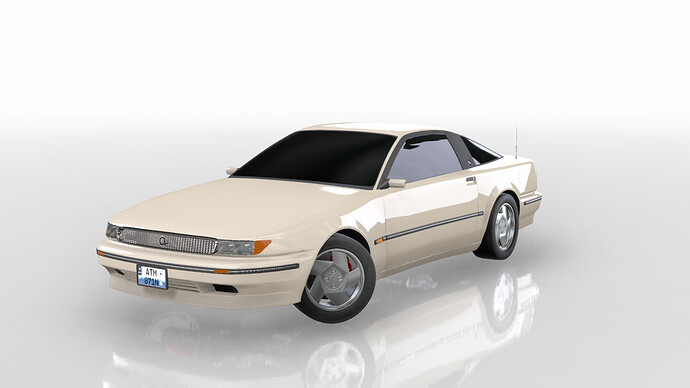 To be sportier than the Sedan, it has a shorter wheelbase, and a more sloping front-end. The sleeker design choices led to the headlights and grill being smaller than the sedan. 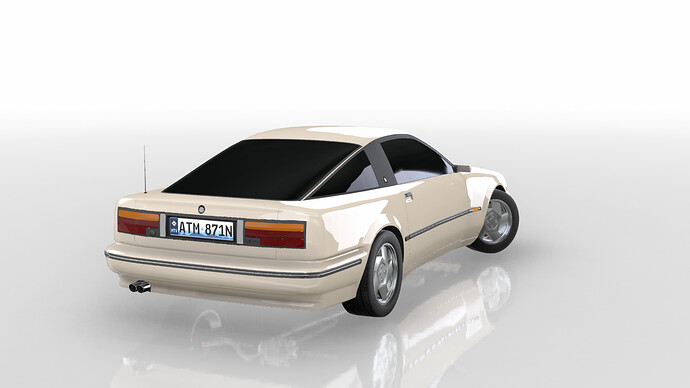 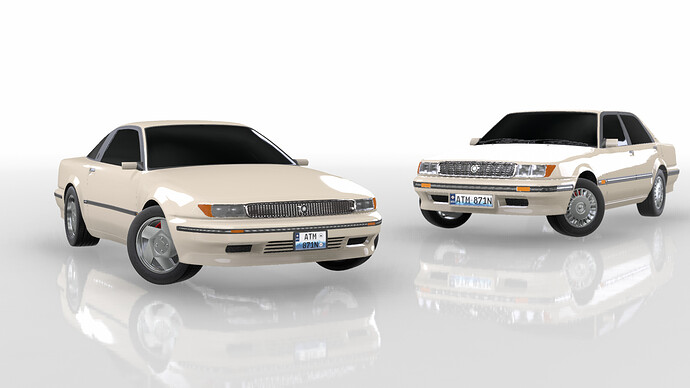 The 2.8 liter straight 6 engine is turbocharged, producing 210kw. It was mated to a 4 speed automatic gearbox. 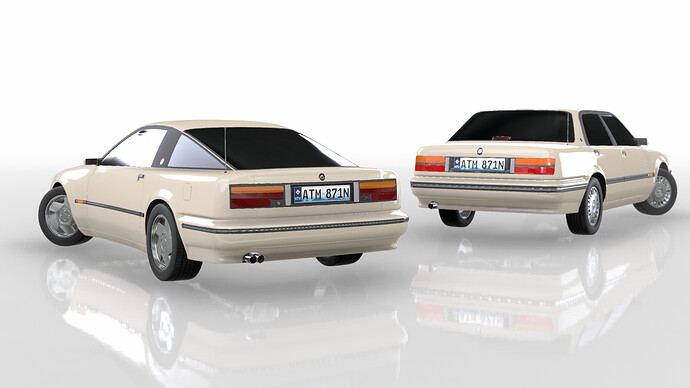 The car was sold between 1987 until the production of all Solana cars was discontinued in 1989, making the GT a very rare vehicle, especially considering that only 2101 of them were sold throughout the entire world. It is now seen as a rare collectable vehicle among enthusiasts. 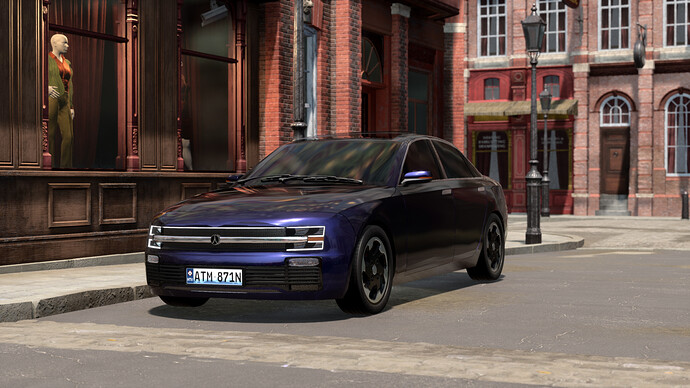 image1920×1080 702 KB
Available with a 3l Turbo V6 in the civilian specification. Rear wheel drive as standard but AWD available as an option. 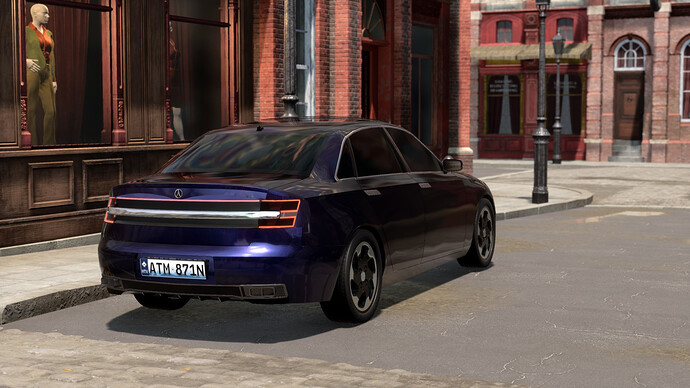 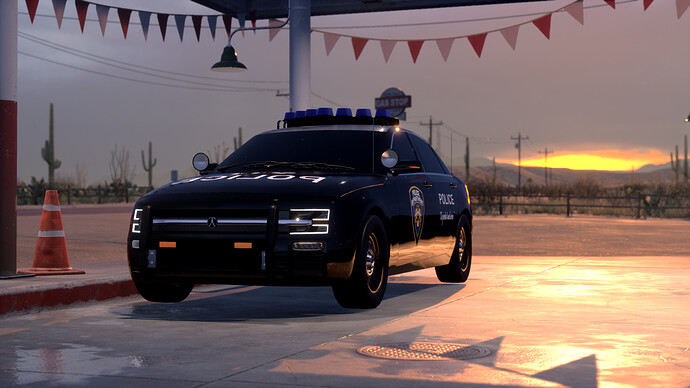 The police interceptor variant has a more powerful 380HP 3.5l twin turbo V6, strengthened suspension and AWD to ensure that the no criminal would escape it. 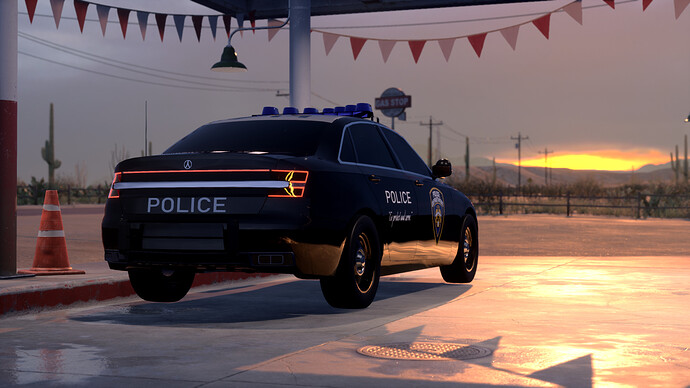 Thinking of committing a crime? 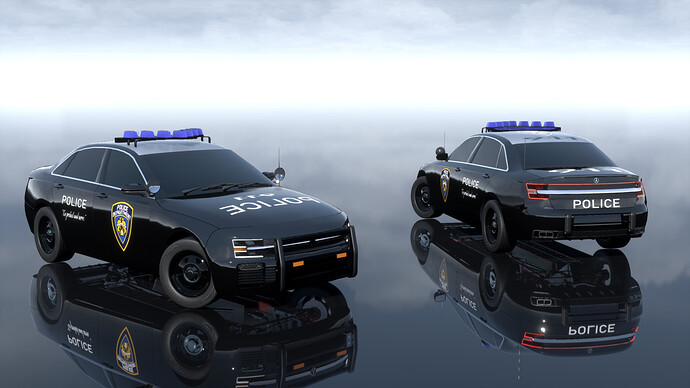 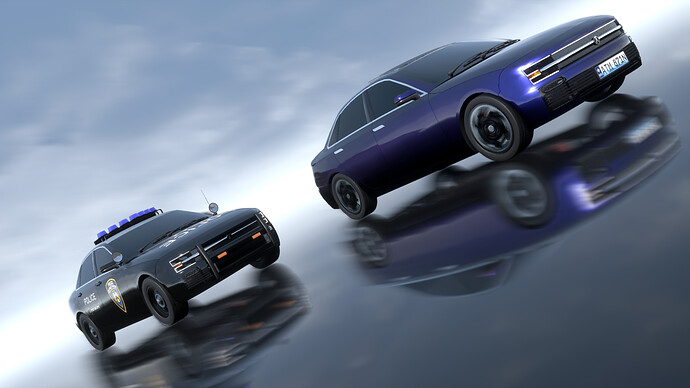