The year is 1969. A new racing league has been formed, and your car company has entered. However, there’s a catch. The only engine allowed is an inline 3. You have to brainstorm a way to create an inline 3 capable of racing in a proper race league. You can either build a whole new car from scratch or use an pre-made car and modify it to fit the criteria. Any car from 1950 - 1969 can be entered, and the winner will be decided by 5 criteria: 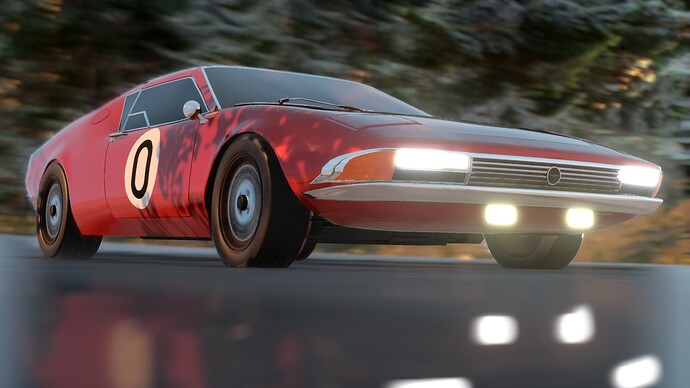 HiResPhoto4251920×1080 102 KB
Take, for example, this modified Iskra 380 Sporting as an example of what kind of modifications can be made

Re-Subs are allowed, if a mistake is made. You cannot submit an entirely different car. Please submit your entries via DM’s on Discourse, and I look forward to seeing what you come up with!

The dealine for submissions in September 21st.

Have fun and stay safe! - void

This contest is very similar to the 1967 Weekend Race Car Challenge, but set two years later, and with every car being powered by an inline-3 of some kind. That one was heavily reliant on BeamNG testing for the submissions, but will this series also use Beam? If it does, lap times in Beam testing will most likely be factored into the final rankings.

" Speaking of quality, quality sliders are unlimited on the Bottom End and the Top End to just make the engine work. If I find that lowering the sliders still allows the engine to run there will be a small penalty. The only stresses allowed are on the pistons, conrods and the crank, as that is sort of inevitable on an inline 3 of this size."

I sort of question this rule and I think that a maximum ET/PU value on the engine would have been a better way of solving this. Other than that it feels like a fun challenge and I think that I will try to make an entry for RAUK.

One question about the wings and spoilers.

I can get 100kg of downforce with spoilers, is it OK or do I have to tune down?

the reason i put this rule in is because without quality sliders i have found that large inline 3’s tend to have problems with the top and bottom end (my engine has +13 quality on the bottom end and +7 on the top end to allow it to run without exploding), and so i have allowed for unlimited quality on those parts alone. however, if i find that someone has just +15 bottom end and +15 top end there will most likely be a penalty

this series will also focus on beam, but i will factor in the calculated track time too; + 0.1 point for every second faster than my car

Would these “spoilers”-that-look-like-wings still be allowed?

Edit note: Should point out that Beam calculates downforce differently than Automation does, so the Automation stat has no bearing on how much downforce the spoiler will generate in BeamNG. Only the physical shape of the car affects the downforce & drag calculation.

Generally in competitions, though, there is no maximum amount of quality, on the other hand when it comes to motor sports challenges, I can understand them, since depending on class there is often regulations there you have to follow to not make things “too good”. I just don’t really know if I understand your rule fully. Let’s say that I have an engine where there is some stress on the parts with 0 quality on the bottom (but it won’t fly to pieces), while +2 quality on the bottom means that the stress is 0, am I allowed to run +2 quality on the bottom in that case, or not?

give me a minute and i’ll explain 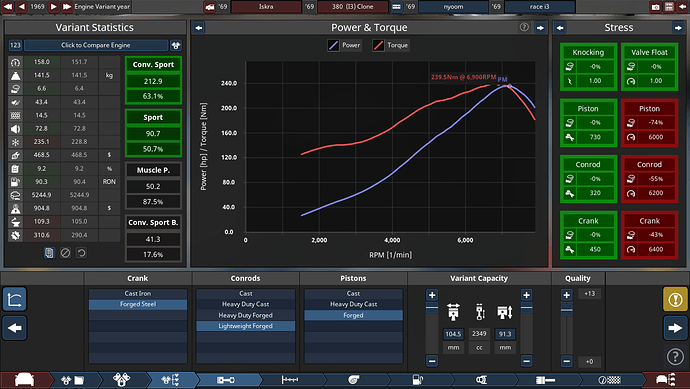 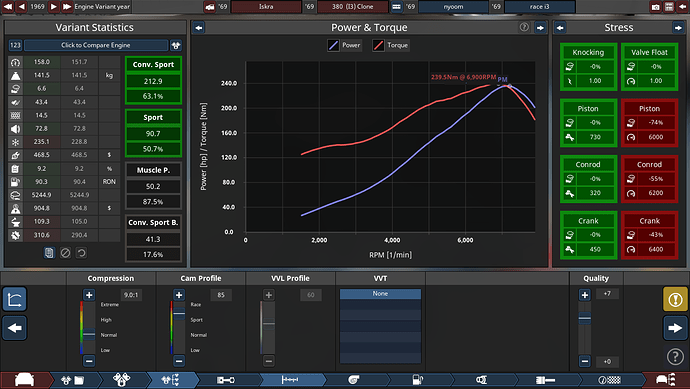 However, if i take that quality down one notch: 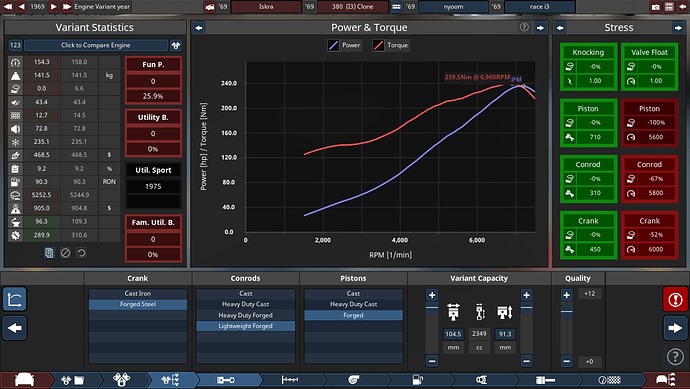 essentially the quality rules mean that you can only use quality to the point where your engine runs. Eventually the need for this will decline if i decide to continue the challenge into later time periods, but for now it’s our only real choice to get decent power out of these engines.

it’s complicated, sorry. i should have explained it better

just think, would this spoiler look out of place on a road car? if so, it’s probably not allowed

So? Will I be disqualified?

I guess they’re saying that spoiler judging is just visual. As long as it looks period-accurate, it should be fine.

exactly. since cars handle basically completely differently in bean to how they’re predicted to handle in automation the spoiler thing is more for periodic correctness

So would you penalise any +quality on engine parts other than what’s needed to make the engine run? (= what is spam?)

And I suspect unlimited +quality on trim is fine due to the huge budget?

But what if you don’t?

He leaves you the possibility so take it!