Something big is coming.

Yo, what’s good automotive consumers and enthusiasts of the world. It’s yaboi Nicholas Justinian, here at the North American International Auto Show 2019, bringing you the TL;DR of all the best automotive news! With one week before the opening of the show, let’s see what all the latest manufacturers have to offer!

Here Comes The Mirror Man., says Corsica automotive, with a very vague teaser of a muscle car looking thing called the cheetah. I don’t know who the mirror man is but perhaps he’ll show this car a reflection of itself? Or us?

The IREV Is something coming from AL autos… Can’t say too much about it as of yet. Maybe it will have good range, maybe not. Be premium? I don’t know. What I do know is that it has MASSIVE hypnotic headlights. Dear god, this thing is staring into my soul.

Huangdou is showing a new CC, and they’re apparently quite Buddhist because there’s something there about rebirth. Let’s hope this one is reborn as a swan and not as a donkey, hm?

Harada apparently has a whole new fleet to show, with a sports car, a crossover, and a pickup. The latter two are what Americans are really buying, and the crossover appears to have even been done by Luceat studious. You can tell because it looks far better than the other two. Edit: I’ve been told the sports car is actually the one done up by luceat. Shocker. I still think the crossover is the best looking one.

Dotara is showing us a “fighter”… cool. What’s it fighting exactly? What is it? Is it even a car? I can barely tell and there’s not enough info for me to care.

Evengis is unveiling another crossover… rest assured it will be boring as hell and plenty of people will buy it. You can stop by their stand or take a nap in Harrod’s to get the same experience.

We can’t wait to show you what we’ve been doing, AL autos says with some vague looking sedan thing. It’s frowning, it has hypnotizing triangle headlights the camera angle they’ve chosen to show it with is just terrible.

Shromet is unveiling a crossover as well… “The sports car for five” they claim. God, what a disgusting spew of marketing cack. It’s not a sports car and anybody who buys into their marketing campaign is an idiot.

Hokuto heavy inudstries says something big is coming. Well, anything looks big when you zoom into it that close. But I don’t know what it is other than that it’s red. It might be a toy. I don’t know.

Apparently Gabatron is unveiling a whole city? or more than likely it will just be some pretentious idealistic post apocalyptic village where everybody eats vegan cake and plants trees to promote some little electric scooter. God is that pretentious. Maybe make something that works in the real world.

Retronix is showing a terribly sad looking sedan. I hope it’s fast enough that I won’t have to look at it for very long… I mean, look at it! It just looks so sad!

Well, with one week to go, I’m sure there will be plenty more to show before the opening on the 14th. Maybe even a few good presentations? Being optimistic. But you can be sure to check in for Motornation for coverage! And be sure to check Our Page for an upcoming review, staring yours truly!

Harada apparently has a whole new fleet to show, with a sports car, a crossover, and a pickup. The latter two are what Americans are really buying, and the crossover appears to have even been done by Luceat studious. You can tell because it looks far better than the other two.

Edit: I’ve been told the sports car is actually the one done up by luceat. Shocker. I still think the crossover is the best looking one.

Edit: Thanks for the compliment!

At Birmingham this show: The all-new 2019 Brickham Sports Coupe
This car is built to take us back to when horsepower and top speed were’nt the only thing that mattered on a sports car, and how handling is just as important. Using a high-tec turbo 1.8l I4 generating over 200BHP and all round independent suspension, this car is built to be as fast as possible round a track whilst still retaining comfort and driveability. This model is available in 3 trims: GL (base model, standart interior, 6 speed manual $21079), GLS (mid-range sports model, with premium infotainment and 19’ alloy wheels, 6 speed dual-clutch, vented front discs, rear diffuser and a spoiler $22939), and GSX (high peformance High-output 3.8 V6 twin turbo, exclusive bodykit, sports interior and 7 speed Dogleg manual gearbox, coming late 2019). Various colours are also avialiable along with interior and exterior accessories. Exclusivley for this show, we are offering a 10% discount for pre-ordering any non GSX model. Make sure to get yours before we run out!

No, this isn’t the first F-segment car Ursula released. Although the original is cancelled to production due to the economic depression happening in 2008.
To be exact, this is the first production full-size luxury car Ursula made. 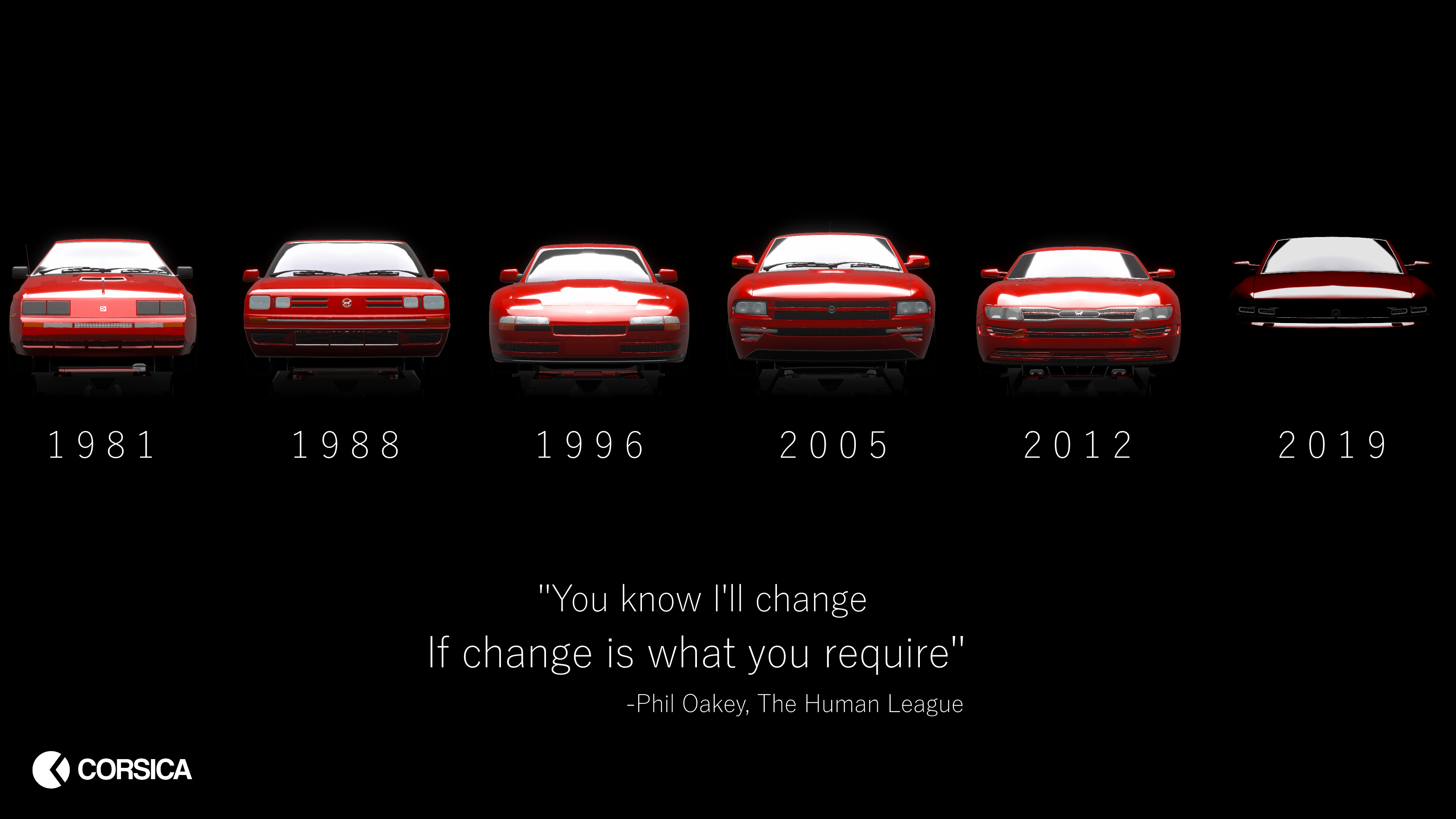 DETROIT - Ursula AG has officially held it’s first press event today, and officially announced the all-new Ursula F7 F-segment sedan. The F7 is Ursula’s first production full-size luxury sedan, and the first new sedan since 1980. With an all-new design, the most advanced engines, the latest technology and the best-in-class interior, the F7 will change your mind about luxury sedans, and will be changing history once and for all. The car will be starting production this fall, and sales (in Europe, North America, Australia, Japan, China) will commence this winter.

The car will be shown to public from January 16th to January 27th. Post-show coverage will be commenced at that time.
The next press release will cover some other new car releases and information, and will be held in 12th Jan at 9 AM EST.

5 days until North American Auto Show opens, and we have many reveals for it!

First up, we have Corsica with the Cheetah, which to me, seems to be a muscle car. They said: “Here Comes The Mirror Man”, and I have no clue what they mean by that. Maybe the car looks like you when it isn’t so dark?

Next up, Ursula, with the F7, and apparently it will change my mind. About what? I don’t know, but it seems it will “change history” and “perfection achieved” …eh, I don’t think so.

AL Autos is coming out with the IREV, which has some very bold lights, with another obnoxiously dark ad, although I can make out much more than the F7’s ad. It seems to be a compact hatchback with some sporty feel. Not very impressed if I’m honest

Huangdou seems to be coming out with a very yellow car. All I know is, it has taillights, it’s called the CC, and it’s very yellow.

With a total of 4 cars, Harada is coming out with 2 sports cars, who look “oddly” similar. They don’t seem to be ashamed of showing way too much of their cars, and I think the 7 old people who buy them will not buy it in that very bold color. They are also coming out with a rather uninspiring Crossover and Truck.

With Dotara, a company I hadn’t heard of until now, we have a fighter, I am assured. It seems to be a car, and another overly dark ad. I don’t know, just seems very generic.

Evgenis is coming out with a crossover as well, although this one seems to be more interesting than Harada’s, but, has it really touched everything?

AL Autos has even more bold headlights, and, apparently “they can’t wait”. Bet they can.

Shromet has a new crossover, and although it looks nice, I’m fairly sure it’s not a sports car, unless if the 5 implies that it isn’t very sporty for the 3rd row that it might have?

Hokuto is bringing something big to the show, not sure how big exactly though, as it looks like a midsize sedan. I’m probably wrong about that, but I can’t be sure

Gabatron is coming out with a small village with 3 cars, all of which are the same. The cars are rather small, and unless if there are no more than 6 people in the village, it will be a tight fit.

Retroni, Bradford, Lagau, or all of the are coming out with a very blue, very odd looking car, Apparently it’s fast, named after a very old Ford, and looks like a spaceship design concept from 1927.

Birmingham is releasing a concept car, which seems to… be a car. It seems they have already revealed all the information about it, and I could care less about it, as it’s very much normal.

Studio di design Fiorientino is coming out with a car which seems to be the successor to another, very old car, and it now has LED. The ad is very red, and reminds me of paprika for some reason, probably the shade of the red air. Never thought I’d say that sentence.

It seems I was right about the Corsica being a muscle car, as all the previous versions also look like muscle cars. The ad is still dark, but now with a quote from Phil Oakey, and I’m not sure if change was what I required.

I’m still confused by this car, why does it have 3 reveals? Or is it 2 teasers and one reveal? My mind still hasn’t changed about it, and I’m still not sure it’s perfection.

We have an ad that isn’t super dark for once with this, and it’s very bright instead. It’s a roadster without much that I can make out, although it does seem to have a sporty feel to it.

Deer and Hunt is coming out with… a Fallow? I thought that was a truck, but it seems that’s changed. It looks like a lifted hypercar, although I may be wrong about that, as it’s yet another very dark ad.

Speaking of dark ads. Hokuto might just have the darkest ad of them all, with what seems to be a version of their large crossover, with a black C pillar.

That’s all for today, possibly more will be revealed by the 14th, which is when I’ll be at the Autshow. Can’t wait to come!

Tanaka Motors will be unveiling something familiar.