It is the year 2017. Drifting has seen a huge increase in popularity the last months, as a consequence of the manga series Initial D becoming popular again. Cars from the 80s and 90s are now more sought after.

However, track days have seen an increase in prices. Most people cannot afford them now, and as a consequence, the bravest racers have decided to start racing in their local mountain passes. Even with the possibility of facing prison if they are caught, they won’t stop now.

Mount Haruna has become a Mecca to touge racers worldwide. Many visit it every summer, when there’s a race every saturday night, and many others have their cars shipped only to take part in them. 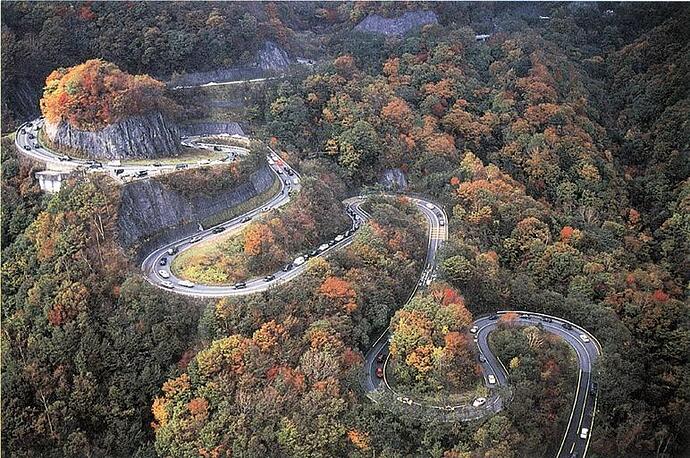 This challenge is based on tuned used cars (depreciation and budget described below) and touge battles. Calculations will be done in an spreadsheet based on formulas (description below).

This will be a 1v1 tournament. In each battle, the winner will enter the next round, and their rival will be thrown out of the competition. Each battle will be run on the Haruna Downhill, and will be a 1-pass, simultaneous start race, in which the one to cross the finishing line first wins.

This challenge will be run in the Kee build, as UE4 has a long way to go yet.

You are also encouraged to give your street racer a background on how they started racing, got their car and decided to take part in the tournament.

How are the calculations done?

Every car does a pass down Haruna. The circuit has three sections, and I write every section’s time down. I then calculate, using the sportiness value, how much time I have to subtract from the raw time via mathematic formula.

After that, using the drivability value, I roll a dice in every corner, to calculate how many mistakes the driver made and add that time to the previous formula.

The formulas for this are the following:

(To determine whether a mistake was made or not, you have to generate a random number between 0 and 1, rounded to two decimal places. If the number is higher than your mistake multiplier, your racer will have made a mistake).

First of all. When giving your street racer a background, he has saved/received/stolen 20000$. With that money, you have to buy and tune your car. As cars must be from 1980 to 2008, the price you’ll have to pay based on the year (depreciation) are as they follow:

You’ll have to subtract the price you payed for the car to the budget. For instance, if I buy a car from 2001, I’ll have 20000 - 7000 = 13000$ available to tune the car. Before you tune it, write down the price. You can submit any car from any of your makes or other makes if you have permission from the player behind it.

Designing and tuning the car.

So now that you have decided which model you want to submit, you will need to export two trims following these regulations:

Tuned trim:
-Budget: 20000 - (car price) over the stock trim’s price with 0% markup. (See Budget and Depreciation for an example).
-No pushrod suspension. No active or adaptive suspension parts.
-No carbon fiber or glued aluminium chassis. (If you can afford it, fiberglass and carbon fiber is allowed for the panels).
-All layouts (FWD, RWD, AWD/4x4) are allowed.
-Maximum power to weight ratios: 0.315 for FWD, 0.308 for RWD, 0.301 for AWD. (Measured in HP/KG).
-Muffler removals are allowed, but you need to have at least a high flow three way catalytic converter. You would be reported as a gross polluter otherwise.
-Engine swaps are allowed, but you must indicate where the engine came from (it can be from real life cars, as long as the engine is similar enough).
-You can remove as many seats as the body allows you, but you must have two seats at least. They must be either basic or sport.
-Only premium 95 RON fuel is available.
-No carbon ceramic brakes, no active wings and no cooling flaps.
-No fully clad/downforce undertrays. Only semi clad and offroad undertrays are allowed, as well as no undertray.
-Quality sliders must not exceed 15 in total in the engine department, and must not exceed 5 in each section.
-No negative quality sliders.
-When designing the tuned trim, you must do it in 2017.

How do I submit my car?

PM me the .zip file you generate when exporting the car. You can find it in Documents > MyGames > Automation > Exports. Name it as follows:

EDIT 1: Changed the “minimum 4 seat” rule, which prevented roadsters and 2 seaters from taking part in the competition.

EDIT 2: Major balance fix in the budget section. (Sorry for the inconvenience, didn’t notice before).

How are the calculations done?

Every car does a pass down Haruna. The circuit has three sections, and I write every section’s time down. I then calculate, using the sportiness value, how much time I have to subtract from the raw time via mathematic formula.

After that, using the drivability value, I roll a dice in every corner, to calculate how many mistakes the driver made and add that time to the previous formula.

Sorry, this is not enough to make an educated build. We need to set our minimum acceptable values before we get started on it.
Also why “4 seats minimum”? MR2’s and miatas are not welcome?

You’re right. I guess I’ll have to set minimum values. On the 2 seater thing, I wasn’t thinking of Miatas, roadsters and these kind of vehicles at the moment. My fault for not taking these into account.

No no, WE have to set the minimum values we’re ready to deal with. You should provide formulas for us to work off. The challenge must be transparent enough, so that anybody could run it, that way we can test our cars properly before entering.

I see now. I misunderstood your previous message. My bad. I will add the formula behind it.

Also… And here I was thinking that 640hp is enough from Saminda 2.2 liter engine in a Tsukuba. Time to see what the chassis got to offer in 2017.

##Nicholas Justinian.
An Arrogant, rude, over the top personality. He is stubborn beyond measure. An aggressive driver, his signature racing technique is the divebomb overtake.
That said, He has quite the mind for engineering, although the entirety of his experince has been pen and paper knowledge, rather than experince leanred from
working on cars in real life. Although he would argue he’s played Car Mechanic Simulator and taken enough courses to work on a car with no difficulties.

After spending many years in the United States, he has just graduated from his 4 year school as a B student all around. He’s layed around the house for six months, because he can’t find a job that ‘suits him’. He’s now spending time in Japan on a “Self Discovery” trip, funded by his wealthy parents. Who were more than happy just to get him out of their house.
##The Stock Car.

The stock car, is 2004 Shromet Interval 540. The original car debuted in the 80s, and was a showcase of futurism, and Shromet’s engineering chops. Combing new elements, such as the “Thermoset Polymer Construction.” Which we know today as Fiber Glass.

Despite the original using anemic 5.4 Liter V8, The car cemented Shromet’s Forward thinking engineering enough to show that it wasn’t a passing trend of a company.

However, Shromet focused more on it’s base line, and did not update the Interval over the years, and by 2004, those old problems were clearly showing. It used a 5 Speed gearbox, and despite the Original 5.4L engine being recast in aluminum, it was still an old design. in the 1980s, perhaps the 240 Horsepower may have been acceptable, but in 2004, Honda challenged that number with a naturally aspirated engine that was half the size. The fact that this was a base model meant it was pretty pathetic as is, and Nicholas managed to scoop it up for $6,500 Dollars, and paying 55243 Yen (About 500$) for shipping, it was ready for an upgrade. 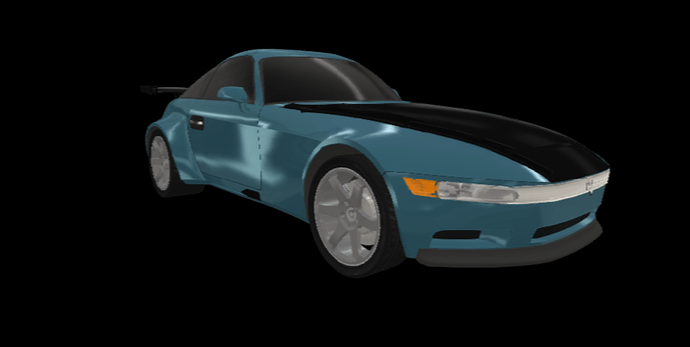 Time To tackle the Touge.

Martin Todd, an ex KHT empolyee, moved to Japan in 2015. The automotive culture took him in, and soon after he has sourced a pretty banged up and beat KHT Tsukuba from the early 90’s. The choice was obvious since not only he knew the car pretty well, it being the most popular KHT vehicle ever, but also because the little coupe was powered by Saminda HE22 engine, which made sourcing performance parts easy as pie in Japan.

By 2017 Martin dropped his track day hobby since it was getting too expensive, and restrictive and joined a touge oriented club. Club challenges were issued a lot, and Martin improved his skill greatly by pushing the car to the limit sometimes 2 or 3 nights a week. When the crew heard of Automation D championship style challenge they knew they had to take part and send one of theirs to show the competition what’s what. After a few test runs it was clear that Martin and his Tsukuba are the fastest bet in the whole club, and that’s how he ended up here. I’ve got an 80s car lying around I am trying to tune but switching to 2017 has it gain 200 kg weight I can’t remove with quality sliders!

What a beauty! The Tsukuba really is one of my favorite cars at this forum. Let’s see how it goes against the Surge

Yeah, let’s just say, Im happy with it, but Im cautiously happy, so I’m not betting on the thing just yet. Also for some reason I do not feel that much attachment to tsukuba, while many seem to like it very much. I recognize it’s potential, but the thing is a tool to me. Don’t know why

Maybe because it’s got a Saminda engine XD

Well, that make doing a engine swap a lot easier, since you don’t have an attachment to the old engine

But I like it’s appearance, it looks amazing. I believe this is fault of the large and low body.

Ohhhh many many likes!!!

This is just for the engine?

This is an opportunity to read between the lines of a vague rule.

15 quality into the engine, unlimited into the chassis, max 5 per section in engine and chassis.

max 5 per section in engine and chassis.

Since the engine isn’t cited anytime I though it was only to the engine. Thanks

How many qualty points can we have in the chassis dept? No answer, meaning “if it’s not written down - it’s a rule” takes effect and since there’s no limit on chassis quality imposed - no limit.

“and must not exceed 5 in each section” - self explanatory.

since there’s no limit on chassis quality imposed - no limit.

The limit is you can’t go negative!
Which sucks for the usual weight balance shenanigans with the interior.

Yeah, I could barely get it within 100 kilos of it’s original weight, sadly

I found this old 80s Toyota, I am sure it will do fine after I tune the 1.6l engine and flare out the wheel housings.