Bogliq%20440%20Nur735×350 285 KB
Bogliq USA finally puts their premise to the test: Can Bogliq USA make sportscars as good as any European marque?

In the mid 50’s, Bogliq USA engineers, along with the head designer, decided to supply the US sportscar market with a locally designed and built product that was “as good, or better, than anything European”. This project came to market as the 1957 Bazooka, a RWD coupe powered by a large inline six.

Lauded by the US Automotive Press at the time for it’s handling prowess and pleasant performance but it never had the chance to go head-to-head with the Europeans. The Naiad replacement strayed from the original concept and therefore it was up to the Ungoliant to prove its worth against the best of Europe.

In the late 60’s the Special Project team was formed, taking the disparate groups developing fast road cars (the AE engineers), racecars (the SCCA homologation program) and sportscars and then grouping them together, ensuring greater cohesion in product development dovetailing into superior racing products.

Therefore the Special Projects Racing team was founded, ostensibly for developing radial tyres with Goodstone, to test the Ungoliant against all that the Nurburgring had to offer. Bogliq may not have the money to enter F1, but they had the funds to test the waters in production car racing…

OOC: I traditionally come last in these things so I’m aiming to get to the finish line; anything else is gravy! If anyone wants to test any of my Generations II cars for articles or lore building, then PM me what you want and why you want it. I really enjoy making lore so… Ask and you may receive!

Good luck everyone, hopefully no-one crashes and thanks @Der_Bayer for running this competition again!!! 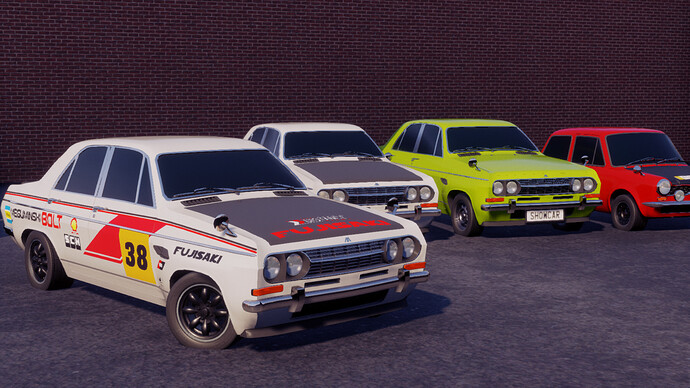 Hannover, Germany. Meguminshi Motors decided to form the official racing branch named “Arcwiz”, and its first event will be the 1970 Nürburgring 24 hours in the group 2 class category.

After the rally success in rallying with the small but nimble Meguminshi Shosei (appeared in the far right of the picture), Meguminshi Motors decided to form a special team of engineers and mechanics to establish the official racing branch “Arcwiz” with supports from many Japanese companies, such as Fujisaki.

Also, the “Arcwiz” has the responsibility to make a special vehicle like “GSR” badge version of this Megminshi Bolt, which you can buy it straight from the Meguminshi Dealers. 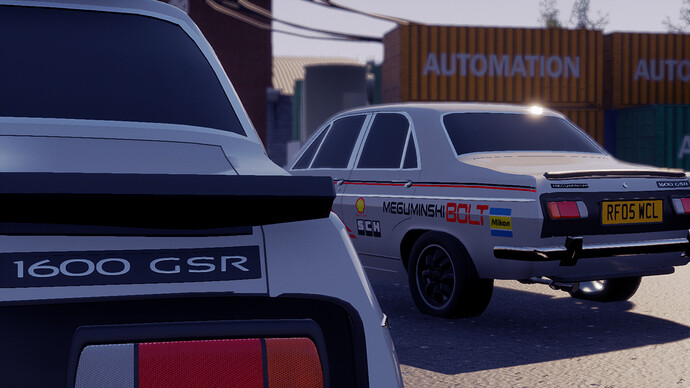 This looks like a lovely competition. I’m currently in the process of designing a few cars and to see in which class I can best apply before I send my homologation model in.

I have a few questions though:

As the downforce is the sum of front+rear, does that mean it’s allowed to go over the max kg of downforce with one of those if it’s compensated with a negative downforce from the other?

I saw some people talking about laptimes of 9 minutes on the Nordschleife, Is that for the top classes? As I can’t get my first prototype (a humble 2000cc) anywhere near those times, even if I change everything with the allowed changes for the competition model in group 2.

@z2bbgr lovely car! I was wondering how you got the text on your livery. As I am struggling to get any (nonbadge) text on my car apart from the brand logos and letters I downloaded from the Steam workshop. 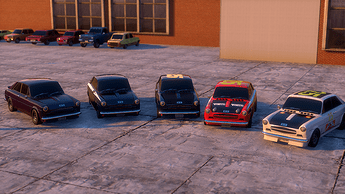 You have already answered the reliability question with “as much as possible” so please skip the following if you have nothing else to say.

I only come back to it because I’ve gone and made my car a good amount more reliable and also 0.5 whole seconds slower around the 'ring. Breaks my heart. The formula is supposed to be:

There used to be a graph for the Hockenheim endurance race, I wonder whether it’s still anywhere close to the truth? (Replacing “finishing chance” with “not getting towed to the pits”)

Please don’t pull out old graphs from 4 years ago. This just confuses people and is not what will be used in the 24h.
Edit: I’ll edit the graph away from your post.

As the downforce is the sum of front+rear, does that mean it’s allowed to go over the max kg of downforce with one of those if it’s compensated with a negative downforce from the other?

I saw some people talking about laptimes of 9 minutes on the Nordschleife, Is that for the top classes? As I can’t get my first prototype (a humble 2000cc) anywhere near those times, even if I change everything with the allowed changes for the competition model in group 2.

Lap times vary extremely depending on engine capacity and Group. I won’t give away any lap times, but you can talk to the guys on Discord to get a few numbers.

you can talk to the guys on Discord to get a few numbers.

which channel is this talked on? 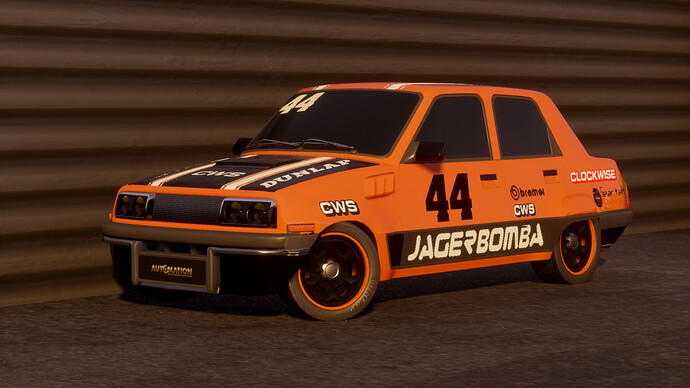 Am I locked into my chosen number, or can I change to another available slot?

As always, if you think your car was submitted and you have not been homologated or a missing practise results, please give me a ping.

Homolation will be open for another 5 days, 20 hours, 45 minutes.

Am I locked into my chosen number, or can I change to another available slot?

Yes, as soon as I have locked your number in the spreadsheet, you have to use this number. Don’t take a number if you are not sure yet.

I have some questions about practice results and using that to fill out the form for pit strategies.

On your spreadsheets you list the outgoing lap as lap 0, so if my car makes it to lap 4 with 2L left in the fuel tank, which is 5 times around the track, how many laps do I put as between fuel stops? Five laps?

I also do not understand enough about tire wear. Let’s say for instance that my full stint of 5 go-arounds showed me 12 percent tire wear on sports. What percentage of tire wear would it be time to consider a new set? When they get to be under 50 percent, or under 25 percent? When does performance and drivability start to fall off considerably? Is there any accountability for rain, as in if it starts raining hard my car might come in to pit because the tires are worn to the point of still being acceptable for a dry track but dangerous if the track gets wet, or is this all a game of chance regarding the weather? What percentage of wear would be the lowest acceptable to be driving in the rain, over 60 or over 40 percent?

If it says 4 laps, then you are 4 times around the track. You would then say 4 laps between fuel stops.

The effect of tire wear cannot be summarized easily. There is a huge dependency coming from the power of the car. The more powerful the car, the quicker it will reach grip limits during acceleration. This can, especially in rainy conditions, severely influence acceleration. With low-power cars you have less of a problem. In corners, it is roughly the same effect for all cars I would guess. There is no easy way and experience helps.

If you want to estimate a bit how wear influences your lap times, you can play around in the Sandbox:

Note: this method can cause handling differences in Automation, resulting in other effects which influence your lap time. In the BRC, this is not the case. Tire wear directly influcences only the available grip during acceleration/braking, and the maximum cornering speeds, but not the overall car behavior.

Sorry but there is no easy answer.

Tire wear directly influences only the available grip during acceleration/braking, and the maximum cornering speeds, but not the overall car behavior.

I can see that BRC tracks front and rear tire wear separately, but if it doesn’t affect overall car behavior, then does the difference matter or does only total wear matter? Or only wear on driven wheels for acceleration?

For acceleration, only the driven wheels matter, for cornering only the higher wear of one axle matters (so here it would be good to balance wear). For scaling brake distances, it is also based on the maximum wear of one axle.

Did my post from last night get deleted, is posting racecar designs considered spam ITT?

I don’t think there has been a post - please go ahead and post your design! I definitely encourage to do that, to get everybody in the mood 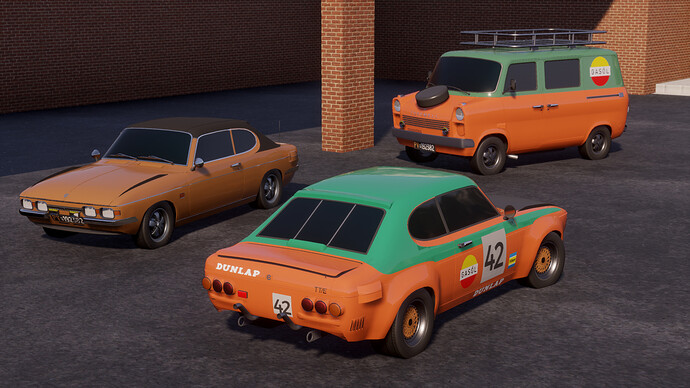 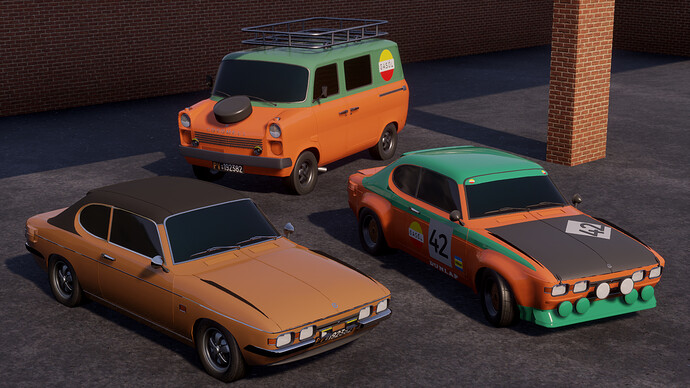 Moody shots from the pitlane during the Coromell’s first rollout