His Highness Demands is an ongoing (for a while) challenge, that will follow the communist monarchy, (the only one in the world), Semyonovia, through 2 different rulers, 5 decades, 3 wars, and 1 rebellion. Your goal will simply be to become the remembered Semyonovian car brand. Not a Semyonovia-based manufacturer, but one (whether German, American, British, or anything else) that is the favorite of the Semyonovian people.

Where is it? (mostly lore) 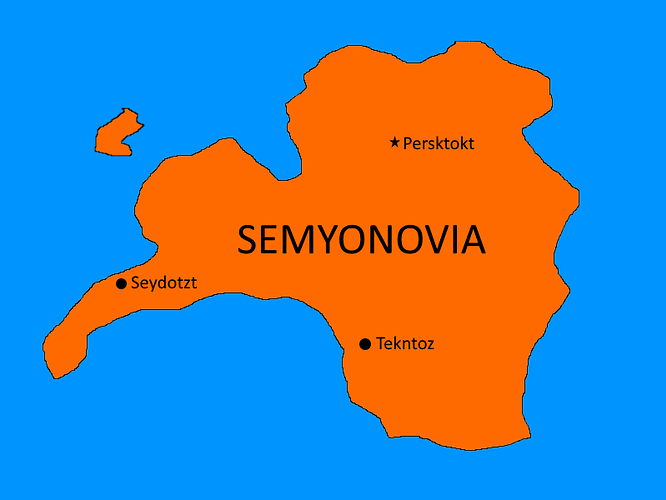 There are many smaller towns and villages throughout the country.

For precision, if there are needed word decals on a car, i.e. a Semyonovian police car, flip the letters vertically. That’s it. No super complex language rules.

The Ruler(1):
Gevketovt II, born on November 4th, 1919, grew up as rightful heir to the Semyonovian throne. At the early age of 8, he showed a love for cars. Specifically the American racers and later the pre-WWII European sportscars. But sadly, Gevketovt I disliked automobiles in every way. So much so, that he banned them from Semyonovia. Thankfully for this challenge, Gevketovt I died on September 28th, 1949, which meant that Gevketovt II could finally un-ban cars. Which he did.

His Highness Demands Round #1: 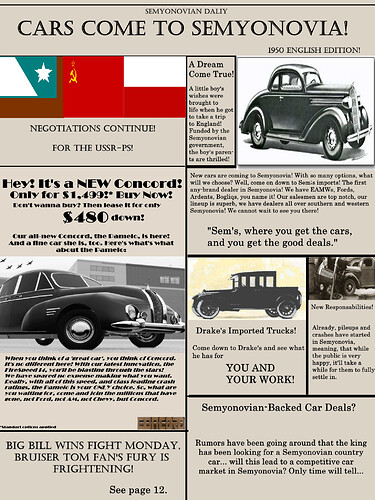 King Gevketovt II has declared that, along with cars getting un-banned, he is also looking for a partnership with a manufacturer, to try and get a car in every Semyonovian driveway. Rumor has it that the desired car is a rugged, dependable station wagon…

His Highness Demands Round #1 Rules:

His Highness Demands Round #1 Judging Criteria:

Feel free to suggest anything or ask for clarification.

Given that the king wants an everyday car, I’m assuming sportiness will not be much of a concern here…

Yes. It isn’t a concern.

And, how could I forget:

I look forward to this round, unfortunately I can’t use GMI as they don’t exist until '65 but I can make a cheap LLA, maybe something designed for the British countryside will work…

Why is the budget so high? I’ve made something that feels pretty good and it costs just $900 (scores well over 150 in both family and commuter budget)

This seems excessively high for 1950. Safety was not a consideration in the slightest for the designs of cars of that era. Only really became an issue around the 1970s.

Concerned about the use of ingame markets as a judging criteria. In sandbox, they’re a bit all over the place, and really make for some not-so-realistic design decisions when making cars.

You say maximum horsepower and torque but do not fully specify the Units you are listing.

@zschmeez
Well, since the public has just witnessed a new mode of transport become available to them, their excitement will lead to adrenaline, which in turn will lead to crashes. Many crashes. So, yes, it’s probably a bit high (and I’ll change it), but the king wants to be cautious.

@Fayeding_Spray
The reason for the use of demographics is because, most likely, the king would use them. His finance and market research analysts would create the demographics for him to use. And besides, the other preferences should keep the non-realistic builds out.

@DeadlockRiff
In hindsight, (after looking at that JAF) you’re right in saying you don’t need both. I’ll fix that.

Ah, ok. I will clarify on torque, but, I don’t think there are any different horsepower units. (Correct me if I’m wrong)

For this competition the entries have to be made in beta?

I was just going to ask the same question. ET’s I have heard are kinda different right now in the Beta… I have a car in the previous version I could submit now.

@ELBruno and @GassTiresandOil, no, I will not be using the open beta, because it’s just not as stable as the standard version.

The open beta isn’t so unstalbe now and have a better export than the normal game. For me you kill your challenge, everyone is using the beta.

Everyone? Actually, I’ve heard that some people are having trouble with the exporter in the beta.

I could see doing this round in the old version, then if enough is fixed in the beta by next round switching over.

currently, the openbeta has issues with .car importing.
but doing it in stable branch also has fixture-related issues

just have a look at CSR93.
the problem there is exactly the same

Yes, although I’d rather send in a car with the danger of some fixtures vanishing than not being able to send in anything, so that’s why I’ll stick with the standard version. 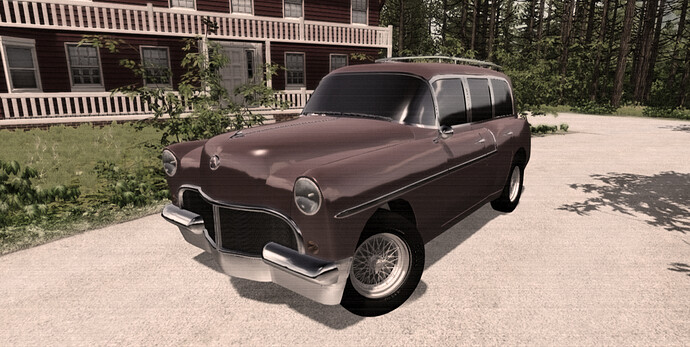 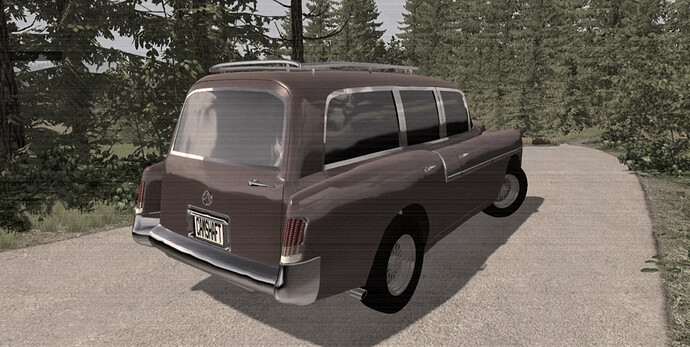 How much is the bonus for running on Low quality fuel?
I can make my car run on low quality, but that will influence the markets in a negative way. Also i could of course get way more power out of regular fuel.