[SIDE QUEST AUTOBEAM] Dew Running, The origins of the CCC

Its truly a dystopian reality. Every car seems to have either a massive 16 liter v8 or a 0.3 liter boxer 2. Auto racing has been banned, the government has put police cars on every corner, and worst of all, Mountain Dew has been outlawed!

A Canadian and his partner, you, see a business opportunity.
As the USA has not outlawed Mountain Dew, you see the opportunity to smuggle Mountain Dew. It wont be easy though, and it definitely will not be possible with any standard car. You both rule out any normal modern car, as they will be too slow and heavy to beat the vicious police.

They have their eyes everywhere after all, so the only way to avoid them is going fast, or at least that’s how you see it.
Supercars wont work either, you need space for that dew, and they’ll too easily be found, and lets not forget that you are doing this for money, something you don’t have…

You both know what is left. You’ve made your choice, but was it the right one?

The government and police were blitzed, as many people had the same idea. They have decided to legalize both auto racing and Mountain Dew, but now life is boring!
You two decide to host a local racing series while tripping on mountain dew.

This was how the first CCC season got formed, a definitely not inspired story basically exactly the same as NASCAR or whatever that small series is called.

Truly inspiring, and that is why you will be recreating exactly what happened in that summer, or was it winter? Ah forget it. Lets get to the challenge!

[ACTUAL START OF THE CHALLENGE IF YOU DON’T WANT STORY]

Welcome to the 1973 Dew Shining challenge!.. Kind of.
You will be making cars from 1965 (As stated in the story modern cars are dystopian and terrible) used for smuggling Mountain Dew. This will mean that you’ll need some serious space, and some serious suspension.
Of course, you probably wont be driving away from police or storing some serious Dew in the back in a stock car, so you will be modifying these cars to very few rules. The goal will be to just make the bonkers car you can with what you have. (Ignore that this is similar to the BBR)

Anyways, lets get to some ideas and inspirations, as this is a fictional event in this dimension.

If i were in this situation, this would be a pretty good choice for me. It looks quite normal, but that’s perfect. The AMC Rambler, the one with the different roof would work well too. 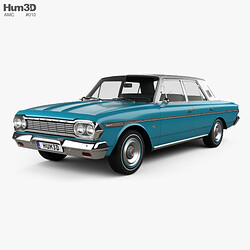 If you were logical, another good choice would be a van. With little modification it should have some good space and suspension, plus a good engine! The Ford Econoline. 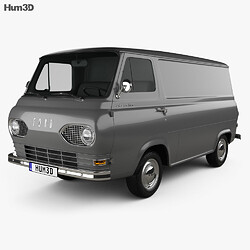 Or what about a hearse? More than enough space plus a normal car!
The Cadillac Eureka. 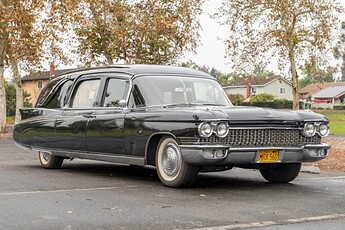 Ok, one more. The classic moonshiner, the 1940 Ford. Self explanatory. 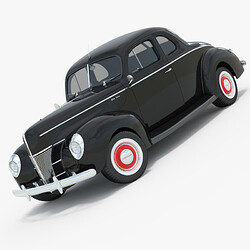 Ok, lets get to the rules. Also, did you notice that 3 of those cars were black or gray?

Ok, that’s it. Lets get to suggestions. I’m very high right now, so i hope they aren’t ridiculous!

If you are making a detailed interior, i heavily suggest placing the dew creatively. A fish tank, a chair filled with dew, a few barrels, piles of weed… Ok maybe not that one, but you get the idea.

Meme cars encouraged. We are transporting dew after all. You can completely ignore the first suggestion if you want to build a full on meme car, but i don’t entirely suggest that.

NOTE: THE CARS WILL BE DRIVEN NORMALLY, NO AI!

I usually allow exceptions to rules, so if you really want one and are making something special you can ask!

The deadline for this challenge is currently the 10th of September (this might change).
We don’t currently know when round 2 and 3 will happen, but round 1 should happen on the 11th of September around 2 pm PST.

This challenge will be streamed on the bradleegarage twitch. Twitch

Remember to suggest anything such as rule changes early! I don’t usually do them after the first entries.

Special thanks to everyone again, and lets make this a blast for Brad! For the garage!

And remember my forgotten rule.
Have fun! That’s the point of the Side Quests after all! For the CCC!

I’ll try to be here to respond as quickly as possible!

I’m not sure how I’m supposed to fit the V16 I’ll need to simulate a mighty twin-engine Roadburners vehicle in under a 20k budget, to be fair.

I mean, I can come up with an idea, I’m sure, but… It may have to be way more normal than I planned for this one.

Hows it going with your v16? Do you think it’ll be possible? Otherwise you could cut a roadburners engine in half

Yeah, there’s no way I can get the V16 in there. And the only reason I was going to use the V16 was to simulate twin V8 engines. That 20k limit killed my plans for this one, sadly. Which means no Roadburners for the Dew Runners, because I’d have to keep the car sensible on the outside as well as the inside.

I can make a V12 work, barely, but not in any of the bodies I want to use.

I’d take an exception, but I’m not sure I can design it cheap enough. Even my other V16 powered menace took every bit of knowledge I had to get a 1.5-ish liter V16 under $30k.

I’m guessing your plan is more specialised and requires more money, but I can send you the V12 coupe I have; it’s at $18,200 right now with decent displacement

Keep in mind that the last v16 entered was into the bbr, and that was i think triple over budget, so if you can show me stats im happy to give you an exception

I’ll finish building it, then. Yeah, once I realized I wasn’t getting anywhere with pulling the price down, I gave up on it.

Just remember to not make it too fast!

This is me we’re talking about. It might be quick in a straight line, but it’s going to die around corners. And it’s probably going to outright fry the rear wheels. 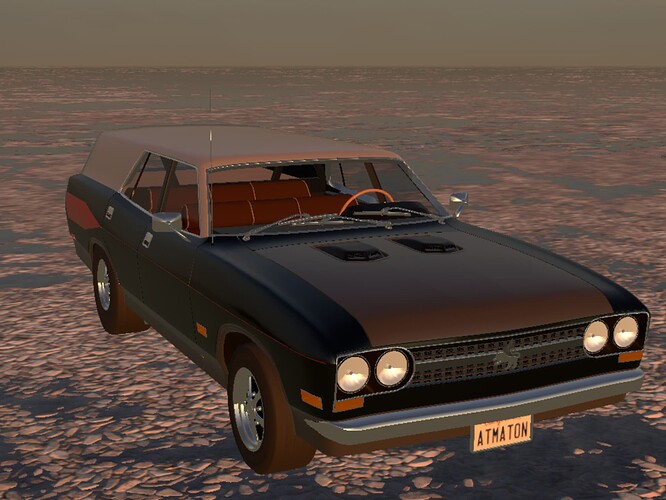 From the outside, we’re your average old Bricksley Cyclone panel wagon with a cheap aftermarket hood, fat rear tires like a wanna-be dragster, side pipes like the cool kids in town. 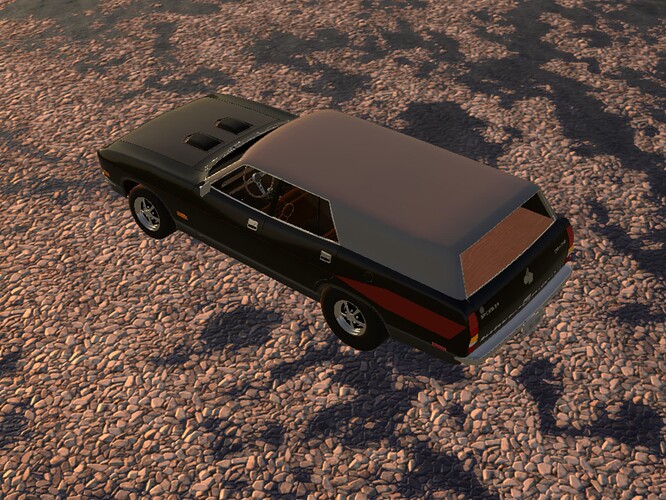 Even got a bit of plywood in the back, hidin’ the cargo from the police.

What no one tells ya about the Roadburners Juicebox is… 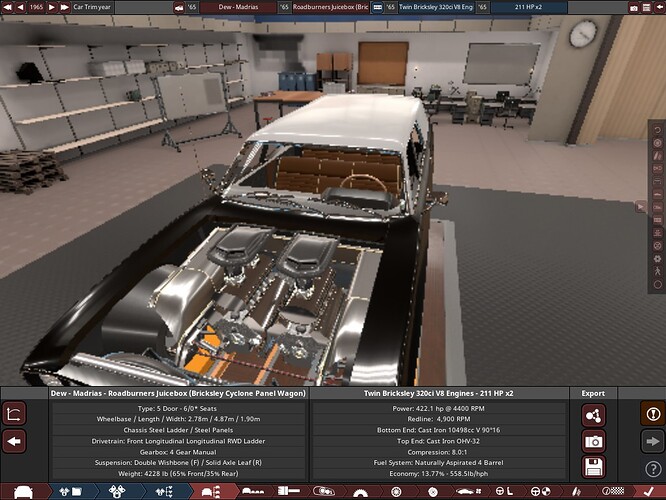 You only get to know half of the story. We mashed twin Bricksley 320ci V8s together, coupled to a custom adapter and mated to the factory four speed. She goes like hell in a straight line. 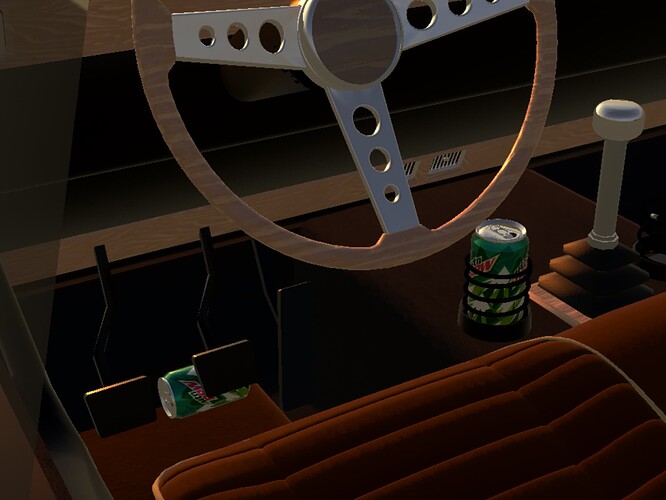 And you better not try stoppin’ 'cause there’s cargo under your brakes. Would hate to have to get that out of the carpet. Let alone explain to the cops why your ride reeks of Dew.

Dew stored in very obvious places. Police wont be too happy about that!

Oh, I know, but it’s more of a meme vehicle anyway. I was tempted to go full-out Hot Wheels and stuff half the engines through the hood, but, that just makes it impossible to drive. 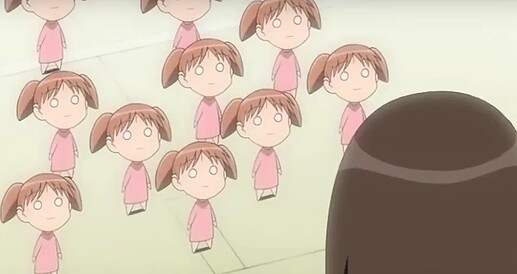 Does this refer to the load capacity value as shown in the detailed stats screen in the overview tab?

I’m working on 2 right now. TOTALLY different approaches. One is very sensible, one is VERY not lol.