Note: The current thread is based on a LC4.1 campaign. Things may change somewhat after LC4.2, esp. performance figures due to RON changes, and the looks of the car due to the necessary redesigns.

From early on in life even before the war, Archanan marine engineer Andrej Mayster Sr. had a dream: to build and drive a lightweight roadster with excellent handling. While he had always had a clear idea how he would build the car, he faced two problems however: he lived in Archana and he had no money. The latter problem was solved in the late 1950s when he inherited a medium piece of land from his uncle on the shores of Lake Mara near Glensk.

Despite all odds, he managed to get a loan from the bank against the land and he started Mayster Avto Manufaktura in January 1960 together with a few of his engineer friends back from university. In a small shed, they set out to design the detailed blueprints for what would become the Mayster Triumf and built a large workshop (you could almost call it a tiny factory) next to it on the land, just large enough to assemble 2-3 cars at a time. 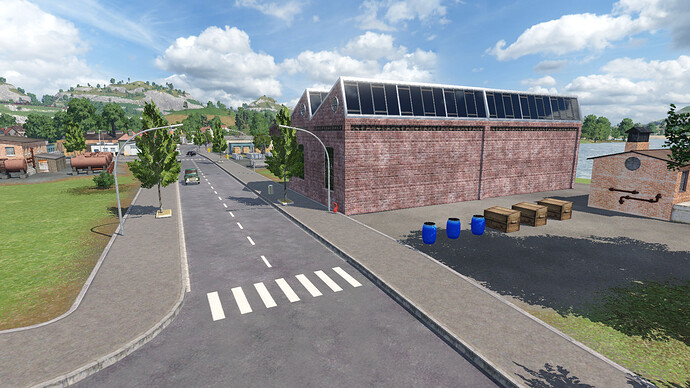 Since Andrej had experience in building boat hulls out of fibreglass, the Mayster Triumf got a fibreglass body, built on an aluminium space frame. His friend Natalja Karova was part of the team that had developed flat-4 and flat-6 engines for the first generation of post-war light Archanan aeroplanes, and thus she was the main driving force in developing the Triumf’s initial 1.6 litre DAOHC flat-4 with a single barrel twin carb.

Tuned for the then-prevalent low quality fuel in Archana, the engine made just short of 80 hp. Mated to a 3-speed manual gearbox, this was enough to propel the first generation Mayster Triumf in under 14s to 100 km/h and to a top speed of 165 km/h. Fuel consumption was around 18.8 l/100 km. The other hallmark of the car was the detachable softtop that did do a basic job in protecting the driver and passenger(s) from the elements. Nominally, the Triumf was a 2+2 seater but the back row seats could only realistically be used with the softtop removed and a blatant disregard of basic safety measures.

The result was like no other car in Archana in 1962. While there was almost nil realistic interest in the car in their home country, the first prototype versions managed to garner some interest among the Dalluhan car scene - especially since they would essentially never need the softtop anyway. Also, as luck would have it, the Fruinian markets opened in January 1960 and Fruinian gentleman racers found the Triumf to be an attractive proposition as well. The opening of the Fruinian market was also essential to secure a steady supply of radial tyres. A side effect of developing the engine for low-grade Archanan fuel was that power output rose substantially when re-tuned for higher grade fuel for exports outside of Archana.

When the Triumf was ready for production, Mayster already had a healthy backlog of orders. They had to utilise their workshop space to the max for the next two years with 2 shifts with about 50 employees each. They even had to work overtime to fulfil all pre-orders, producing about 70 cars a month. Engine manufacturing was outsourced to an Archanan aircraft manufacturer, thanks to Nataljia’s connections.

Nataljia also managed to secure a surplus of yellow paint that had originally been ordered for painting the Archanan aircraft roundels on planes, but turned out to be in the wrong shade of yellow. Hence, the customer could get their initial Triumfs in any colour, as long as it was yellow. Later, this colour had become Mayster’s signature colour, and so they stuck to it as the default colour throughout the Triumf’s production run.

Right after they managed to fulfil all preorders, Mayster facelifted the Triumf in 1965 to account for an announced increase in Fruinian minimum safety standards. In the process, they switched to a 4-speed gearbox and added gas mono-tube suspension. Due to their previous success, they were able the rebuild and substantially enlarge the factory so that now 210 cars could be produced per month, even if it meant stopping production (and thus deliveries) for a few months. The subsequent continuing interest justified the workshop expansion and the 2nd generation Triumf continued to sell well.

There was also a lighter - and incidentally more affordable - version available without the softtop and the necessary structural reinforcements, a more regular quality interior and just a basic radio. Acceleration for this version was down to 11.8s to 100 km/h and top speed up to 170 km/h. 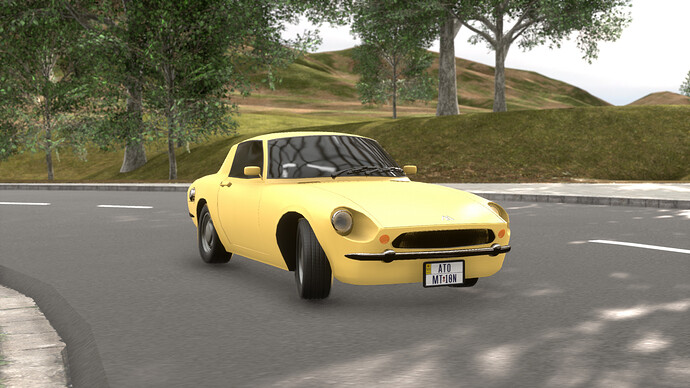 Around this time, a special racing version was produced together with a well-known Dalluhan gentleman driver, Timur Alikhanov, who had taken special interest in the Mayster outfit. This racing version got an enlarged 2 litre engine, and Fruinian carburetors, an overall more aggressive engine tune and the availability of 98 octane fuel on racetracks effectively doubled the initial power output. The interior was gutted down to the basics, racing brakes and tyres fitted, and the suspension re-tuned for the changed power and weight distribution characteristics. 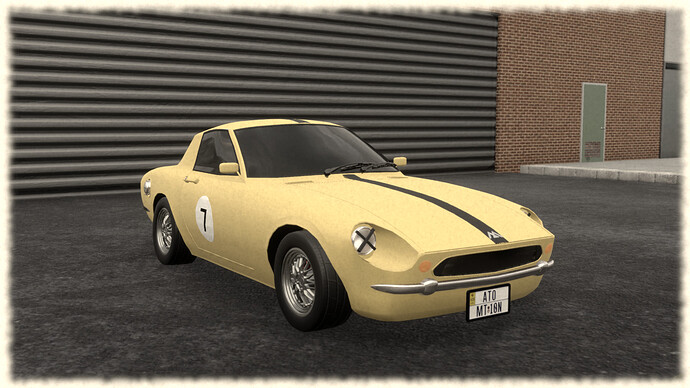 1967WR-Mayster-Triumf_F1920×1080 394 KB
A Mayster Triumf 2.0 Avtosport in sand yellow, the traditional Dalluhan racing colour (not to be confused with Mayster’s own signature colour)

A third and final facelift occured in 1975 with another increase in safety levels in Fruinia and a necessary change to the engine to run on unleaded fuel. The engine was tuned for more higher-end torque, albeit with a slightly higher redline and slightly higher fuel consumption. Acceleration improved to 10.5s and the new top speed was 185 km/h. The factory was extended further and could now be called a small-to-medium factory, being able to produce about 400 cars per month in two shifts.

Despite limited updates compared to the initial 1962 model, the 1975 facelift continued to sell in surprisingly large numbers for the overall still boutique-like operation. The market had now shifted more to the purist faction, however, since the Triumf was increasingly lacking amenities compared to the competition due to the basic construction preventing installation of advanced car entertainment or a proper manual mechanism for the softtop. The engine was also close to its developmental limits.

During the 1980, Andrej Sr’s interest in his car company waned. He had indeed managed to realise his dream and also sell it to others successfully for over two decades. His children, Andrej’ Jr. and Anya had become car engineers in their own right, both working across the lake for Mara Motors.

These connections led to Mayster being contracted to help develop a convertible version of the venerable Mara Irena, based on their experience in producing the Triumf’s softtop convertible version and keeping it available in the safety-conscious Fruinian market. While not a sales success, this assignment nevertheless paved the way for the future of Mayster.

Towards the end of the decade, an arrangement was made to finally stop producing the Triumf and - again due to Andrej Jr. and Anya’s connections - to become Mara’s factory performance division instead. Mara saw this as one piece of the puzzle to regain international competitiveness after the impending global market liberalisation.

Andrej Jr. and Anya took over the reins of the company in 1990, now renamed to Avtostudiya & Manufaktura Mayster (AMM). Despite all these changes, AMM retained the particular shade of yellow that they had offered since the first Triumf models as their signature colour.

As a last hurrah, a final run of - mostly unchanged - Triumfs was produced in 1989 for the purists in those international markets that have not been able to buy Archanan cars before. After the transition, Andrej Sr. could enjoy his retirement, still driving and carefully maintaining one of the very first cars that bore his name, the 1962 Mayster Triumf #0024 - a fitting name for the triumph of his life’s work.

In the 2020s, AMM has become a prominent sponsor of a fledgling Archanan cycling team, due to Anya’s oldest grandson deciding not to follow in the family tradition, but to seek a professional cycling career instead. 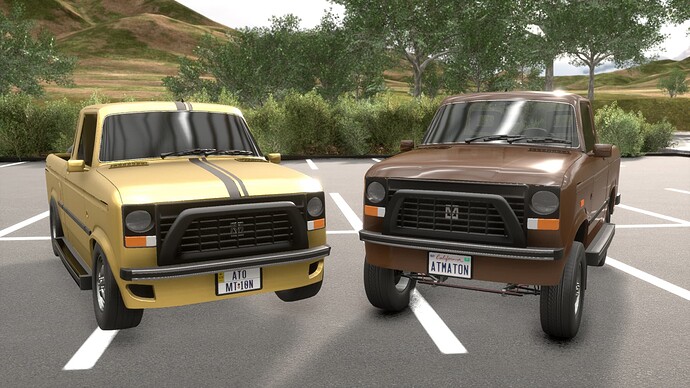 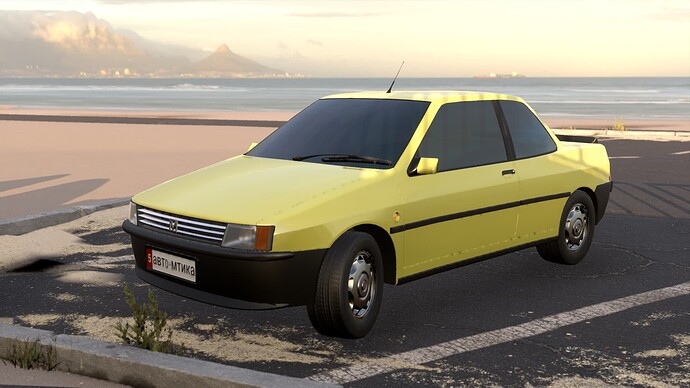 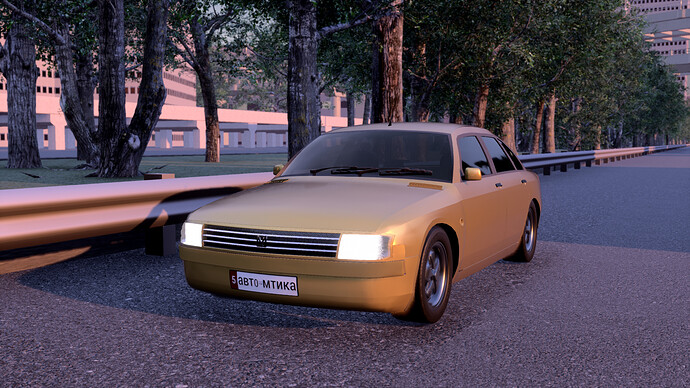 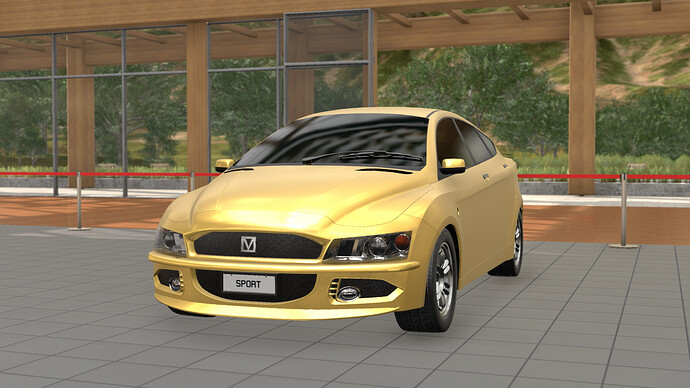 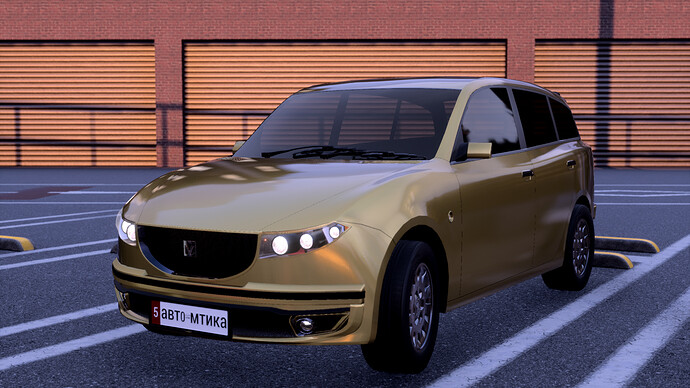 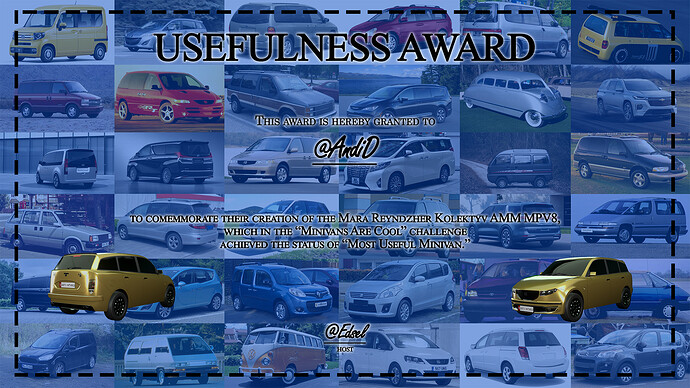 Did mayster produce individual cars inbetween the triumf and AMM?

I think I’ll keep em as single-car outfit for the time being, they seem to be quite content staying in their lakeside shed, and doing some contract work on the side later in the 1980s.

Maybe I add some more engine variety at some point (a bit like Morgan between 1950 and the early 2000s), depending on what challenges might require. However, I had actually tested a flat-6 for Tom’s competition instead of a flat-4 and I was actually slower in Beam on the shorter circuits the competition ran on.

Many of your cars turned out to be flops in competitions due to overly simplistic styling and poor engineering choices - then again, that’s what would be expected from an Archanan company which has had to work with very low budgets since its establishment. Your minivan and 60s sports car (the Reyndzher and Triumf, respectively), on the other hand, did fairly well in their respective competitions (at least in some aspects), so it’s not like AMM is entirely devoid of merit.